BTC cloud has cleared for many Alts, HIVE heading for blue skies soon?

HIVE/BTC daily chart with the Ichimoku indicators, what a sad state of affairs. Not for much longer though I suspect, as other tokens I follow have recently shown. 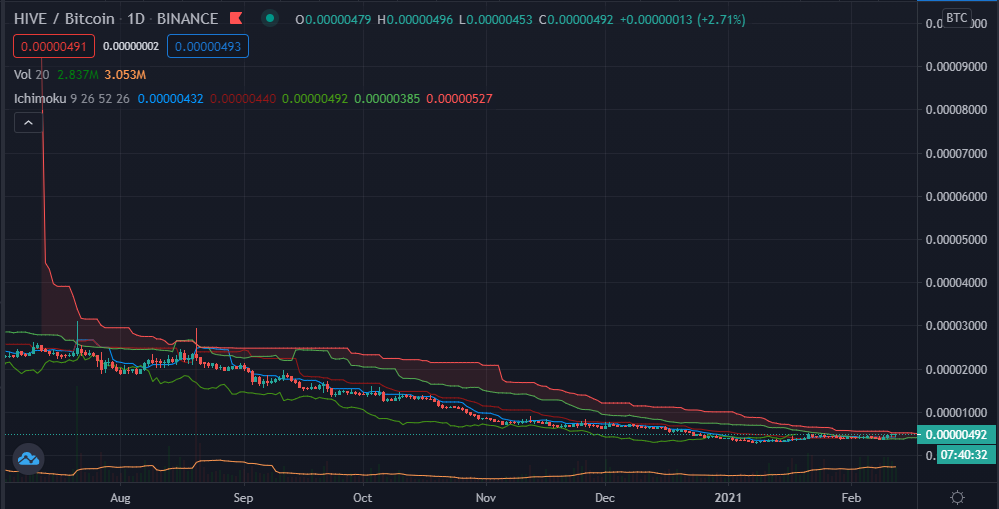 Although I have been collecting HIVE through 2020, the sensible option was to stay well clear and grab as much BTC as possible. As the previous bull market displayed, BTC generally leads the way and the rest tend to follow in $ terms, catching up with BTC in the process.

Aside from some crazy 100% days, this seems to be in marketcap order - ETH, LTC, never being too far behind BTC, and then the funds start flowing into the rest of the Alts. Just an observation, and happy to be shown this isn't the case.

As STEEM was in 2017, HIVE is seemingly fashionably late to the party. It could be that BTC marches on to 200k+ and the Alt party isn't close to starting yet, but there are some obvious signs that at least the pre-event drinks are underway. 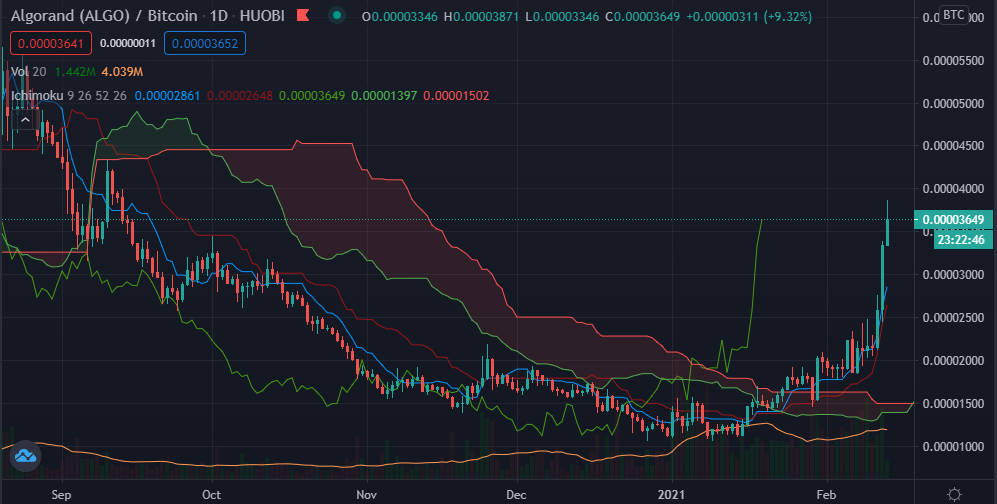 Under the weather, or the Kumo 'cloud' (which is that huge red shape in the image above) since last summer, ALGO recently glided through the cloud (Bullish but 'weak' due to the cloud being red-descending) and following a retest, has scooted up over the past week. 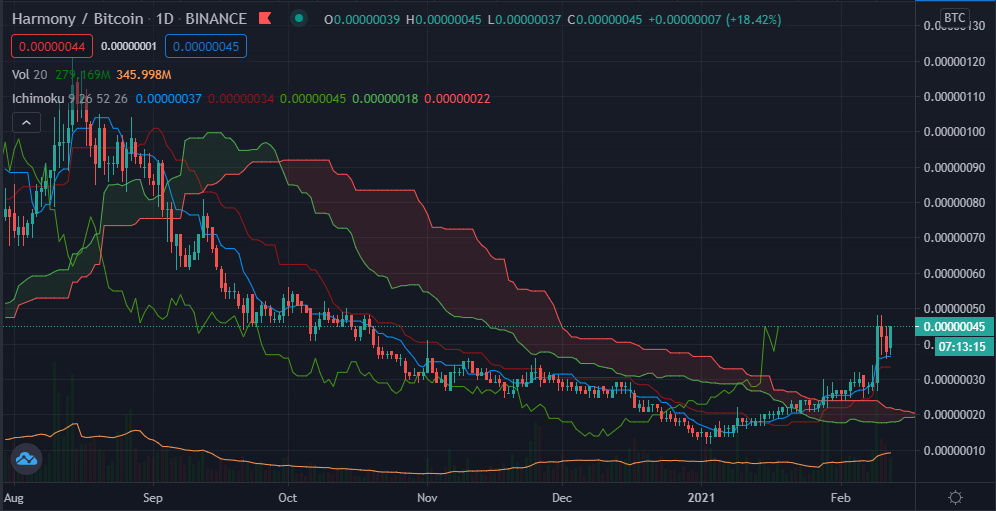 As with the previous chart, ONE spent last year suffering as BTC slowly gathered momentum. That turned at the new year and the ONE/BTC price steadily crept up before leaving the cloud and doing 50% in a day or so. 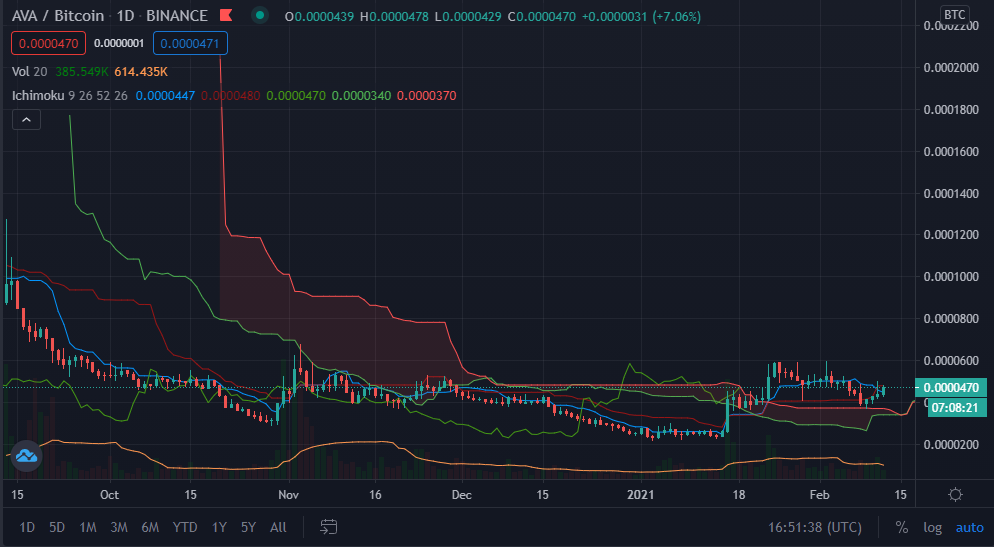 AVA/BTC is a little further ahead than both ONE and ALGO, but I think worth a mention as the Kumo cloud has recently supported the price and provided 4 good days since then. The timeframe isn't that large as to be confident of mad gains, but being above the bearish cloud looks good to me.

The first screenshot in the post shows the longer timeframe and cloud of doom, below is zoomed in to where (I hope) the action is about to take place. 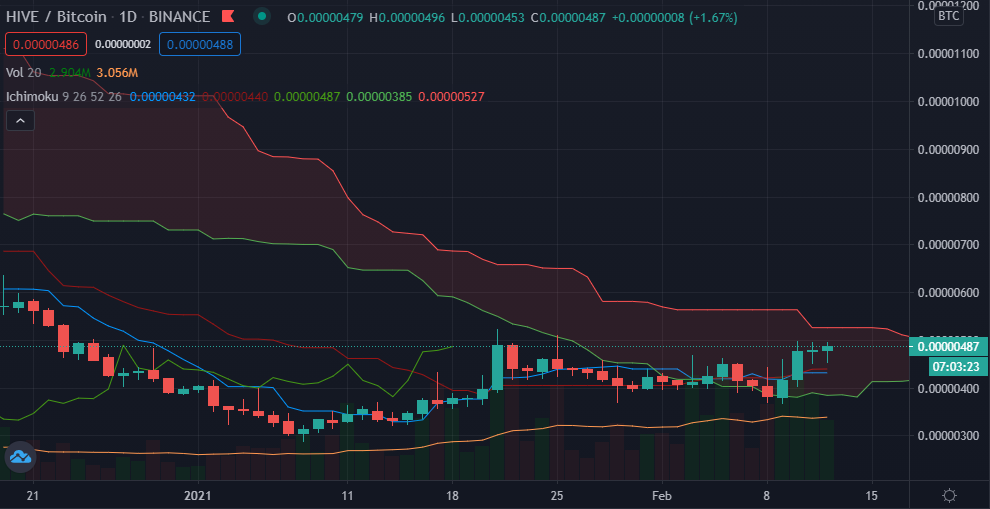 So finally, the Kumo cloud has drifted down and the HIVE price has naturally flowed into the red fog - for the first time bar 2 spikes in July and August, which failed miserably.

Along with this progression into the cloud, volume is up and the faint green bars under the candles indicate BTC coming in. To me, it looks like about a week of drifting through the Kumo needs to happen before the price sees blue skies.

I think you are guessing somewhat buying in now before the price goes above and retests as the red cloud is resistance before broken, but the signs are there, and I do like blue skies.

If you would like to go to https://tradingview.com/ and enter the ticker of a token you are following

I'll be interested and may join in the pre-drinks gathering.