Does the House always win?

A look at how kryptogamers (https://kryptogamers.com/) is doing as a 'provably fair' gambling website.

Within the date range set out above, and first removing a couple of reward/advertising sends to @kryptogamers and the account's own 'banking' sends, @kryptogamers has sent and received a total of 19,277,947.78 HIVE. This amount has been moved between a total of 375 accounts.

To me, that is a staggering amount of HIVE to have been moved around by 375 accounts. From what I gather, you can't code sends/plays, but you can auto-play once the HIVE is in your roll, and so I believe deposits to be manually made.

Based on deposits and withdrawals (and not including HIVE held in the account for gaming), this is how the players are doing as a whole. 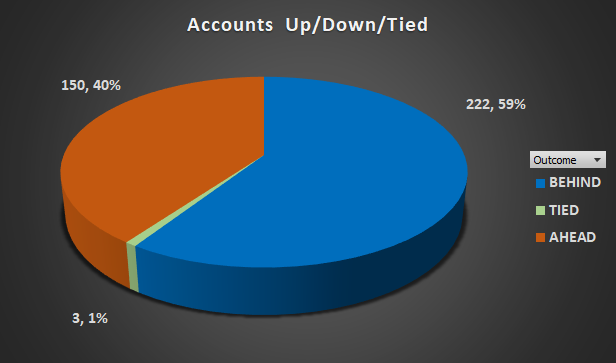 Of course, that doesn't tell that much of the story, and those that do use the site will be pleased to know that I'm not going to list any account names, unless they ask for a breakdown of their own account in a comment - I can hear them rushing to do so right now :)

It's interesting to note the disparity between the biggest winners and biggest losers. The luckiest player taking just over 4.4k HIVE out, whilst the biggest spender has given up over 50000 HIVE, ouch.

I think my favourite account is 9th in the winners list - an overall profit of 999 HIVE with over half a million HIVE being sent back and forth between the account and @kryptogamers. As long as they are having fun, right? :)

So, does the banker always win?

Whilst it is possible, as seen above, to have a bit of luck and take something from the banker, in the end, they will always collect.

Since Hive, @kryptogamers has profited approximately 231,367.376 HIVE, and that is just Hive, following the fork. The site has been around a while, and you can also play on that other chain I've forgotten the name of.

These days, I keep my funds a little tighter to my chest - my account isn't on the list, and I intend to keep it that way.