... Was a line given to me as a teenager by my late father, which has taken about 25 years to sink in. Sink in it has though, and my current income verses outgoings probably as good as it's been since I was renting a room in a house with 4 mates for 80 quid a month back in 2001.

It's fair to say I've not looked at money as something to collect, and the amount of travel, holidays, big weekends, and greenery consumed has severely impacted my savings over the years, not to mention funding a child (now teenager), I don't live with - as is required by law in the UK.

At present though, with lockdown, and other factors discussed via the chart below, I'm doing alright and hoping to keep this gig rolling for most of 2021.

The total expenditure for February is looking like just under 1000 Euros. 975 Euros is currently 887 pounds, or just a smidge over 1200 USD. 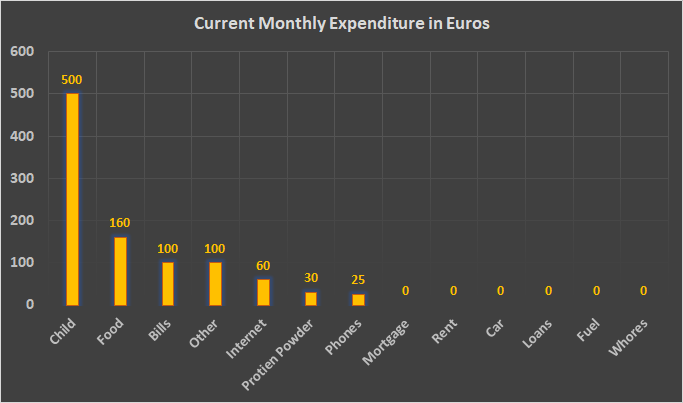 As a non-house owner with a child to cover, I think that is pretty cheap. I am in the fortunate position of squatting (with permission) at my mothers apartment in Mallorca, Spain. A small apartment she bought 5 years ago and has yet to live in. Not only that, my work recently agreed (and just in time too!) to give me the opportunity to trial working fully remote, in a country where they have no business presence.

I see this as a golden opportunity to collect some fiat before either the trial ends (should be OK if I can make it legal), I can't get residency, my mum kicks me out, or something else I've not thought of, whilst I earn GBP and get an hour in the sun at clocking off time.

As you can see from the chart above, the main outgoing is Child Maintenance. I will occasionally bitch about this cost, but understand it is mostly fair, even if the person I pay lives in a 4 bedroom house and drives a BMW. In a few years the legal obligation ends, but no doubt I'll be coughing up cash to fund clothes, wine, etc. - at least it will be paid direct.

Without rent, a car, any loans, additional taxes (until April), fuel, and bought ladies, next on the list is the essential item, Food! 40 euros a week is ample if on a tight budget, but this allows for the odd salmon steak and bar of chocolate.

Bills are next, and with 100 euros I can cover gas (almost nothing), electricity and water. Working out each day means a second shower - more electricity and water, but I'm willing to pay not to smell my pits all afternoon. There is the shower by the pool, but screw that at this time of year (although could be an option from June to September) if being a total tight-arse.

Other expenditure covers wine, beer, bog-roll, lightbulbs, Amazon Prime, and more items not worth categorising. I'm not drinking for much of the week, although by Thursday the brew is calling, mostly in the form of a bottle of 3.89 red at present - not really blowing the saving plan at that price. The same bottle is close to 9 euros in the UK!

Internet, and only 4g at that is a bit of a pisser at present. These apartments are old and were somehow dodged when the cable van visited the area last year. I'm hoping to half this cost and 10x my connection speed in the next month or two.

Next up, protein powder! Two packs last me a month and Amazon deliver for free - minus the monthly bill. Powder is cheaper than eggs, egg-whites, tuna, and pretty much any other core protein source, plus they taste alright and are the main constituent of my breakfast - I would pay double.

My fairly new phone, the Samsung M31, has a kickass battery and two sim card slots. I pay 10 quid a month for a UK card, and 10/15 (based on previous months usage) for the Spanish sim. for a total of 24 GB of data and free calls in Europe, I am ok with this total.

So there it is, my monthly costs - which I consider to be pretty good going for the western world. I think I'm currently in quite a fortunate position, and hoping to make up for many years of not looking after the pennies.