Leofinance engagement is now double that of any other Hive application

I've seen people talking about engagement on leofinance posts recently and how it has increased dramatically of late.

Has it? Or has been leading the way for months now?

With the price of HIVE on the slide, you would expect to see engagement falling blockchain wide - there are many reports, past and present, of posts/comments having a strong correlation with token price.

To some though, this is the best time to get stuck in and collect more tokens, HIVE and second layer tokens, with the hope of an increase in price at a later point in time.

While HIVE has slid in value for months, LEO has done the opposite and so you would expect more posts and engagement. There are a couple of other factors that I think have have influenced this, if it is indeed the case.

I'll mention that the LEO community is quite small and the larger stakeholders / management need to not go rogue to make 'flat curation' work. If this change was made on Hive, it would likely become a shit-show to police as the 6th day 'upvote your own comment' brigade would likely appear.

Anyway, onto the numbers!

The table below shows the top 10 applications, ordered by Posts created. It's not surprising to see peakd and hive.blog at the top, although there is a fair difference in the average number of comments on the posts produced by the leading posting applications.

actifit is 3rd in the rankings, but I believe they add a comment to each post that reaches minimum step requirements.

Looking at the final column, and scroll down to the bottom there - leofinance averaging 5.67 comments per post produced via their application.

So has the average been bumped up recently, or has finance and leofinance always done quite well as far as engagement? 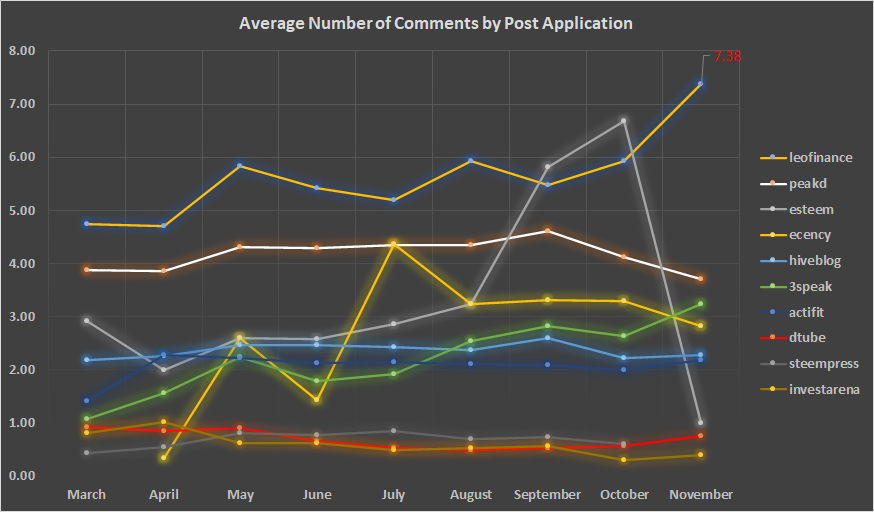 Since the birth of Hive, leofinance has scored best on average number of comments per post in all but two months, closely beaten esteem on both occasions, which I think is now ecency. Most applications have remained static or seen a fall in recent months, this is not the case for leofinance. With the switch to flat curation happening only recently, and larger stakeholders hitting decent comments with votes, you would expect the average to rise further in coming months.