Your Hive Vote Weight Distribution and Thoughts on Network Growth/Health

Some thoughts and numbers on the voting of the different user classes - my chart, your chart, and the charts of various curation initiatives.

Below are my outgoing votes on Hive (21st March - 1st June 2020 inclusive) by weight, grouped into account class/size. 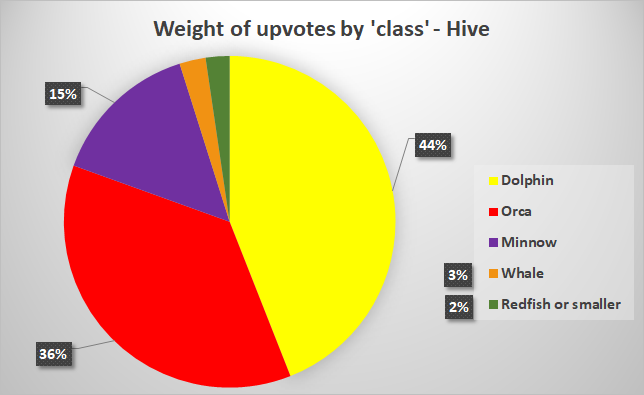 So why have I given more vote weight to Dolphins than Minnows? And, this doesn't sound right, more weight to Whales than Red Fish and lower? 😨

I could mention here that my chart didn't look like that in the past, and that the accounts I have voted for over the past few years have grown with me to Dolphin and Orca - Most accounts have a circle of friends, and as long as that circle is wide (no official statement on how wide), this is generally considered OK.

Is it OK though, for the good of the platform? Looking back at the active accounts and their % as part of the whole, Red Fish total 80% of the 'active' user-base, and so shouldn't 80% of my vote weight be going to this content? Perhaps not to that percentage, but you would expect more distribution to smaller accounts seeing as there are far more of them?

One set of data isn't much use on its own, and so (as well as asking if you want a chart), I decided to look at a few of the curation projects I am aware of.

@curangel accept delegations and pay HIVE each day depending delegation size and how much they earn curating. 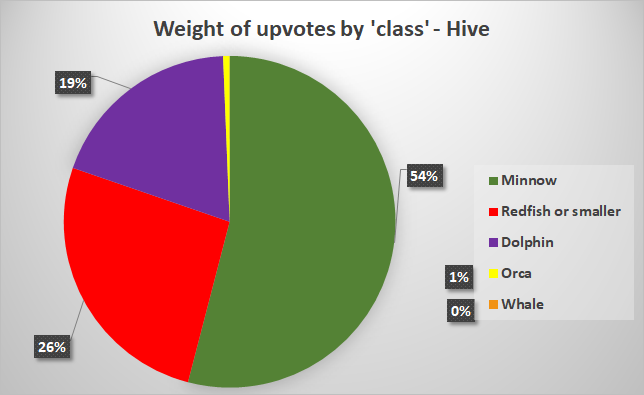 @curie are looking for delegations via https://hive.dlease.io/ and there is a fixed return percentage attached to each offer. 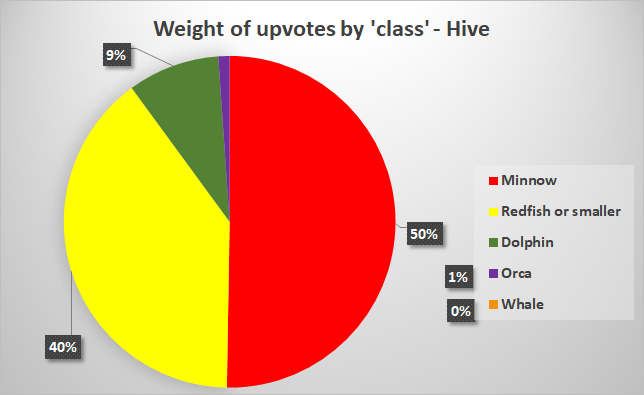 @qurator accept delegations and pay HIVE each day depending delegation size and how much they earn curating. 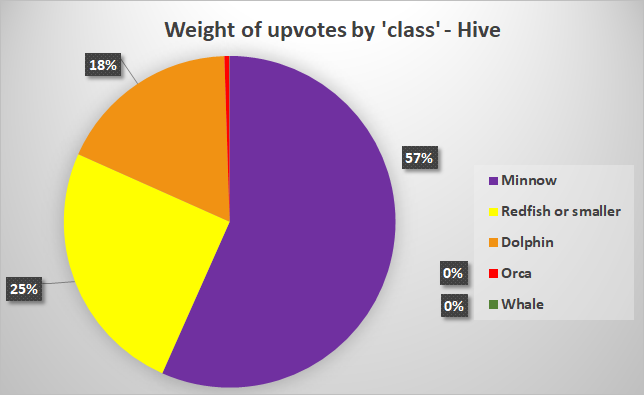 @c-squared, I think, have nothing in place to pay kind delegators (happy to be corrected here). 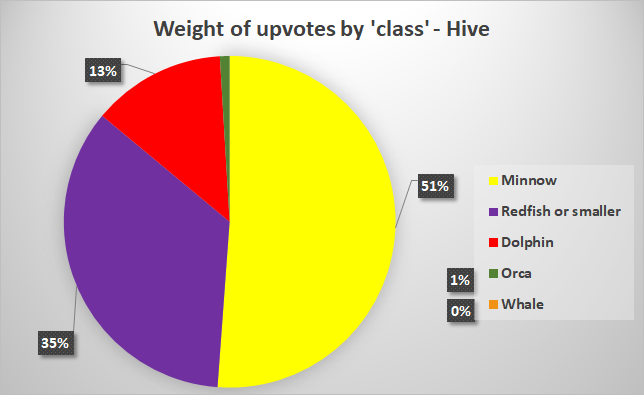 @ocdb accept delegations and pay HIVE each day depending delegation size and how much they earn curating. 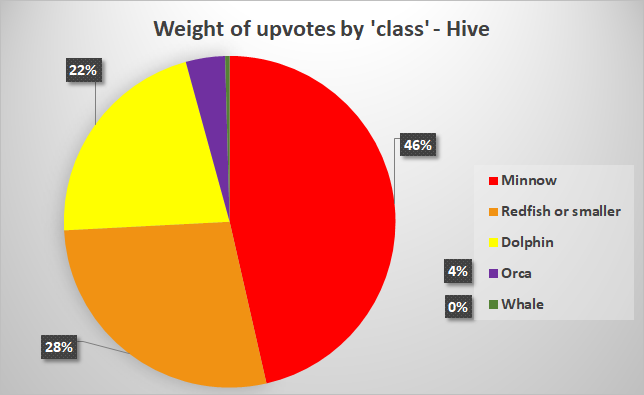 This is more like the outgoing vote weights to various classes though isn't it?

All projects favor Minnows-Red Fish-Dolphins-Orcas-Whales, in that order. Based on number of active accounts, it is a little strange that Minnows are voted with more weight than Red Fish, but the fact that this is the case from all 3 projects makes me think that the level of content could be the reason.

I know I could do better with my own voting, remove some autos and spend more time manually curating, but there is another solution (hopefully clear by now) to help sleep easier at night.

Whoops. No that isn't going to help, but one solution to help distribute your votes to new and upcoming author is to trail vote, delegate HP, and/or lease to a curation project.

For short-term ROI gainz, doing the above will likely not match the return you can get from keeping your HP and voting yourself, especially if the majority of your vote (weight) is automated.

Long term, if there isn't support for new accounts who are showing willing, and all we have is 500 Orcas voting each other, distribution will look a bit crap and likely so will the price of HIVE.

I've written before about holding your HP to help you get noticed (votes in the top 20 voters list or on comments), and don't think that delegating as a small account is the best plan, unless you are going AWOL for a period. As a larger account though, I do feel an obligation to help support curation projects, especially as my own votes are seemingly not going to smaller accounts as much as I would like.

And so this morning, I upped my delegation to @curangel to 7,500 HP, 10% of my total stake, and will try to maintain a 10% delegation going forward. Some may argue that 10% is fuck all, but if every Orca did this, those projects would have millions more Hive Power to play with.

Who wants a pie chart - hopefully yours looks more like one of the curation projects and not like mine! 🙈