Dutch farmers who have been protesting for weeks over the government's radical plan to cut nitrogen emissions by 50% - 95% by 2030 have taken things to the next level - pouring manure on government offices in response to the plan which would cause widespread chaos - including the death of 1/3 of Dutch farms.

The farmers have resorted to protests as dirty as pouring manure on government offices out of desperation, you know. According to zerohedge.com, it seems that since the plan of the government was announced 3 Dutch farmers have already committed suicide.

But others have simply took out the cows to a walk in front of the governmnet building, offering interviews, sharing their frustration and also threatening that they will ultimately resort to sacrifing the cows right there on the street. What do you think the officials had to say in this regard?

"The honest message … is that not all farmers can continue their business." 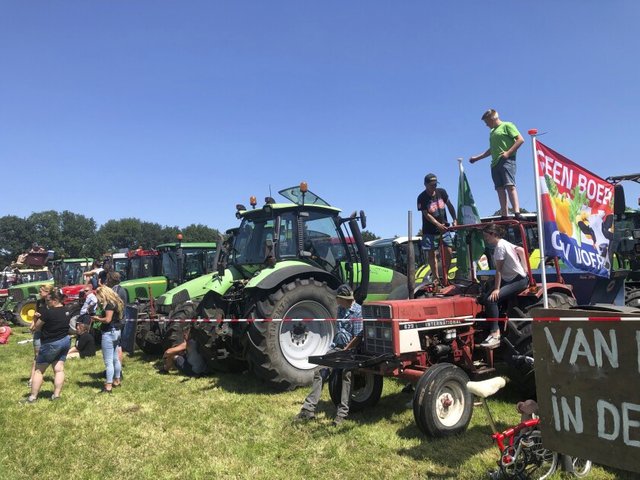 THEY DON'T FUCKING CARE, that's the message. Mark my words. 90% of the politicians, who are supposed to work for the good of us are actually being paid by elitists such as Bill Gates, pushing their 2030 agenda, who don't give a shit about us. They're simply following the steps of accomplishing their eugenistic agendas and on the way sending the world into a severe famine and chaos.

Luckily, we have protesters among the Dutch farmers, and it seems that Spain has seen a few protests this weekend as well with Spanish farmers blocking the highway in Andalusia and protesting against the increase in prices for fuel and essential goods.

Scarcity in crypto and other types of assets is good because it creates value, but when we talk scarcity for commonly used goods and necesities, then we should be expecting shortings and riots. Killing so many farming businesses in Netherlands, the 5th agricultural country in the world, means more food scarcity and higher prices will follow up.

Can we afford that? Nope... Can we afford these metan emissions or whatever is coming out of these cows that actually feed us? I'd say yes, but as mentioned above, these elitists don't give a fuck about us. I know I sound like a conspiracy theorist, but look around... It's that simple.

You know what else is relatively simple? Using Bitcoin, the lightning network, blocckhain technology and circumveting the governments. We have to do it... When the message the governments are sending us is that crystal clear, you know it's time for Bitcoin.

Many of us are expecting that some bullshit ETF will magically push Bitcoin into mass adoption, but I say these types of crisis, riots and unrest will do that. What do you think?

Too many politicians meddling in affairs that have nothing to do with them, becoming fat cats with bribes and corruption to push different agendas.

Wake up before it's too late, wars are also being planned and driven to create wealth for a handful, as always....

You're absolutely right. Governments have too much power.

If they listened to the people some of the time, who put them there, we may see change. As it happens of late greed, self-importance, none listen!

Are you from Holland as well? It is getting really weird at the moment I think. With stuff not coming out of Ukraine (grain/corn/wheat) it feels in every inch that we should be more self reliant and all of a sudden the decision to pull those these decisions through is actual again? I really don't get it.

Sure it seems reasonable that maybe not every farmer should continue their business because a lot goes in to export, but why not gradually make it smaller and more for Holland itself instead of importing.

The most of these farmers are family businesses passed over by generations. Not a good thing to shut that down all of a sudden.

Im curious on the hidden agenda in the government

I'm not from Holland and I don't have any doubt about the agenda.

Who needs agriculture? Just 3D-print the damn food and problem solved. In 10-15 years nobody will remember what natural food tasted like. God, what future awaits us...

I'm not excited about the future in this regard at all.

Is this a manufactured food crisis?

Looks like there is a more important agenda than food security for everyone.

Governments are the ones really committing suicide these days and I couldn't be more happy about that. I sincerely believe there is no such thing as a good government. I am also terribly saddened by those affected by this nonsense, such as these farmers and everyone throughout the globe that is suffering because some humans think they can control other humans.

The great news is that we are living is what is likely the most transformative time in human history right now. We have the tools to out compete governments. We are also seeing just how silly the concept of letting "authorities" tell us how to live is.

The mainstream structures that have created this un-holy behemoth such as government indoctrination centers (schools), as well as banks and media are all being seen for what they are now. We have the tools for real change now and they cannot hide in the shadows as they have for all of history.

I can only hope you are right. Honestly, Bitcoin is the only thing making sense and perfectly designed to disrupt these crooked governments.

I would argue that Monero and Hive have better feature sets, but that's just me being nitpicky.

Either way, we do have tools that really are changing the paradigm.

What next? Ban Oxygen emissions? It's already beyond reason.

Anything you can think of.