Ethereum, The Most Expensive Blockchain To Use. Why? 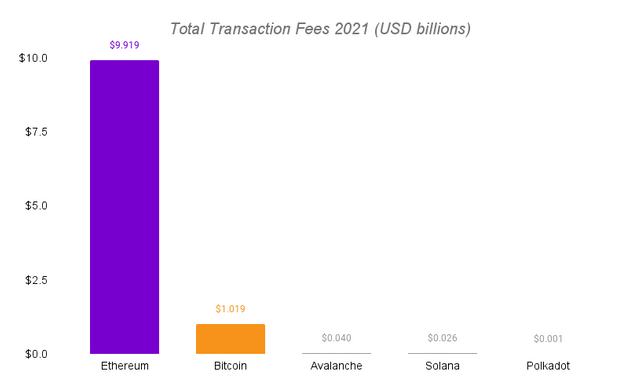 That's what I paid about a week ago for something like that. Ethereum is the most expensive to use blockchain, as you can see for yourselves from the chart above and there's nothing to do about that, except of avoiding using it as much as possible. It's what I'm doing for a while.

But why are people paying that much to use Ethereum?

They have to... Ethereum is one of its kind and whatever came after it was pretty much a replica of this blockchain. But it was the first as such, to be used for building all sort of apps, DeFi included and most of the times, to be able to get involved in such trends, you have to pay the price.

It is also the blockchain with the most developers and these are for sure earning good, thus they're incentivized to build more. That doesn't mean that Solana or Polkadot are not catching up, but for now, Ethereum seems to be ruling.

The search for an Ethereum killer is in play for quite a while, but looks like no one has yet found the trick to beat it at its own game... I don't know if Polygon, or Solana, have simply been "switched off" a while back after some hack. When did that happen to Ethereum?

I know, Ethereum Classic is "the real Ethereum", but so far no other wanna be blockchain has managed to dethrone it. I hope one day Hive will, but we'll have to see about that.

Not all of these who have added to the $10 billions paid in fees for the year of 2021 to the Ethereum blockchain have been forced to do that. Some just wanted to be in NFTs and they paid the price, for both minting and transacting. I guess high fees are one of the main reasons we don't have a play to earn game on Ethereum yet.

I see this situation as temporary though. Sooner than later we will have Ethereum alternatives, projects that won't need to be switched off, like Polygon did. Meanwhile we will have to deal with that and appreciate at the same time the feeless transactions we have on Hive.

Ethereum seems somehow prehistoric, for being that slow and expensive to use. Vitalik keeps on postponing ETH 2.0 and who knows how long will it take to make that happen. I guess not even he was seeing the insane fees we have to pay to be able to use the chain, years back when he was saying that $2 in fees for a Bitcoin transaction is insane.

How about $10 billions in one year, while Polkadot has costed its users only $0.001 billons. What do you think of that, Vitalik?