Immune to downvotes? What about "a ban button"...

I guess there's no place on earth where you won't find idiots trashing other people's ideas, work, or freedom of speech, and Hive is no exception. LEO is gradually attracting such scumbags as well as @steem-bootcamp is here to prove us. This nonsense of a man, all he can do is to trash people's posts with his puking comments saying hive is shit. 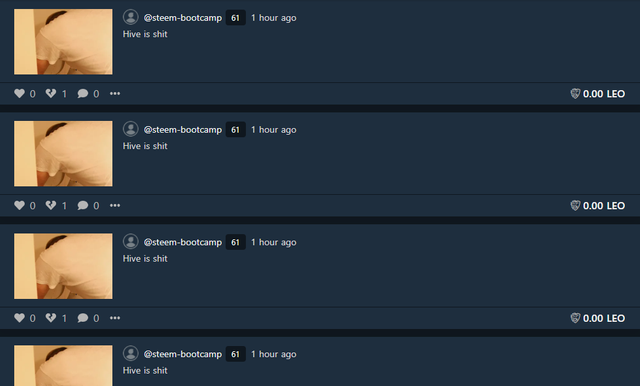 He even rebranded his own account name to hive is shit, but the only shit that's obvious here is the one in his head. Otherwise why would he spam so aggressively that many posts on leofinance.

I wrote to him on one of his comments and downvoted him, but all that I got was a comment alike on my post as well. I guess I deserved it for spoiling his fun... but I will continue that as long as I'll have downvoting power at hand. Spam is one thing that annoys me the most on such social media networks and was really hoping for leofinance to keep those bastards away.

The more success it gets the more seems to be attracting new creeps like this one. From what I remember, on other communities you could report folks like this one to the admin of the community, although don't know exactly what the admin could do to such users.

If I were in the position of deciding this guy's faith in the leofinance community and have the tools at hand I'd definietly ban him... or mute him somehow. I know that Hive is decentralized and we have freedom of speech bla bla bla, but when you have abusers like this one you realize that you somehow need to kick their asses and kick them out. I don't know how, but I hope @khaleelkazi has or finds a solution to keep the platform clean from spammers and abusers.

Have a great Saturday folks and see you to the next one!