"No Al Bitcoin"... Or How Not To Mass Adopt Bitcoin

The mass adoption of Bitcoin as a world accepted currency is something that many crypto enthusiasts, investors and developers have been proponing for quite a while. Well, it happened in El Salvador and its citizens aren't thrilled at all, they're actually protesting against Bitcoin.

It's hilarious to even read about individuals protesting about Bitcoin, but I'd say they have a point in here, as the quick adoption of an El Salvador law declaring Bitcoin as legal tender has been poorly received by the country's citizens.

El Salvador kind of rushed its "mass adoption for Bitcoin as legal tender" and it got 77% of the country's population rejecting Bukele's law and as always volatility has been brought to discussion as a drawback for Bitcoin as a suitable accepted currency for businesses and individuals.

"Despite the fact that a bill must normally go through a strenuous process of study, consultation, and adaptation, the Bitcoin Law was approved in less than six hours from the time Bukele officially presented it to Congress."
source 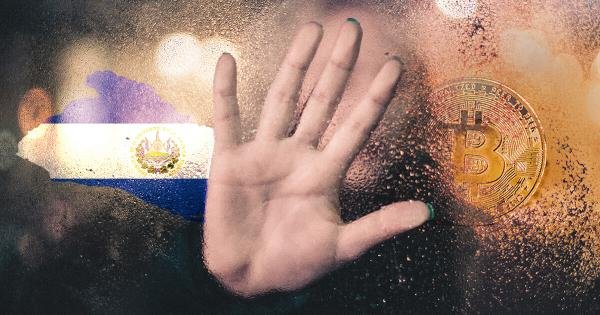 "Block of Resistance and Popular Rebellion" has protested in El Salvador recently against Bukele's Bitcoin law making the currency legal tender. I guess this is the first protest in the world against Bitcoin that I have ever heard of. I know, bankers and other governmental organizations are somehow protesting and being against Bitcoin as well, but they're of a different breed and have different tactics.

The El Salvadorians have gotten on the streets with banners saying "NO al Bitcoin", which in translations means "No to Bitcoin" so, you kind of rushed things, Bukele...

"It is a law that generates legal insecurity and that could be used to defraud users and also facilitate money and asset laundering."

That's a narrative that we've heard before, it's nothing new, but my take is that the real fear those people have is against volatility, especially during the times when price of Bitcoin is falling and also the fact that a lot of them probably don't have the understanding to use wallets and blockchain technology.

The law will be enacted as of September and probably by that time the price of Bitcoin will grow higher, maybe even getting to "pre bear run levels" :).

Bukele has definitely rushed this thing into his country and despite getting in the spot light of many media outlets around the world, at the time of announcing his plans, he's definitely got it wrong. You don't mandate Bitcoin in anyhow as Bitcoin was not created to be used as a tool of force on anyone.

I would have taken a different approach if I were him. I'd better launch an education program first, pass a law that makes Bitcoin an alternative currency for however wishes to use it as such, encourage miners to move to the country and so on, but not make anything crypto mandatory. It was supposed to be a choice of people towards an alternative currency that's supposed to be better than the dollar or other currency.

Since all sort of details are coming out of El Salvador lately, regarding how Bitcoin is mass adopted over there, I'm thinking that it's not the right way to do mass adoption for crypto. Let people choose and stimulate them to educate themselves on this new type of technology instead of obliging anything. That's how I see it and that's how I adopted crypto in my life...