The most bullish forecast for a HIVE dollar valuation that I read about so far is the one of @nathanmars. The biggest marketer of Hive on twitter that has ever existed has a few days ago tweeted about a $100 HIVE and I came soon afterwards with a post asking you guys how high do you believe our beloved's blockchain main token would be worth by the end of the bull market.

Most of the answers I got were for something around $10. I tend to believe as well that HIVE will be a $10 crypto in this cycle. It's a new project with a lot of use cases, working almost flawlessly and having basically no transaction fees. Being at the same time a platform where content creators are monetized for their work and the foundation for plenty of communities of all sort.

We have often times read about ETH killers and how Cardano or many other similar blockchains are working their way to take down Ethereum as the second largest cryptocurrency by market cap and also as the blockchain of DApps, all DApps. Ethereum is a decentralized blockchain with over 3000 apps created on it, the metamask wallet included, and it was the foundation of plenty ICOs back in 2017.

We're in 2021 and Ethereum the way I see it is no longer the blockchain for all, it's gradually becoming the chain for the rich as gas fees have skyrocketed and despite all sort of announcements regarding future upgrades that would bring gas fees a bit down to earth, the cruel reality is that you really have to pay exorbitant fees for basic transactions on this chain.

A few minutes ago I got myself on my metamask wallet 0.02 ETH and 99 AMPL withdrawn from Publish0x as rewards for my content. The idea of withdrawing these coins to metamask was to use it in order to exchange AMPL for ETH as AMPL is not listed on so many exchanges that I trust and had no idea of a better option to do that. Hence I hit the swap button, was prompted with the message regarding this process and found myself looking at the screen just like a deer in front of the car lights at night when saw the fees.

Estimated network fee: $48.73... I don't even have that much ETH on my wallet to even cover the swap and even if I had I wouldn't do that. That's pure robbery. Honestly. After so many years of existence, with that many blockchains around which basically charge cents or mere dollars to transact waiting to grab attention from DApps creators, Ethereum is still rolling such fees, then it deserves to be killed. 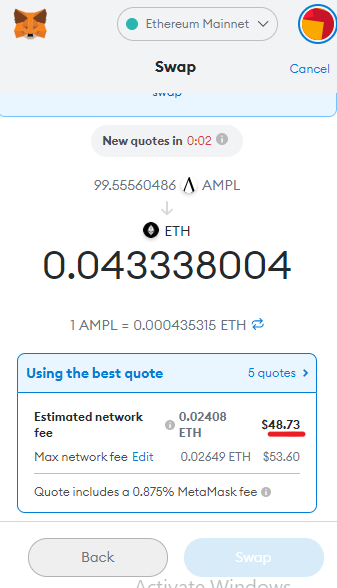 And Hive should pull the trigger. Not only that Hive is damn fast, when compared with ETH during its glorious days, but it's damn cheap to. It's basically free. From my little understanding of how this blockchain works under the hood, we're basically paying fees for transacting on this blockchain through inflation. Ethereum is an inflationary blockchain as well, but it's all so a killer.

It kills small transactions, small users like myself and when comparing it with HIVE, I basically see no reason why Hive wouldn't be the second blockchain listed on coinmarketcap and its native token to be a close to $1,000 one. If we agree that Ethereum is no better than Hive from a fundamentals based point of view and we take into consideration the total circulation supply of both cryptocurrencies and the current price of ETH then HIVE should be worth $1,000.

It's that simple and it's honestly painful do to small transactions and swaps on Ethereum. If its devs and whoever works on the developments of this chain won't come up with solutions for lower fees then it's going to become a rich users blockchain and no chance of ETH ever overtaking BTC on the markets as some are dreaming of. Or it will simply be killed by other blockchains.

If anyone of you has a better option to recommend for exchanging my AMPL to whatever so I can send that to Binance, except gate.io and kucoin as I have had quite bad experiences with both of them, then please share it in the comments section. I would highly appreciate that. What do you think by the way, based on fundamentals should HIVE be a $1000 crypto right now?