The Sweet Flavor of Instant Gratification

Art is often times as the deepest expression of the soul, whether music, painting, sculpture or writing, such forms of art are soul touching and there are paintings for example that have become pilgrimage hot spots. Mona Lisa of Leonardo da Vinci is probably one of the most expensive paintings in the world, at over $2 billion valuation.

What makes this painting almost touch the total market capitalization of LINK for example? Some critiques and art lovers are saying that its history and story behind the painting is what makes it that valuable and what brought it at the art gallery of Louvre.

The concept of digital art is relatively new to the public, but it's definitely the future of art and despite the reluctance of some art seekers towards such forms of expression, it's here to stay and it's also gaining traction on the open market of its consumers as well. Such works of art such as "Everydays — The First Five Thousand Days" of Beeple have been sold in the form of a NFT for close to $70 million.

$70 million is not even 5% of what Mona Lisa is valued at, but that doesn't meant that its current price, settled at a Christie's online auction can't appreciate over time. There are already talks in the crypto space that some of the first released NFTs will be valued much more over time. 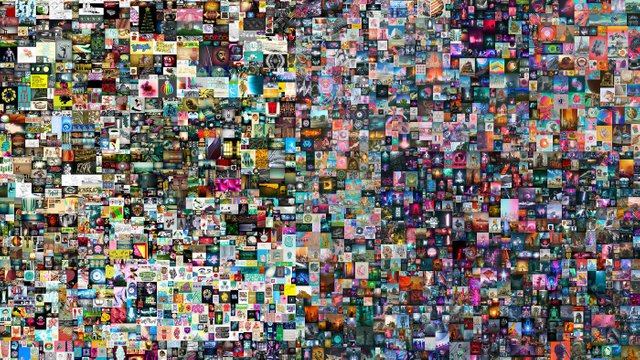 It took Beeple 15 years to create this artwork, he minted it as a NFT a few weeks ago I guess and it has been sold for $70 million. This guy has cashed in quite a nice sum for his artwork I'd say and his 15 years of work and dedication are well paid, but what about Leonardo da Vinci, has he tasted the fruits of his work? I doubt he's done that...

Mona Lisa is an over 500 years old work of art and it's become such an expensive painting after centuries of existence and adventurous times. NFTs, which are a blockchain product relatively new to the space, are turning artists into millionaire over night and this trend is also benefiting from the crypto space favorite attribute which is exponential growth.

I bet it was really hard to get recognition as an artist and monetize your works of art back in the days when Leonardo da Vinci was the man, or Salvador D'Ali, but we can't say the same of the crypto times we currently live in. Monetizing one's proof of brain, or proof of creativity if you will, is way more accessible and almost instantly rewarding nowadays.

Instant gratification is now possible and it the case of well known brands, individuals included, is more than profitable. All sort of things are minted as NFTs on the blockchain right now, from digital art such as the one of Beeple, considered by some as a mere JPEG, to digital socks and even Playboy magazines.

The internet has taken humanity into the speed era and blockchain is taking it to Mars. The subjective value of digital artworks can be an almost endless discussion topic, but monetizing art these days, blogging included if we could consider such short form of content as a work of art, is way more at hand, rewarding and safe than it used to.

No one will probably even try to fake "Everydays — The First Five Thousand Days" and it's basically impossible to monetize any such try, you can't fool blockchain and you don't need middlemen for almost anything that you can imagine on blockchain. You can have smart contracts for music minted as a NFT and every participant can take his corresponding share automatically with no need of a middle man and it all occurs in literally seconds.

Blockchain is still in its incipient stages, but man what a future does it open up and what almost infinite perspectives do its users have. So, what Mona Lisa and "Everydays — The First Five Thousand Days" Have in Common? They're both proof of creativity the way I see it and that's where their similarities end. Getting to understand blockchain technology and its impact on the world doesn't require a sort of a schooling, but mostly vision.

It shoots way higher than what history has so far taught us, uses whole different bullets and its weapons of mass destruction are no longer under centralized control. Have a great day people and see you to my next nonsense post.