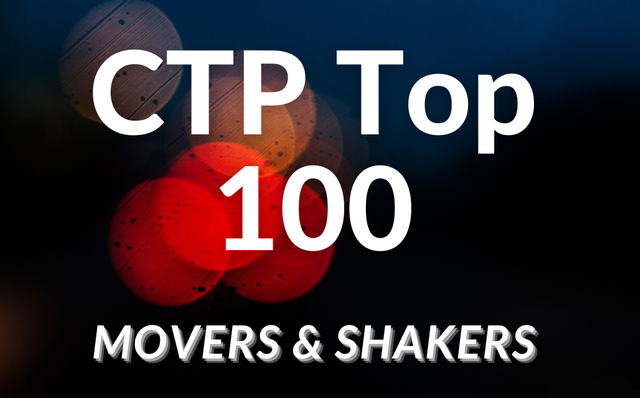 The movers is those that have moved the most places forward on the list. The shakers are those who have made the biggest positive percent change on their amount of CTP tokens. The reason I use percent change and not amount change, is because it features people that have increased their amount of CTP compared to the amount they had. Because it is an achievement to be able to go from 1000 CTP to 1500 CTP since it is harder to manage to earn it than for a person having 30000 CTP going to 31000 even if that is a bigger amount. This will help feature people that maybe are not so often thought of but are still doing great. To be counted among the movers or shakers you have to stay in the top 100.

This week there is a new list Top 10 stakers,
it lists how much has been staked the last week by them in CTP.
The same rules goes for this as the other lists.
There are two accounts sharing the 2nd spot among the movers.
There are two honorable mentions in the shaker list.
And one new account joined this week.