NO Financial Security in POB Investment

POB Tokens are NOT safe

The following post is my personal opnion on POB token, where I did make a small investment couple of days back, and was looking to make substantial investment, similar to my involvement in several other hive projects like Splinterlands, Leofinance etc. This is not a financial advice, as I am not a certified financial advisor. You must do your own research before you make an investment and continue to do so, as you have invested in a product. I have done some of that over the last few days and this is my personal opinion. It is going to be both social and financial in nature, so I am posting in Leofinance, where I frequently post.

For those who do not know me, I am with hive (previously steem) since Jan 2018. I consider myself an activist investor. I have battled alongside the witnesses, and the rest of the community during the hard fork from steem, and I stand by our Hive project till date. I have invested substantial amount of money in multiple hive assets, both on the first layer and on several projects in the second layer. Also, most importantly, I have also invested in many talented people, I will not mention their names, but they are not one or two; and I am proud of their acheivents. I think as a social network we have potential, but we are yet to realize it. I actively work with the hive core team on betterment of this blockchain. Since, I am not a developer, I can't do blockchain development. My involvement is mostly on the goverance side based on my stake. I am not in hive for any direct financial gain. My entire crypto investment is a small percentage of my net worth. I am in hive to see the success of an social experiment and to participate in a grass root level Venture Capital project on the blockchain. I am happy and fortunate to be here.

With that personal background, I was approached by several members of POB tribe to look into reward distribution at the tribe. I knew nothing about the tribe, perhaps a month back. I just knew it is just another hive-engine token. There are thousands of them perhaps, and only a handful of them with any use case. This is very standard in crypto. Perfectly normal. Looking at their trending page, I came across an account called Lucylin, which posts regular content there. I checked the content, it was not my taste, but I didn't find anything particularly wrong with it in the beginning. However, then I looked at the rewards, and the account pulls 1000 POB/week, and very modest amount from hive.

Disagreement on rewards, is a common practice on DPOS governance that we use to mitigate the lopsided distribution of token. It is stake weighted but 2nd layer tokens are immune to it. So when I wanted to adjust the reward, I can't do it on the 2nd layer (POB) because I do not have any POB stake. So I communicated the problem, and downvoted the posts. Immediately, the posts turned into rants. I mentioned that I do not support rants for rewards and if that continues I will adjust them as I see fit on the hive level, because this is the only level I have any ability to do anything.

This is a common item we hear and we try to explain. So I tried to explain in many places, multiple times and to several individuals, who just fails to understand a fundamental concept of DPOS blockchain based on reward pool system:

By this time, even the project manager of POB is involved and commenting. But unfortunately he has no understanding of how DPOS works either.

Trying to Invest in POB

At this point, I understood, that I won't be able to do any meaningful governance by staying in the top layer on hive. So I thought about investing in the POB token. I know several others have done it and looked at the basic token economics which I explained on this post below:

I made my intention clear to the project manager @proofofbrainio and even offered to purchase POB token publicly and from the secondary market. My offer was rejected, which is perfectly logical. He specifically asked me to buy the POB from the open market. So I did, and power up all of it.

At the same time, this long convoluted conversation evolved, which even involves blocktrades. I am thankful for his time. Blocktrades and I were both asked, why are we downvoting certain post? We explained. And we also mentioned, that we don't have to explain, we are doing it out of courtesy. Nothing got through. In the meantime, even blocktrade had to point out that @proofofbrainio is supporting a spammer, reward optimizer and a self-proclaimed adult-entertainer (male prostitute?). 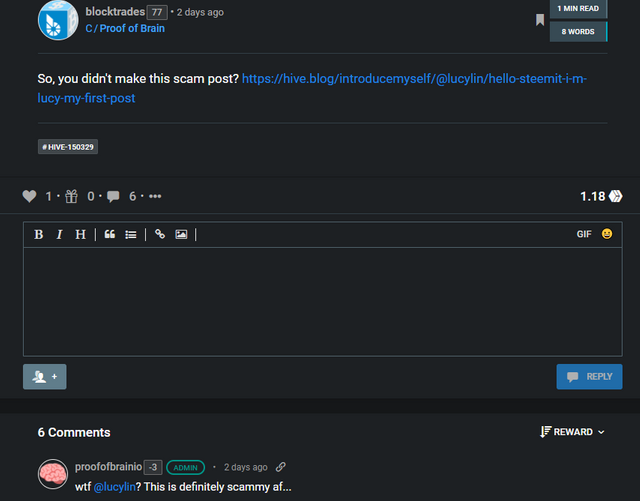 Mind you, I have nothing against prostitution. It is an ancient profession. But perhaps not very profitable, at least not for this individual. Also it is illegal in most places in the United States. From Wikipedia below:

Prostitution is illegal in the vast majority of the United States as a result of state laws rather than federal laws. ... Currently, Nevada is the only U.S. jurisdiction to allow legal prostitution – in the form of regulated brothels – the terms of which are stipulated in the Nevada Revised Statutes.

This is the comment lucylin made, I have no idea what to believe or how to believe...

Just for record (it's already on the blockchain), I (we) were involved in the adult entertainment industry for many years.
(...What some people with no actual life experiences may call 'fantastical', is 'just another day in the office' for others).

Steem/ Hive was a new avenue to explore.

Its the last segment that I am interested in. He is here, in his opinion, for additional avenue...(revenue?). This led me to believe the reason for the abuse of the reward pool.

In the meantime I have asked several people to look under the hood on POB publicly on this post:

They did! I am thankful to you all for taking the time and helping me out. We learned the main account which holds most of the POB tokens vote following a trail by calumam, and the details are as follows: 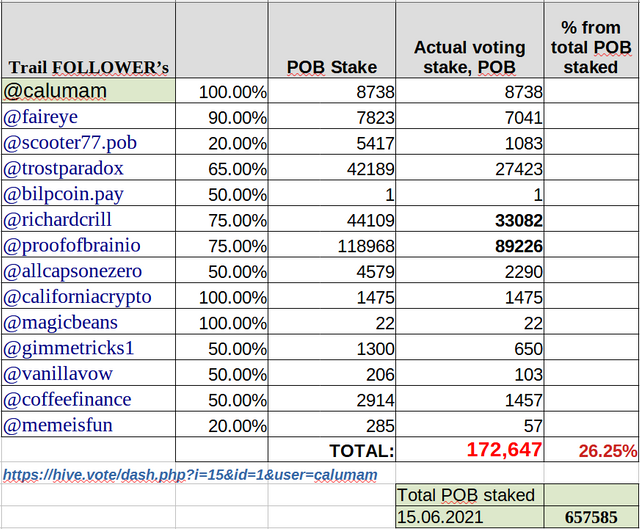 There is nothing wrong with that. But when you consider 26% of the stake going to a few account (just check POB trending to find out which) that is significant centralization. Here is how the main account votes (20% of nearly 100K POB stake goes to 2 individuals): 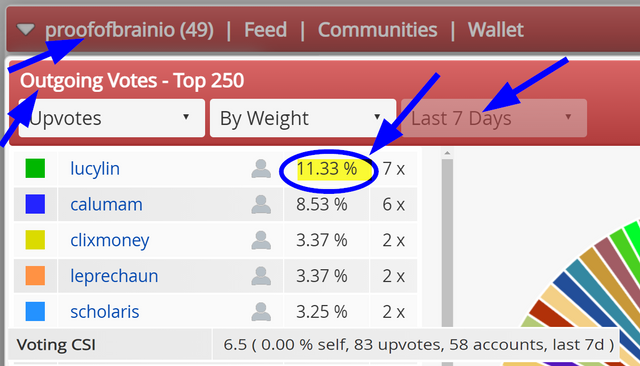 Also in the meantime, Marky pointed out the danger of centralization of these HE token, which we are all aware of, but haven't been on the receiving end. Here is Marky, the top comment on my post from yesterday:

I am not a stake holder in pob, as a second layer token with any stake my opinion is fairly meaningless.

I have not looked into how large stake holders vote on pob as there is nothing I can do about it anyway. I do however frequently report obvious garbage I come across.

In general a tribe can do whatever they want and those actions will influence if people invest or not.

None of this is new, but it must be said in this way so a potential investor can understand the danger.

I have now been muted on POB, after making one post. There is an explanation given (though not required). I did received one upvote from onealpha on my first and only post :) 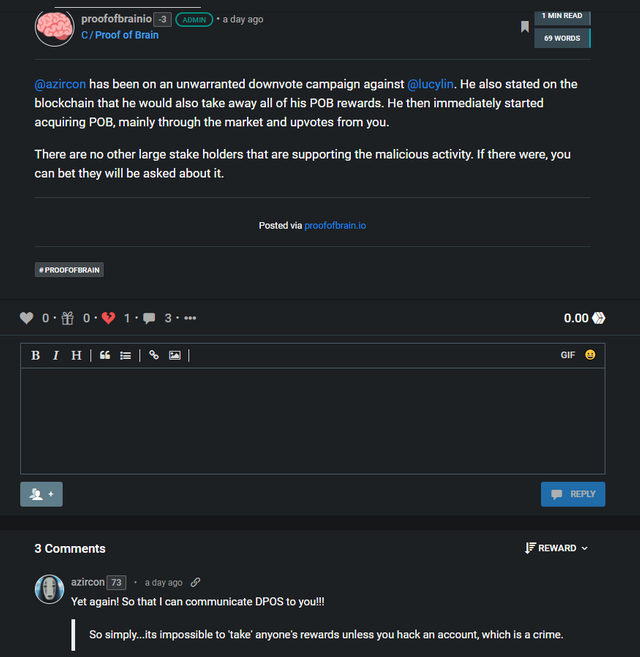 As you can see, the project manager continues to repeat himself without understanding the basics of DPOS, which is

REWARD CAN'T BE TAKEN AWAY, AS IT WAS NOT YOURS IN THE FIRST PLACE UNTIL PAYOUT

So, back to financial aspects. My 440 POB bought 2 days back is wasted. Because, I can't curate POB tribe, and my posts won't be visible within POB tribe. Obviously, I won't earn any POB token. This is a common thing in 2nd layer tokens. I have seen it used many times, effectively against spammers. But never seen it used against an investor.

Aggy, the project manager of Hive-Engine mentioned to me personally...

I have to agree with Aggy!

But I was still curious why a project manager will do such a thing to support a single individual who is a self-proclaimed male prostiture or 'adult entertainer' and here on hive for 'bit of additional revenue. So I checked on @proofofbrainio 's previous comments

My only concern as an investor in POB is that if my project manager on a centralized project has mental health problems he can take unstable and questionable business decisions without consulting his investors. Do I want to invest is such a project?

NO, I do not think POB is a project I like to invest money in.

I think my money is NOT safe there. The project is largely a spam. I will be selling all my tokens if I can, if there is any price left by the time all of you finished selling.

I have downvoted to take the rep of @proofofbrainio account to below zero. This is commonly done to a spammer. Because we do not have any other tool available at this point. That is the only way I can caution potential investors the dangers towards this project.

I have discussed this with blocktrades that his team is working on a new rep system, that can be potentially more effective than downvote. I have high hopes for that implementation. I do not think this is anything unusual that has happened to me, this is perfectly normal, and I have no regret of any financial loss. My only concern is, I do not want this to happen to any smaller honest investor.

What you do with your POB token is your personal call. This is my opinion and I have taken my personal action.