The SEC is not Crypto friendly - Coinbase wells notice is proof

The U.S securities and exchange commission are definitely not crypto friendly. Don't be fooled by its so-called "protecting the investors" shit talks. This whole thing is more about getting their cuts off every dollar bill and having full control and oversight on crypto investments. Regulations from a certain point of view may seem like the all righteous angle, but this is the 21st century, no one needs all that, financial education is a broader topic world wide, so people pretty much know how to manage their finances and are well-decisive of where to invest. The SEC can lay low, or better still back off because this isn't centralized money, it's the people money, it's a movement towards "being your own bank"

Take a look at what is going on with Coinbase. Despite being a NASDAQ listed cryptocurrency exchange, it's still placed on silly watch over, receiving well notes over a project that's supposed to bring more yields for investors, it was even better off private. The expansion of the industry is the SEC's worry, these guys don't really care about regulating cryptocurrency, it's more about cracking it down. The SEC doesn't understand crypto, blockchain or decentralization, all it understands is Fiat, manipulation and centralization. 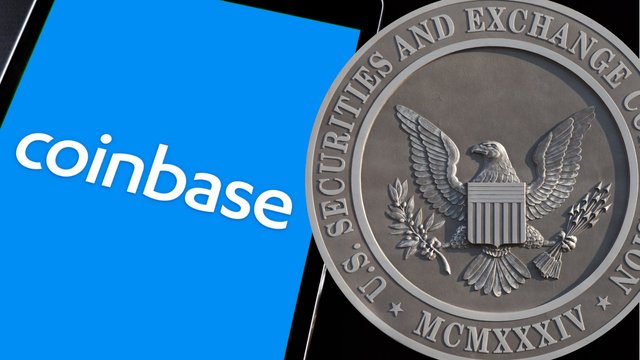 Coinbase revealed Tuesday that it received a Wells notice from the SEC last Wednesday about its planned Lend program. A Wells notice is the official way a regulator tells a company it intends to sue the company in court.
In a blog post titled “The SEC has told us it wants to sue us over Lend. We don’t know why,” Coinbase explained that it has been “proactively engaging with the SEC about Lend for nearly six months” so the notice came as a surprise. The company described that the Lend product will “allow eligible customers to earn interest on select assets on Coinbase, starting with 4% APY on USD coin (USDC).”reference

The SEC asked Coinbase for various documents, which the company said it “willingly provided.” However, the regulator “also asked for the name and contact information of every single person on our Lend waitlist,” which Coinbase said it has not agreed to provide.

It's becoming increasingly strange how strongly the SEC wants to get their hands on users' personal information. The problem holding off cryptocurrency exposure in most parts of the world is basically "life threat" Most of the population know of crypto, some are invested in it, but many can't even speak of it in the public. The authorities getting their hands on those data is a threat to crypto investors, it doesn't matter whether or not you're a fraudster in the space, everyone is inclusive. It's either you end up being taxed till your pocket runs dry or get charged for refusing the taxation. More shit loads will further be brought to the table to spice up the matters, investigations will be made and lies will be font up in their favor.

It's a similar approach worldwide. I recall the #endsars protest which occurred in Nigeria, where lots of lives were lost in the process. This all began as though authorities began harassing the youth on the streets, invading their privacy by taking control of their devices and going through it. This shit had been neutralized as the attention of the world was brought to it, but now, it's slowly coming back.

Youths are now scared to move out, especially the crypto invested ones, because the first thing you'd hear is that you're a scammer, you'd get arrested in that note, and when once you're in jail, it's gonna be left to pay outrageous charges which would likely run you down on your crypto investments. The SEC going against Coinbase is no different, the request for personal data out of Coinbase announcement of its lend program is just crazy. Coinbase is experienced in knowing how to project their services. The SEC job is to regulate Coinbase investment projects, not asking for customers' IDs.

Coinbase CEO Brian Armstrong took to Twitter to share his thoughts and clarify the situation with the SEC early Wednesday morning.
“Some really sketchy behavior coming out of the SEC recently,” he began, adding:
"Ostensibly the SEC’s goal is to protect investors and create fair markets. So who are they protecting here and where is the harm? People seem pretty happy to be earning yield on these various products, across lots of other crypto companies"

Apparently, they are harming the investors by putting a bridge to this. They ain't crypto friendly, just a body of bullies, financial bullies, the actual criminals if we're being real. This points us back to the truth that centralized powers hate to see citizens making huge gains on investments, they always wish to wheel the money back to their pockets.