CUB Finance - The One DeFi You Can Trust

If I could spend all the crypto that I've put into rug-pulls, I'd swim in the ocean of CUBs or the magical internet money as they call it. Once I heard about the CUB Finance project, I couldn't be more excited. I waited all day yesterday for the announcement and when it came, it didn't take long to start farming! 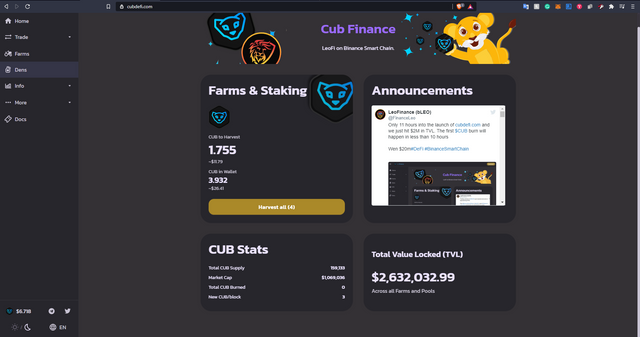 I won't go into all the details on how to start farming because I saw at least three articles about it when I woke up. The community did it much faster than I ever could. I was too excited to farm and then I went to sleep. Note that went I went to sleep, one CUB was worth about $3.5 and now it's more than $6.5!

The APY is insane! But not for long.

As of writing this article, there are fewer than 200 CUB holders. You can see it in the screenshot below which I took from BSCScan. One of the reasons is because the airdrop distribution is still in progress. Once it's out, there will be a lot more CUB holders. After that, APY will decrease because many people will choose to farm some CUB too.

What will happen to the price?

I'm certain that after the airdrop is distributed, some users will sell their CUBs and it will make the price drop. How low? I don't know. But people will take profits. Some are waiting for the price to drop to buy more CUB because they believe in the project. Some have already farmed a ton of CUB either in one of the farms or dens.

Myself? I went into a couple of pools and two dens because I feel safe doing that. I know that CUB won't rug and that's a feeling I haven't experienced for a long time. Especially on the BSC network. Thanks to @leofinance team and @khaleelkazi who are always there for the community. Knowing the success of Leo, I have no doubts that CUB's will be a success.

Even if the price drops after the distribution of the airdrop, it won't take long to recover after the crypto community sees a real project with long-term goals instead of just another shitcoin as Leo said themselves. Look at our conversation on Twitter. 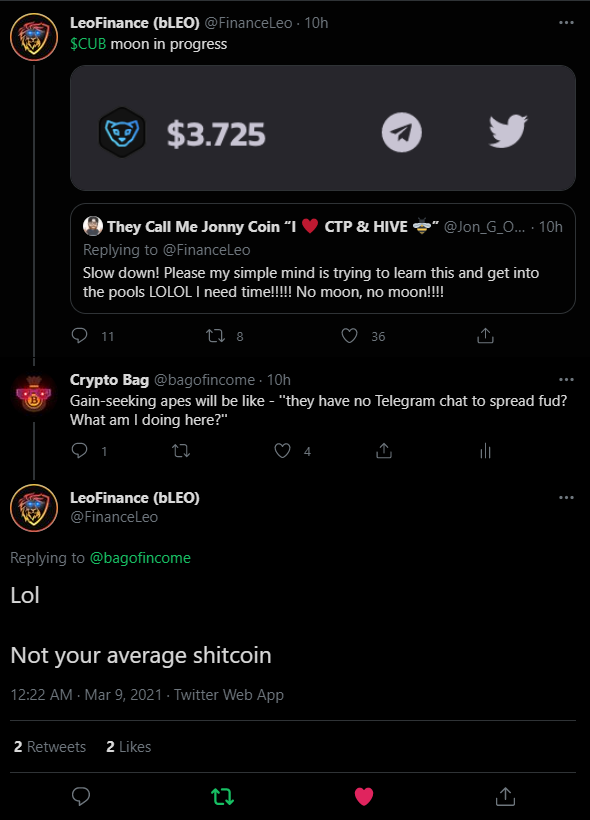 Here you can see that I'm farming in two pools (CUB-BUSD and bLEO-BNB). I think bLEO-BNB is much safer because that pair is less volatile than CUB-BUSD where we don't know what the price of CUB will be after some time. Although it's risky, I'll keep my CUB-BUSD pool active because I'm earning a nice amount of CUB.

I have already swapped some of my earnings to bLEO and increased my stake in the bLEO-BNB pool to earn more CUB. Feels great!

As I was super excited, I decided to try some of the dens too. First, I transferred a few DOT from my Binance account and staked them in the DOT den. Although I paid a 2% fee, I have already made it back. And the good thing is - earnings from these fees will be used to buy back CUB and bLEO and burn them!

My second den is a stable-coin den with DAI token. Fee here was 4% but as it goes for burning, it doesn't worry me. Earning CUB is so much fun, especially when you know it's not a rug project.

As I'm writing this conclusion, the price has already gone up and is over $10! It's a pretty nice sight to behold! And yes, it took me a long time to get this one done because there is so much going on in the market!

The end-word is that I believe CUB is on its way to show what a true community can do when they work together and believe in each other! We are going past the moon and nothing can't stop it!

ps. still waiting for the airdrop. If the price goes down, I'll probably buy more but this is not financial advice.

Read some of my other stuff:

Press on the banner below and browse Crypto Bag's website.