Everyone knows what an airdrop is. Basically, it's free money unless you get scammed. Some may think that the airdrop era is over but in my opinion, we're just getting started. Even the US government airdropped 1200$ to its citizens during the pandemic. Then a few months later they were beaten by Uniswap who airdropped 400 UNI to Uni users and at one point the value of UNI reached 8$ per coin. (400x8=3200$)

As Bitcoin goes up and crypto adaption becomes massive, we're probably going to see numbers that are much higher than that! Did you read the Paypal Announcement? They're going to launch crypto trading! And they have more than 346,000,000 users. It's big! Even though there will probably be enormous fees and you won't have the private keys (meaning it won't be your crypto), it's still a big step to mass adoption.

It's clear that after a while there will be people who ask questions. They will search and learn more about crypto and how they can avoid those fees and have access to their crypto 24/7 because we all know centralized places tend to crash every once in a while. Anyway, that isn't what I wanted to talk about in this post. 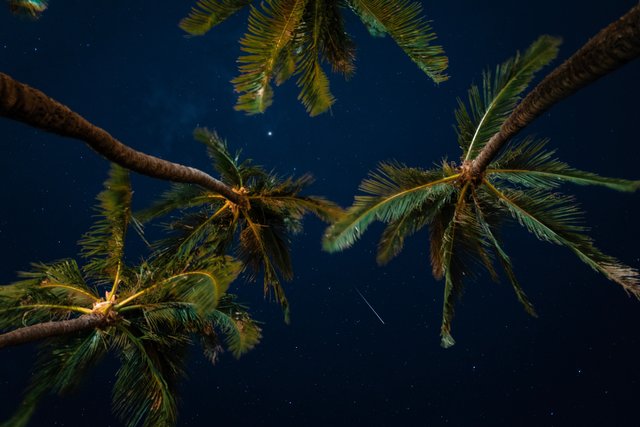 I found a site

I will share with you a site I recently found. It's called Cocoricos.io and by using it you can participate in various airdrops to receive an EGG token as a reward. It's interesting because you're also receiving the airdrop that you're participating in. It sounds like a win-win situation, right? Just like posting your articles on HIVE to receive both HIVE and LEO tokens. Double-win.

Here's their official Youtube video explaining how to use Cocoricos and what are the benefits. In short, using their interface to participate in an airdrop is much faster because every task is in one place and you can see the summary of every airdrop you joined. Now you won't have to remember all the airdrops you've joined. It's simple to track them all in one place (only, of course, if they are there).

And one more thing - if the airdrop is listed on Cocoricos, it should be legit, right? I mean, if I were the CEO of Cocoricos, I wouldn't want to hurt the reputation of my company. That's why I would thoroughly check every airdrop that I'm adding to my site. If there's the slightest clue that a certain airdrop could be a scam, I'd not include it.

I don't know if it's true but I think it's much safer to participate in these airdrops than on some of the Twitter ones. Especially those that are spamming everywhere, all the time. Those fake and scammy accounts are actually getting more money than you and I combined because people still fall for scams all the time. If Cocoricos is legit then the future of airdrops could be safer.

Here is a link to their whitepaper 2.0. It's really short - only 5 pages so it won't be hard to go through. From what it looks like, it was updated pretty recently (October 15th, 2020th).

Key facts I got from the whitepaper:

EGG will have multiple functionalities:

And a quote I took from the paper.

''COCORICOS will do much more than provide a reward and earning platform. The
platform’s primary goal is to fix and improve crypto rewarding and earning and to make
the blockchain space a safer place for all retail crypto holders.''
_ Whitepaper 2.0

Now about the site itself and my earnings so far

When you create an account and log in, in the upper right corner you can see the balance of your EGGs. When you point your mouse to i, a pop-up comes with some news that EGG is about to be listed on exchanges in Q4 2020. It means it's very close. They're also saying that they want the value of 1 EGG to reach $1. To me it sounds too much to be true but as we know, with crypto - anything can happen. 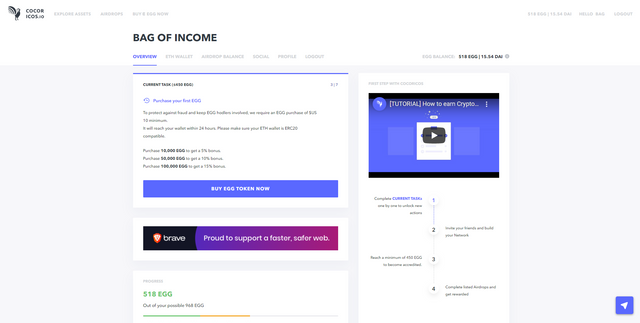 This is how the airdrop section of my profile looks. You can see which ones I've already completed and how much I've earned for each task. Right now, I completed only half of the offers but I've gathered more than 500 EGGs. Right now, the panel shows they're worth 15 DAI which is not bad, taking the fact that I'm also getting coins from the airdrop I'm participating in. 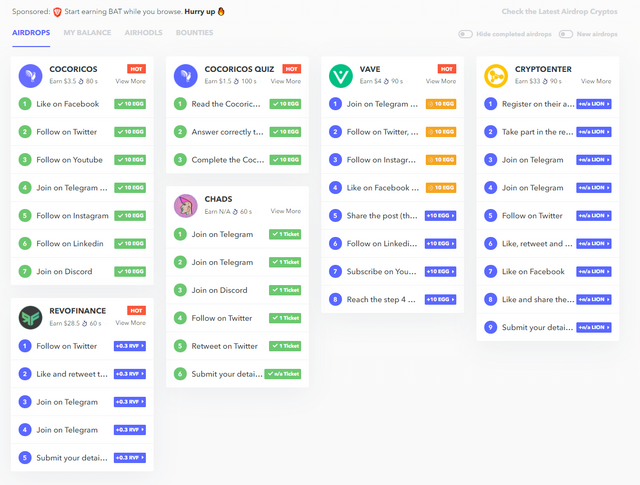 So why am I writing this post? - CONCLUSION and a chance to earn

First of all - I want your opinion. Are you using Cocoricos? Do you think they're legit? Or am I just wasting my time again?

And if you're not using Cocoricos, here's my referral link. Or you can also press the gif below that I just created. If you join with my invite and complete at least 4 steps on Cocoricos bounty, I'll get 10 EGGs. Later you can invite your friends to get more EGGs. Now I feel like I'm talking about Easter.

Anyway - thank you for reading and have an amazing day/night ahead!

Photo by Luca Bravo on Unsplash