I was a little less active on the social side of Hive for the month of June, but even so with the price of Hive, and the stable curation for the month I really did not do to bad, only about 7 Hive less than last month. 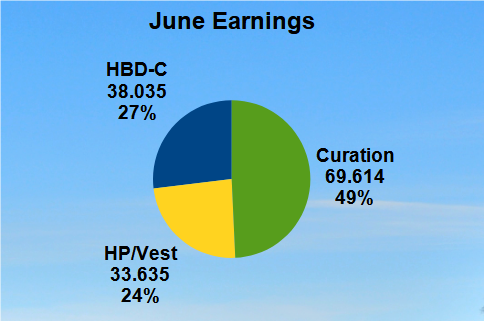 As you can see Curation was almost 50% of my earnings this month. With HF 25 it will be interesting to see this chart next month.

With my earnings and then being able to power up a nice amount a nice little rise in the chart. One of my goals for this year is to reach 10,000 HP and with the year half way over it looks like I really will be able to do it. 1165 Hive powered up so far this year, so if the trend holds for me I should make it: 1139 Hive to go.

I was not very active social wise in June as the charts below will show. Still I did have fun, spent a little more time on a new game, and I continued with the Zombie Game even though I was dead I still played, it was a fun and strange comment stream at times from me. 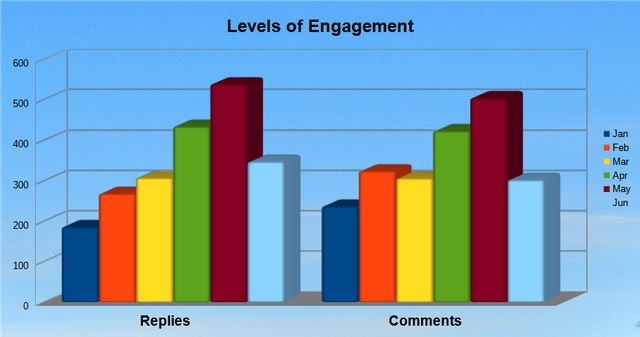 The replies include a lot of bot type replies from the comment reward bots of ENGAGE, BEER, and PIZZA, I like dishing them out in the Zombie Board Game from @happyme.

Postings, well I never really have been a big poster as you can see. I always strive for three a week but most times I am lucky to average 2 a week. Still I do like sharing things every now and then on Hive. 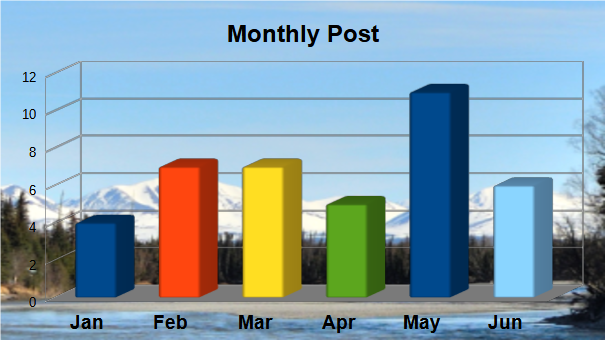 Okay, as mentioned not a good social month for me, so here comes the charts:

Only one day with more than 20 comments and that was all on HF/HPUD day, so i did have a little bit to say yesterday. Half of the month with less than 10 comments a day, not sure if that will change or not, we will just have to wait and see. I would like to get more than 10 comments a day out, so i will have to try better to read, comment then vote instead of pre-voting, then reading, at least on the first ten of the day.

Up next the standing down fall:

The rise ther is not good, this is where the standings for the week are, I want a small number and would like to stay in or close to the top 20, so you can see that my lack of social on Hive is pretty obvious for the month.

Hive Power Up Day, I made a nice power up yesterday, and I hope some of my other H-E tokens will once again pay-off at the end of July for another nice bonus rise in my HP. I missed that first bee, but have participated every month since and am collecting bee badges along the way. I am only missing the super bee badge, but you need to power up 1000 HP for it and as you can see I do not make that much, but still one day I may get it.

HF 25, a pretty smooth, (so far), hard fork. One of the smoothest hard forks. Good planing, good execution of the plan and good pre-fork testing was a good and winning combo that gave us one of the easiest, (from a user stand point), hard forks in the three and a half years of my on-chain history.

Reputation Level: It was November 29th that I moved into the ranks of 68 REP, with a level of 68.079. Yesterday I finally made it into the 69 REP level. Slow growth but still always forward progress. Maybe in another 8 months I will be at 70 REP.

The Reputation system is one of the things that was being discussed, in various areas and post of Hive, about being re-worked. There are a lot of ways to increase your Reputation Level, some good, some that used to be bad, some neutral. I have pretty much been neutral, but with the changes from HF 25 perhaps that will help my Reputation grow a little more quickly, we will see.

That's pretty much it for the side notes, I hope everyone had a nice profitable June.