LEO Finance - What about giving a tip or gift feature for your favourite authors?

LEO Finance features are released with the speed of light and the team listens to the community and the proposals from within. Other platforms and sites are emerging in the cryptocurrency world and the blogging expands as never seen before. We need to be ahead of the competition or to catch up and we need slick features to attract other users or keep the current valuable authors satisfied about the rewards they are getting from here for their time and insight.

For today I want to propose a new feature on LEO Finance and that is in the form of Giving a Tip or Gift widget to reward authors on the spot with LEO (or any other cryptocurrency tokens from Hive, Ethereum or alike) instead of 7 day upvote curation. That should create instant gratification and as well some tips and gifts can be more symbolic rather than monetary token significance. 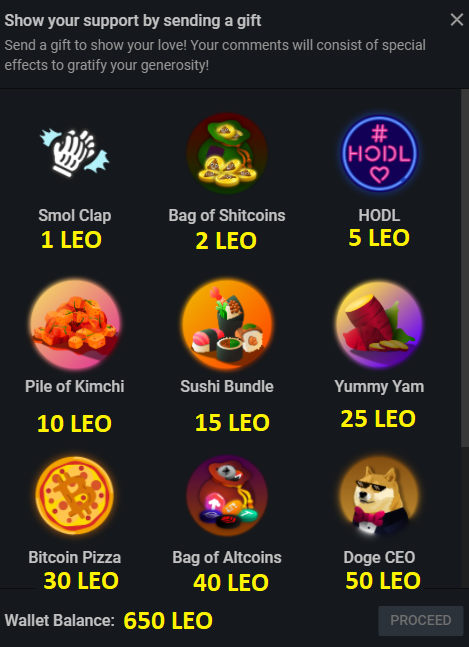 Giving a Tip and Gif feature is an additional appreciation that can show that the author simply posted an amazing article and is another way of interaction with him. It is real time gratification and sometimes that matters compare to an upvote that requires maturization to give curation rewards. It is just another layer put on top and as I said it can use additional cryptocurrencies.

Myself, I would simply enjoy to get some BEER tokens simply to start the party started or others alike - DEC, SPT, CTP, PAL, NEOXAG, STEM and other alike. An effect of this could be to attract the eyes of other communities which could git their token as a mean to expand anyones earning and express common interests. It could bring additional tokens to the LEO Finance space and simply motivate great authors to stay here while expanding their income from different sources. This could be a simplified Publish0x model where you can tip with different tokens. Some sweet Ethereum would be great as a tip or gift as well!

What do you say about having such a feature

to give a tip or gift for your favourite authors?