Adding these common monsters to your deck will be very profitable 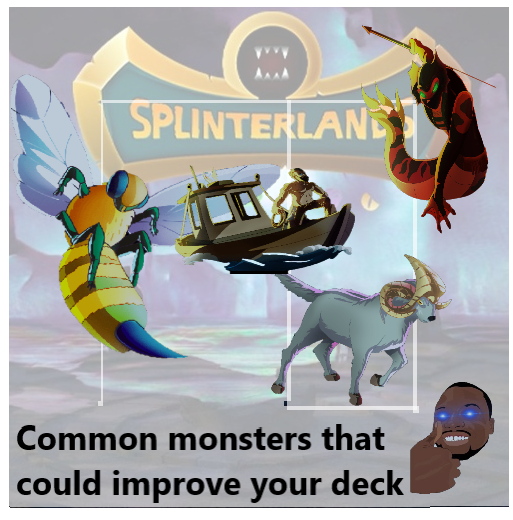 If you've been active on Splinterlands, then you must have noticed that the market value of your deck has been rising. There's a frenzy to acquire assets due to the looming airdrop and this has led to a sudden hike in the price of assets.

In the midst of the pump, certain cards have outperformed others in the same category. These monsters are either out of price range for "simply acquiring" or are on their way to that level.

What I mean is that the cards that are out of price range are the ones you can purchase if you need their firepower in your team. However, if you have spare money and like to hoard cards, then you might as well throw some money at these cards because their prices have the potential to rise.

As a rule of thumb, any common monster that has surpassed $0.2 per card will be regarded as out of price range. I'm only going by this analogy because, in the not-so-distant past, this price for a common monster was unthinkable, yet here we are with common monsters surpassing it.

It is also worth adding that the monsters on this list are the more recently created card. The list will not discuss Alpha and Beta packs because those cards are already very expesive as it is and have become very difficult to buy.

This is an untamed fire monster and is still my favourite monster in the game. It reminds me of a ninja and the market has caught on to its badassness.

The price of this monster has been rising for a while now. This rise in market value is due to a combination of its awesomeness and the fact that it's an untamed monster. Don't be surprised if the value of this monster rises to $1 per monster in the near future.

This is one of the older members of the "reward card" family and over the months, we've seen its price rise to a crazy level. At the time of writing, you can it in the market for $0.14 per piece but that will be when you buy a level 9 card.

Assuming you want to add a single copy of the monster, you will spend at least $0.57. That's quite a lot for a common monster and I think as time goes on, this card will rise to $1.

It's rather unusual to see a common monster without any attack become so expensive. However, that's the case with this birdie that develops healing ability at level 6.

I believe a big factor to its price of $0.3 price when buying bulk and $0.41 price for buying single copies is due to the fact that it's an untamed monster. It is a really useful monster in battle and should be added to your deck before it gets to $1.

In Nectar Queen, we have a hard-hitting flying Melee monster that commands respect in the "Tank" position. She's really efficient in battle and is a mainstay in my team, as far as the mana cap permits of course.

This monster currently trades $0.11 per piece but I tell you, she has the potential to rise even higher than this. Don't be surprised if you see her trading around $0.35 in the coming weeks.

Buying her now could translate to a 300% profit on your investment. That's a sweet deal if you ask me.

This is another Untamed monster on the list, so it is a pretty rare monster to come by. It is a slow monster, so reverse speed battles are for it.

It currently trades at $0.1 but judging by how rare it is going to become, I expect it to rise in the coming weeks or months. A scavenging melee attack monster with opportunity in life splinter and is untamed? Sounds like a resume that's destined for big things.

This blood sucking ranged monster joins the list and is a reward monster. It is actually out of print, so the only way to get it is through the market.

The first neutral monster on our list and one that needs no introduction, we have the badass Sandworm. In fact, this sneak monster takes badassness to another level, and it is baffling how it is even a common monster.

It is still in print, so you could get it from doing daily and seasonal quests but the question is, will that be enough? It currently trades at $0.32 but something tells me that's not the ceiling.

Other than the cards outlined above, here is a list of other notable entries that you should consider adding to your deck;

Adding as many of these cards into your deck will almost certainly be profitable in the medium and long term. It is about squeezing in as many as you can.

The best part about all these cards is that they're not "vanity cards" because they are assets that can be used for battle. Either way, you don't lose when you add them to your team.