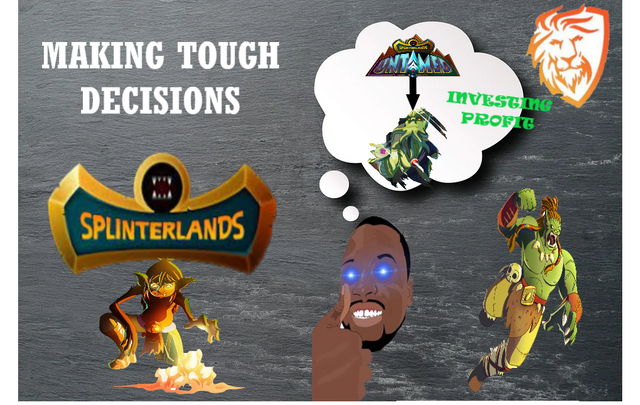 I've been doing a lot of trading on Splinterlands lately and the current value of DEC makes it a lot easier to actually make changes in your deck. I mean, despite the unusually high USD valuation of the token that has influenced the market value of most assets, it has actually become a lot easier to upgrade your assets in the game.

The only issue now is that actually getting DEC is a problem. Forget about the insane demand for DEC in the market, even battles have become infinitely harder.

I've never been a world beater but at least I could pull off a decent run and accumulate from my streaks. Thanks to the recent surge in demand, even winning battles to get DEC is far more difficult.

One of my biggest issues with Splinterlands is that I tend to get attached to my cards. This sentimental attachment to my cards tends to influence my trading decisions that should largely be prejudice-free.

Also, my fixation on rising up the ranks also affects my capacity to take profit when I should, thus often putting me in self-inflicted "difficult situations". For example, due to the recent surge in prices, the price of my Gold foils has rapidly risen but I've struggled to bring myself to sell them because I've grown too attached to them and their collection power is needed for my plan to climb up the ladder.

Sometimes, I feel like this my plan is misguided and instead of worrying so much about being able to climb up the ranks, I should focus my energy on just improving my deck and dominating my level first. So the issue is how I let myself sell the cards I'm attached to, so I can reinvest the value into my deck.

When I think about my deck in isolation, there are certain choices that I have to make that will ensure improvement without necessarily denting my battling capacity. One of which is maxing out my summoners but that has proven to be a very expensive venture.

Right now, one of the things I'm actually trying to do is selling off certain more expensive summoners in my possession and then replacing them with cheaper summoners of the same splinter. For example, Qid Yuff of Dice is far cheaper than Pyre of untameds, so why not just sell off all my Pyre and move to Qid Yuff?

The issue now is letting myself let go of Pyre and moving to Qid. I know that Qid's buff tends to be useless in battles but in reality, it will matter less when you have a solid deck of monsters behind it.

Also, Qid's time under the sun will come. It may be cheap now but it won't be cheap forever because in splinterlands, time is a big factor in determining the value of a monster.

So buying as many Qid Yuff as possible and then maxing it out now seems to be the best option. This conundrum is something I far in virtually every part of my deck where I have one monster if considerable value against a less expensive monster that could do the job. However, my attachment issues inhibits me from making the trade.

I actually considered putting it up for rent but I just scratched that instead, since I spend more time battling with the monsters anyway. However, whenever I decide to hang my boots from battling, I think I'll just delve into the rental market and turn splinterlands into a full rental business like my friend @sharkleo.

I'll be selling off assets that are more expensive and replacing them with cheaper, and slightly less effective compatriots. It may not be what I want but it is what I need at this moment.

I have to make an economic decision that is completely void of my emotions. You would think that since these are digital assets, it would be easy to do but for me, it's never that easy.