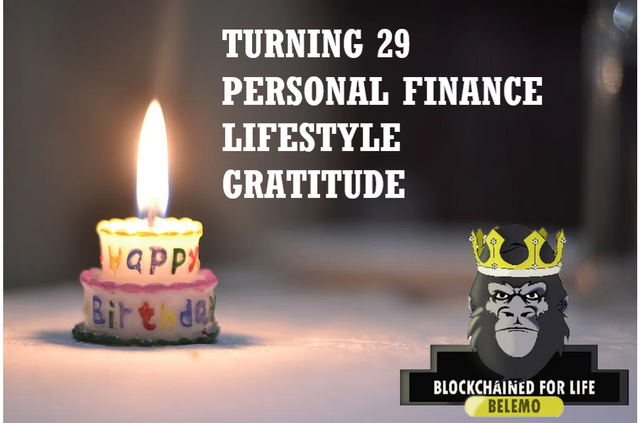 I turn 29 today and I can hardly believe the type of life I'm living now. It's safe to say that I like the way I'm living now and if you rewind to four years ago, I'd have never guessed my life would turn out this way.

I think personal finance is a key factor in determining the quality of life one lives. There's really nothing to it, the amount of money you have at your disposal determines what you have access to.

On numerous occasions, I've talked about how my life is funded through my crypto ventures. It's been a mix of happy and sad times but overall, it's been profitable.

Handling my finances has probably been the most exciting challenge I've ever embarked on. Over the years, my finances have improved and it has reflected in my quality of life.

The interesting thing about handling my finances and growing my portfolio is that every single day presents a unique challenge and opportunity. In the past almost four years since I've been around the crypto industry, I've literally never experienced two days that were identical.

It's actually a lot of fun when you think about it. Yeah, it's quite risky but isn't everything else in life risky and the biggest risk in life is not taking risks, so you have to try things to know if they work or not.

In recent times, I've toned down the amount of tinkering I do on my assets but it's not because I don't have a strategy but more so because the current breadwinner of my bag requires some patience.

That notwithstanding, I still have to come online every day to see how things are going and make mental or direct changes to my variables. Whether it's selling, buying, or staking, it has to be calculated.

Sorting out my lifestyle

I saw a post from @cwow2 where he talked about living healthy and that sort of reached out to me because I've actually been on the same road. It's not because I'm getting older or anything but that's not a bad reason either, it's just that I want to be a better person because it's all connected.

If I don't stay healthy, how will I be able to do stuff that earns me magic internet money? So I've been trying to make some changes to my lifestyle changes with mixed results.

For example, I've been trying to cut down on beer and I could go a long time without beer, only to end up getting wasted whenever I get the opportunity to drink beer.

Right now, alcohol is probably the only unhealthy substance I consume, and keeping it real with you, the only thing that could make me stop drinking is if 1000BTC magically appears in my wallet. I'll stop drinking because I'll graduate to cocaine since I can afford it.

On the plus side, I've been exercising, even though it's been inconsistent. I hit the gym 3-5 times weekly and I'm trying to make it more often. My body can handle it, it's just the motivation that's lacking right now.

I've also been trying to eat healthily but again, consistency is the issue. For this part, it's actually all on me. Eating healthy is really hard, boring, and kind of expensive as well.

Plans for the future

My immediate plans remain the same and that's to get the hell out of Nigeria. So right now, I'm in accumulation mode, instead of panic mode.

Panic mode will probably be initiated sometime next year or early part of the year after when I'm certain we've accumulated enough for our exit. When I'm in panic mode which sounds very dramatic but in reality is just a period when we'll be pooling resources to exit, we'll sell off assets.

Here's the thing though, I still intend to grow my portfolio while dumping hard. So, my hope and current work is towards moving assets around until I reach certain goals in both Hive and outside Hive.

It's a great day to be alive and to celebrate my 29th birthday. Life is happening and all I have is gratitude.

Happy birthday to me.