When will you buy the GLX dip? 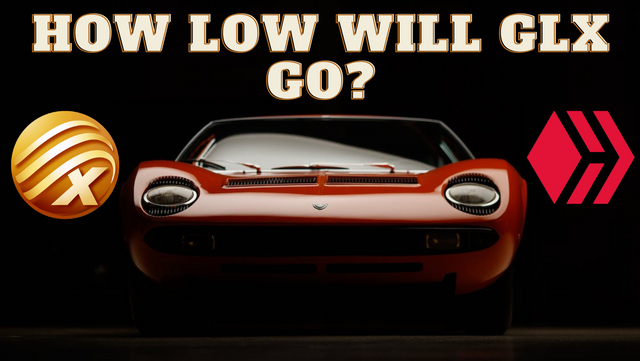 Let's face it, we all knew the GLX bubble was destined to burst at some point and with the price of each token currently around 14 cents, I guess we could say the "good times" have finally come to an end. It feels like a strange thing to say about a token that has barely even been around.

Perhaps I'm being too optimistic but I have a feeling that we haven't seen the last of the GLX pump fest. Sadly, we'll have to deal with the current dip as the market cools off from two weeks of aggressive pumping.

How low can it go?

The question on everyone's lips now is how sexy is @acidyo, will he ever dox and of course, how low will GLX go? Both questions remain a mystery for everyone on Hive and only one of them can be answered through the charts.

Seriously though, timing the GLX dip, buying a decent stack of the token for cheap and staking right now is actually a brilliant idea.

I'm not particularly pressed to throw funds at GLX tokens until they're dirt cheap. The thing is, I doubt speculators will allow that to happen now.

Considering where SPS token is, in terms of price, it is not out of the question to think that we'll see GLX token head in the same direction. There's a scheduled increase in the inflation from pack airdrops after the threshold is reached and that's certainly going to be adding weight to the supply side of the market.

As more tokens hit the market, I reckon we'll see a dilution of the market cap, thereby dropping the price in the process. It is simple maths really, but the question is, how soon are we talking about?

SPS dip is juicy though

At the time of writing, you can buy 1000 SPS token for less than $40 and that's testament to how far the market has fallen. The APR for staking is still 25%; not earth-shattering but also nothing to scoff at, if you have a shit ton of funds to throw at the project.

I don't have a shit ton of money but I certainly can increase the number of tokens I staked regularly and I aim to do that with what I have in stock.

I'm very skeptical about buying GLX tokens because I'm not exactly sure where the local bottom is. It could be here at 14 cents or somewhere lower at 2 cents, and that uncertainty is what prevents me from buying.

I'm also too poor to be gambling with my very limited funds and at this price, it's not like my tiny funds can buy a decent quantity.

On the other hand, SPS is definitely in the vicinity of its bottom as we're currently at its ATL. However, it is important to note that SPS has been dirt cheap for a while, so even a dip will be insignificant.

Keep in mind that staking SPS also makes you eligible for daily GLX airdrop, making it a less risky approach to piling up GLX tokens. As SPS gets cheaper, it is easier to get more GLX since our daily airdrop is based on the total units of SPS staked, making it a volume game.

splinterboost
2 mo
This post has been given a 10.0% UpVote by the SplinterBoost Community Curation Bot.

Maybe on my deathbed

The whole family gathers around as he lays in his death bed at a ripe old age. He looks at the crowd as their tears fill the room and you prepare to say your last few words

"One of you will inherit the keys to my hive account. Please don't dump the Posh tokens" He says, as he peacefully fades into the light.

I've decided to not really buy any GLX, but to stake some of what I've earned for staking SPS. On @sharkmonsters, that is. That's my Splinterlands account.

How many SPS do you have staked?

I think $0.001 is a fair valuation for a start. Everything above that is a steal for sellers and from what I am reading, a lot of people are selling all of their staking rewards.

As for SPS, I think the layoff news impacted the price a bit. Speculators doing their thing.