Phew... these Coinlist sales are coming at a faster tempo these days. It does make it hard to see what is worth buying into or not... but on the other hand, it doesn't hurt to put a little bit on these long term curated bets! You never know!

However, I've now come to the conclusion that these sales have now turned into a bit of a rigged lottery at best. There is a queue system in place, but the different variations have been gamed so heavily that it is starting to become a joke. Unless Coinlist starts to fix this, it will be what they will be known for... There was a time when this was the best and most orderly way to access curated crowdsales of tokens. These days, bots and multiple accounts have ruined the experience for most people.

I really think that they should make people pre-fund their accounts and queue the orders in a more logical way. However, I'm sure that they are enjoying their publicity (even if it is really negative at times...) and the fees that they are making! Sadly, it does mean that their long term supporters are starting to get the poops!

Anyway, enough griping... this week we have the Clover sale coming up in the form of three rounds. The exact "what to expect" email hasn't been sent out... but I'm not holding my breath, I'm going to expect a similar gaming of the system that has featured in the past three sales this year... sigh, in many ways, I pine for the quietness of the bear market again! 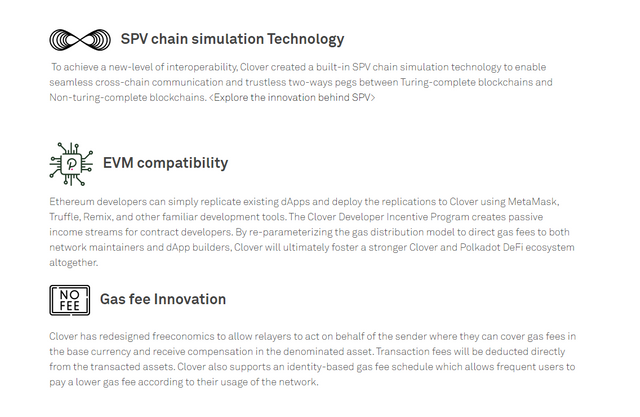 Clover is an attempt to harmonise communications between blockchains, both smart contract ones and regular "dumb" ones. This still is an ongoing problem that needs to be solved or we will end up in a future with a "winner-takes-all" system when blockchains can't effectively communicate with each other. At some point, network effects become too dominnant and no one will want to develop or use competing networks.

As with most newer deployments, there is a level of backwards compatability. An odd thing to say given that most of these languages are less than 10 years old! However, it does make things easier for developers in that they can just easily port their dApps to Clover without any additional problems... well, problems on the coding level. Other problems (humans, game theory, economic incentives...) always exist and might be created anew.

An interesting aspect is the No Fee transactions. This I'm curious about, it has been a staple of our little corner of the crypto-world for quite some time... but feeless transactions are not a widespread feature of other blockchains. From initial reading, it does appear that fees will be taken from the asset that is transacted, much like you would when withdraw from an exchange... instead of the underlying native coin (in this case, Clover).

So, this is a blockchain about cross-chain interoperability and communication. It will have some competition in that case from Polkadot and Cosmos, but the space is still early and who knows what sort of protocol can win in this very important space! 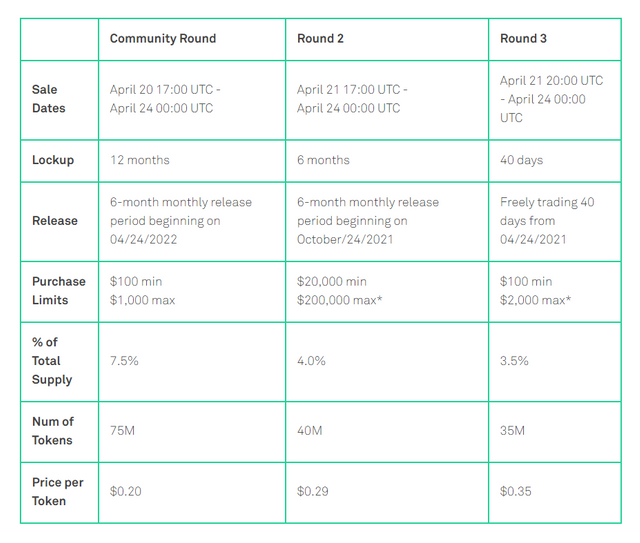 There are three rounds for this sale. As per previous rounds, the cheaper and longer locked duration coins are leading the rounds with smaller allocations. These are the "community" rounds that incentivise long-term holders and believers in the project, but they tend to sell out fast these days. The second round is the big investor one, and the last is geared towards those who want to try and cash in fast!

I'm always surprised that many of the sharks and "get rich quick" crowd bother with the locked duration tokens. I would have thought that they would just go for the freely trading ones as that is where you stand to make the most ROI if you are smart. Holding for 12-24 months is inherently risky, and means that you have more commitment to the vision of the project than the ability cash in quickly and flexibly.

The thing I LOVE about this set of crowdsales is the timing... most of the previous ones have been at 00:00 UTC... which is the middle of the night for me. The timing of these rounds brings it into a nice time zone for Europe, and as the US is restricted from participating it means it disadvantages other parts of the world (unless they want to stay up!). In the end it won't matter... after all, you see all the videos of botting and multiple accounts circulating on social media and you wonder why you even bother!

Ahhhh... the reassurance of previous VC backers. Aka, possibly the ones that might dump on us!

Ledger Nano S/X: Keep your crypto safe and offline with the leading hardware wallet provider. Not your keys, not your crypto!
Binance: My first choice of centralised exchange, featuring a wide variety of crypto and savings products.
Kucoin: My second choice in exchanges, many tokens listed here that you can't get on Binance!
Coinbase: If you need a regulated and safe environment to trade, this is the first exchange for most newcomers!
Crypto.com: Mixed feelings, but they have the BEST looking VISA debit card in existence! Seriously, it is beautiful!
CoinList: Access to early investor and crowdsale of vetted and reserached projects.
Cointracking: Automated or manual tracking of crypto for accounting and taxation reports.

Congratulations @bengy! You have completed the following achievement on the Hive blockchain and have been rewarded with new badge(s) :