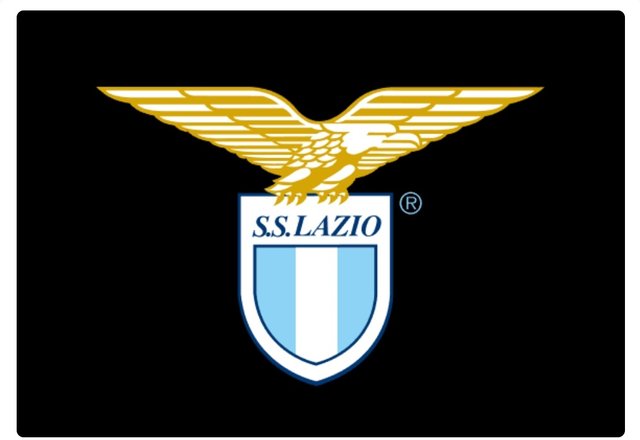 Hot on the heels of a pretty successful release of the Beta Finance token on Binance Launchpad comes another Launchpad project. It has been quite a while since there was a flurry of launches on the Binance platform, so I'm really quite happy that there is a second one in such short time. Now, I'm generally a fan of the fan tokens (sigh, that reads awkwardly...) as I don't really see much use for them personally. On the other hand, economics and worth are not defined by what I find useful... and apparently, football and sports in general is a pretty big money making facade... sorry, business.

So, when previous fan tokens have launched on the Binance platform that were linked to the Socios (CHZ) Chiliz dApp, I chose to hold very little of the fan tokens post-launch. I took advantage of the initial listing price spike to sell as much as I could and return a portion of the profits into the CHZ platform token instead. My rationale was that if the fan tokens ever took off, it would be the platform that would be the chief beneficiary and it would save me figuring out what fan tokens might be more profitable than others. Given my lack of football and sports knowledge, I would have absolutely no idea what clubs have the most rabid following that are willing to sink their money into the tokens that give somewhat limited club access. Sort of like the fat-protocol thesis that was the all the rage several years back... the idea that native blockchain coins would be the things to back instead of dApp tokens. Well, the tokens have the biggest risk and profit... and with cross-chain portability beocming a real thing, it isn't sure that that might still be the case!

However, with fan tokens... I'm sticking with this idea.

Now, these announcements always trigger off a 7 day weighted snapshot of your BNB holdings on Binance. The unstaking period of on-chain BNB delegations is 7 days... so, anything that is staked on-chain will be unable to participate in these Launchpads, something that I think was a pretty deliberate decision. I wonder if insiders get a heads-up to unstake earlier. For that reason, I leave BNB floating in the Vault on exchange... for the hefty VISA cashback as well as the flexibility of participation in Launchpads. Keep in mind that any locked staking products do NOT count towards the snapshots either. 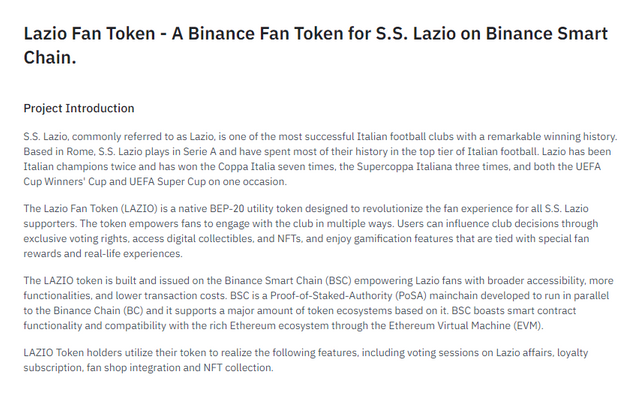 So, a top football club and a top crypto exchange in partnership... this could be a little bit more interesting than I had thought!

Again, I see that the LAZIO tokens are supposed to operate in a way to mimic DAOs and governance tokens. Sort of "suggesting" a direction for the football club. Honestly, these things are barely working in the DAO space for representative governance... whales and sybils are problematic... as is uninformed non-technical voting. So, I wonder if a traditional style of governance (football management) is even going to come anywhere close to implementing a DAO sort of system... even if it is just for listing fan merchandise! In fact, I would argue if a token is even required for any of this... or if it would be even worse than just asking and polling your paid membership WITHOUT tokens!

Usual token stuff... 21.5% at listing at a launchpad price of 1USD in BNB. Actually, I'm really not paying too much attention to this sort of thing for this particular launchpad. This is a "ape" launchpad for me, as I have absolutely no interest in holding this (or any) fan token. Principal goals will be to get out with at LEAST my initial investment... and hope that crazy fans pump it like mad in the opening hour so I can dump with a nice fat return! Sorry guys... this just isn't my sort of thing! But one person's rough stone is another person's diamond... just because it is of no worth to me, does not mean that it is completely worthless to the next person!

I can also be found cross-posting at:
Hive
Steem
Publish0x

Ledger Nano S/X: Keep your crypto safe and offline with the leading hardware wallet provider. Not your keys, not your crypto!
Binance: My first choice of centralised exchange, featuring a wide variety of crypto and savings products.
Kucoin: My second choice in exchanges, many tokens listed here that you can't get on Binance!
FTX: Regulated US-based exchange with some pretty interesting and useful discounts on trading and withdrawal fees for FTT holders. Decent fiat on-ramp as well!
MXC: Listings of lots of interesting tokens that are usually only available on DEXs. Avoid high gas prices!
Coinbase: If you need a regulated and safe environment to trade, this is the first exchange for most newcomers!
Crypto.com: Mixed feelings, but they have the BEST looking VISA debit card in existence! Seriously, it is beautiful!
CoinList: Access to early investor and crowdsale of vetted and reserached projects.
Cointracking: Automated or manual tracking of crypto for accounting and taxation reports.
Stoic: A USD maximisation bot trading on Binance using long-term long strategies, powered by the AI/human system of Cindicator.
StakeDAO: Decentralised pooled staking of PoS assets.