Is Crypto The Issue? Or is it This? 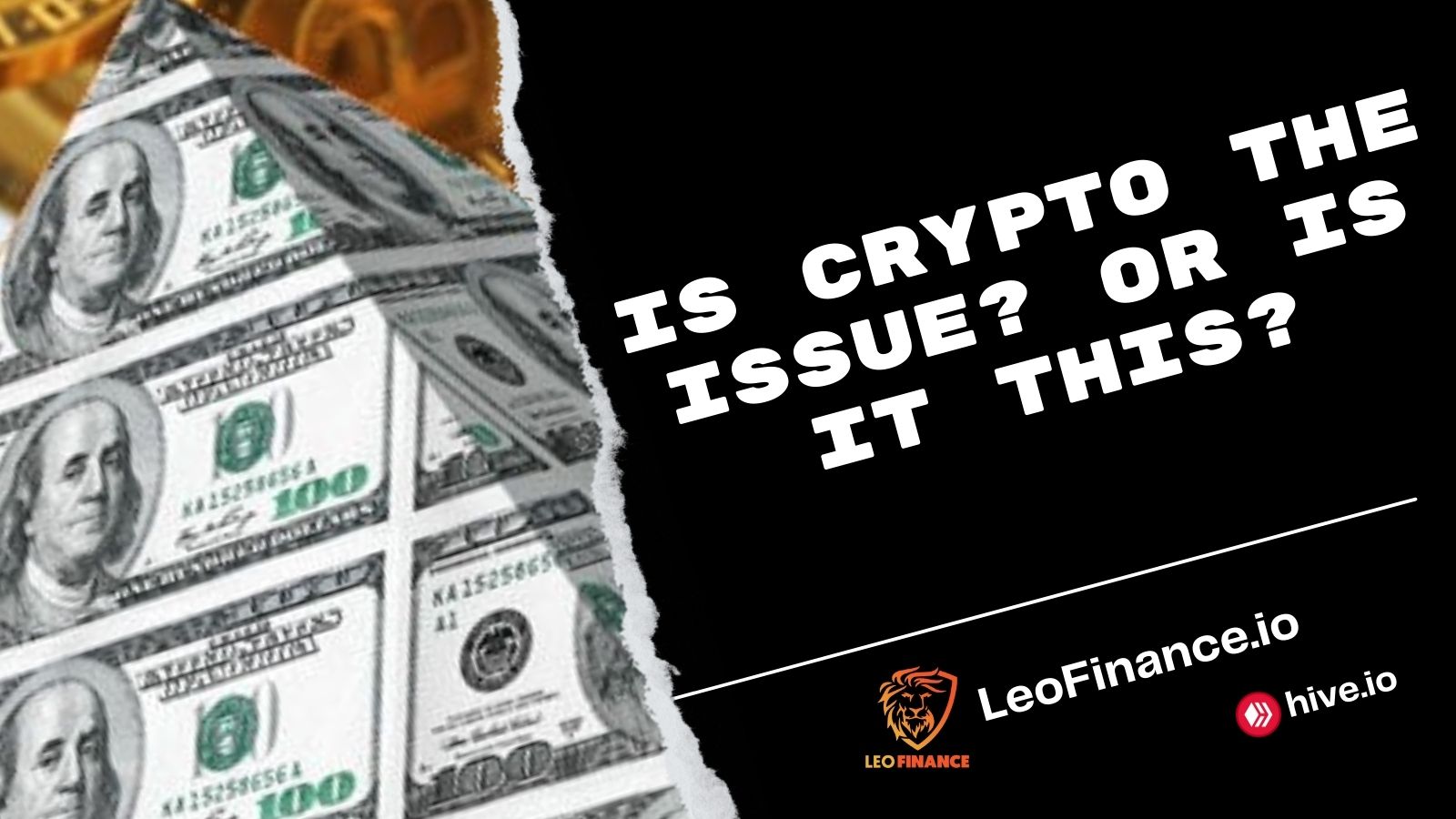 Is Crypto The Issue? Or is it This?

Lots of news continues to come out including China yet again calling crypto a Ponzi. In fact people on twitter throw this around wildly as well. If you're one of those people I want you to take a step back for a moment and look at the bigger picture. Is crypto the scam or Ponzi or is it in fact the systems trying to piggy back off of it such as DeFi, lending, NFTs and so forth.

If you still think Crypto is the Ponzi well then wouldn't that make any Fiat currency even the USD which you use daily a Ponzi as well? The only thing that provides value to the USD is other people wanting it and the government constantly injecting new capital into it.

In fact everything would then be a Ponzi being that money has to come from somewhere in order to pay investors in all cases. This includes your banking system.

Those getting loans or other types of finances have to pay their loans to bring capital back in for those investing into a savings account to earn interest.

Another lender called Vauld just suspended withdrawals as well. This is a clear repeat of what happened in the traditional finical system during the great depression where there's a run on these lenders to pull out funds and they simply are not there. There's also no one to secure them and no on to bail them out. I hate to say it but you just have to deal with the punches when it comes to crypto. The issue is the masses wont and will now call for higher regulations which is going to drastically change crypto rolling forward in the next few years.

Unless of course a decentralized method can be found to regulate and control the system with it's users to prevent such scenarios from playing out again.

It's clear to see that regulations and safety nets are going to be required moving forward. As much as I personally hate that idea it's the only logical step forward because 98% of investors and people simply throw their money around with no care and no research and just expect to become millionaires. What's worse is in the system that's been created over the last 20-30 years there is less and less responsibility for your own actions and people just expect their government to bail them out. It's quickly shaping this country into a government/state run system which you guessed it DOES NOT END WELL. For some reason human kind continues to repeat this over and over again and looking back through history in the next 50 years we should be repeating it yet again.

It might not seem like much now but every small move away from allowing you to keep your money and freedoms the closer we get to that type of world. The same one millions fought for and died for. Please take a moment and let that sink in this July 4th holiday and start taking responsibility for yourself and your own actions and building your freedoms once again.

Allegations of NOT ENDING WELL are very reasonable and a sign of caution in a decentralized system. When everyone is free to act and make choices, their attitudes and choices will always be full of consideration, namely prudence.

In my opinion, only crazy and insane people think that all systems "have to end well."

The most important thing to note is that in every system "there is always an opportunity" and only crazy people never take advantage of an opportunity.

Have a nice day

LOL, FUDsters are hard at work right now. Fiat is the real scam. They can print as much as they want to.

They are in overdrive right now as well. Lets give people a little bit of money back they paid in taxes and mainly give it to businesses instead. But then in a year or two make them pay for it 10x. Now that sounds like the biggest Ponzi ever!

Well i think crypto feels like a ponzi. i wanna hear crypto people take some accountability for why they don't bring enough demand and urgency to the space. Why is it that the people don't understand. Maybe you all don't understand what it takes to give the people what they ask and the products they have need and demand for. Maybe they feel the products you all have thus far are trash.

So maybe you should all start there. i think it does feel like a ponzi. i think the difference in the fiat system is that it's well established and there certainly is security there and controlled interest rates atleast for now so still the system is somewhat stable.

From what i see the people in the crypto space don't listen well. The people in the space don't agree and it's probably not likely the space can convince much of the world of anything different. Just look at how i'm here and i don't even get along with the lot of you guys. Doesn't look well. i also think good tech doesn't have to do much convincing unless the tech is questionable itself for what it's use is for.

lol, trying some social push with some clickbait to see traffic numbers besides just SEO. Never hurts. I just don't like to get too click baity

Although there are scams and Ponzi schemes (per definition) in the crypto space, I believe most of these black swam events serve to teach everyone how to be responsible withe their damn money. As you said, there's less and less responsibility because people -- read mega-investors, banks, etc -- know the central bank will somehow back them off. The cryptospace is close to a real free-market capitalism: it punishes greedy people/businesses. It would be awesome to study how people/businesses handled their finances during the free banking era.

Even if crypto is a scam, I would rather trust a system controlled by individuals and block producers rather than by central authorities and the international banking system.

Scams will always exist as long as anything is finance related. Labelling crypto a scam would essentially meaning labelling all other systems the same. Nice post

We need to start taking responsibility for our actions. One Thing I have noted around here is many who scream crypto is ponzi are not the ones losing big numbers.

The system is fucked up already and crypto is just showing us how much fucked up it is.

Crypto is showing us how much we need to trust in our own decisions instead of others opinions. Also, how to trust in the power of a decentralized community.
Crypto speaks freedom but people don't listen and want someone to save them all the time. Those who scream regulations today will still bitch about it later it's a matter of when