This Week In Hive and Goals Nov 20th 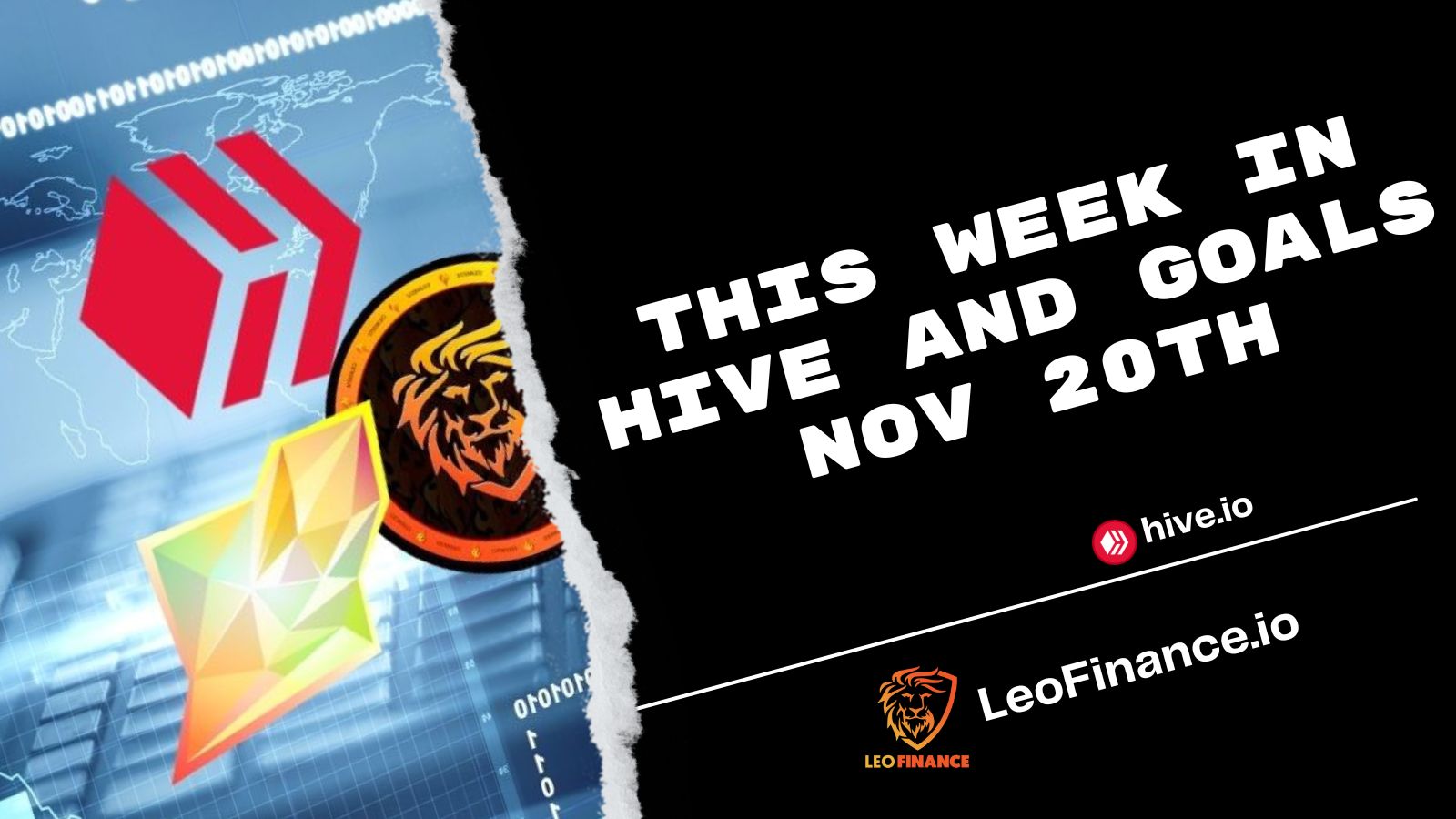 This Week In Hive and Goals Nov 20th

I'd say not much has happened on the Hive front in the last week but there was one major event that sent some shockwaves through the community. That news was the reduction in staff on Splinterlands now while that might sound like bad news and yes and sucks for those people that lost their jobs it's actully a boost to the game in terms of cutting down expenses and running a more lean platform. Personally for most of 2022 I honestly wondered how Splinterlands was able to keep so many people on their books during times like these. Thousands of people have been losing their jobs as businesses cut down expenses and start to run a more lean system as we head into high inflation, high fed rates and a global economy which is a mess right now and most likely won't be cleaned up any time soon. My thoughts of course go out to those who have lost their jobs at Splinterlands but I also know that life throws many challenges in our way and that we can overcome them.

Outside of that in terms of what's new there really hasn't been many updates inside of Hive on any projects. This is most likely the slow down effect of the FTX blow out which has kept markets low and general appeal for crypto low. My hopes are FTX was the last of the mess because crypto has taken beating after beating the last 16 months of this bear market. Liquidity around the world is also becoming a huge issue including in the crypto markets which I'll go over most likely today in a future article.

The only real action I've been seeing right now is on the LeoFinance front as they build in the bear market. It's no easy task and I hope they continue to run a lean and mean platform because times are going to get hard no mater how much liquid funds you have. I'd hate to see LeoFinance over reach and it's something I do worry a bit about at the moment. With that said though LeoThreads Images and Links Is the newest update and it's coming a long nicely.

Personally I've been hitting Hive pretty hard as of late with prices hovering around $0.30-$0.35 for the most part. It's mainly because I know there's a lot to owning as much hive as possible such as passive income from the general steady inflation which is now about 3% on hive as well as the curation rewards which is some active work. That active work however is boosting me around 9% APR at the moment. That means on my hive balance I'm currently earning around 11%- 12% APR.

Last weeks average powered up hive was 102.57 hive per day which puts me a little above that 100 hive a day goal which is another awesome milestone. 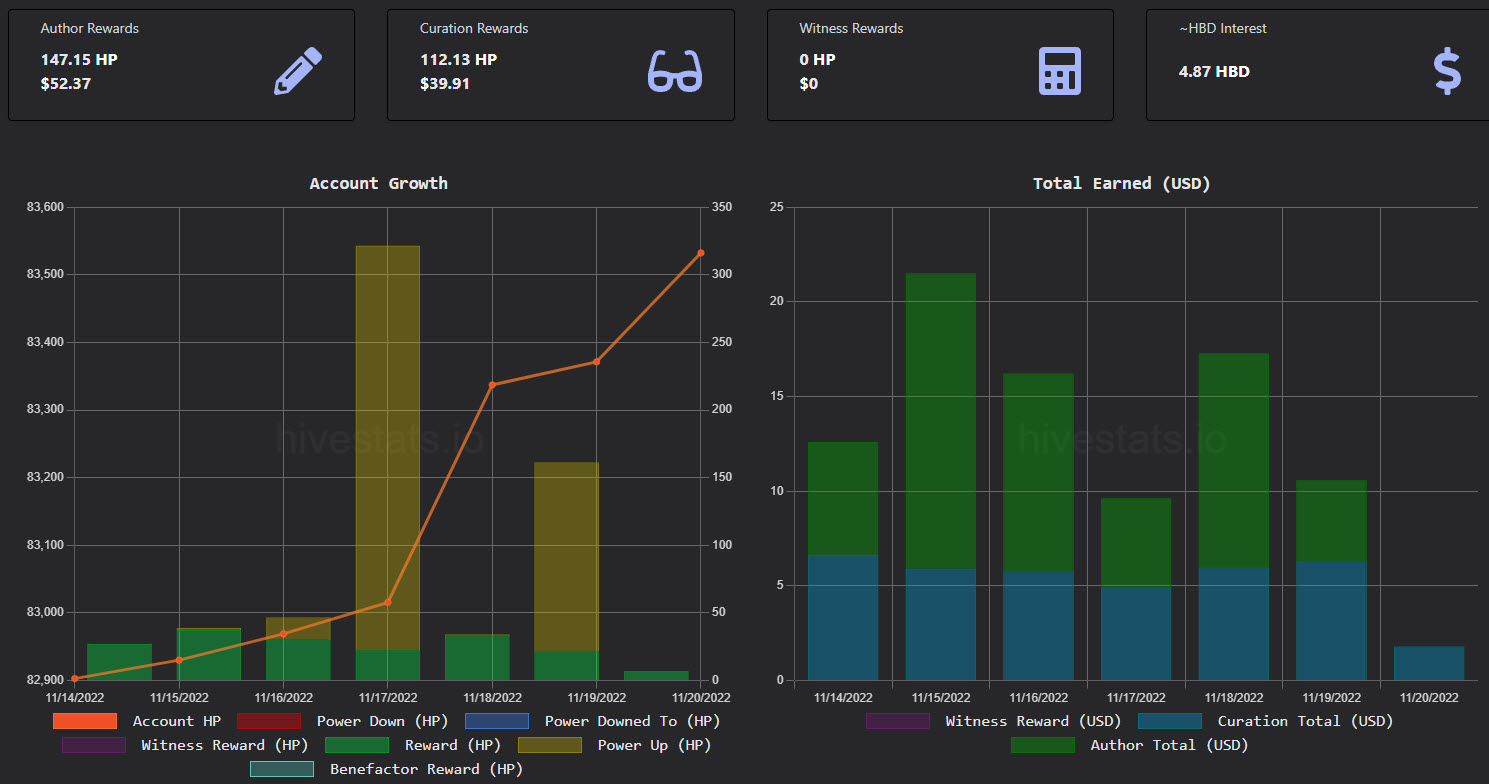 Dollar value wise we are about the same as last week which is about $10 a day in value which is crazy low when you start to compare hours put into the platform and payment out. I have to admit there are times when I struggle with keeping at it because of this number and have to keep reminding myself that although it's $10 today in the bull market that would really be $30+ plus the APRs on top of that.

These pushes however are moving me much faster towards that goal of 100k hive I had. While I most likely wont hit it by end of the year I feel like I'll still be pretty close to it.

This week I went hard in LEO mainly because of LPUD which introduced a NFT for powering up 2000+ hive or a elder NFT for 5000+ Leo powered up that day. I managed to find enough liquidity barely lol to pick up 5,000 more LEO!

That puts me at 777 LEO powered up per day last week. Now that might seem high but when you combine both Hive and LEO to dollar value prices it means I only powered up about $76 worth of tokens each day. Kind of shows you how fast you can move in token staking right now if you have Fiat laying around or earning it right now.

Yes, Splinterlands seems like it was a punch in the face but in the stock market world a change like this is actully a positive signal as the business is trimming the fat and getting more lean and mean. Less expenses and focusing down. GLX which is kind of part of Splinterlands I guess has been doing rather well at the moment with a crazy high APR of over 1,000% and a value around $0.25- $0.30 each. It's turned into a bit of passive income on that front.

I still feel Splinterlands is a strong asset to hold for right now. Not only because of the slimming down but also it's asset values are still holding up rather well compared to the rest of the industry.

i'm getting like 8$ at daily from the glx airdrop and i'm using that income to buy hive and get more hive power while i can! everything helps in my journey to my goal of 10k HP (we have to start at some point) i think at 10k HP the compounding start to do the effect from the curator rewards

It was a surprising week

Yes with FTX, BInance, SPlinterlands, but like you said it's a bear market, and I think of it as a cleansing. We wash off the dirt, and leave the shine.

Congratulations.
I also decided to take the power up and get a Leofinance NFT! Plus get the healthy delegation.

I can't wait to see what the LPUD and the delegation do to the size of my upvote!

I also agree that any money I have laying around is being sent to my Uphold account and then transferred into Leo for LP's or Leo.

These are very atractive right now, so I am moving money there.

They are but I'd only ever go into the stablecoins now. I've lost so much going into the other pools lol

Nice post, interesting reading about your daily hive goal. Good luck on your quest to 100,000!

I've never seen that hivestats.io page, I'm going to check that out for my account too.

Thank you, It's a handy little tool to see what's going on with your account in terms of earnings etc.