How do we know crypto isn't a scam?

If you're here on Hive as a committed Hivean, you may know what Hive is, how it came to be and understand a little of what's going on when you post, receive nice upvotes and collect some HBD and Hive Power in 7 days.

But it is worth trying to look at the world through someone else's eyes and I found myself doing that a couple of days ago.

Over the 25 hour fast of Yom Kippur, I found myself binge listening to a BBC podcast from a couple of years ago. I don't go to synagogue and pray, but I do abstain from eating or drinking from sundown to sundown. 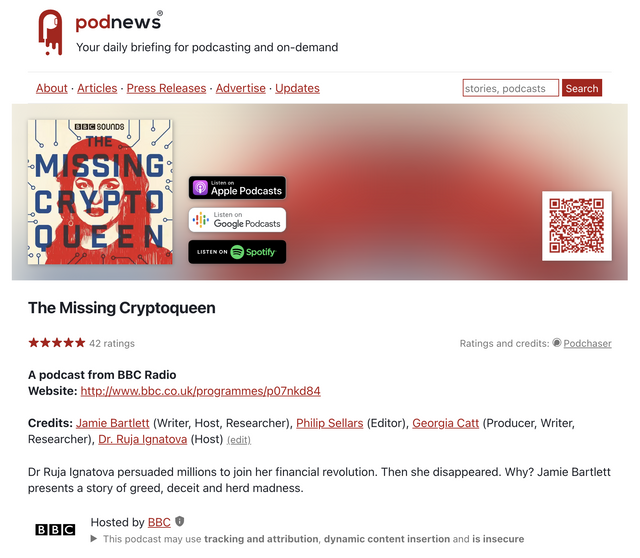 The podcast is about a fraudulent multi layer marketing scam which pretended to be a crypto currency called "OneCoin". It began in 2014 and there is still ongoing legal action and trials in the US. The bottom line is it looks like it scammed people for more than $4bn.

What is a blockchain?

The podcast runs for more than a few hours over 9 episodes spanning from September 2019 to a final episode in August 2020. What it made me do was think how would I know the difference between a complete scam like OneCoin and Bitcoin?

The answer is really how I found Bitcoin: it was in Feb 2011 on the Security Now podcast. The point was, nobody was trying to sell it to me, it was an intellectual oddity.

If someone had come to me and said, buy this information pack about Bitcoin for $300 and I'll give you some information and some "free" electronic coins, I would have been deeply suspicious.

But how many people can tell the difference between a complete scam like OneCoin which, it would appear, never even had their own blockchain (they had a SQL Server) and the very real decentralised world of Bitcoin?

The answer is very few.

For those of us comfortable with Hive and other projects like the Value 4 Value system we're building on Lightning for Podcasting 2.0 or @leofinance or the SPK Network or all the other community lead projects... think how you know they're different from a complete scam? Do you know the people, or at least do you know the reputations of the pseudonymous people? What have they done before, did they appear out of nowhere or did they earn trust?

There was absolutely NOTHING "crypto" about the OneCoin scam. It was sold by a tried and tested method of building a Ponzi scheme and a few people at the top made huge amounts of money and down at the bottom, poor people who couldn't afford it, had their money stolen from them in return for worthless records in a database and some plagiarised PDFs.

But the taint rubs off on all of us and we have to deal with skepticism. So it's worth trying to look through the eyes of an outsider when you're tweeting about Hive as the next great thing and lead people slowly in a way that earns trust.

I'll give an update on @v4vapp and @podping soon, this was just something I need to write about. I've just paid out $1000 of HBD which was owed for some dev work I got help with and that's just the start.