The world of European club football has been rocked over the last week, not by a pandemic, no they found a way around that to still be able to milk their TV deals and merchandise sales.

No, it was the attempted plan to start a brand new league where all the elite clubs from across the continent would play one another. Once the news broke, fans were up in arms, and everyone with a pulse and an arsehole would share their opinion on the topic, myself included in this post.

For those of you who actually have a life, the TLDR is that fans don't want these "local" clubs to leave their current competitions because of some silly arbitrary rules by some random centralised body and nostalgia and history.

I love taking the other side of the argument, and because the moral arguments are such bullshit cases, I thought I'd make a go for why this moral relativism doesn't hold up. 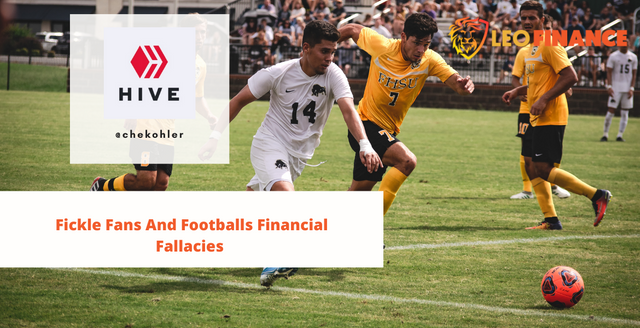 Fans are customers, not stakeholders

As much as fans think they have a voice, they don't. You're just a bunch of customers, and there are more of you to go around. These clubs realise that a few loudmouths appealing to moral relativism don't have the pull to affect their bottom lines.

In fact, many of these fans are so engrossed in the branding and psychologically associating themselves with these sporting franchises that even after voicing their discontent, they'll continue to support them with their wallets.

Unless you have a majority stake in a club or business, you don't have a say in what they do. Sure, you can boycott them, but there's more than enough fans willing to keep buying that slice of success that makes them feel good about themselves to keep these clubs going.

Remember, clubs are businesses, they will outlive you, and when you're dead and gone, that history won't mean as much to the next generation, so you're fighting a losing battle.

Football was commercialised a long time ago

Football has been commoditised ages ago; the passion and history are sold off in pretty marketing, sponsored merchandise, crafted narratives to the tune of something Vince McMahon would be proud to say he scripted. If you can't see the kayfabe surrounding modern football, then I can't help you. But it doesn't take many brain cells to see a lot of what keeps fans engaged are crafted talking points from referee and VAR decisions to player and staff reactions.

If you really think that football was authentic, surely, there would be weeks without drama, but having drama each week that is scripted into the system. The game is based on ratings, based on clicks, based on viewership, based on sales they can actively track. Do you really think they are not monitoring this and leveraging this data to improve the product?

Yes, football is a product; make no mistake about it.

Making a mockery of a meritocracy

I hear this argument that football can't be bought. It's about merit but seriously, cut the shit already. The manufactured merits of professional football are not something you can build a sound argument on.

How can you say football is about merits when clubs can simply fund themselves to success. We've seen this with PSG, Man City and a host of new money clubs. The old guard has had sweetheart deals from the leagues and TV deals such as Real Madrid and Barca.

Merits didn't mean shit then; you accepted the gerrymandering of football for years; now that they want to change, who gets to do the gerrymandering? You're up in arms. Can you not see how asinine these arguments are?

The reason these clubs can spend the amount they do, bring in the players they have and demand the fees they demand is that they are global brands. Liverpool and Barcelona are no longer local clubs playing for the pride of their city. They've been commercialised and sold off for the price of an admission ticket, a jersey, a pay per view or a tv subscription.

What makes it even dumber is people who have NO affiliation, but their own decision, fans who have never been to these countries or cities are making the home town argument.

Why are you not supporting your local club in your nation with the same passion?

Fans are just that, fans

At the end of the day, if you don't have ownership or stake, you can only play one part in this system. You're nothing but a fan, you can pick the team you support, but your opinion only goes as far as the armchair.

If you really felt that passionate about the issue, you'd start a new club, start a consortium to purchase the club or boycott and support a new club. But you won't, so what the point of throwing your hands up and yelling at people and telling them what to do with their property when you have no stake in the game?

Well those club owners spent a ton of money already. We do wish that they would respect the fans but I don't think they care anymore at this point. I think the people in the same country or region will naturally prefer the teams closer to them by distance. So I see no reason for those in charge to change their actions if they are profitable.

I too wish to see them respect their fans more but I have long lost hope for that. Just watch the game, mute the commercials/breaks and get on with life is what I do now.

That was a great alliteration lol.

The super league thing was comical but it looks like they puckered their butthole and turned back on the decision like the good groups they are!

LOL I couldn’t resist but yeah U saw they are all pulling out now but I think this was just a dry run, I think they realized the jump was to big and they need to find an incremental path to make it more palletable!

Oh for sure lol they always have some money scheme up their sleeves. They figured here, go big or go home. The peasants revolted so they are going with plan B or C now.

I wanted to ask, do you want to join my bigger guild in Splinterlands? We have an open spot and this brawl stuff is fun, I saw you brawling in the other guild but it's dead lol the guild on my main account here is way more active and fun. I feel bad for Quiplet's guild but she doesn't remove all the inactive people. If you want, join the guild called Soul Reapers and I'll accept it!

Lol indeed, just a push pull strategy to make them feel like they matter, its the same with politics but eventually they get what they want

Sure, I am happy to switch out, that guild is dead, no one seems to want to contribute to growing it and there's too many dead accounts in there, doesn't seem to be well managed

Sweet, this guild we have is pretty active now so it’s great. The other guild is dead for sure lil

I do agree with a lot of what you are saying and having no crowds at the ground has helped and forced the owners to think like this to find new revenue. Definitely been bought on by the American influence with some of the club owners I feel. Lets wait for the crowds to come back first as owners if they carried on this route would see how fickle the English really are. Remember when Liverpool tried to increase the season ticket price and the boycotts that happened 5 or 6 years ago. They quickly had to apologize and reverse the decision. Yes clubs are a global brand but rely heavily on local support for ticket sales and merchandise. Over the next month it will be interesting to see what punishment is handed out to the 6 as the other clubs have been meeting discussing just this. The 6 big clubs need their votes when proposals are put forward and what is clear they have now lost that support that they relied upon.

Indeed, the stadiums are now white elephants on the balance sheet and not only being a major cost but its now bringing in no income so they're obviously going to look at consolidating income. What many fans don't get is many of these clubs are highly leveraged and NEED the cash flow to avoid going into administration.

Owners aren't going to bail out clubs that makes no financial sense, the bought it to increase their net worth.

Yes Liverpool and Arsenal got backlash for their ticket prices pricing out the common man, so all they did was stagger the price rises and they got there anyway lol May not be as far ahead as they would like but it still increased.

Thank you very much for sharing, have a good week