When I speak about Bitcoin to normies, no-coiners and pre-coiners, one of the major objections are that there is no physical version of the unit of measure that they can transfer in the real world.

I've heard the argument that without the internet, there would be no Bitcoin. While correct, it would mean ALOT would be lost, even fiat money with the vast majority, over 90% of fiat being a digital representation. So if there was no internet, there's no fiat money either, or well the majority of fiat.

Ask yourself how much cash you have on you right now? Probably not a lot; I know I barely have enough on me to buy a bottle of water. We rely on banking and electronic services, so regardless of Bitcoin, there's no internet, the amount of commerce plummets too.

So I don't buy that argument as a starter; if we had no internet or electricity, we'd have bigger societal problems than storing value long term.

Bringing the digital into the physical world

Everyone is different; the younger generation seems to adapt to the idea that digital objects have value quickly. However, the older generation and more sceptics prefer something they can hold in their hand.

I think this is an important part of the user experience of Bitcoin that's clearly lacking. While some can understand the thought abstraction of Bitcoin's value, others will need that physical manifestation that can be traded.

The reason digital cash was easy to transition to is that there was a base of physical cash and a history of commerce for these piece of paper.

I think while eCommerce will be Bitcoins primary transaction base, physical economy transactions shouldn't be discounted. 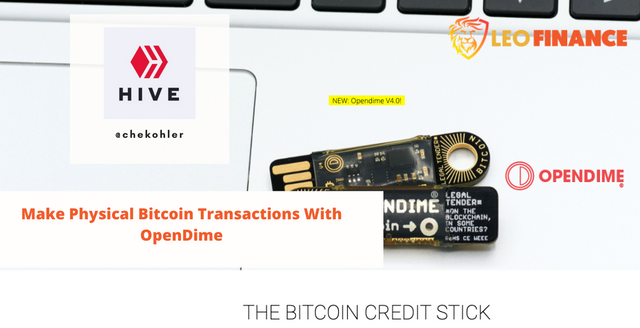 Sure we've had paper wallets for some time now, where you could generate a QR code on a piece of paper that could access Bitcoin funds. A user could then add funds to a wallet, add the QR code to a piece of paper and hand it to someone as means of payment.

The recipient can scan the code and gain access to the wallet and the funds inside it. This does work, but it requires a lot of technical knowledge on the side of both parties and does leave you open to attack vectors such as people accessing your printer or the service you use to create the paper wallet.

People would also make backups and recover the funds before you do and a host of other trust issues.

Paper wallets are cool experimentations and a fun way to transfer Bitcoin between trusted parties, but I don't see this as a good method for commerce.

Bitcoin hardware wallets aren't a new concept, there are devices such as Trezor, Cold Card and Ledger (which I personally use), and they're great for long term secure storage.

But why isn't there a device for short term storage? Well, there is now.

Opendime is a small USB stick that allows you to spend Bitcoin as you would physical cash. You can load up Bitcoin and pass it along multiple times.

If you approached a merchant or a friend and wanted to part with some Bitcoin, you could connect to any USB to check balance.

Then unseal the money and spend it.

The Opendime device is a read-only USB flash drive. Works with any computer, laptop, or phone. A QR Image and Text files inside contain Bitcoin address and helpful information.

The private key is generated inside the device and is never known to any human, not even you, making it far better than a paper wallet!

This means you can give an Opendime to anyone, and they don't need to worry that you can take back the funds later since the private key is strictly in the device itself.

This is physical Bitcoin in its early form, and I am sure it will be refined in the future. It's that simple as handing it over, No miner fees, no confirmation delays.

You can check out Opendime here no shilling or affiliations, just sharing my findings.