The bull market in Bitcoin was announced a while ago, I would even go as far as to say as soon as the halving happened in May last year, it was ready, set go, and everything was right on schedule as is the case with Bitcoins boring and riding monetary policy combined with human nature, loving a good old FOMO and chasing anything that is scarce.

People often talk about how hacking happens in cryptocurrency and stealing of funds. I think it's a fitting trait of crypto since to me Bitcoin is actually hacking humans, to get them to think in a different say.

None of us could predict what 2020 and 2021 would be like with this pandemic and slow down, which has changed the face of how we live. Many people are without work, cannot get back to work, are working from home, and slow down in money velocity has seen people who relied on cash flow to suffer the most.

Those who had a penny to spare are also worried, they want a place to put their money long term to net them a return, which banks cannot offer at a risk-free rate.

As economic growth slows so does equities in real terms, their income dries up, debt expands, and dividends dry up as they also feel the pinch of restricted money velocity.

If businesses and consumers, who are the lifeblood of any economy are both feeling the pinch, struggling to secure new cash flow and need to find a way to extend or protect their savings. They are naturally going to move to wealth protection assets. 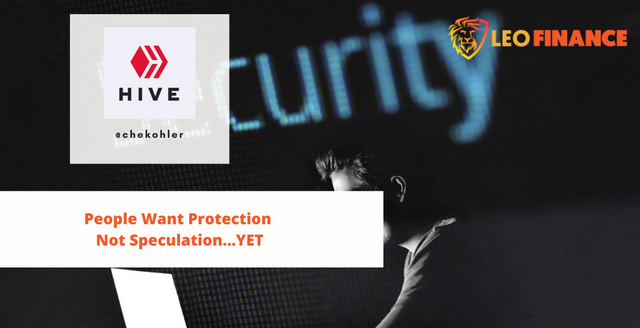 Precious metals and even commodities are now starting to enter their bull run as people look to anything tangible that can store wealth. Metals naturally have a track record of wealth storage. At the same time, commodities will bank on-demand increase for goods, services and infrastructure as we get back to work and look to stimulate the economy through new job creation.

This has been the case after many a recession, but this is the first real recession we've had with Bitcoin available to us. To me, Bitcoin is acting as sensibly as it would under any recession, people are flocking to the thing that has the most predictable monetary policy, and that is provably scarce.

Once they feel rich, they'll be willing to speculate

People are now asking me, well if Bitcoin is going up why aren't all the alts and here is my base case reasoning. If we look at the traditional economy when stocks go up, people feel rich, they sell their positions and reinvest to grow other companies, or they spend it on goods and service driving up economic growth.

This is the theory behind why money printing is good for stocks and the economy and how this weird idea of trickle-down is meant to play out, yet it doesn't really, only in a minute way and at what cost?

The purchasing power yous teal through inflation only to recycle it in a poor distribution model is silly, but that's a story for another time.

So take that theory and apply it to Bitcoin, if someone puts in $2000 at the beginning of the bull run and they're now up to $5000+ they feel rich. Now they're going to look at speculating.

The higher the fiats price goes, giving more retail investors paper gains grow they more likely they are to speculate in a more volatile asset. Bitcoin is still supplying growth, but as that slows down and growth is in the single percentage range, which happens in every bull market. People are going to take their newly earned riches and dump it into coins with razor-thin liquidity and pump up prices.

The average retail investor only goes by two numbers, % increase and nominal fiat dollar value increase, chasing those two figures up with irrational confidence always happens in every bull run.

When assets are overloved like that, it's time to get out!