Terra Is Not Decentralised

People in the cryptocurrency sector have the memory of the goldfish and way too much money to gamble. I am not only talking about retail traders, but also founders and venture capital who for some reason love to repeat the same mistakes over and over. Terra reminds me a lot of the EOS and TRON of this cycle, both chains are pretty much walking dead.

I've said that before in previous posts, the only difference with Terra is that it had a native stablecoin backed their native governance, something Dan Larimar started with STEEM and STEEM backed dollars years ago, and look how well that turned out.

Do you realise STEEM used to have a billion-dollar market cap? Now its worth a quater fo that if they lucky, it's an after thought these days.

So what makes you think Terra is different?

Do you realise EOS was the biggest ICO at the time crushing a billion raised and all they did was launch a shitcoin and buy voice.com from Michael Saylor and we never heard from it again. So what makes you think Terra is differnt? 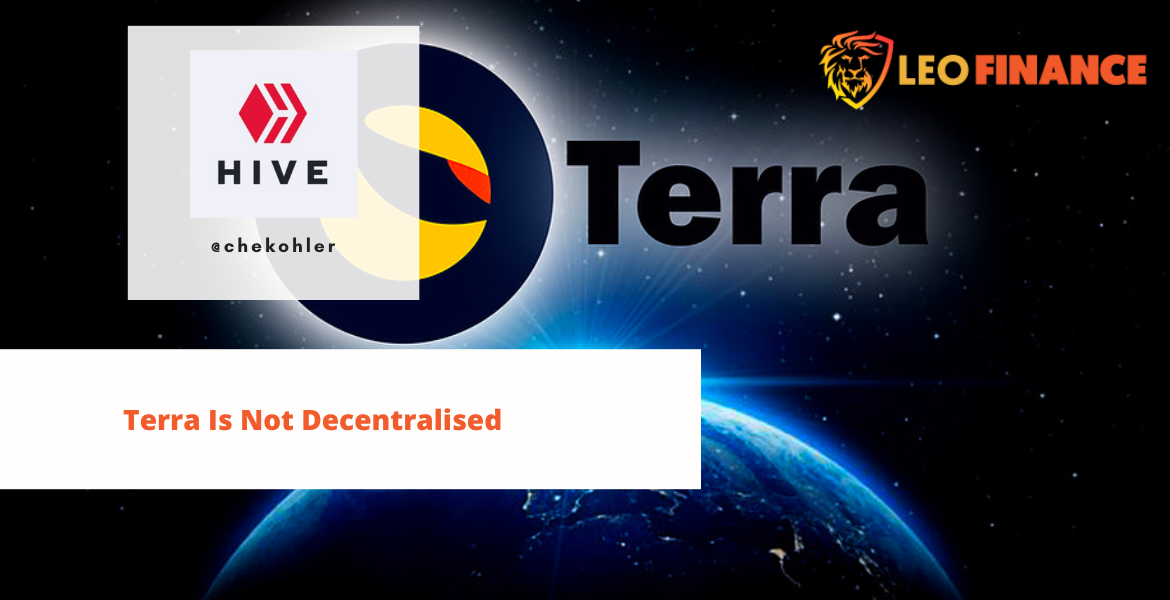 I've seen plenty of shilling of Terra online by complete dumb dumbs who can't tell a ponzi from their pipi.

I've already discussed why UST is ponzi in nature here:

So I won't be going back into this, but the TLDR is UST and anchor is unustainable, everyone knows this, the people getting in are looking to clip that premium as soon as they can in a hope they won't be the bag holder.

Even Terra themselves have admitted that it's not and they are actively subsdising the yeilds with the idea that it gets so big that they won't need to sometime in the future. That's not a very solid plan but hey what do I know about running a ponzi?

Do you know that Bernie Madoff's ponzi was offering 12% a year while Woodbridge Group of Companies Ponzi was ovvering 5-10% a year?

How thick do you have to be to think 20% is sustainable?

I would assume very thick, I've seen dumb dumbs posting how they can keep adding to the ponzi and in 30 years become a millionaire from a $100 contribution, lol. Yes my dear, you discovered the wheel, fire and the perputual money machine at the same time.

Can kick nodes off the network

One shilling point I often hear from Terra shills is that their stablecoin is decentralised, don't use DAI it's backed by circle, don't use USDT its backed by Bitfinex and Tether, these have centralised choke points.

Terra has 130 validators and claims to be decentralised, the bitcoin liquid network side chain which doesn't claim to be decentralised has a Federation of 53 members that produce blocks for the chain, so to me, that's hardly much of a difference.

Apart from that, many of these validators are the same people in cahoots, it's merely decentralised theatre

you know what's a cartel? the @LidoFinance cartel.

Eth and Terra are now essentially run by the same group of institutions. it's a takeover happening under your eyes https://t.co/F7sKW9DelT pic.twitter.com/IdK6ofpR3x

Um okay, now explain to me if a network is decentralised, how has certain validators not part of the cabal reported that they have been kicked out of consensus? For a decentralised chain to work, all nodes must remain in consensus at all times.

Majority of tokens are pre-mined

If a network is decentralised, why would they issue over a billion dollars worth of tokens as a premine and even with the expansion of the chain and users coming to the network, the Terra foundation still retain 54% of the network, something no one can outcompete in a proof of stake system.

That's how proof of stake works, it's always has been and always will be a rent-seeking governance token. Something ETH wants to desperately move towards, hmmm I wonder why?

Founder has a shady history

I am not going to go deep into this but Do Kwon has had a shady past, his been in trouble with the SEC for minting his own securities on the mirror protocol. If you're willing to push things to those lengths, what else would you not be willing to do?

Terra buying bitcoin was a total PR stunt, a stunt they are using to buy off people and avoid criticism. A stunt they aim to repeat with purchases of other tokens and adding them to their so-called reserves.

The theory goes, why would I as a bitcoin holder hate on Terra now? They're buying bitcoin, they're pumping my bags and providing price support.

Well, I don't give a damn my dear, I'd much rather terra dump the price of bitcoin to the floor than support an open scam. The only bitcoiners who would fall for this aren't really bitcoiners, they're just speculators looking to get back out to fiat, anyway.

Anyone who supports this type of lunacy has no idea what they're talking about and only looking to repeat PR messaging and pass it off as their own thoughts. It's manufactured consensus and if you want to act like an NPC go right ahead.

Seriously? What more evidence would you like that Terra is a shitcoin? Do you even care? Probably not, because you think you're smart enough to pick your exits, and good luck with that.

People often say I am negative, and that my tone comes across as harsh, but when you see someone talking a fork and sticking it in the electric socket do you calmly explain why it's wrong?

I am not here to save you, only you can save you. All I can say is that here's one of the warning signs and should you choose to ignore it, I wish you the best of luck.

And when you get rekt, I'll have no sympathy for you either. You went full retard.