I'm still playing the Clash Of Streamers Mobile Blockchain NFT Game and after nearly half a year of playing 10-15 minutes Daily, I still very much enjoy the experience it provides and I actually even like it more and more as I continue to learn new things. This is a guide to Deals and Sale Points in the game...

For those that are new to this game who want more info, also check:

Clash of Streamers right now despite having a ton of deals and microtransactions is currently really friendly for those that want to stay free2play. The basic concept is that as a player you grow your account getting stronger and stronger heroes. To do this, every player gets roughly ~100$ worth of free progress each day (at a non-discount price). Skill comes into play on how to most optimally use this to grow as quickly as possible toward the end-game where money can be made by exporting NFTs. The Deals and microtransactions come in as a way for players to 'progress faster'. So the longer someone waits to start playing the game, the more is missed out on potential progress even though players that come in later get compensated by getting more luck in the game allowing them to catch up to over time to the part of the progress they missed out on.

The idea behind Sale Points is that you collect them by making purchases in the game or refer players that join your community and do end up spending in the game. These sale points give a % discount on in-game purchases with 25 Sale points allowing players to get any deal (regardless of the price) for free. The key to deals and spending money in the game efficiently is to get cheap deals that include Sale Points using those to buy the expensive deals which will give most progress for free. This way, those that play it really smart will be able to speed up their progress like crazy without really being required to spend money.

Getting Free Stuff by Checking Deals 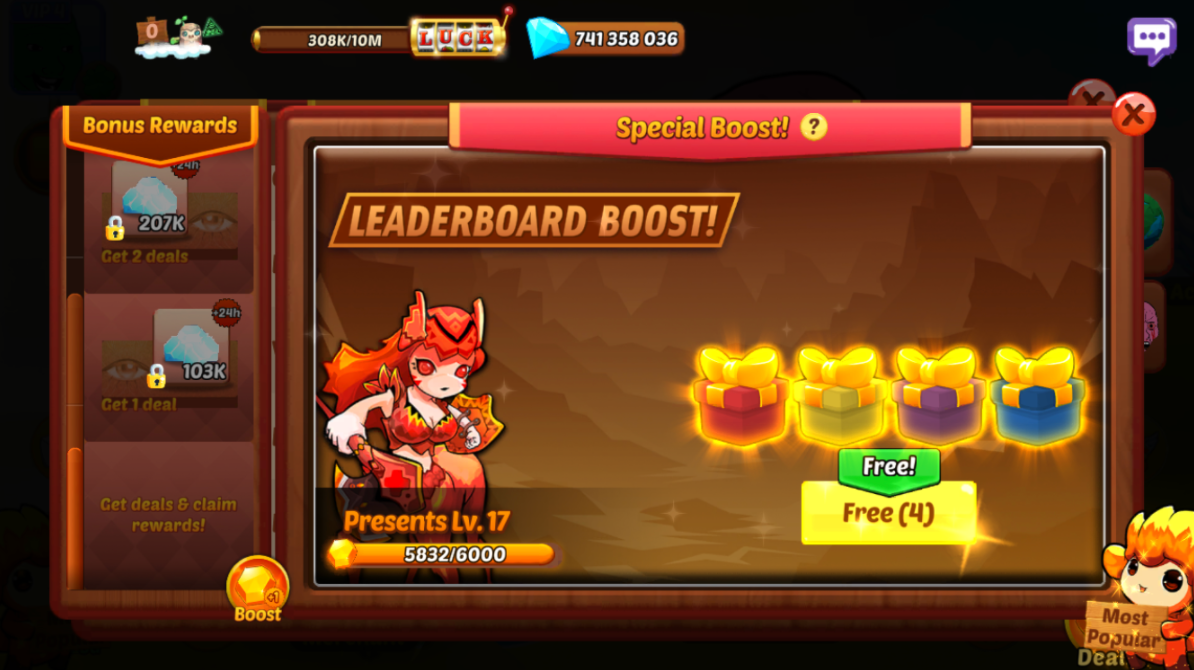 There are a ton of different deals in the game and some are only available for a very brief amount of time. The game has a very smart mechanic where players can claim free gems and chips just by checking all the different deals daily. Tapping to get rewards is a big part of the gameplay and these free rewards mix in very well to remind players that it's possible to spend in the game showing them all the deals without it being annoying since they get rewarded for doing so. 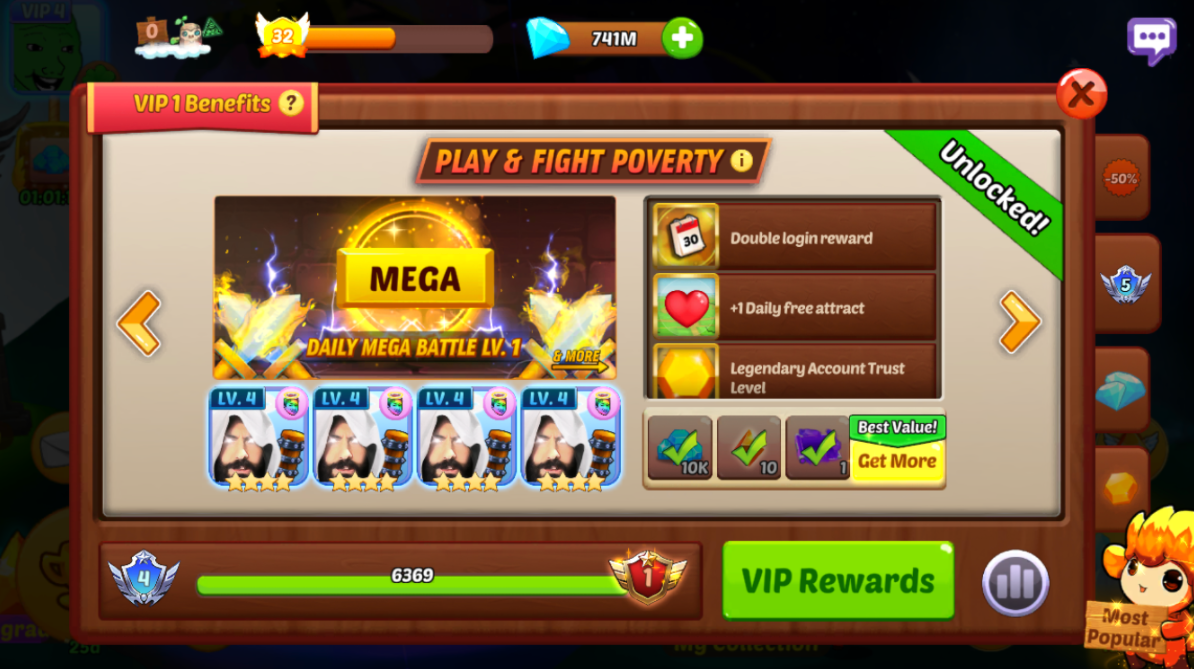 The more (or the smarter) a player spends, the higher VIP level they can reach which gives a ton of benefits to progress faster in the game. Reaching at least VIP Level 1 is highly recommended as it allows players to get the 345k Gems daily without having to waste time watching the 5 ads and it will give double daily login rewards and unlocks the daily VIP 1 Market Trade. The higher levels mainly give major boosts in Trust score which helps to get better loot. Every purchase in the game also includes VIP points depending on the price it costs. 99€ Deals most of the time include +1000 VIP points and it's recommended to use sale points on those which makes it possible to reach higher VIP Levels with minimal spending. If I'm not mistaken, VIP level 1 only requires 200 VIP Experience and once you reach a certain VIP level the rewards this gives is permanent.

Best Deals in the Game! 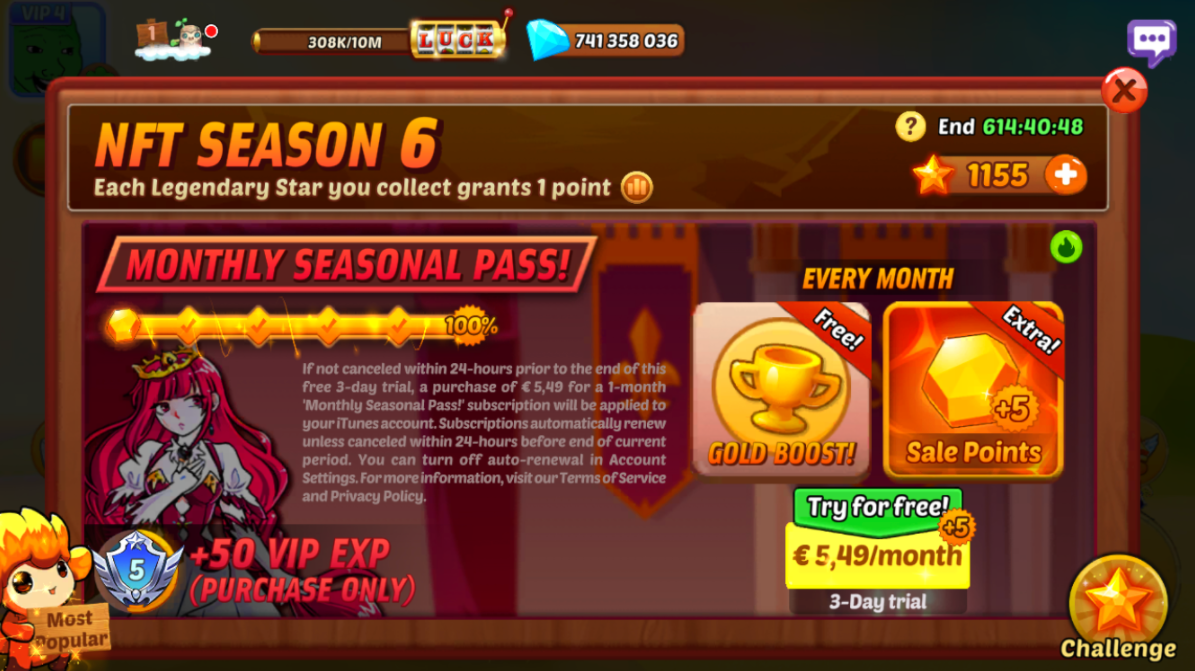 By far the best deal in the game is the season Golden Boost which costs 4.99€ giving extra rewards for collecting Legendary Start during a Season. This deal gives 50 VIP Experience, quite a lot of gems & Kappa Scrolls, and a Level 9 Hero plus 25 Sale points which allows you to get any other deal in the game. Once you completed the season quest, you are also able to use the 25 Sale points to reset the season challenge getting all this a 2nd time including the 25 sale points. (All rewards are given at the end of the season even to those that didn't manage to complete it). Don't make the mistake I made instantly getting an expensive deal after getting your first 25 sale points but renew the season challenge instead which will get you the 25 Sale points when you complete it or when the season ends making your able to get a lot more out of it.

So basically a player can spend 4.99€ once and renew it for free each and every month from there on out. Buying the Monthly Seasonal Pass which costs 5.49€ includes the Golden Boost and works with an automatic payment giving players +5 Sale Points extra each month. for 0.49€ that is an absolute steal.

There are multiple deals in the game that over time give more than 25 Sale points which makes them basically free when using the 25 sale points to buy them. These deals include the Prestige Boost & The Insanity Boost.

Expensive Deals to Get For Free With 25 Sale Points. 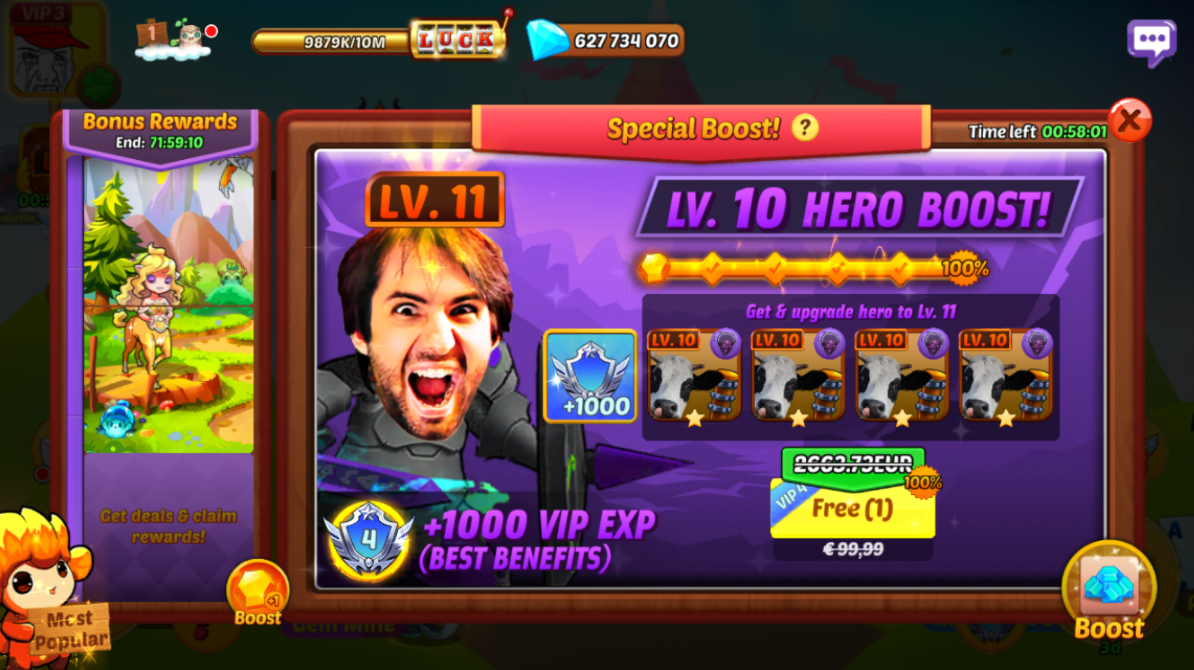 The best visible deals that are available at any time in the game can be found in the Treats & Presents Building. They cost 99.99€ (or 25 Sale Points) and include +1000 VIPO Experience along with 5000 Crypton (which is the highest valued in-game currency that is needed to export to the blockchain). I did get these deals at first trading them for 25 sale points which was a mistake as there sometimes are periodical deals available in the game that offer a better deal. One of them was a Special Boost giving +1000 VIP Experience along with 4 Level 10 1 Star Heroes which massively help to make progress. I have only seen this deal once though. There is also a 99.99€ deal from time to time that includes ~7000 Crypton.

So basically you want to have 25 Sale points on the side to get into deals that from time to time pop up in the game with a limited window when you are able to actually buy them.

The game has merchants and events where gems or chips can be traded for an amount that is higher than what you pay for them (Example pay 2 Mega Chips & Get 3 in Return). These deals also exist for Sale points and are said to be available around Christmas & New Year and also on the 9th of June which is the birthday of the main Dev. Having Sale Points Available at this time will allow free2play players to get more allowing them to optimize their progress. 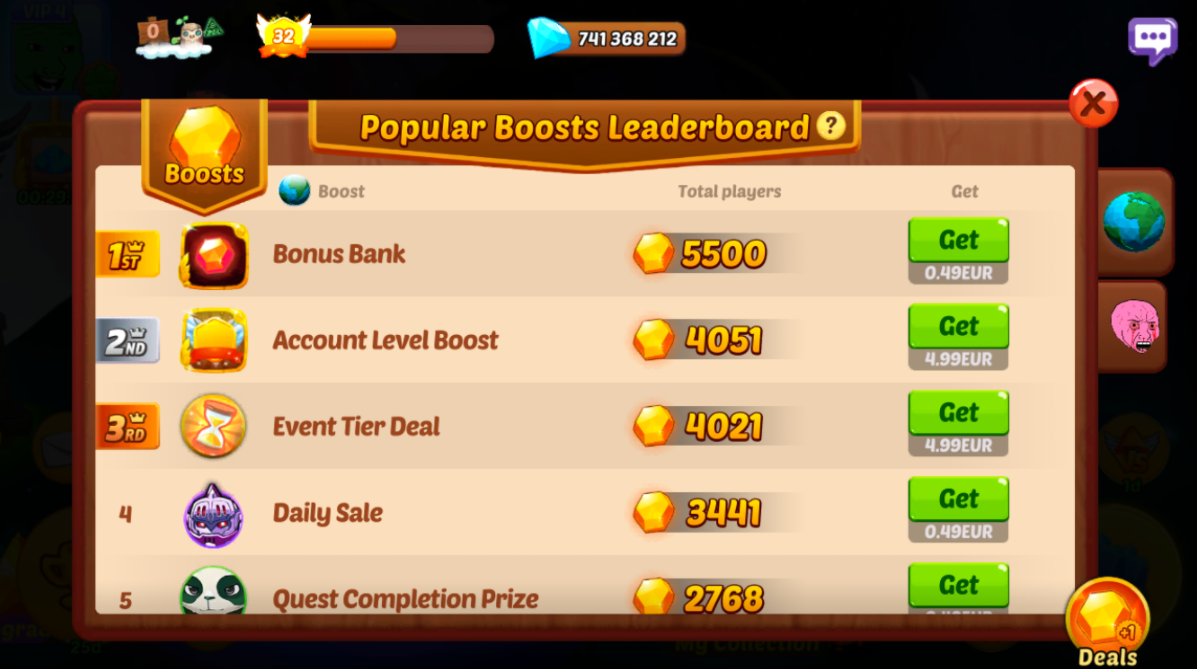 The game has a building where there is a leaderboard of all the most popular deals that have been bought by players which makes it easy to find the most valuable ones that are available at any given time in the game. You can find this building clicking the pet that holds a sign saying 'Most Popular' on pages where a deal is displayed. There are 2 leaderboards that can be switched between in deals that just require a single payment and subscription deals that require an automatic payment.

Playing it smart gets you a long way in Clash Of Streamers without players being required to spend a lot of money. Understanding how both Deals and Sale Points work is a vital part of the gameplay and optimizing the pace of progression someone can make in the game. The basic idea is to get cheap deals that include sale points spending those wisely to get the expensive deals for free. The game is made in a very smart way that will make you want to spend money as it very well taps into addiction psychology so be aware of this as there is no guarantee it will play out in a way where those that spend tons of money now will be able to earn more back later down the line. See this article as a basic guide with likely better ways to optimize this even more.