What'll be your net $value, if you lock $100 worth xPolyCub into vexPolyCub for 2 years

Hello LeoFinance ecosystem!
It's just amazing looking for the right formula and platform that'll lead me into the financial freedom that I've desired even before joining the Hive blockchain. 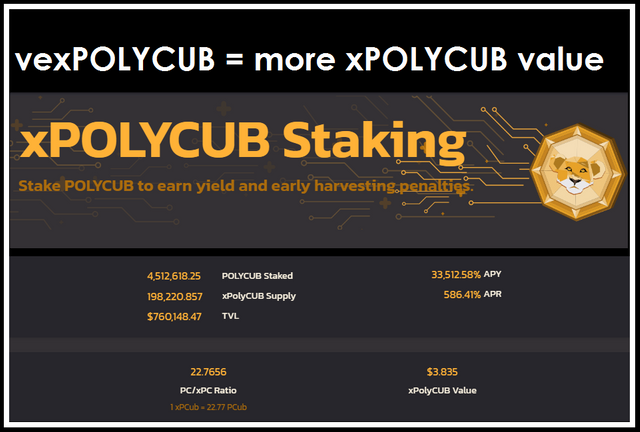 After my study on PolyCUB and xPolyCub, I've realized that the PolyCUB project is the right place or platform to invest my capital/hive rewards in order to attain that financial freedom that I desire.

What's PolyCUB?
PolyCUB to me is a DeFi 2.0 platform that's projected for yield optimizing goal. With the long term goal of PolyCUB from it's inception, has proven that it'll take a gradual process to unlock all the goodies that's in PolyCUB as a platform.

Why is PolyCUB the right platform to invest in?
One of the uniqueness of the PolyCUB project, is in its multi-chain bridge tokenized platforms. Diversification is one of the tools that helps a platform grow. PolyCUB is a diversified platform with value create at its peak. This alone is key to know that PolyCUB is the right place.

With pHBD-USDC vault currently bringing more values to both the PolyCUB holders (29% APR + xPolyCub governance) and to the platform (0.1 HBD Pol, 0.25% wrapping and unwrapping fees), you can be assured to cash out from the project.

I saw this formula in one of the post Let's talk VeXPolycub Global unlock yesterday written by @myfreebtc and decided to try something out.

According to the analysis by @myfreebtc:

Put yourself in my shoes, lock $1,000 into Vexpolycub, and unlock $10,000+ two years later. I would take some profits, not 100% for sure but at least 25% minimum. I'm loyal to Leofinance but I'm here to make money, the crypto markets thought me to take profits every now and then.
Let's say 50% of all Polycub is into VexPolycub and investors dump on average 20%. That would result in 10% of the entire supply being dumped at once (Not accounting for the possible pre-dump on my first point).Source

My only challenge is the fact that the crypto market can be so volatile and two years period one cannot tell exactly what'll happen in the market.

But all things being equal and having a positive mindsets, then, my financial freedom will become a dream come true.

I'll end this by saying, risk is part of the cryptoverse and not taking risk is risky in itself, so, I'll prefer to plan and save up to $100 worth xPolyCub in order to lock it up in my vexPolyCub to attain my goal.

I believe in the LeoFinance project, what about you?

Do I believe in vexPolyCub?
You will see my answer on the first day of vexPolyVub launch

Thank you @onealfa.leo for your support.

Polycub has one of the best tokenomics without a doubt. It will take a while to liftoff but it will happen as the project owned liquidity and utility keep growing.

The 20% guaranteed apy on VexPolycub is an excellent deal! I will throw some of my XPoly into the vault.

Thanks for that wonderful post yesterday, it gave me some inspiration.

For PolyCUB, it's one of the joy giver in this bear season. I'm a believer of PolyCUB and it's components. vexPolyCub will truly be awesome and moving xPolyCub to vexPolyCub will help transform the lives of those that believe in it.

Congratulations @creativehive! You have completed the following achievement on the Hive blockchain and have been rewarded with new badge(s):