Should We Be Worried?

Why should we not be surprised as Centralised Exchanges are dominating the news this bear cycle.

I saw the news come through my Twitter feed today that Metamask are now going to track your IP Address when you do any transactions. What did we expect as crypto is so far from being decentralised it is untrue. It does state if you use Infura which I have no clue and was reaching out if anyone has suggestions or advice. 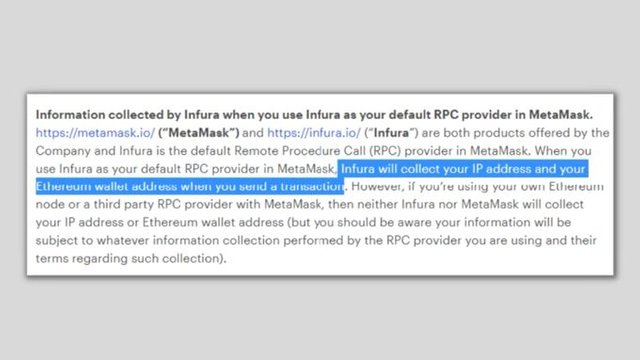 When I look at my portfolio I have one project that is decentralised and this gives me a warm and fuzzy feeling as this is my biggest bag being Hive. I have tried to stay in the shadows as much as possible, but these days it is not very easy to do. KYC this and KYC that so if you want to be involved you don't have much choice.

The only thing I have done is manage to not show a pathway from FIAT to Crypto as there is no footprint. However saying that my footprint must be all over the place having signed up to Coti and Binance doing KYC. When you think about it this is not so smart but then what choices do we have right now. I think we all know regulation is coming whether we like it or not and maybe sooner than later. Remember they want to help protect us which we all know is pure garbage and is more about making life more difficult whilst trying to scoop what we own through unfair taxation policies.

I cannot recall what details Metamask asked for when I signed up either as the only reason I did this was because of getting involved in the Leofinance Kingdoms. So basically every time you log in now they are gathering information on you. I suppose as long as you don't withdraw then they don't know how much you have or I may be wrong on that count as well. When someone is gathering data like this it only means one thing and that someone has asked for this info either for themselves or for the powers above.

All of this is doing one thing and that is highlighting how much of a gem Hive really is as we are under the radar in so many ways. You can be on Hive for 5 years and no one would have a clue unless you started sending funds out which may trigger something externally as that is the problem. We are surrounded by centralised infrastructure as soon as we leave the comfort of the Hive blockchain.

I have looked for routes out of crypto, but haven't really found one I am happy with as the hope was things may change for the better with new development opening up other choices. Maybe it is not such a bad idea having a few obvious smaller investments like my Cub portfolio on offer showing I don't have very much and could be used as a diversion. Funny how you start to think as nobody knows how good or bad things will be in 18 months time as I don't trust the system and why I want out permanently. One of the many reasons I never joined FaceBook as people give far too much information away without even know they are doing it. Data is big business and has been for many years already as someone will pay for this info.

When I first heard about Kraken, I thought it will be a discrete and powerful way to align people and empower them with more financial resources, or at least easier and with ownership over their data. When I entered crypto and blockchain as a way fo living, I thought I will also have more and more decentralized, free, discrete ways to make my way of living without KYC everywhere (like dog s...it), data being stolen (what I do not accept to, it is a stolen from me)...and now that sneaky fox...like it wasn't enough. I want Data sovereignty = "people's right to self-determination, autonomy, and control over personal data about themselves." Thank you for a great post!

Pleasure and thank you for the kind words. Discrete living lol is not going to happen I am afraid as in order to make this work you will have your footprint everywhere.

I suppose you are right. Then a decent living for me, my mother and my little sisters would do just fine. :) Thank you for being supportive!

We get more and more signs lately that centralized entities are after as much control as possible they can get over crypto. Noncustodial wallets are what we should have been focused on for so long. Looks like even DeFi is not that decentralized...

DeFi is no different as it is exactly the same. Decentralised finance my arse as it is misleading.

For the moment I have switched my RPC to https://ethereum.publicnode.com/ , and it works well

Good as I was hoping for some advice on what to do. Thankyou much appreciated.

let me know if you need more help

Such data anyhow can be captured without us knowing, so having Metamask say that clearly is not a worry in any way. I don't think we can have full decentralization and anonymity, thus with regularization probably more info will be collected, but at the same time maybe more protection will be added for the investors.

Just wondering, but is that only applied to ETH? I don't use ETH so it might not be an issue for me but I guess I don't know if the other blockchain RPCs are also centralized.

Ah what a telling reveal, own the by JP Morgan now it all makes sense. They are absolutely going to say it’s about “safety” but we know that’s a load of shit.
I did read that switching to a particular node works and looks like someone offered up one that helps so that’s good. I wonder if there will be more alternatives to wallet apps like Metamask for people to start to switch over to.