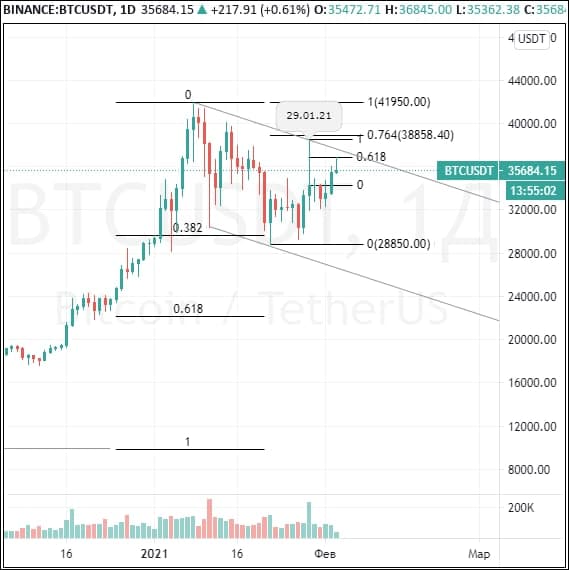 The new week has started off well for cryptocurrencies. In 52 hours, the price of bitcoin recovered by 14%, to $ 36,845. The pullback to the fall from $ 38,531 to $ 32,171 was almost 76%. Ether updated its all-time high at $ 1571 with the support of the ETH / BTC pair. Interestingly, the crypto has strengthened on the rising dollar and flight from risky assets. It seems that the market is preparing for a new rally.

According to the latest news, MicroStrategy and GrayScale continue to buy Bitcoin. MicroStrategy additionally purchased 295 bitcoins at an average price of $ 33,808. The company owns 71,079 BTC in total. GrayScale has bought 1,823 bitcoins in the last 7 days. Now the company has 649.11 thousand BTC.

On the daily timeframe, buyers covered 62% of the January 29 upper shadow. If you look at similar scenarios on lower time frames (daily data is not enough for analyzing patterns), the price has repeatedly moved in the opposite direction from the fibo level.

I believe that Bitcoin is not ready to renew the maximum of $ 41,950 (Binance) right now. Another week needs to be flattened to unload the weekly indicators. Now buyers are faced with the task of keeping the defense above $ 33,600 for 2-3 days. If buyers exceed the maximum of $ 38,531 on Wednesday or Thursday, then this may also lead to another test of the 30K level or rise according to the movement pattern on September 23 to October 22, 2020. The price is slowly gaining acceleration and going up. Favorable time for a new rally after February 8th.