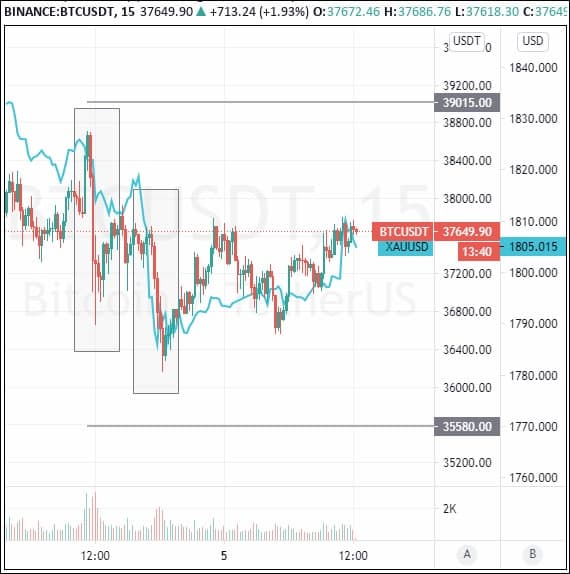 On Thursday, February 5, at the end of the day, bitcoin fell in price against USDT by 1.81%. During the day, the price dropped to $ 36161. The weakening of Bitcoin and other cryptocurrencies coincided with a sharp drop in gold and a rise in the yield on 10-year US bonds.

Decade yields rose 6.65% to 1.1546 amid rising expectations for huge US fiscal spending. They are also credited with mass vaccination, which they say the US economy will quickly recover. Against this background, the S & P500 index updated its all-time high.

In the European session, buyers closed the fall in 5 hours. The price is trading near the trend line at 37689 (+ 2.03%). The external background for the cue ball is not bad. The dollar is in the red against major currencies, gold rises in price, the profitability of 10-year contracts is declining.

If bitcoin again has a connection with other assets, then today it is worth paying attention to the release of American statistics. At 16:30 Moscow time, there will be a report on the employment market for January. It has a strong impact on the dollar, but no longer than 3 hours. I still have ambiguous signals for growth.

ETH has a better situation due to the growth of the ETH/BTC pair. On the air, I canceled and removed TP from 1900. I am looking at the level of 2800.