It's been a busy old month for us lions. Cubdefi.com launched and for weeks after there hasn't been much talk of much else. So much so that I hopped over to curate on Hive for a bit to escape the flood of CUB articles.

That's not to say that I didn't get involved though.

I was probably going to continue forwards without writing about my CUB experience but I found @crystalhuman's #CubContest, Entry requirements found here

Anybody that knows me knows that I love a good meme so had to get involved. This is however my first time creating a .gif meme. Lessons learned? I have the patience to create them frame by frame, but my software doesn't have the capability. This is definitely something I'll revisit with my laptop rather than my phone.

Anyway, onto my Cubdefi experience!

CUB has been several firsts for me, my first defi investment and my first ever airdrop. And I have to say even though my airdrop claim was only 0.9 CUB it felt good finally being early for something. 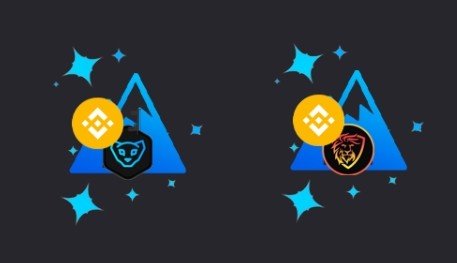 I decided to go for the CUB-BNB and bLEO-BNB liquidity pools for the first couple of days. The timing worked out nicely for me as only a couple of days before I had bought $300 of BNB to hodl, thanks to that I was in a position to quickly send to my wallet and stake to the pools while a lot of people were still trying to get on the smart chain.

The first couple of days were spent harvesting and selling to buy BNB to stake in the BNB den. I did this to recoup the transaction fees and as a safeguard against CUB price not taking off. In hindsight it would have been nice to pack my bag with more CUB but I won't beat myself up for playing it safe.

Once the APRs started dropping I did some reading and learned about impermanent loss, I quickly realised that defi liquidity pools are absolutely not for blindly hodling and withdrew to the safety of the dens. Despite the much lower rates my job takes up too much time for me to do anything but hodl.

My current plan is an attempt to solve that horrible question: when to sell?. Sell too early and you'll be kicking yourself at what you could have had, or hodl on for so long waiting for a price surge that might never happen.

I have two bags. One that I'll sell when the value will buy me a nice semi-luxury car. And the other for some serious hodling. Either way I'm in this for the long term.

This is where the pedigree of CUB comes in. I feel safe to leave my precious CUB in the den because I trust the team behind it. They have big visions for the kingdom they're building and recognise that while a rug pull would net them a lot of cash, in the long run they'll make a hell of a lot more through growing the platforms. I honestly believe we're one high profile tweet or exchange listing away from going ballistic.