Do you know why the reward amounts on Leofinance and PeakD frontends are different?

As a newcomer in Hive, I am just glad for any author's reward I can get my hands on and I am not too concerned about how they derived.

But something piqued my curiosity and I learned something today.

In case newcomers have a question about why the rewards seem different depending on where the account is accessed from, say, from Leofinance and PeakD, this post documents my little CIA work in an attempt to figure things out. 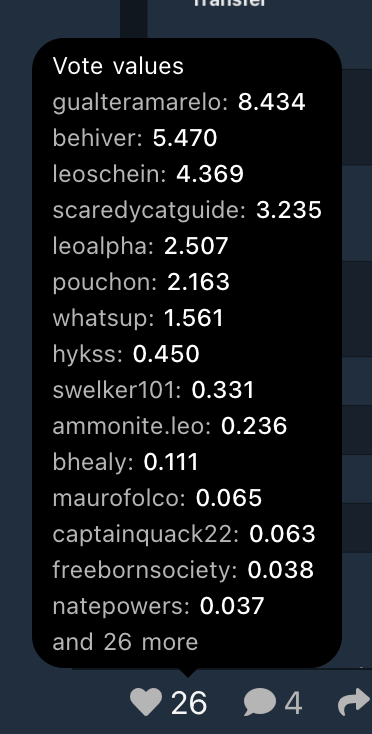 The addition of the vote values is also about right, adding up to about 4 to 5 in value, which I figured is in HIVE.

Comparing the order in which the account names appear made me realize for the first time that these posts are attributed with 29.41 LEO and 4.48 HIVE thus far, thanks to these curators. Thank you, curators!

The reason why the order differs is because the amount staked by these curators in LEO and in HIVE differs. Someone could be heavily staked in LEO but not in HIVE, so his/her ranking in the list is LEO will be higher than in PeakD.

At the end of the day, what matters is that I am getting some payout in LEO and in HIVE because some of these curators have staked both LEO and HIVE!

For completion sake, I checked out the situation in the Proofofbrain portal. The payout there is going to be negligible. Period.

My biggest takeaway after this exercise is that if my writings are about cryptocurrency investing and most readers will be reading from Leofinance, then it makes sense to stake more in LEO to help curate other's posts in Leofinance.

Things like this isn't obvious to the newcomers to Hive, so I hope this is useful. Again, none of these constitute financial advice. Please do your own due diligence.

Yes, this is a great question and newcomers may wonder.

LEO and Hive are 2 separate rewards pools. When you post on LeoFinance.io - a second-layer Web3 community - you earn LEO but your post also earns normal HIVE rewards. Both pools operate independently of each other as some users have LEO POWER and others have HIVE POWER and you have the chance to be curated on both communities.

Congratulations @cryptothesis! You have completed the following achievement on the Hive blockchain and have been rewarded with new badge(s):

Also, Leovoter only votes if the post originates on the Leo frontend.

Arrrgh! No wonder they have been missing my great posts! Hahah

I find the second layer token idea pretty interesting. I can see a point when the second layer is more important than the base layer. In reality, that's already true. There's a lot more $ volume in regard to Splinterlands than Hive, at least in the true since of an economy.

Check for bonus treasure tokens by entering your username at an H-E explorer or take a look at your wallet.

Read about Hivebits (HBIT) or read the story of Wusang: Isle of Blaq.