The Bitcoin VS Ethereum is always an interesting debate! Will Ethereum surpass Bitcoin market cap? The flippening! Will Ethereum be more valuable than Bitcoin?

Let’s take a look at some on chain data in the last period. 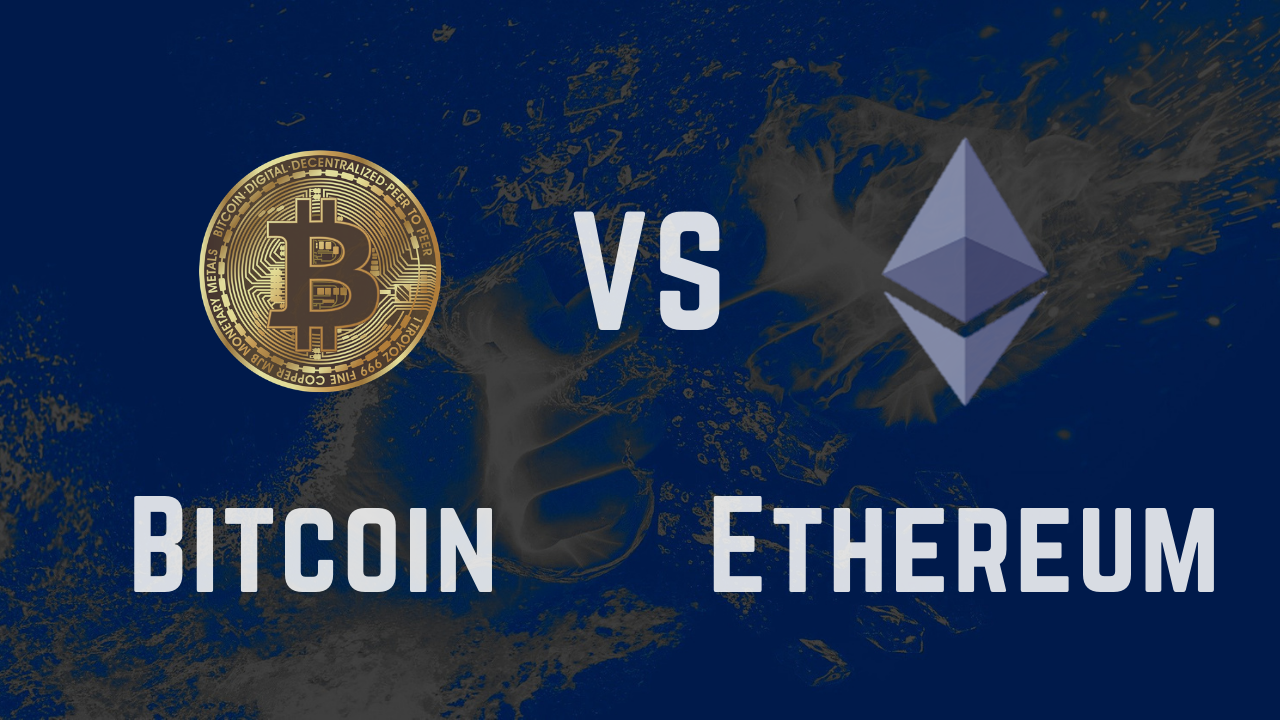 We will be looking at data for:

The data is extracted from https://www.blockchain.com/charts and https://ethscan.com/, for the period July 2015 – April 2021.

Although Bitcoin is around since 2009, Ethereum started with operation in 2015 and from then forward we will be making the comparisons.

Here is the chart for the number of unique wallets on Bitcoin and Ethereum. 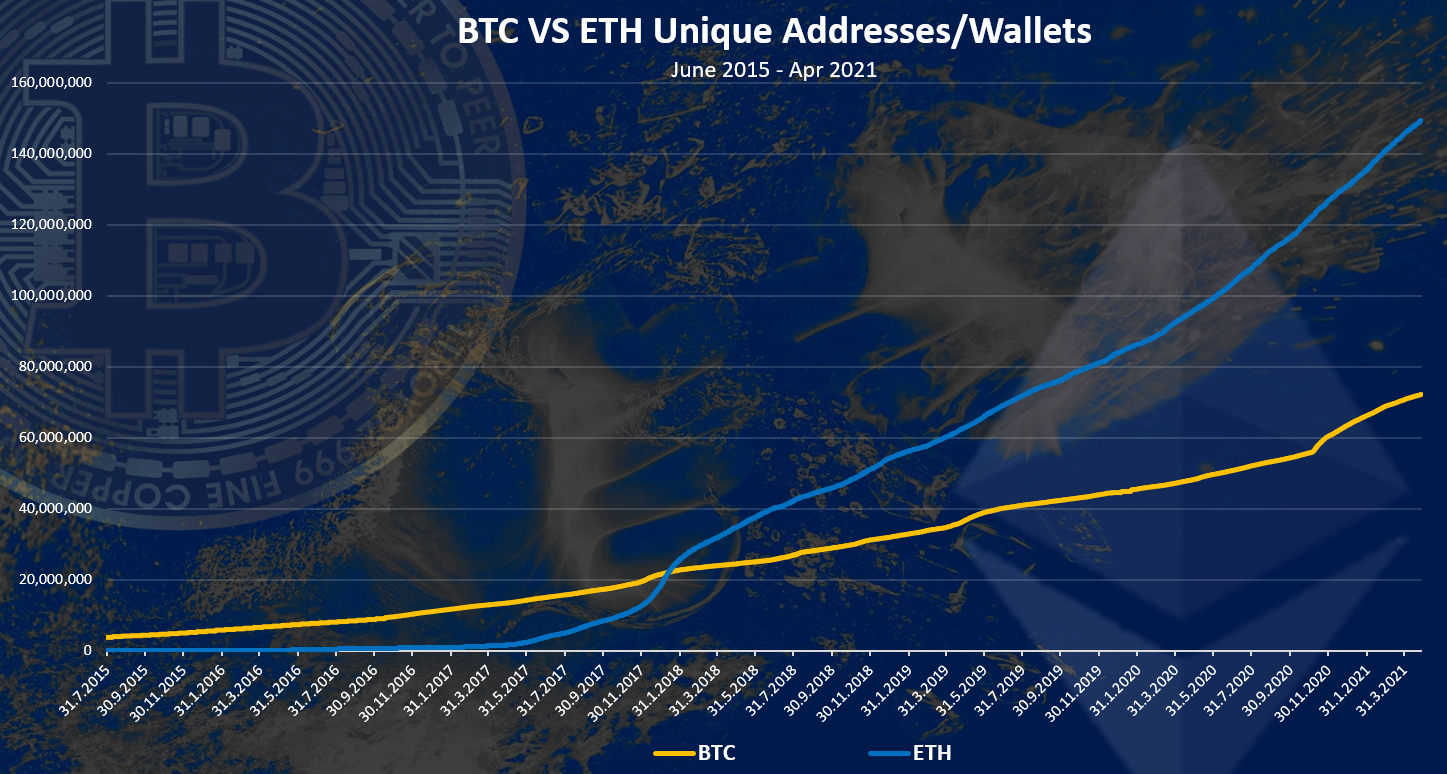 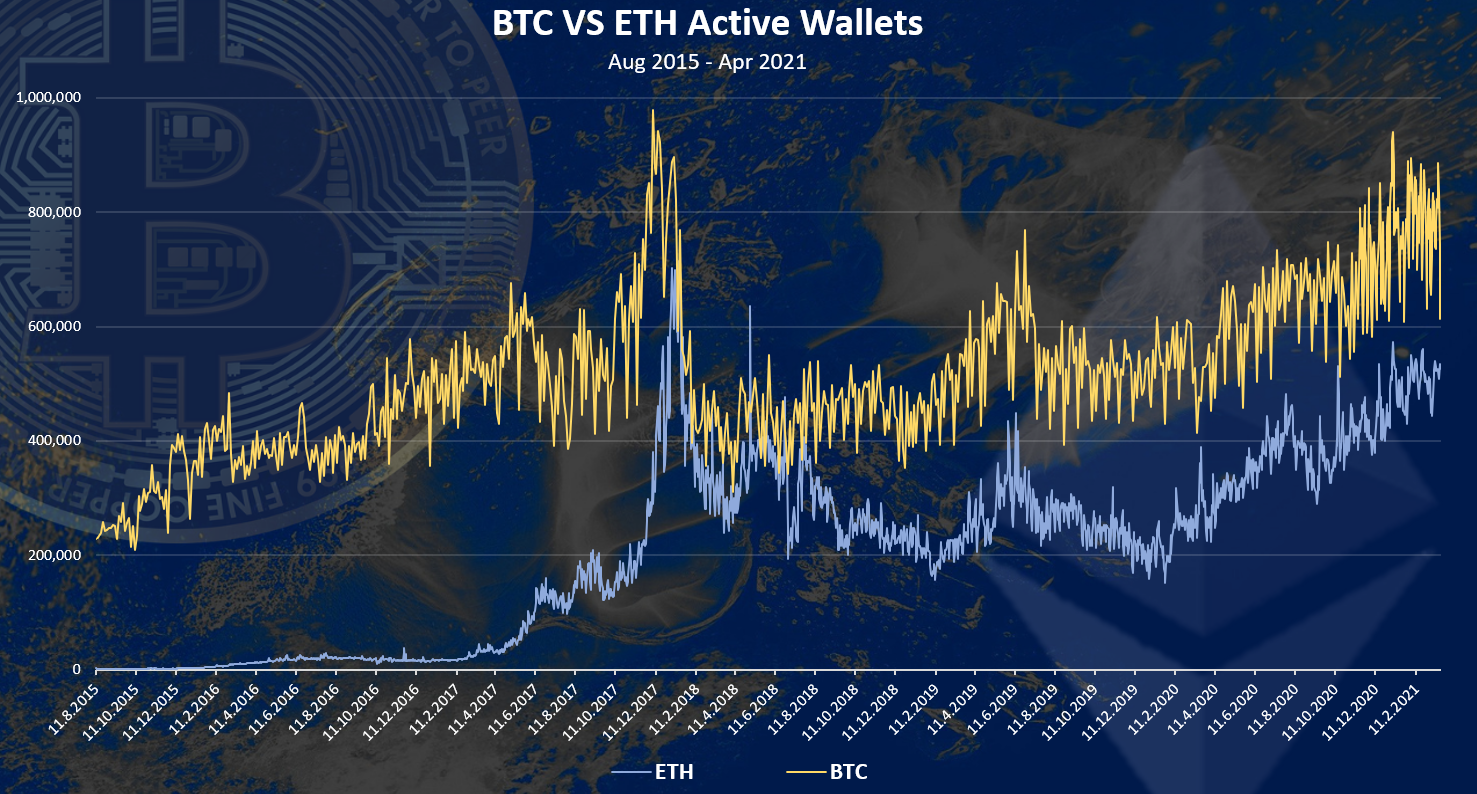 When we look at the numbers of active wallets Bitcoin is in the lead. Ethereum has come close to Bitcoin in the previous bull run, at the end of 2017 and the beginning of 2018. At that time Bitcoin has reached more then 900k active wallets, and Ethereum around 700k active daily wallets.

These numbers haven’t been reached yet in this bull run, but the numbers are very close. Bitcoin has been in the range of 600k to 800k active daily wallets, while Ethereum has reached 500k active wallets.

Will be interesting to see how high these numbers will go in this year.

Here is the chart for the number of daily transactions. 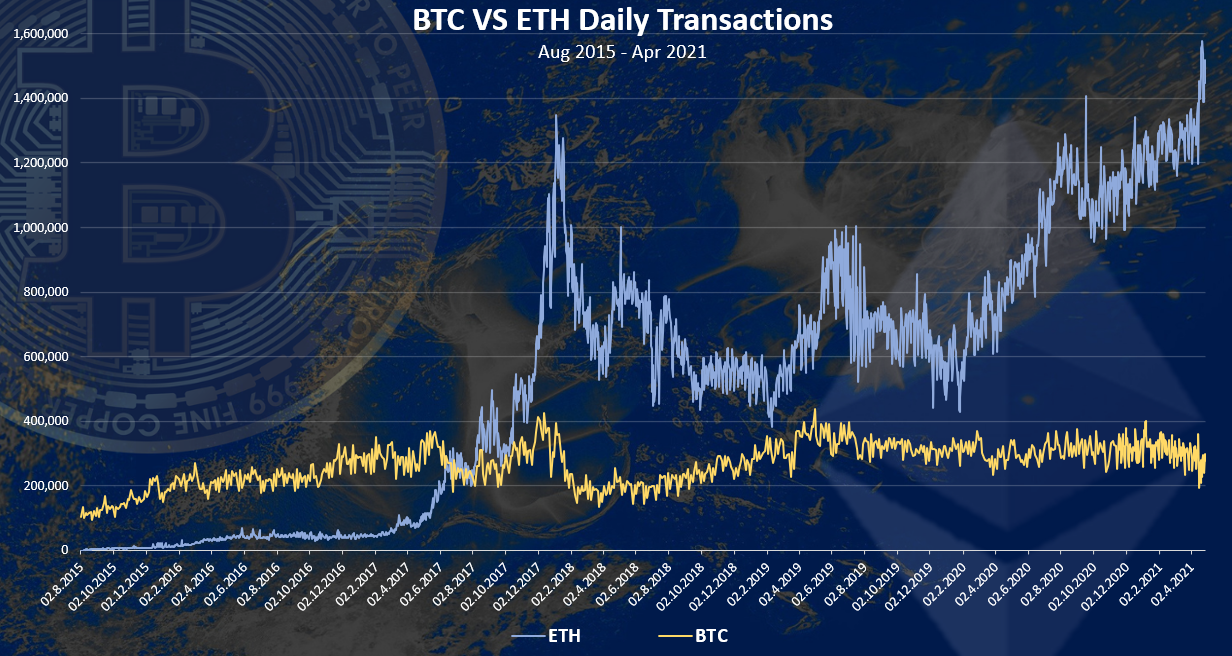 In terms of daily transactions Ethereum is now in a big lead in front of Bitcoin.

As we know Ethereum as a smart contracts platform has a lot of different operations and transactions that can be made on chain, while Bitcoin is been used only for one purpose, and that is transferring tokens from one wallet to another.

Ethereum has a smaller number of daily active wallets than Bitcoin, but obviously those wallets are making much more transactions then the Bitcoin wallets. 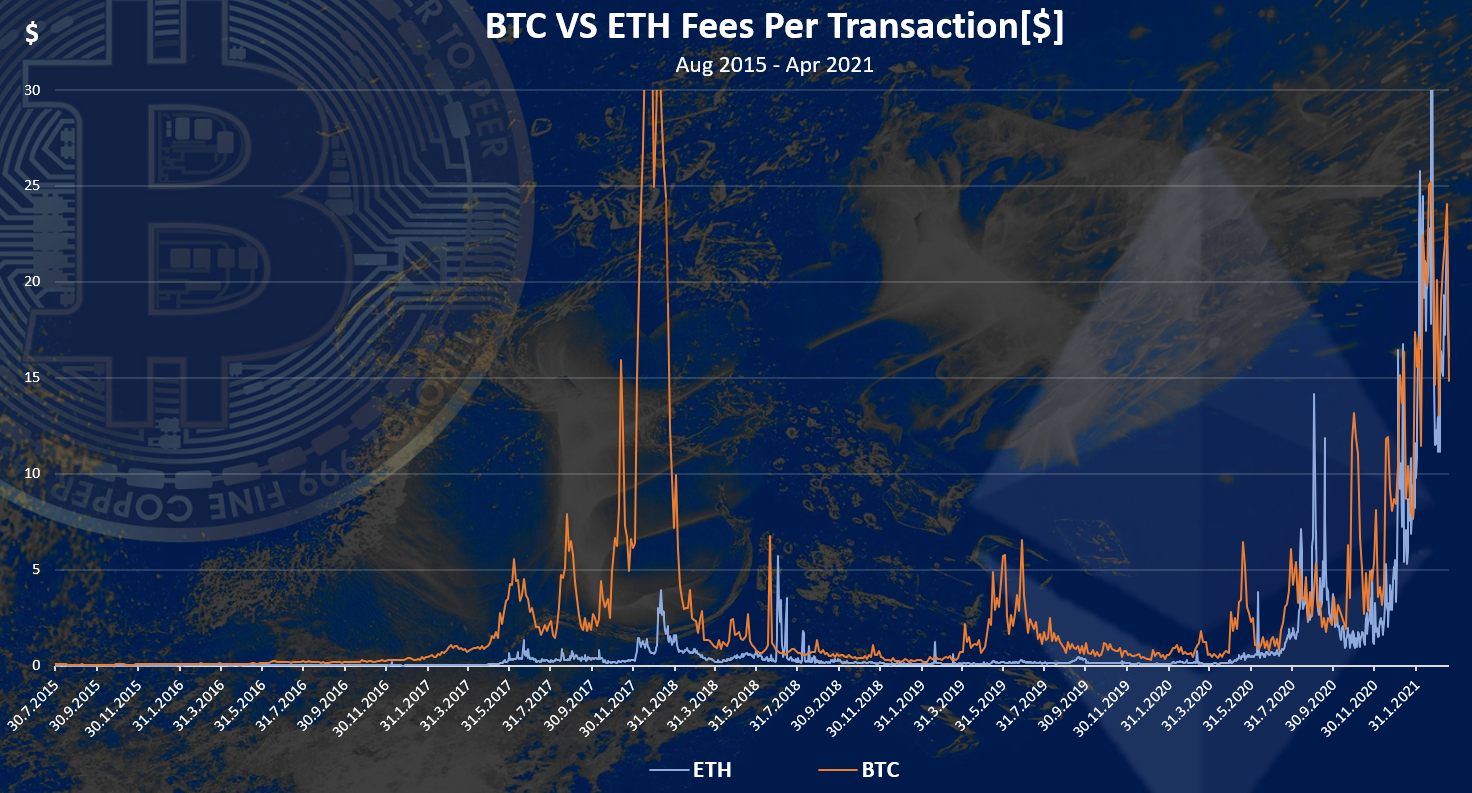 These are the average daily fees per transaction in $ value.

These days both, Bitcoin and Ethereum fees are increasing in parallel with Ethereum taking the lead.
The average fees for transactions in the last days are above 20$. For Ethereum the fee depends a lot on the type of operation, usually a lower fee for simple transfers, a higher fee for swaps on dexes like Uniswap, and even higher fee for minting NFTs etc.

The interesting topic for Bitcoin and Ethereum is the flippening, or will Ethereum surpass Bitcoin in terms of market cap and become no.1 crypto.

Here is the historical chart for the Bitcoin VS Ethereum market cap. 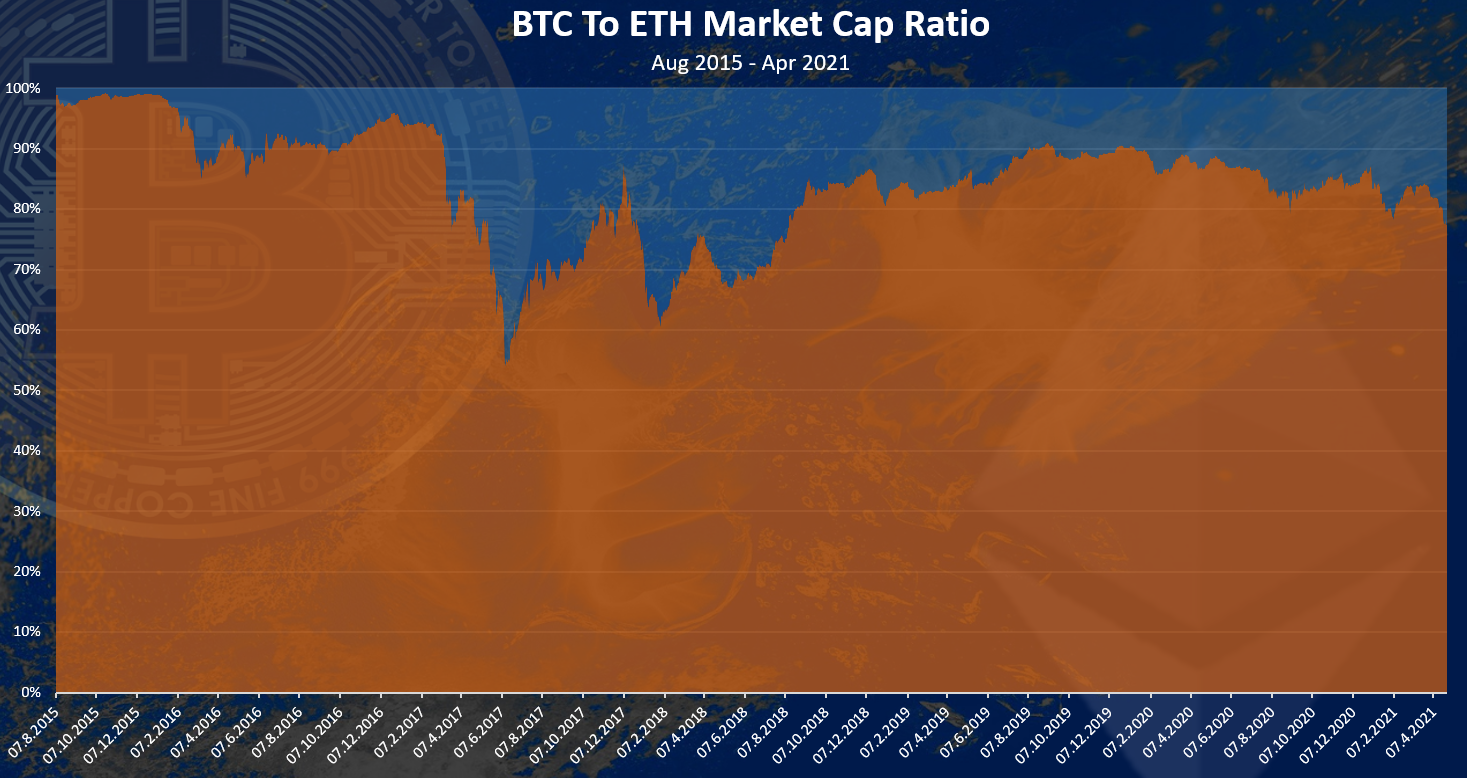 We can see that at first Ethereum has very low market cap compared to Bitcoin. As time progressed in the bull run of 2017 Ethereum has come close to the market cap of Bitcoin on few occasions, but only for a short amount of time.

In 2018 the ratio of Ethereum to Bitcoin market cap dropped from above 30%, to under 20% and it stayed there until now. In the last few days Ethereum has gained against Bitcoin and the ratio in market cap is now above 20% for the first time since 2018.

At the moment Ethereum has around 300 billions market cap, while Bitcoin is around one trillion.

On this date Bitcoin had a market cap of 43 billion and Ethereum 37 billion. This is before the major bull run that happened late in 2017. 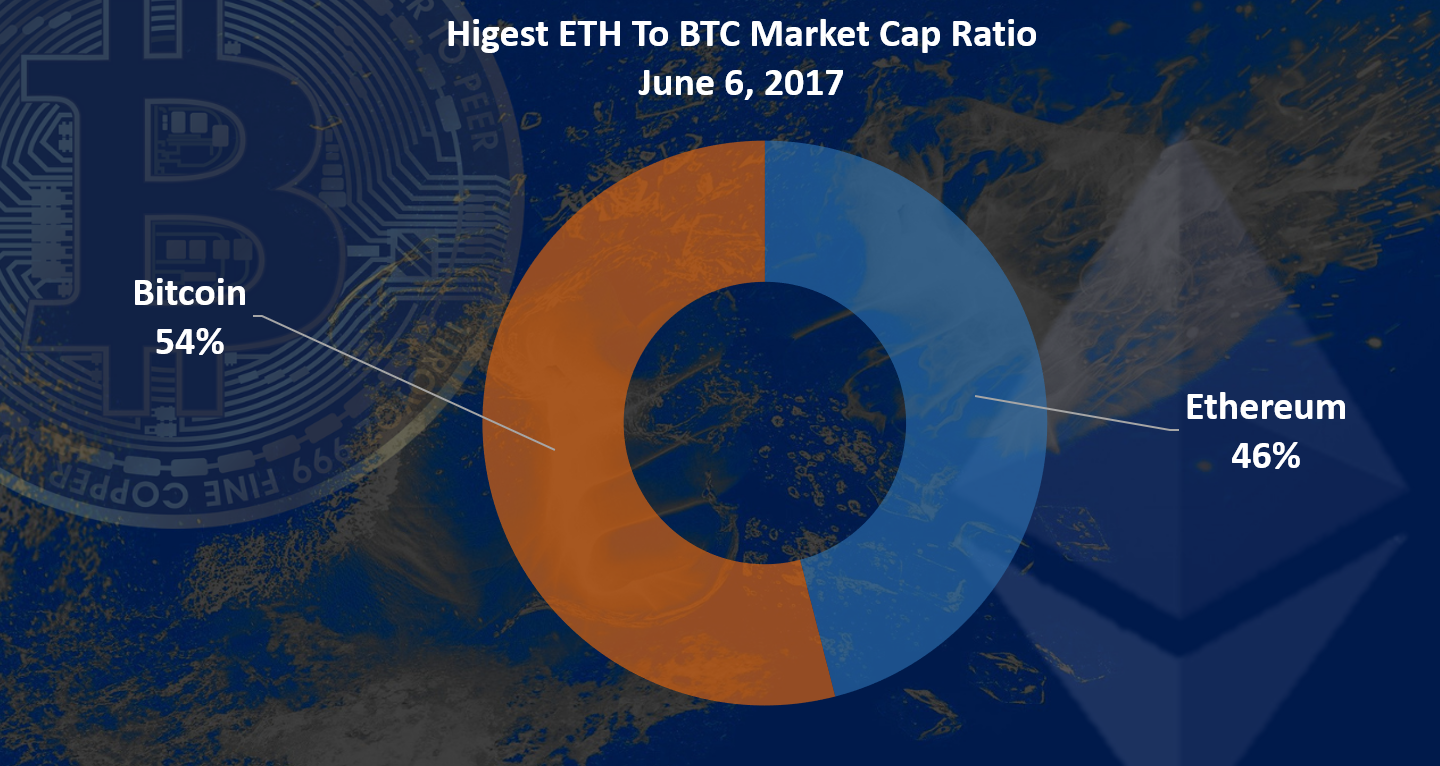 The closest that Ethereum came to Bitcoin.

This is pretty close. A 43 to 37! A 6 billion more ant Ethereum would have flipped Bitcoin. Looks like the flippening is not impossible 😊. A 54% to 46% ratio.

Finally from the metrics above things stands like this:

Two for BTC, two for ETH and one draw.

A note at the end that comparing these two blockchains just in terms of the numbers above is quite interesting and useful, but might be misleading as well.

These two blockchains have taken a different role now. Bitcoin as a scare’s asset a digital gold, while Ethereum as the leading smart contract platform enabling innovations, new dApps and use cases for crypto. Personally, I would like to see both of this two perform well.