As a decentralized ecosystem the Hive Decentralized Fund (DHF) plays a vital role for Hive. Being able to self fund from a DAO exclude the need for VCs therefor pushing the decentralization of the network even more.
The DHF has been around from 2019 but ever since the HF that created Hive its role has become much more important since there no central entity to do the heavy lifting and push the development.
The Hive Decentralized Fund (DHF) has around 14M HBD now and keeps growing. It holds a lot of HIVE as well but those are not available for use. Since the inception of the Hive blockchain the funds under management in the DHF has gowned from under 0.5M HBD to 14M HBD at this moment. It is regular funding devs as well with payouts on daily basis.

Let’s take a look at the data. 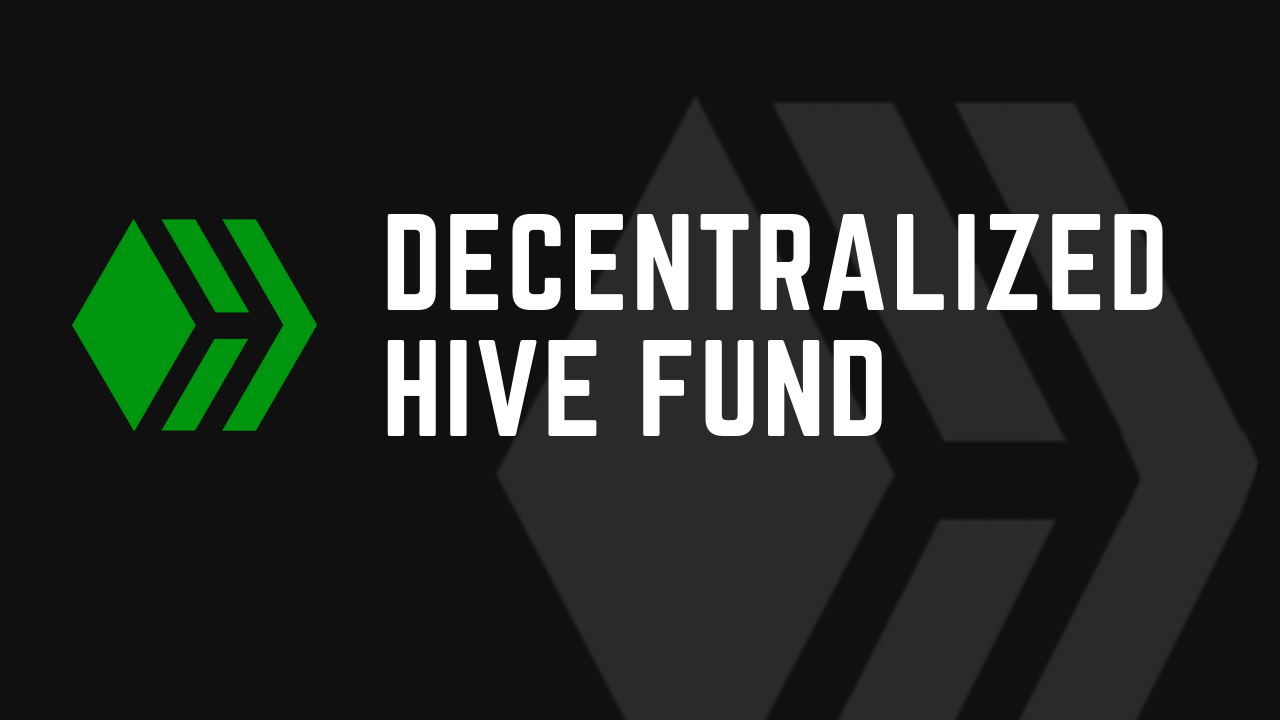 The account that holds the DHF funds is the @hive.fund. Only 1% of the HBD holdings in this account are available for daily payouts and funding. At the moment this budget is around 140k HBD per day. Projects can create proposals for funding and if they are voted out from the community, they will start receiving funds.

There is only one way funds can exit this account and that is for proposal who have been voted from the community to get the funds.
But when it comes to funding, or how funds are added to the DHF there is more than one way.

Funds added to the DHF:

The core source of funding for the DHF is the inflation, but in the recent history a few more significant sources of funds were added. The most significant would be the HIVE that was transferred from Steemit Inc to the DHF. At the time of the fork March 20, 2020, there was more than 80M HIVE put in the DHF. Later with another HF this HIVE was put in a slow conversion mode with 0.05% of it being converted to HBD. At this rate the full conversion will end in around 4 years. This to avoid price shocks.

Another significant source of funds are the transfers to the DHF that are made by the @hbdstabilizer. This account is receiving fundings for the purpose of stabilizing the HBD. It trades HBD or HIVE on the internal market to maintain the peg and then it sends the funds back to the DHF. The stabilizer send and receive funds, but overall it has been a net positive.

At the end there are the funds from donation like transfers and post beneficiary. Whenever someone makes a post and set the DHF as a beneficiary, the rewards are paid to the DHF adding more funds to it.

The period that we will be looking at is since the creation of the DHF in 2019 till March 2022.

As mentioned, 10% of the inflation goes to the DHF. Here is the chart. 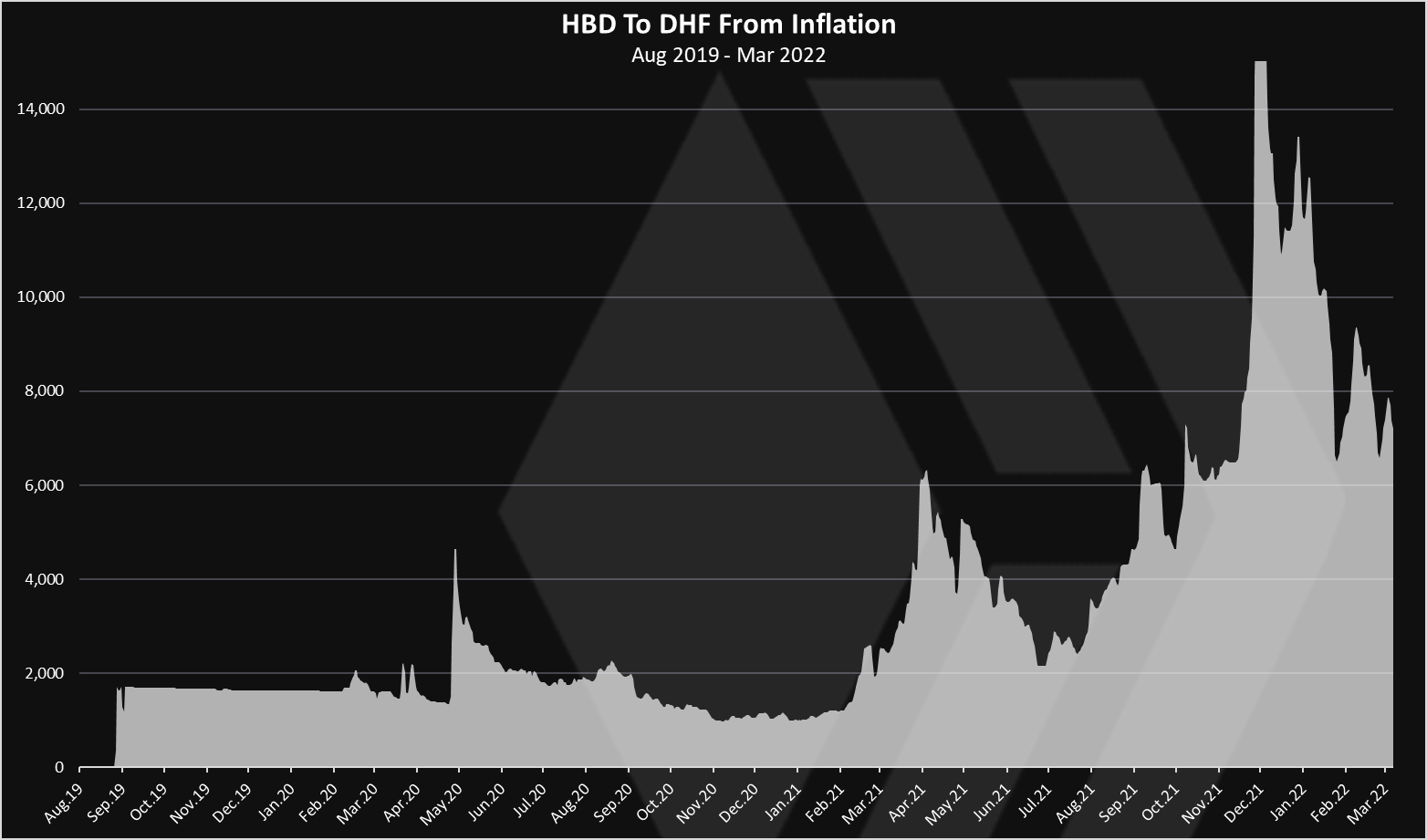 The amount of HBD added in this way is corelated with the HIVE price. 10% in HBD is not the same when HIVE is 2$ or when it is 10 cents. We can see the spikes in the chart, those are basically whenever the HIVE price went up. In 2020 there was a period when only 1k HBD per day was added from inflation. In the last days this is more then 10k HBD per day. In total a 3.2M HBD was added in this way.

Here is the chart for the HBD added in this way. 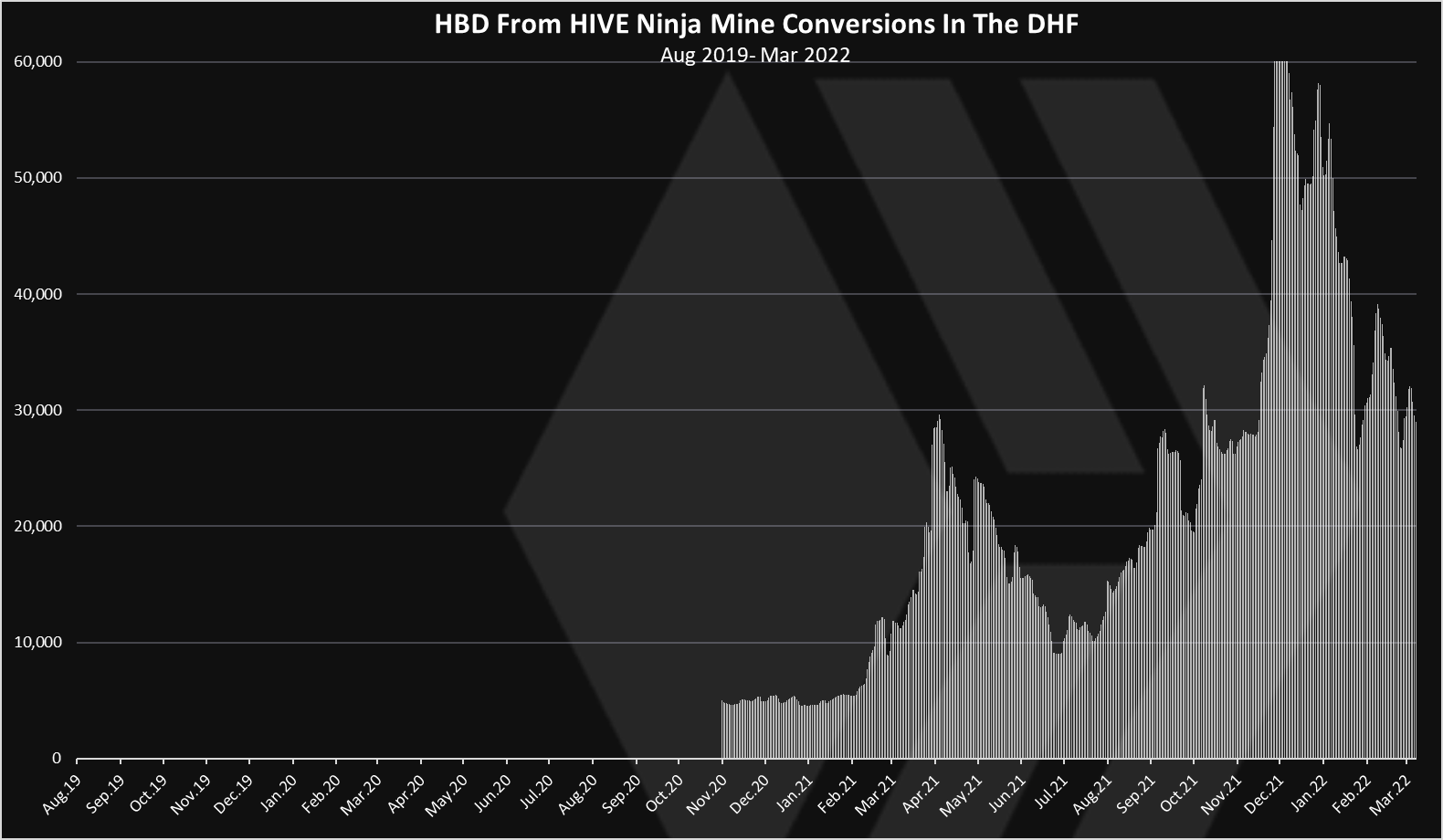 This is another significant source for the DHF. It started converting the HIVE in the DHF at the end of October 2020. This is when the HF happened that enabled this. These conversions are also heavily dependent on the HIVE price. At the beginning there was around 5k HBD added per day and now it is around 30k HBD per day.

A total of 10M HBD was added in this way.

We can notice that these funds are actually bigger than the inflation itself. A five time bigger on a daily level. Thing is they wont last forever and will end in about four years time. Also as time progress they will become smaller in terms of HIVE. At the moment there is 64M HIVE left to be converted from the 80M plus when started.

HBD Transfers To The DHF 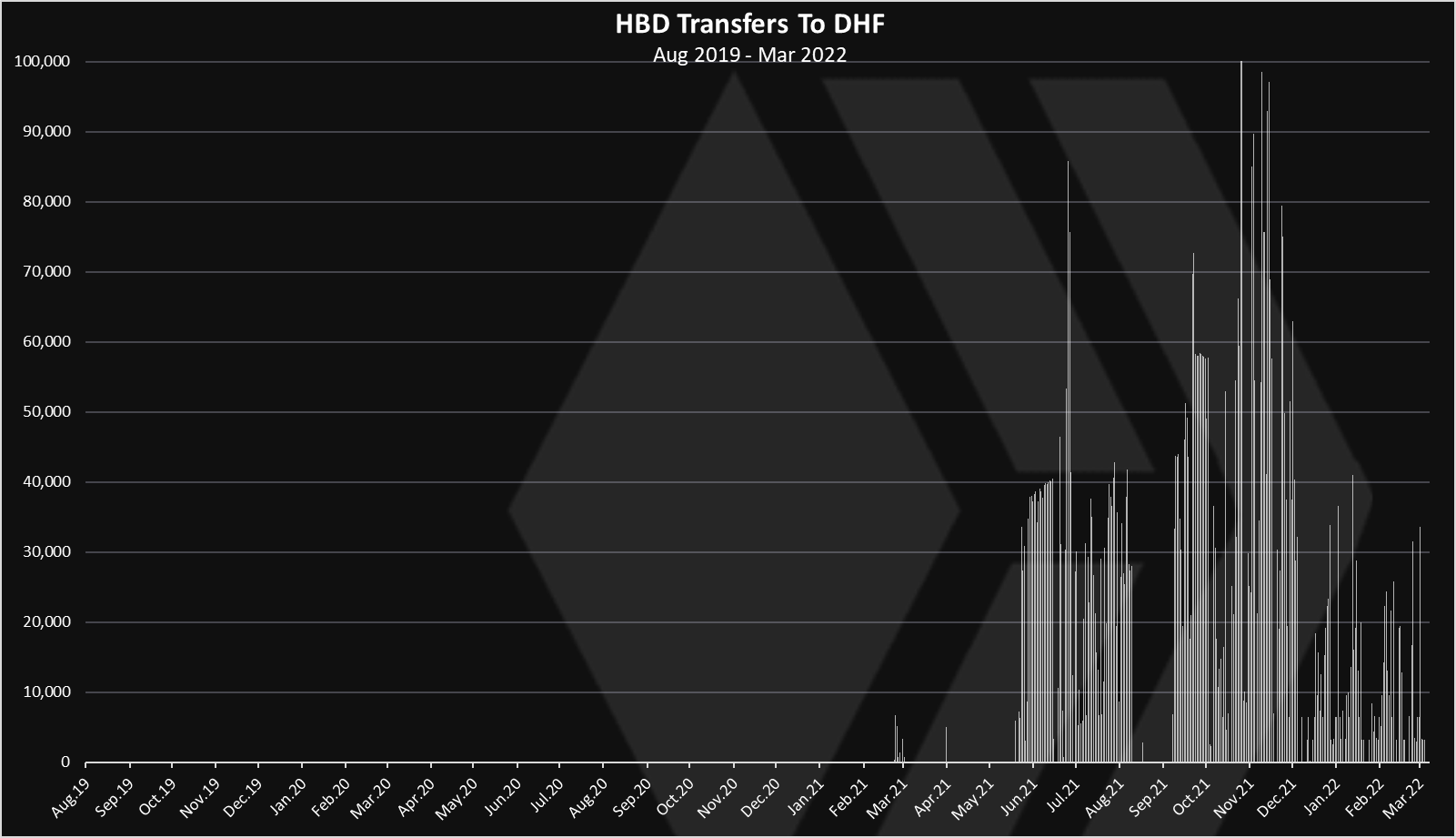 These are usually excess funds from the @hbdstabilizer. When the peg of HBD is close enough to the dollar if there are no needs from funds, the stabilizer sends the funds back. It doesn’t hold or accumulate them.

We can see some spike here and there, again this is dependent on the HBD price. In the last period we are seeing 100k HBD per day sent back on some occasions. Although the stabilizer is doing most of these transfers there are some small amount from other accounts, as everyone can sent HBD to the DHF.

HIVE Transfers To The DHF 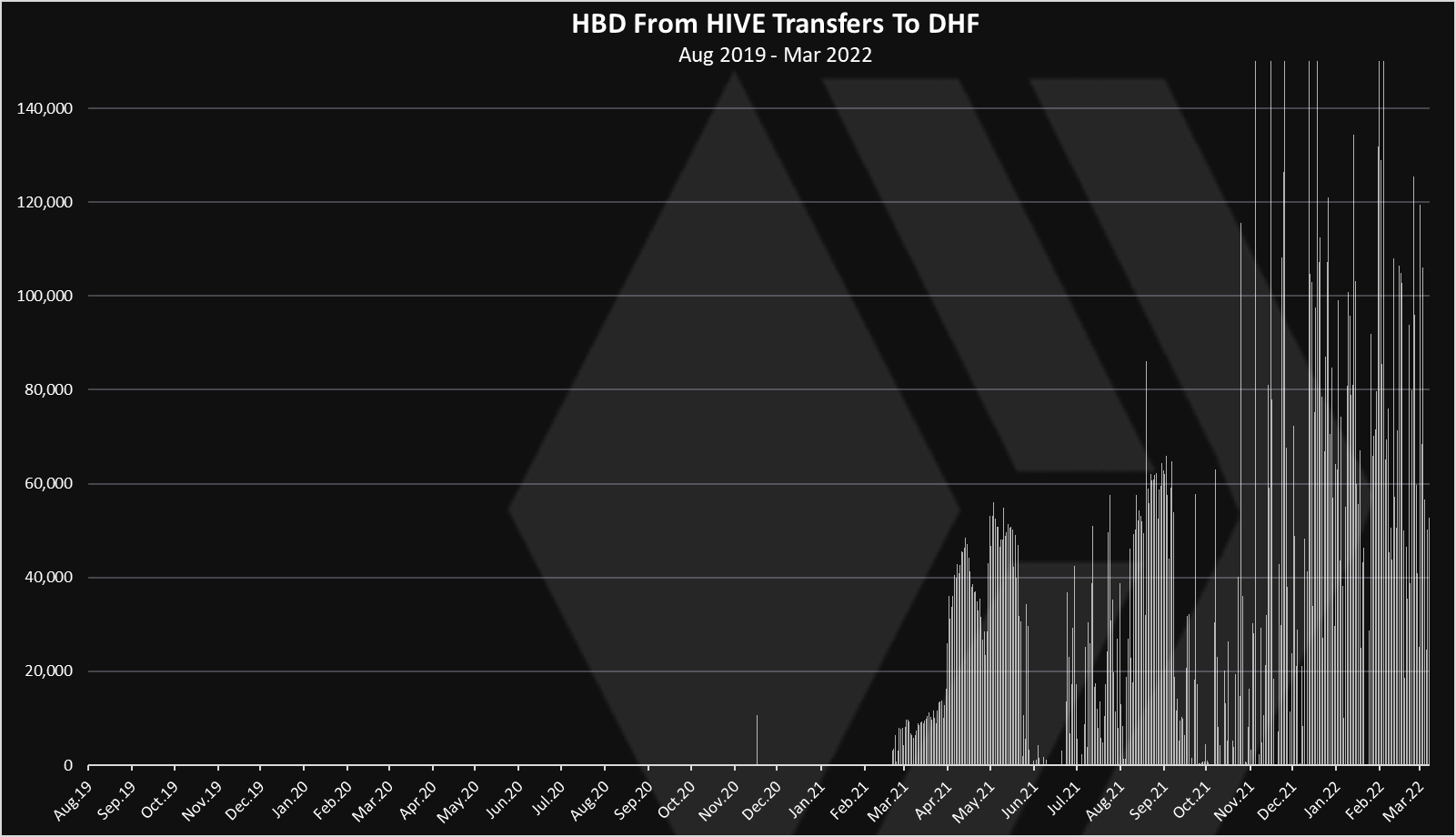 These transfers are mostly made by the @hbdstabilizer. When the price of HBD is higher than a dollar the stabilizer sells HBD, receive HIVE and sent that HIVE to the DHF where it is being instantly converted to HBD at the feed price.

From the transfers above we can conclude when was the price of HBD above one dollar 😊.

If we combine all the above we get this. 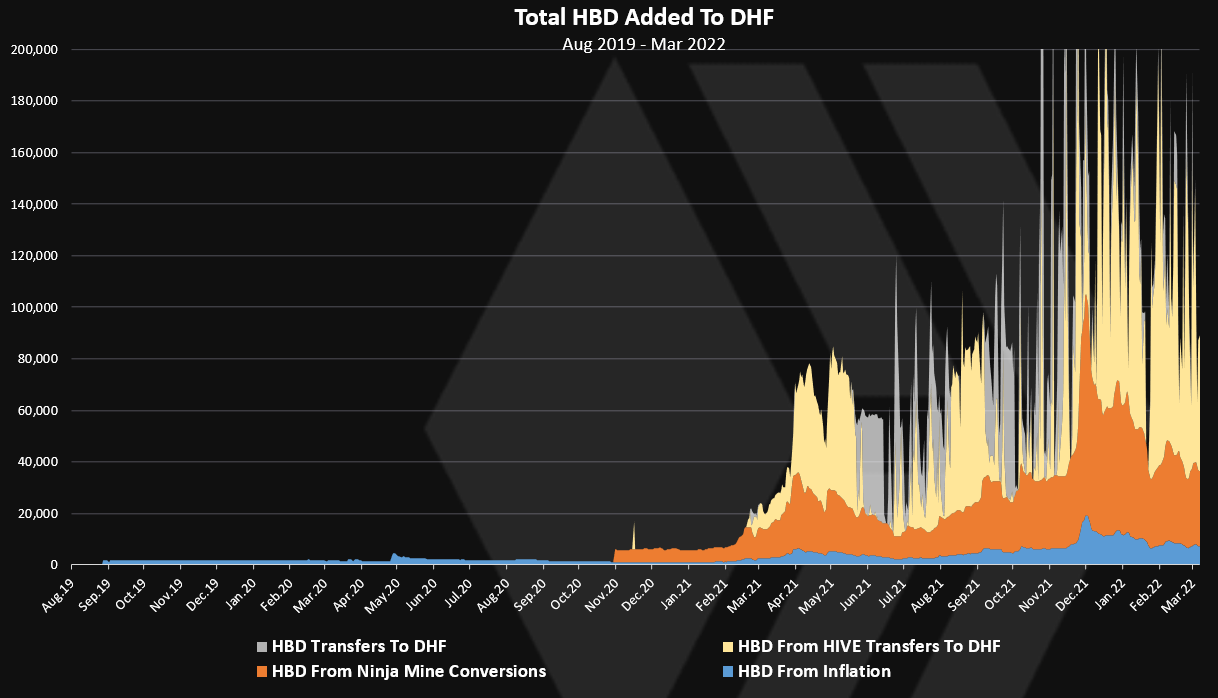 Note the inflation in blue. It has been a small share for HBD added to the DHF. The conversions from the HIVE in the DHF (orange) has been a significant income for the DHF. As for the transfers go, we can see a lot of spikes created from HBD and HIVE transfers, but a lot of these funds are send back to the stabilizer, so the are almost nulled. This said the stabilizer has been net positive and has added more then one million HBD to the DHF in the period.

HBD Balance In The DHF

Here is the chart of the HBD balance in the DHF over time. 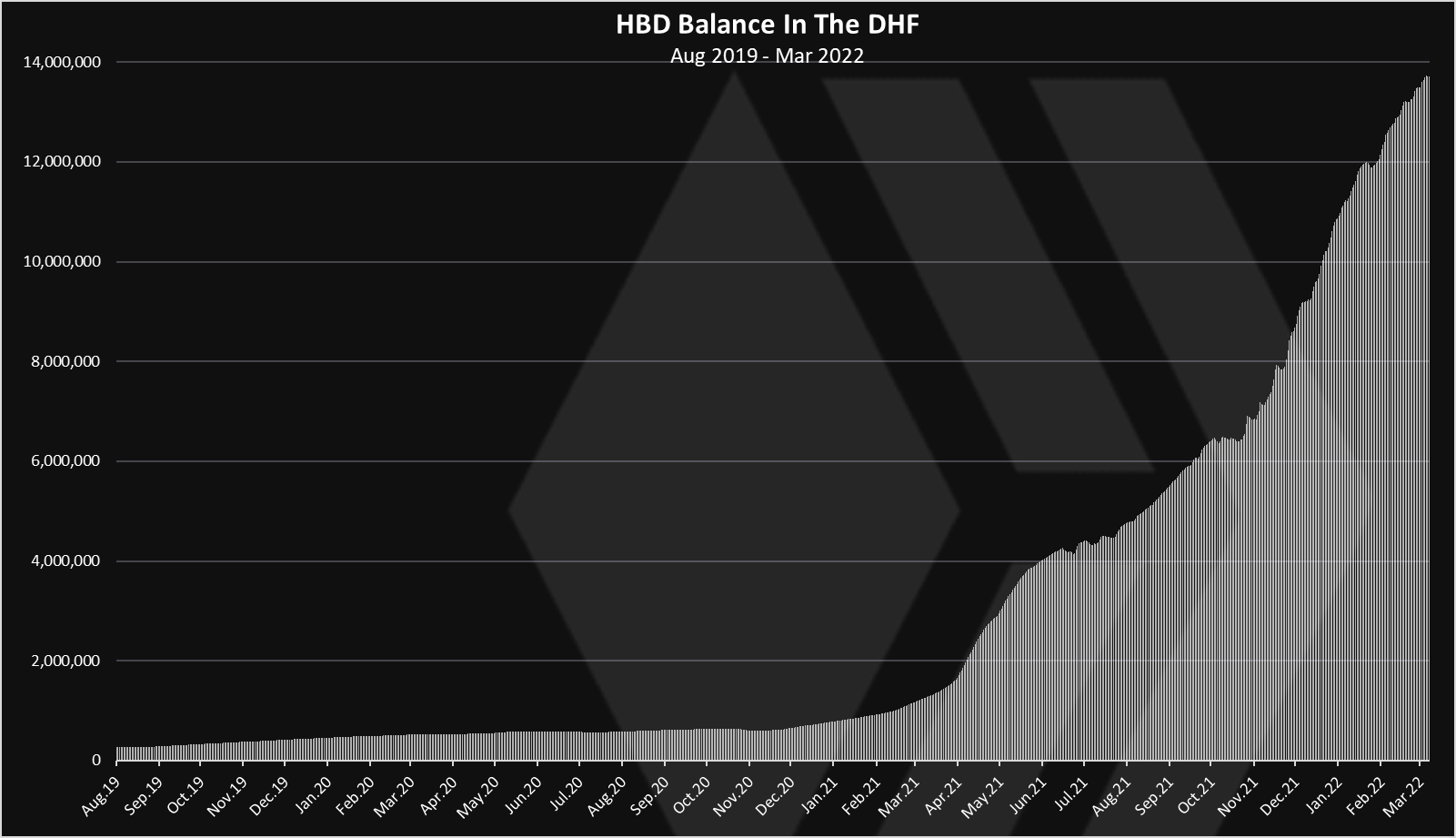 As we can notice when Hive was created the DHF had only around 500k HBD in the account. This amount slowly increased and from March 2021 it started growing rapidly. This is mostly due to the increase of the HIVE price. Since then, it has been growing nicely and we are seeing even bigger growth in the last period.

The DHF balance has now reached 14M HBD and will keep growing.

A larger balance in the DHF is an assurance for the projects that are currently using it that the funding will continue without issues, and it will attract more developers. Since the creation of the DHF a total of 43 different accounts received some form of funding.

One of the key gainer from large DHF fund has been HDB itself. With more funds in the DHF, the @hbdstabilizer has more power to maintain the HBD peg on a daily level. As the funds continue to grow this will cement HBD further, that will improve its overall usability.

Payouts From The DHF

As mentioned, this is the only way HBD leaves the DHF. Here is the chart. 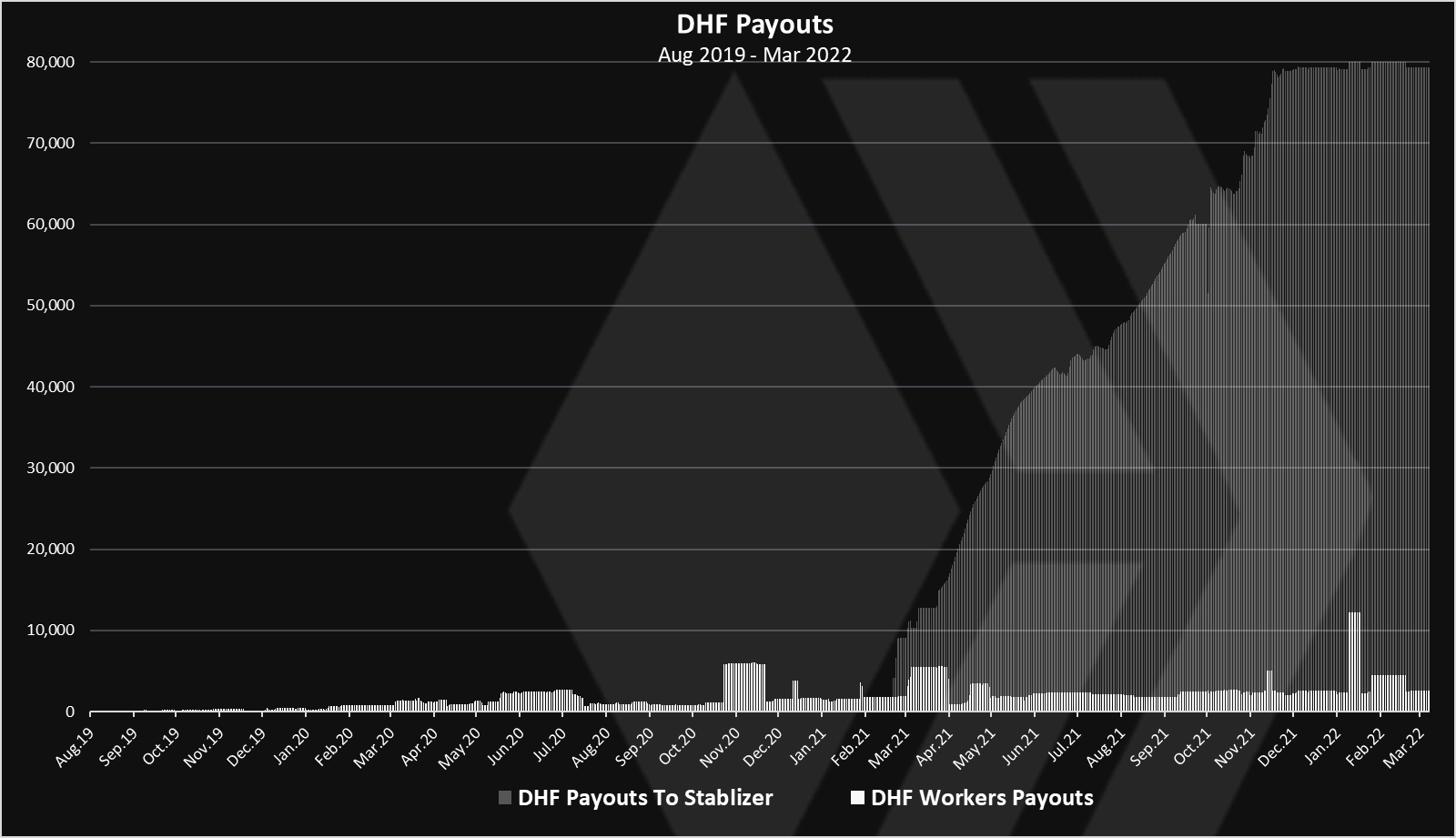 I have represented the payouts to the @hbdstabilizer in light color since those are technically returned back and they re not a standard used funds as the others. We can see that the stabilizer payouts are dominant.

If we exclude stabilizer payouts and take a look at the realized payouts to DHF workers and zoom in we get this. 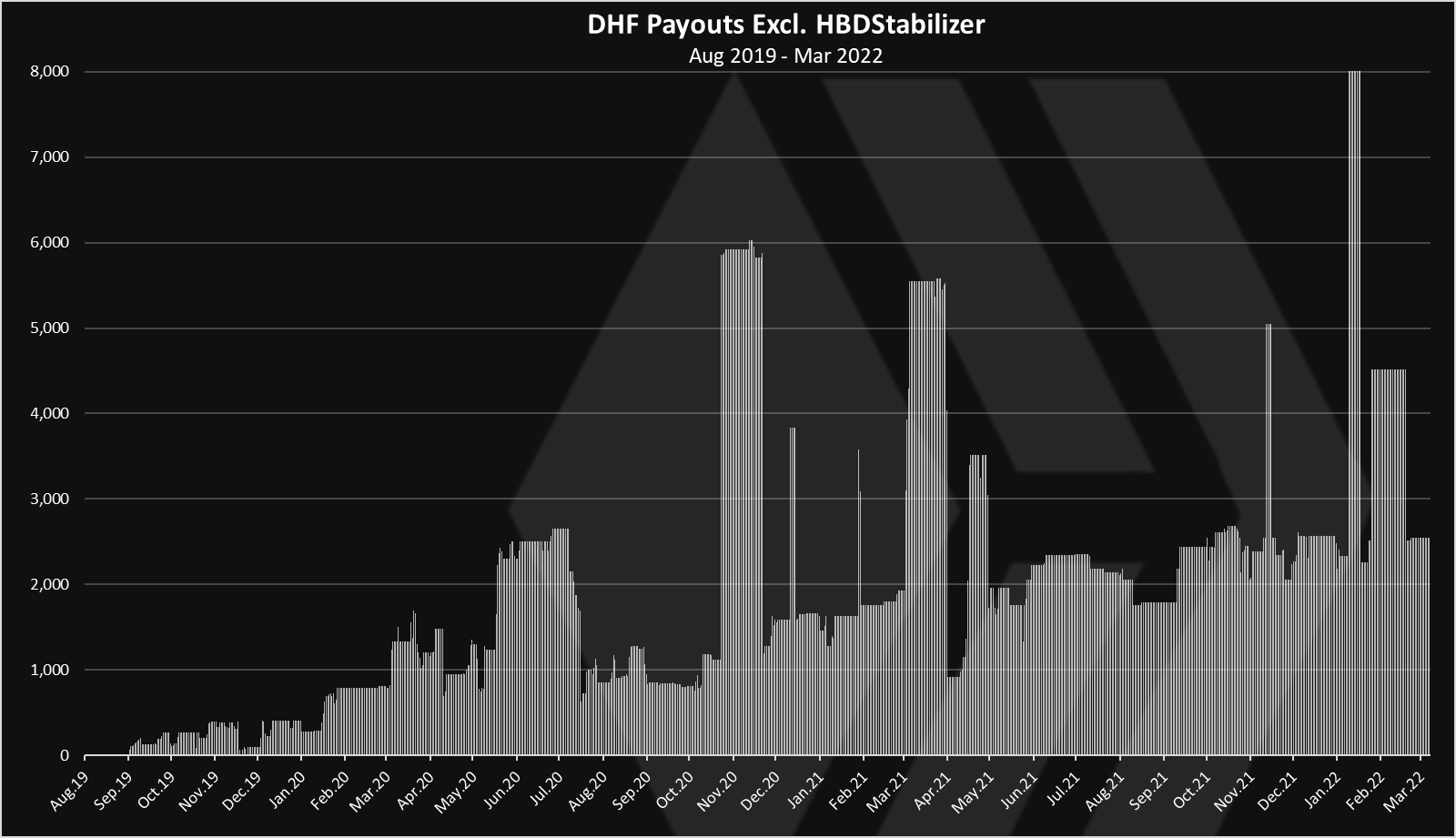 We can see that the payouts have gowned at first, from under 1k HBD daily to around 2.5k daily in the last period. There are some short spikes in between when more then 5k daily is paid but those are short ones.

A total of 1.8M HBD has been paid to HBD workers since the DHF inception.

Here are the accounts that received most of the funding. 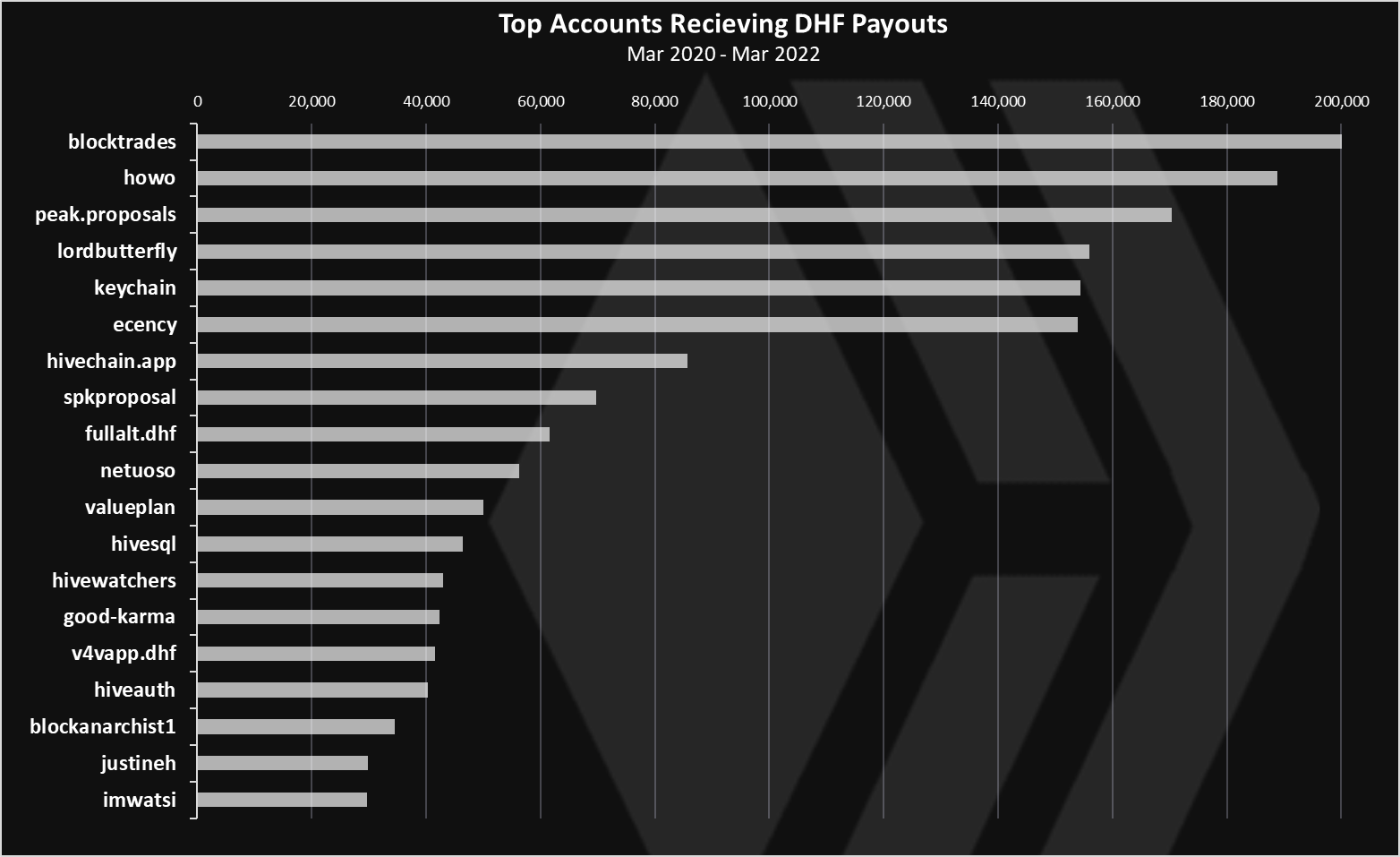 Note that the @hbdstabilizer is excluded from the list

@blocktrades is on the top here with 200k HBD received but a big part of it is like a middle man for payouts to accounts that were by mistake excluded from the initial HIVE airdrop. Another part is for the image hosting server.
@howo comes second with 180k HBD, followed by @peakd. All the top 20 accounts received more then 30k HBD in funding.

We can see a massive growth in the HBD funds in the DHF in the last months mostly thanks to the HIVE price. The payouts to devs are going on daily basis and have been on a similar level in the last months. The stabilizer has taken a special role to stabilize the HBD and it has been doing a nice job, since HBD has improved a lot. The daily regular payouts of 2k to 5k are way below the available budget of 140k daily. On a yearly basis we had 600k in 2020 and 900k in 2021. The top accounts that received funds have more then 30k HBD paid.

The HBD funds in the DHF will continue to grow having in mind the ninja mined HIVE conversions. Depending on the price of HIVE they can reach up to 100M in a few years.