Despite The Bear Market The Number Of Transactions On Hive Remains Consistent | Data On Posts, Votes, Transfers and Custom JSONs | Nov 2022

Here we will be looking in the numbers for transaction, and not just in terms of posting but other activities as well, like votes and custom JSONs that are mainly driven by games. 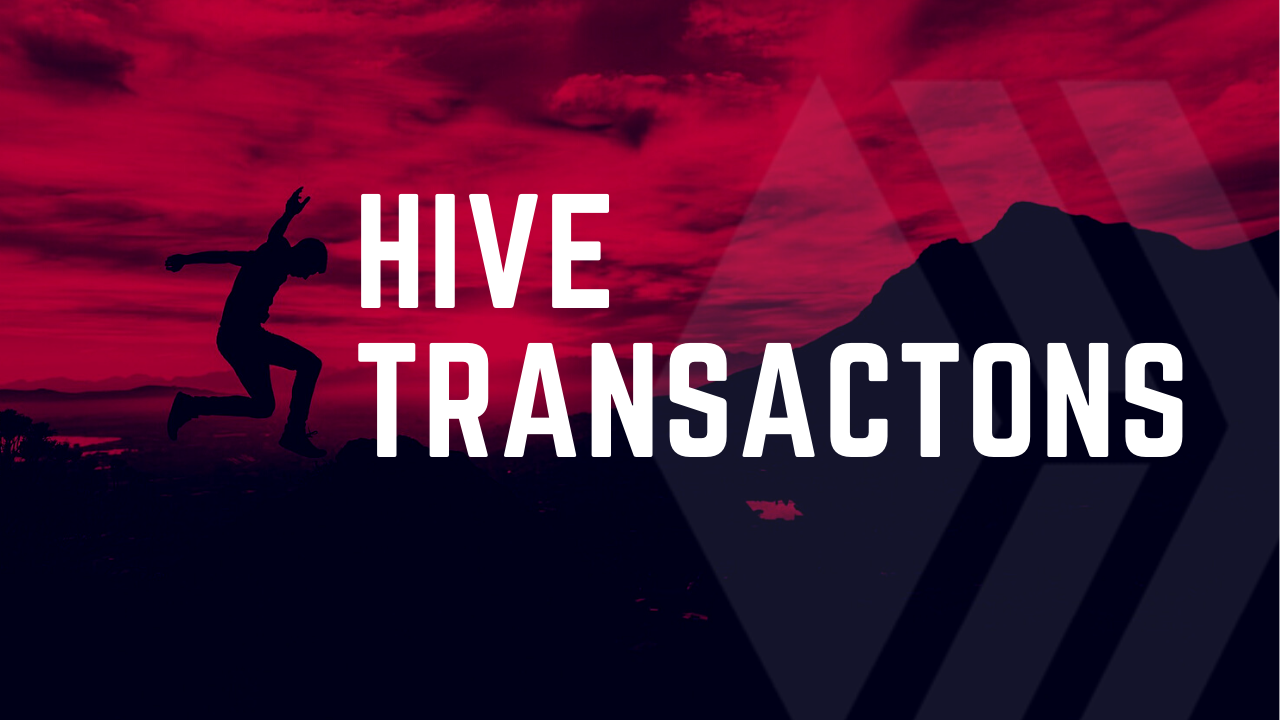 Usually when talked about activity on the Hive blockchain a lot of the users have in mind posting and commenting. Here we will be looking in the top 4 activities on the blockchain:

The above consist the majority of all the transaction on the blockchain. The claim rewards operation also has a high number of transactions, but we will leave out that one.

The period that we will be looking at here is 2022.

Number of Posts and Comments

Although gaming is growing on the blockchain, blogging still remains the core activity and one of the keyways inflation is distributed. Users can blog about gaming as well 😊.

Here is the chart for the number of posts and comments on the Hive blockchain. 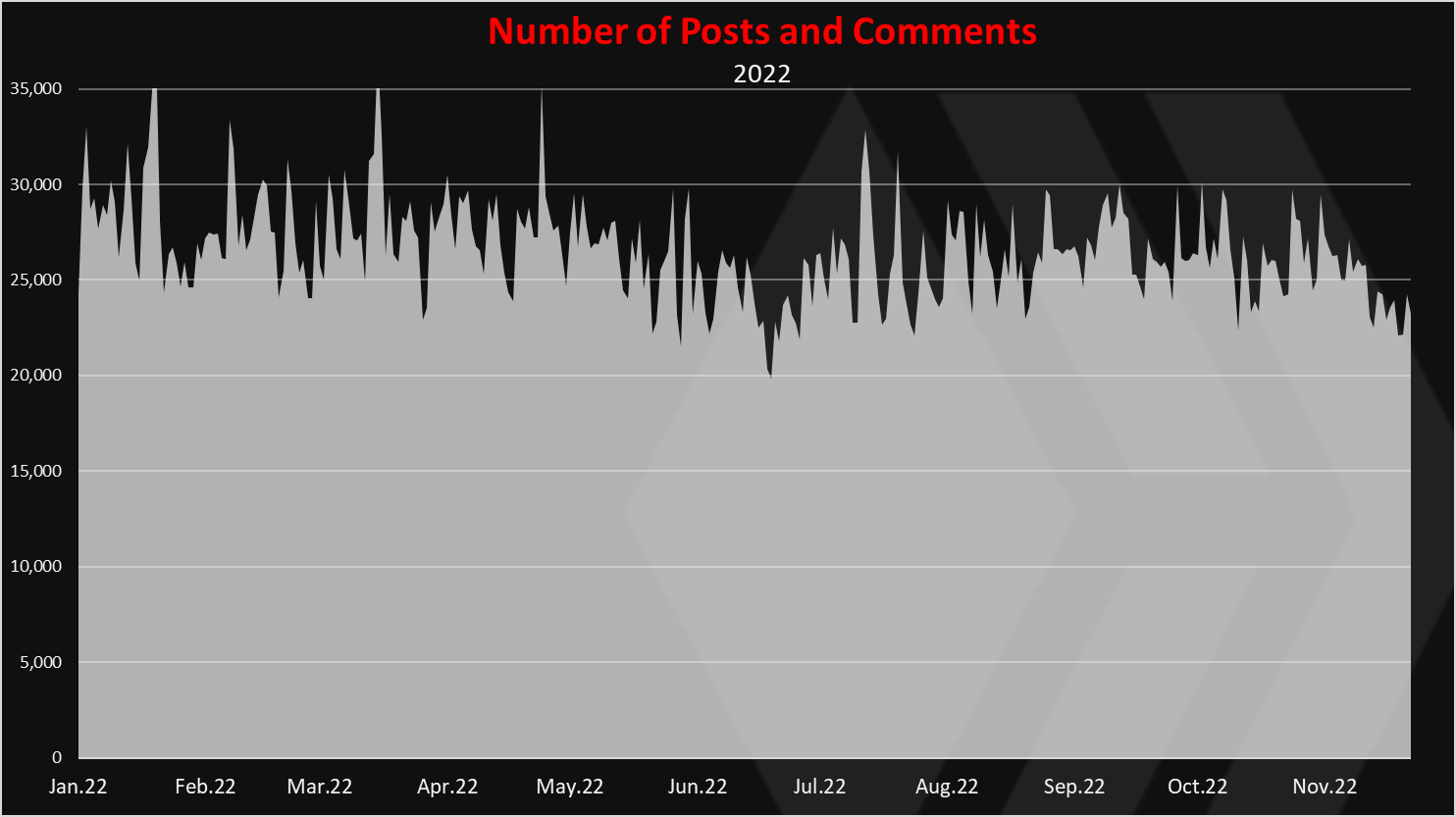 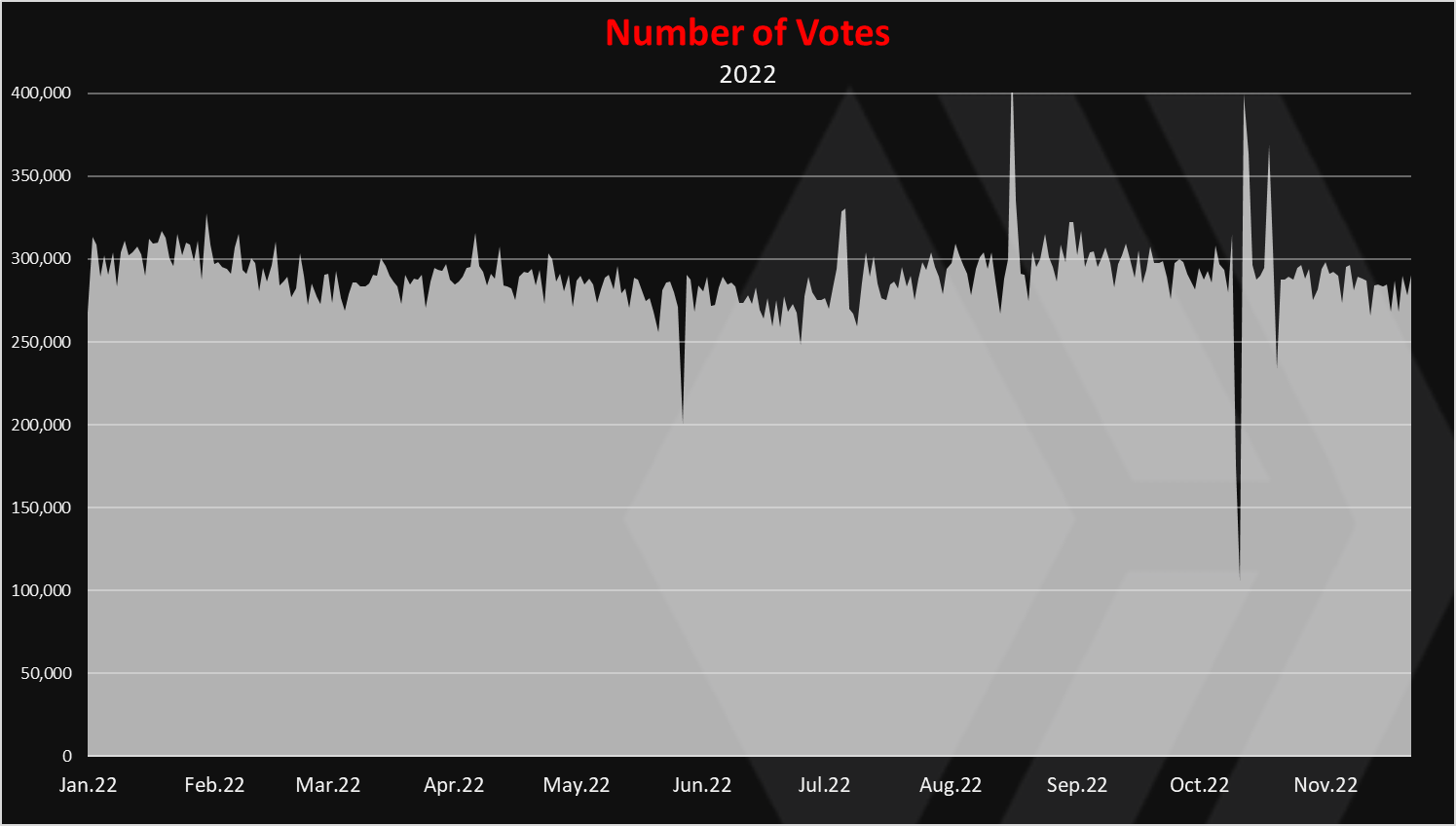 Votes are one of the core operations on the Hive blockchain. That is how the rewards are distributed. The Proof Of Brain mechanism (PoB).

The number of votes has been quite steady in the period, compared to the price volatility.
Throughout the year the numbers are between 250k to 300k votes per day. On few occasions there was more then 300k per day.
We can notice the sharp drop and recover in October when the Hive.Vote service was down for a bit during the Hardfork. 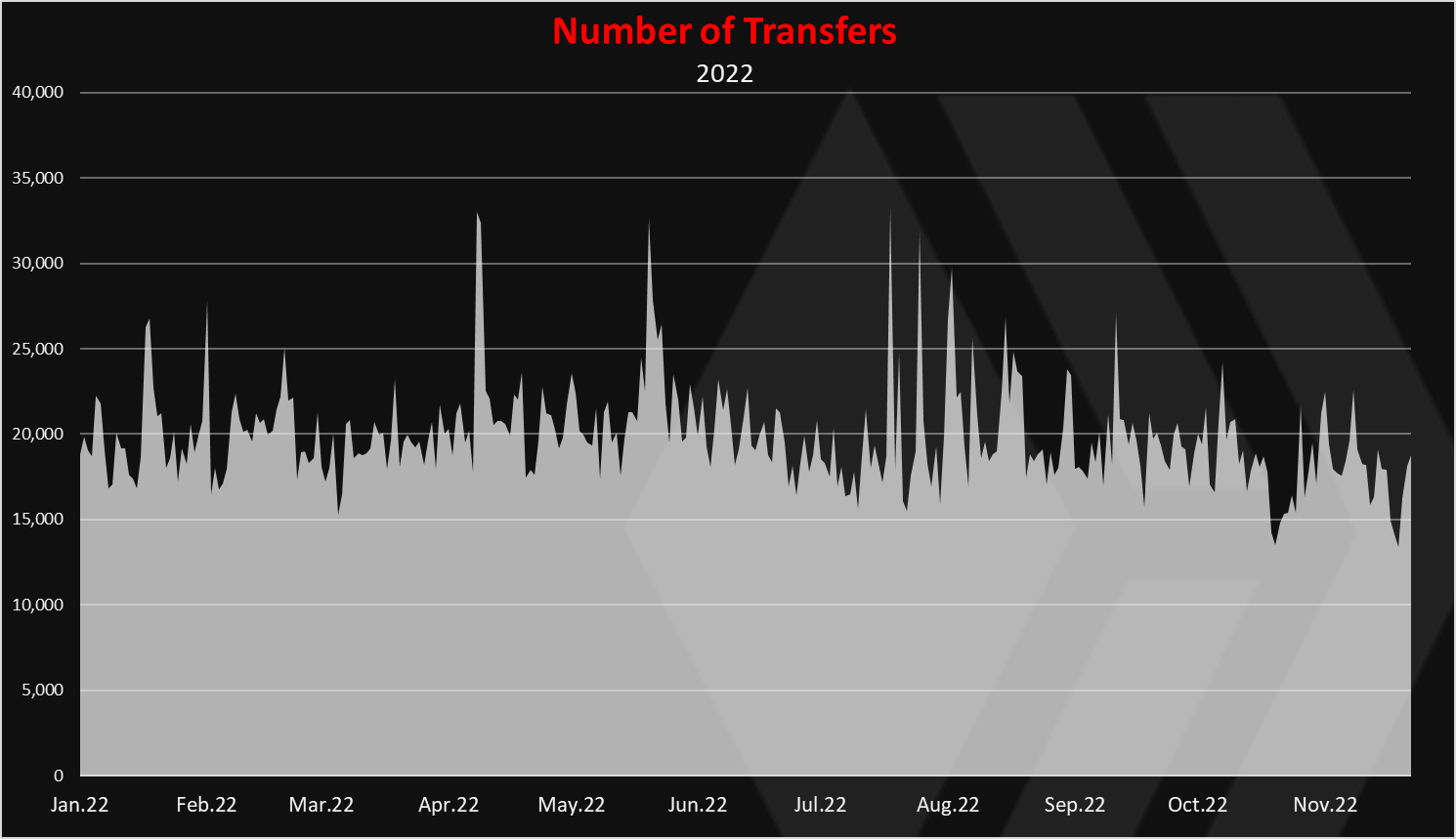 Some ups and downs here but overall a steady trend. The year started with around 20k operation per day and in the last days is between 15k to 20k.

The chart for custom JSONs operations. 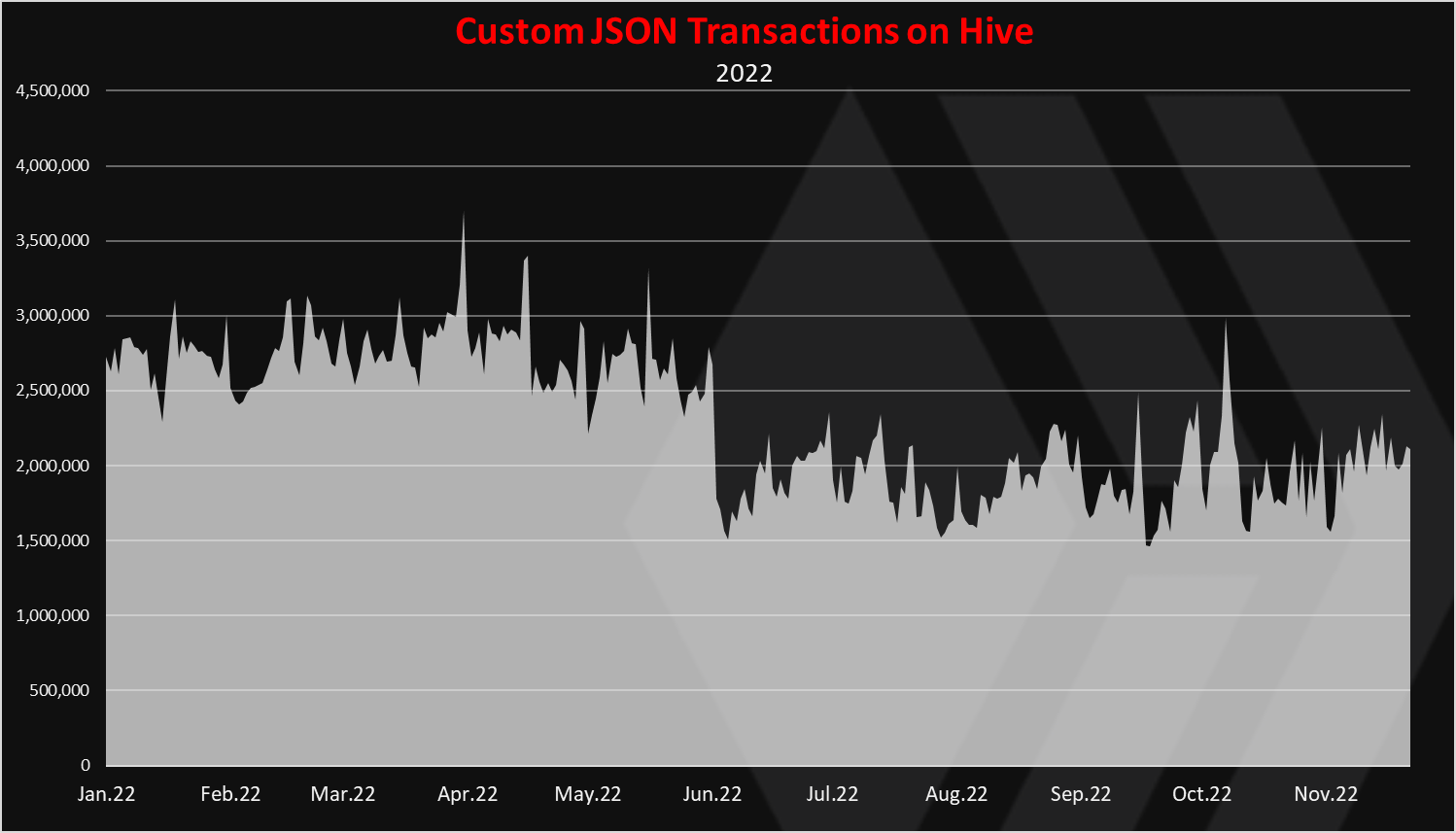 This is the number one type of operation on the blockchain at the moment with millions made on a daily basis.

The custom json transactions are mainly used from the games on Hive, with Splinterlands on the top. Hive Engine operation are also contributing a lot. Custom jsons are just a text files, but unlike the post and comments, they are like sidenotes, don’t appear as post and are not eligible for votes.

We can see that the year started with 2.5 million to 3 million daily operations and now we are at 2 million daily custom json operations.
There was sharp drop in the number of operations in June, that is because of the change in the Splinterlands reward system and some bots stopped playing. Since then, the transactions started growing again and we are now again at 2M per day.

When we combine all the charts above, we get this. 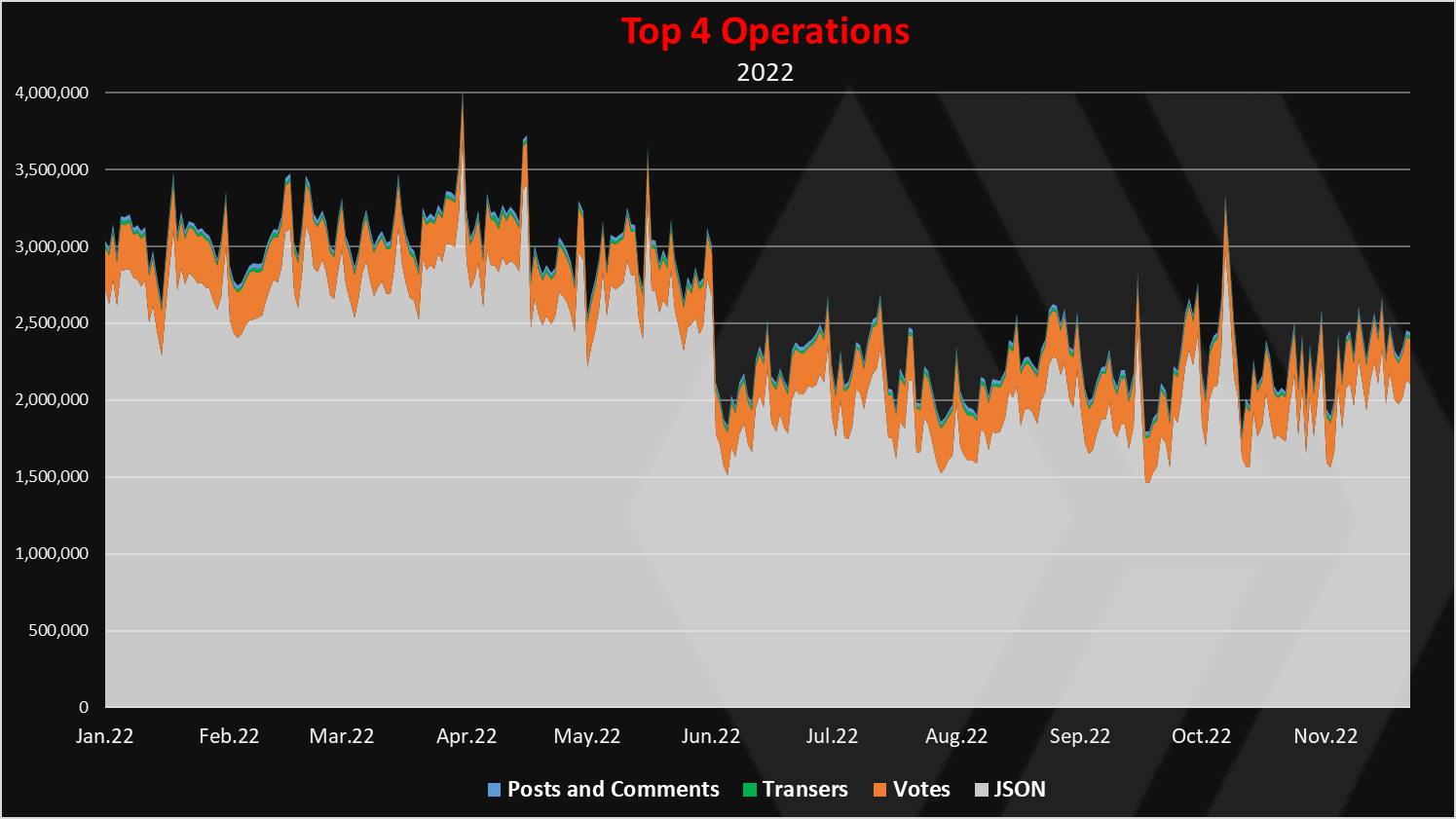 Although the “weight” of these operations is not the same, so its not totally comparable. Posts have the largest weight, as they require a lot of texts and effort, unlike votes or jsons, that are usually a one click operation.

Number Of Transactions Per Month

The monthly chart presents a better overview of the transactions. Here it is. 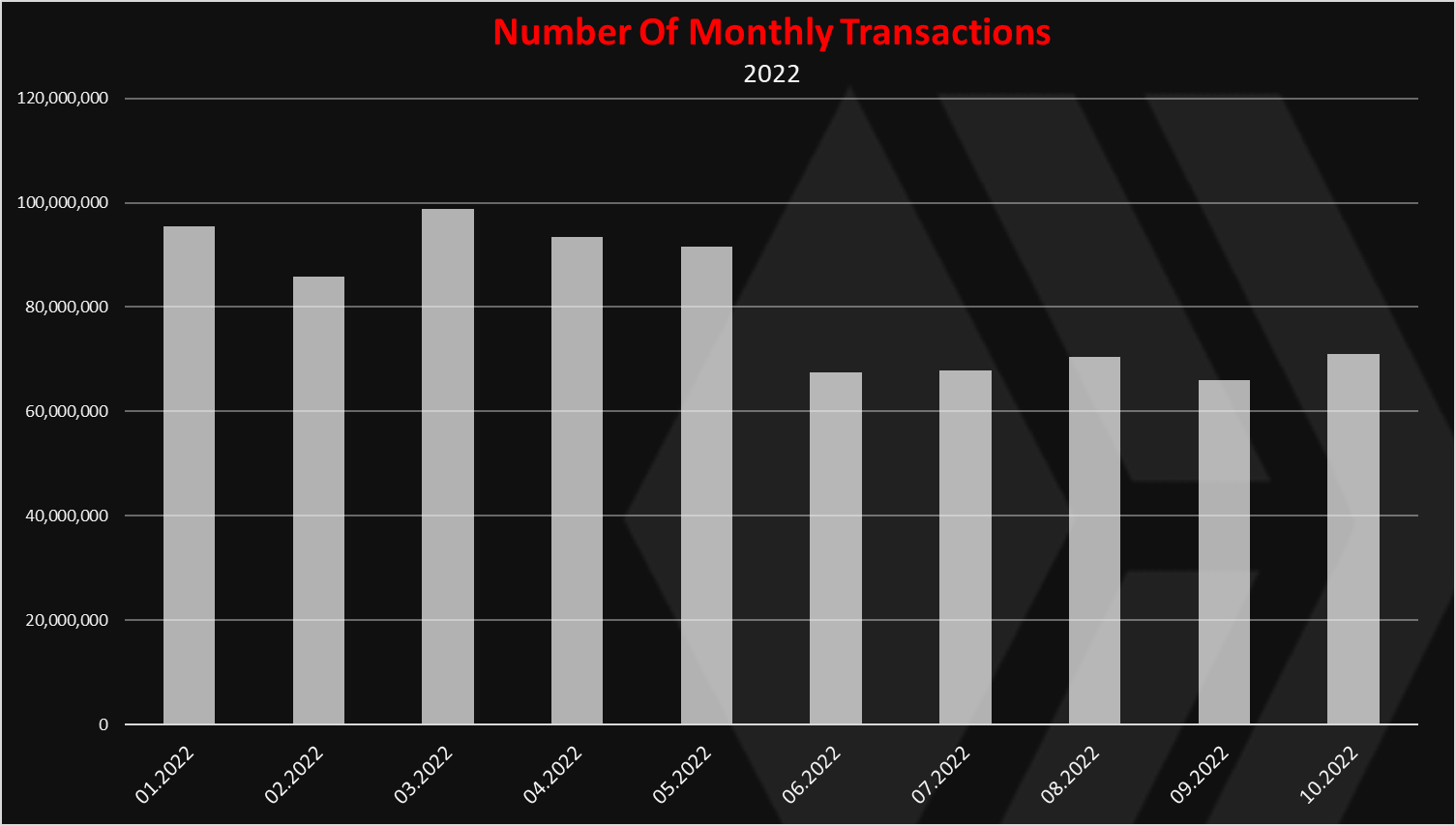 Note that not all the Hive transactions are included above.

In the first half of the year the number of monthly transactions was between 80M to 100M and then we can see the drop in June. This again because of the change in the Splinterlands reward system. Since then the numbers of monthly operations has been steady around the 70M mark.

The chart for November 2022 top transactions looks like this: 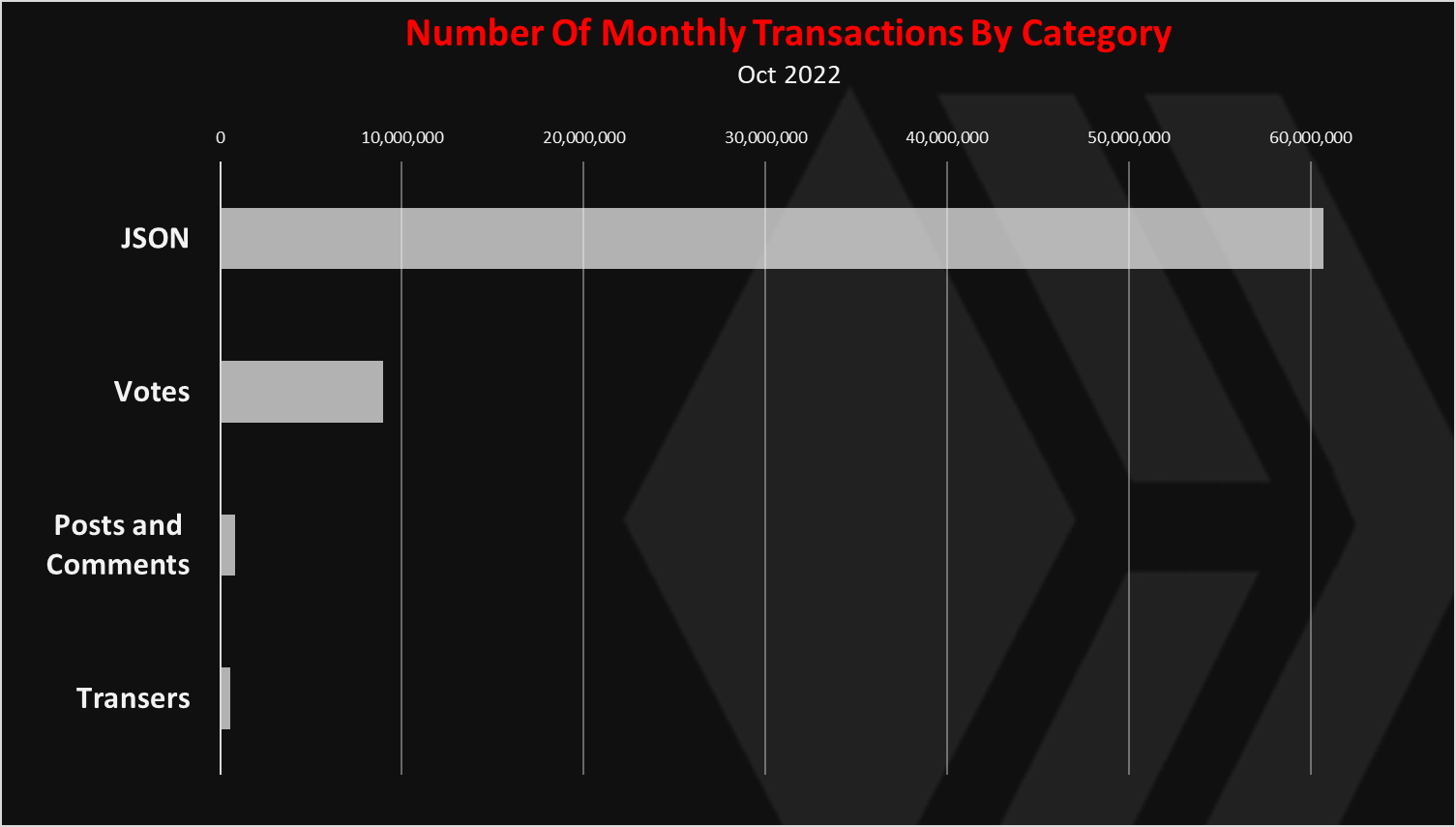 Here once again we can see the dominance of the custom json transactions.

A 71M transactions in November out of which 60M are custom json transactions. Next are the votes with 9M, then posts and transfers with under 1M.

Overall we can conclude that the activity on the chain remains very healthy despite the drop in the price. At the beginning of the year the HIVE price was above $1 and now we are around the $0.35 mark. Posts are comments have remained almost consistent with a very tiny drop. Votes have not seen any dropout in the numbers, and transfers are also almost the same. The biggest drop that we have seen is in the number of custom json operation and that is because of a change in the game design.

I think Hive is so stable now. I try and raise some funds to buy more !

Hivers are absolutely resilient! And we remain strong in our convictions that HIVE is indeed the future :)

Its a proven fact :)

The bear market is when we should be making more transactions on hive anyways. This is the time we build and grow our stake by posting and commenting, while networking and building a base for the long run. All made possible by feeless transactions.

Everyone says bear market is for builders, but few remain true to this staitment in actions. Hivers seems to be on right side.

The problem with that statement is, most people say that without actually understanding what they need to do when the time comes. The planning part becomes too complicated for most people. The advantage with hive is that, all the planning and guesswork is taken out of the equation for the commoners with lesser know-how of the market and technical details. All we gotta do is keep our heads down, and blog on!

It's the first bear market in the history of the chain where people are still running their daily activities like nothing happened, I think it's all due to the utility and secondary value of hive.. good stats

Its a first under the rebranded name, otherwise not quite the first. The creation of the chain happened at the end of the previous bear when the morale of everyone was quite down.

To be honest I was a bit worried about hive but being here on a daily basis I see nothing change. Yea Hive price drop few cents but we still get rewarded on all our activities here which is great. Love to see this report thank you

Usually you have the opportunity to stand out more in the bear market.

Usually you have the opportunity to stand out more in the bear market.

That is true interesting way to think about it.
Because everyone is scared they lose their savings or value

Hive proves that we are a strong blockchain.

The power of Hive is the community. This is real life usage and shows the strength of activity. Once I figured Hive out and realized that it is all the apps and communities that keep usage steady. I imagine a 10X of the community over the next few years and if it even 2X the activity by the next bull market I can see $10+ Hive.
!PIZZA | !PGM | !CTP

A well detailed report from you @dalz. Monthly, quarterly and yearly report is what helps a business Man to know if his business is healthy or not. From this report hive is doing very well and the business is very healthy. I now know that i and other hivers are appreciated in our little contribution. I appreciate your your work and I will say, may God give you and everyone here more wisdom.

i think this shows that we have a strong solid community!

It's really amazing. People with ability can get stable and sustainable income here

To be honest , this motivates me to buy and stake more HP to get more RC .

The cost of each transaction is bound to increase with new games coming up on Hive .

Each of these new games will publish numerous Custom JSONs and hence requiring more RC from other users for exact same JSON broadcast we used to do before .

Good news for Hive , I can forsee that by the end of December of next year , RC cost for each transaction will be atleast 1.5x ( Educated guess ) :) which will put more buy pressure on Hive .