This is a report for the Hive supply and inflation for July 2022.
The main event for Hive in July was the HBD pump that caused a lot of HIVE to be converted to HBD, does making HIVE deflationary in July.

Let’s take a look at the data! 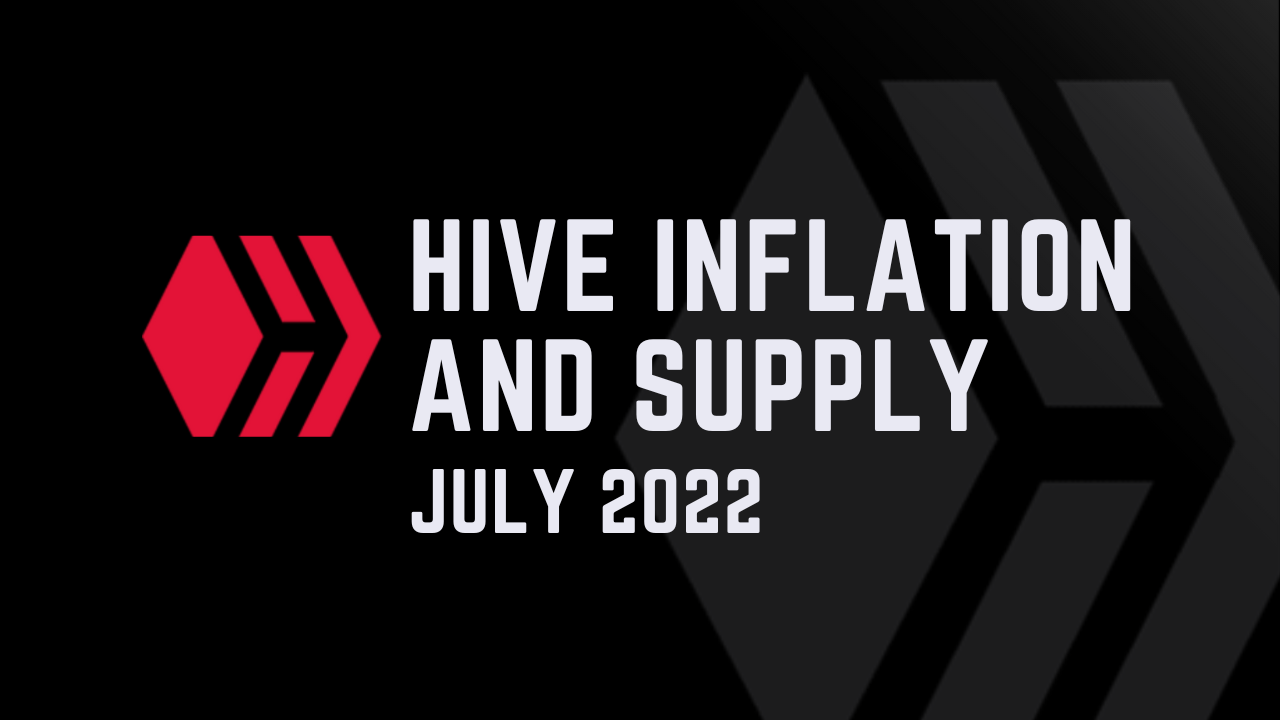 The thing is Hive has a double currency system HIVE and HBD and there are conversions between them that add or remove HIVE from circulation on top of the regular inflation. Furthermore, there is HIVE in the DHF that is slowly being converted to HBD and also HIVE sent to the DHF is also converted to HBD. Because of this additional mechanics the HIVE inflation and supply can be drastically different in real time then the regular one.

To be able to follow the HIVE supply we need to take a look at all the different ways HIVE is created, author, curation, witness rewards, conversions etc, then net that out with the HIVE burned from conversions, accounts fees, null transfers etc. To get the virtual supply we need to do the same for the HBD supply as well. 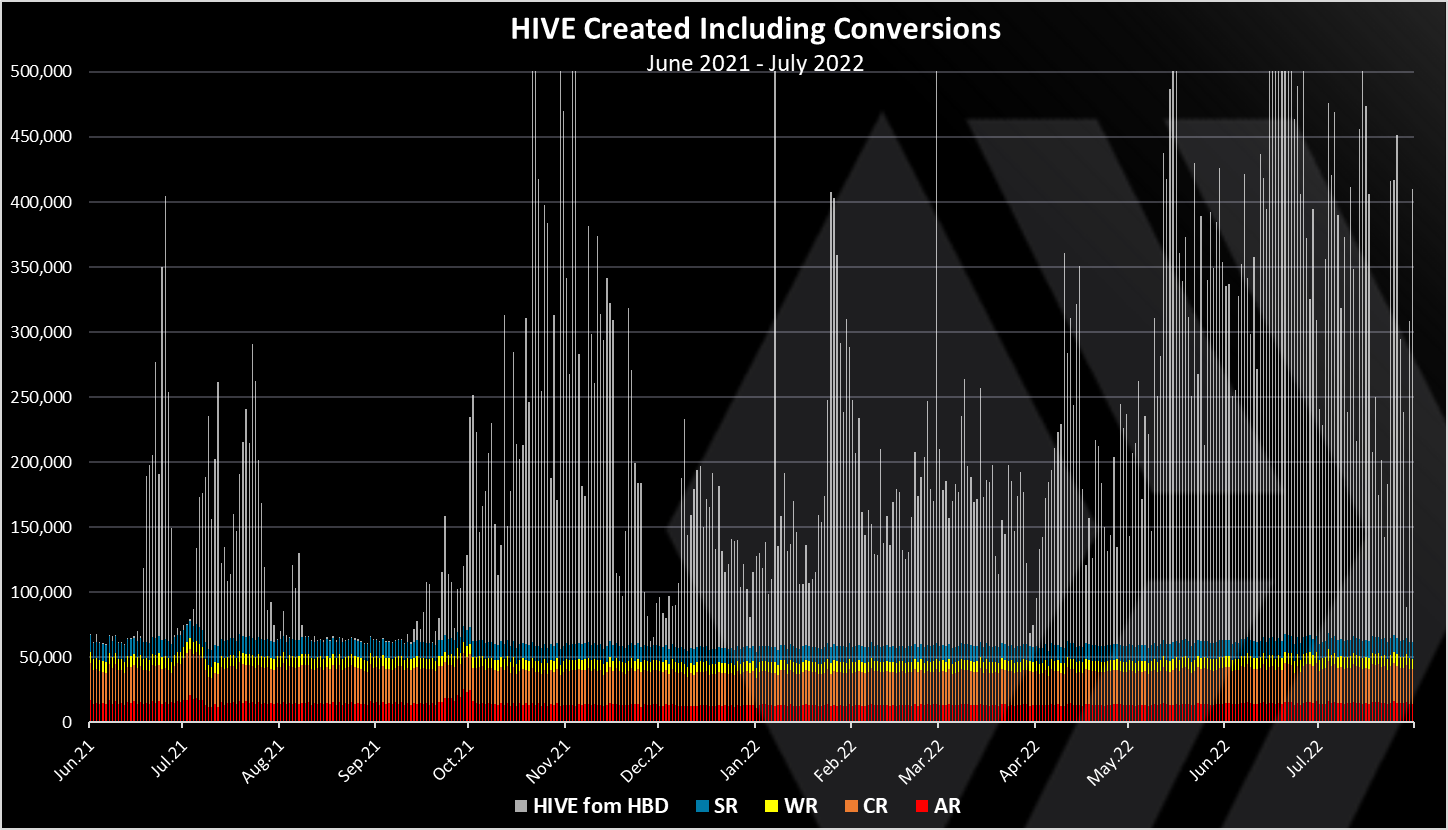 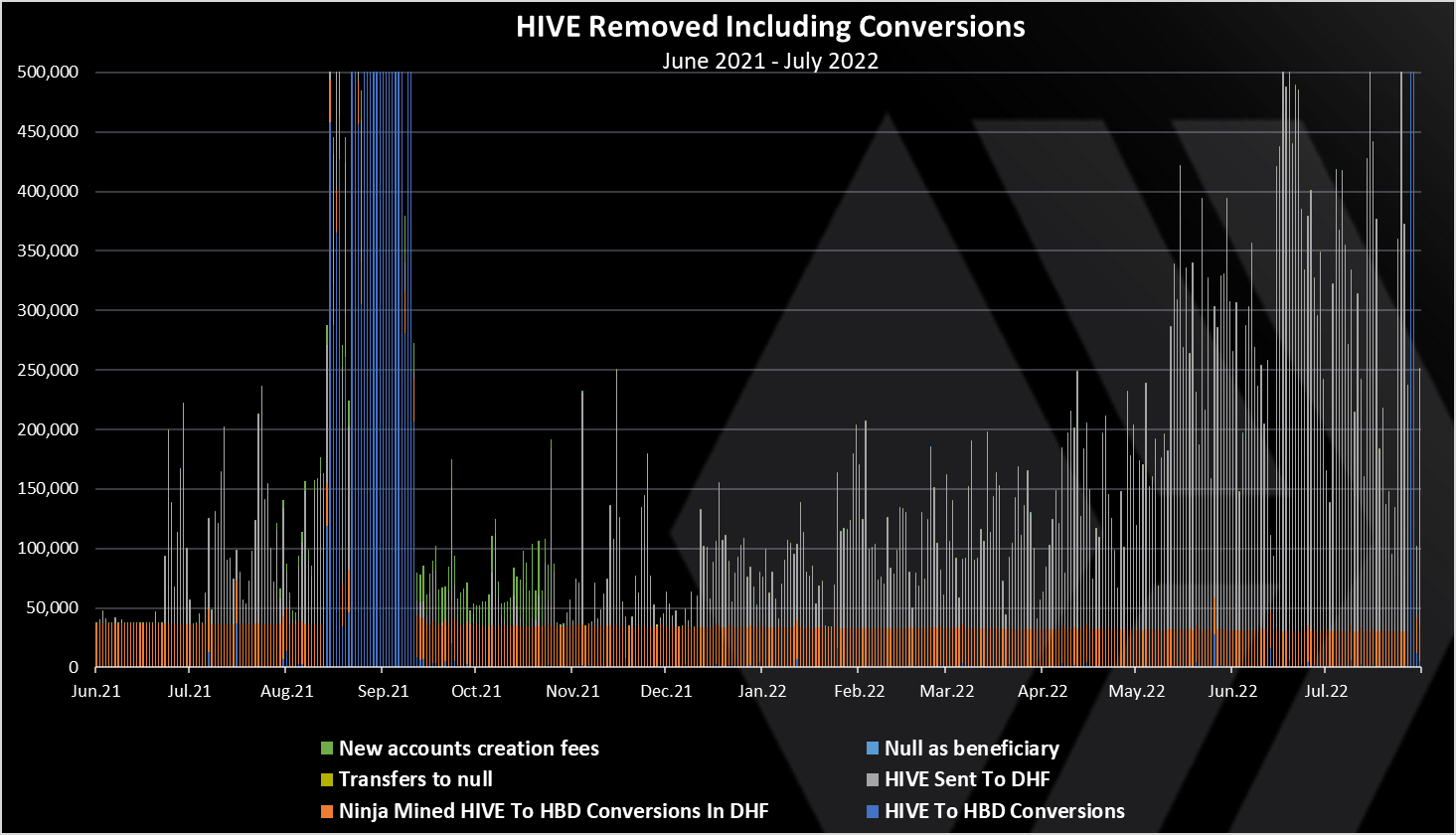 The above takes into consideration six different ways of HIVE removed

We can notice the spike in the blue line at the end of July that represents the HIVE to HBD conversions. A total of 2.8M HIVE was effectively converted to HBD in two days. 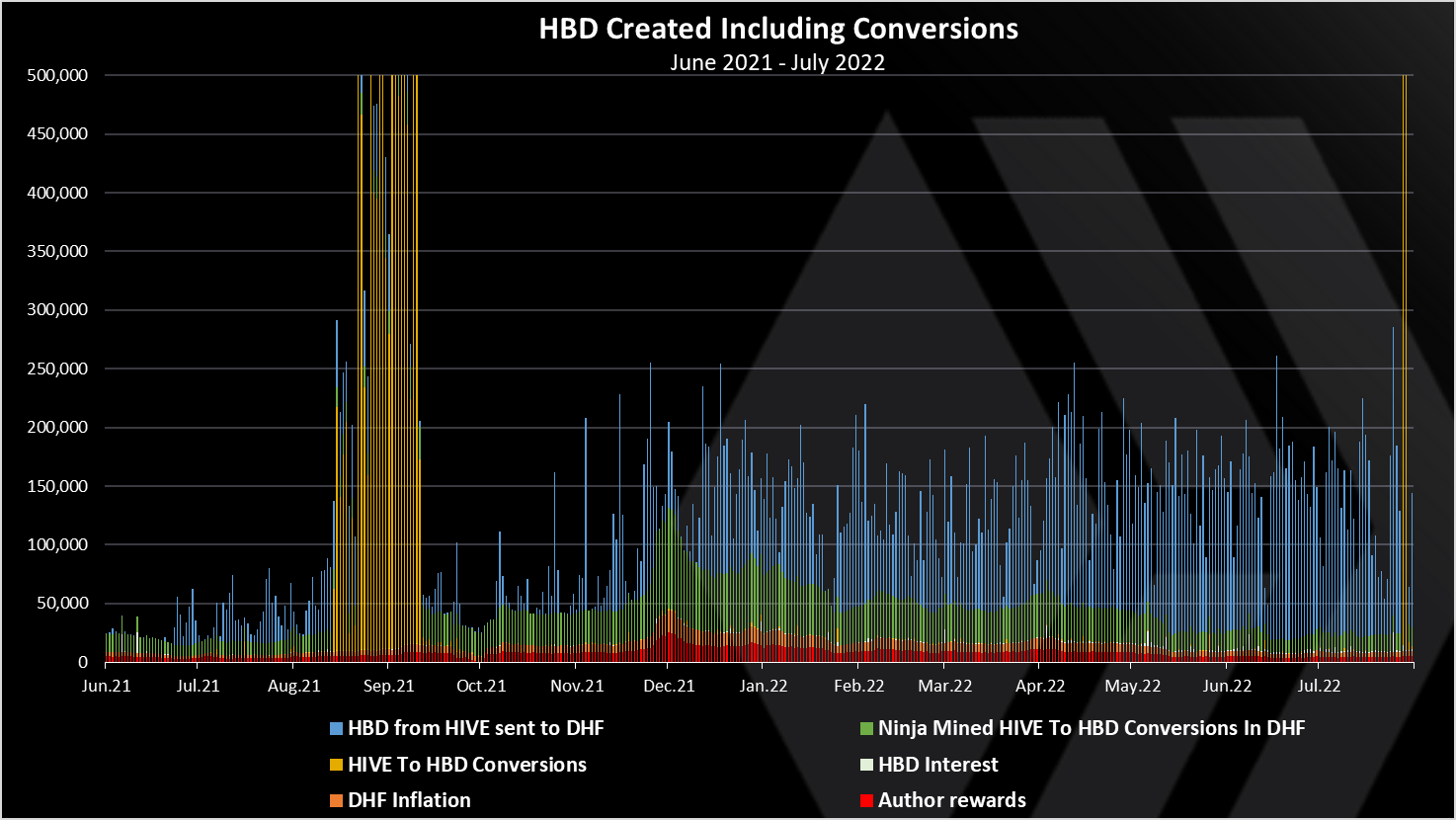 The above is a chart for HBD created without the conversions. It includes to following.

Here again we can see that the conversions are dominant when it comes to adding a new supply of HBD.
The HBD created from HIVE transactions to the DHF are now dominant. This comes from the @hbdstabilizer.

Now let’s take a look at HBD removed. Here is the chart. 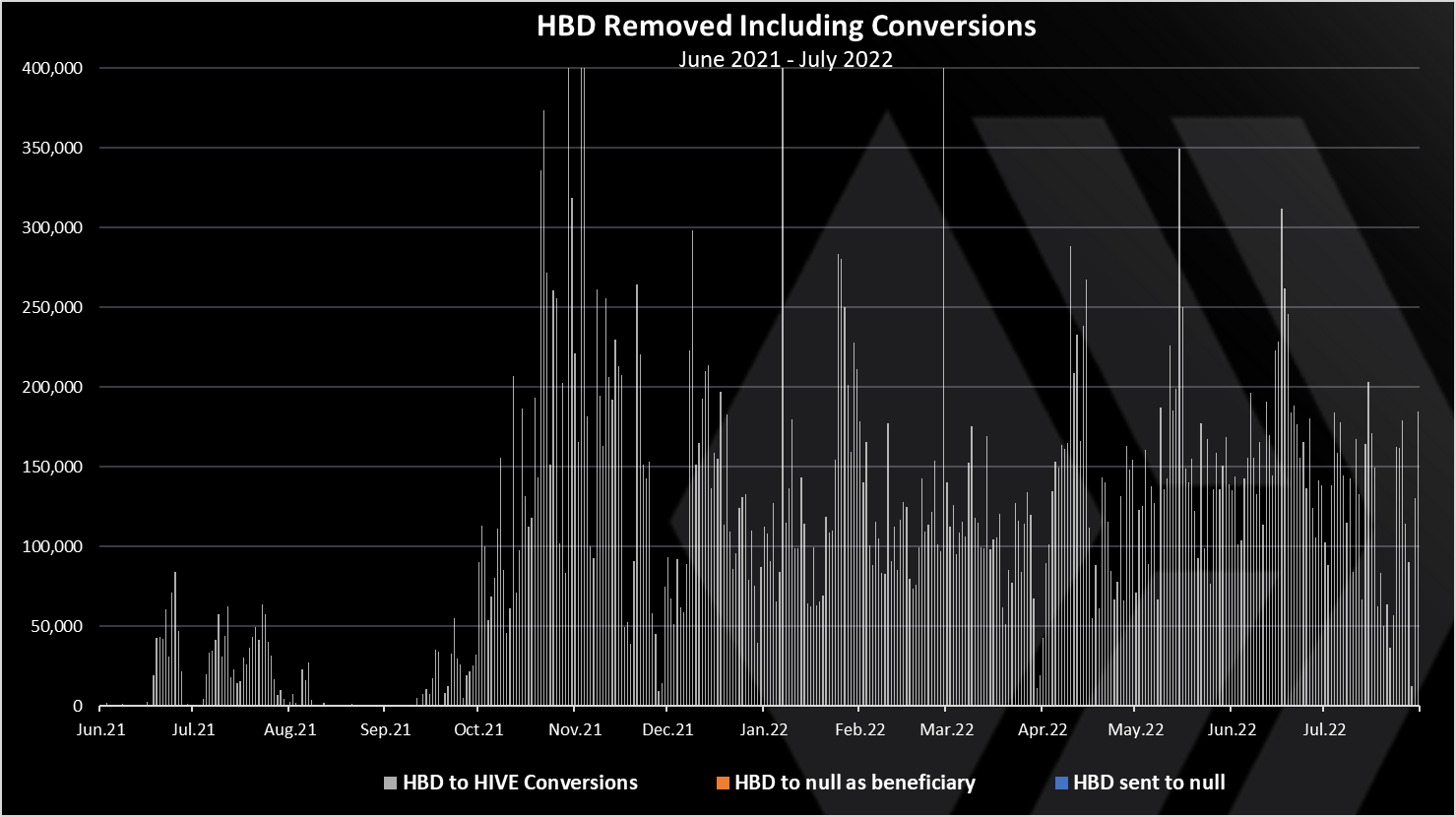 HBD is mainly removed when converted to HIVE, but also with transfer to @null and setting null as beneficiary on posts rewards.

When all the above is added and removed, we get this chart for the all time HIVE supply. 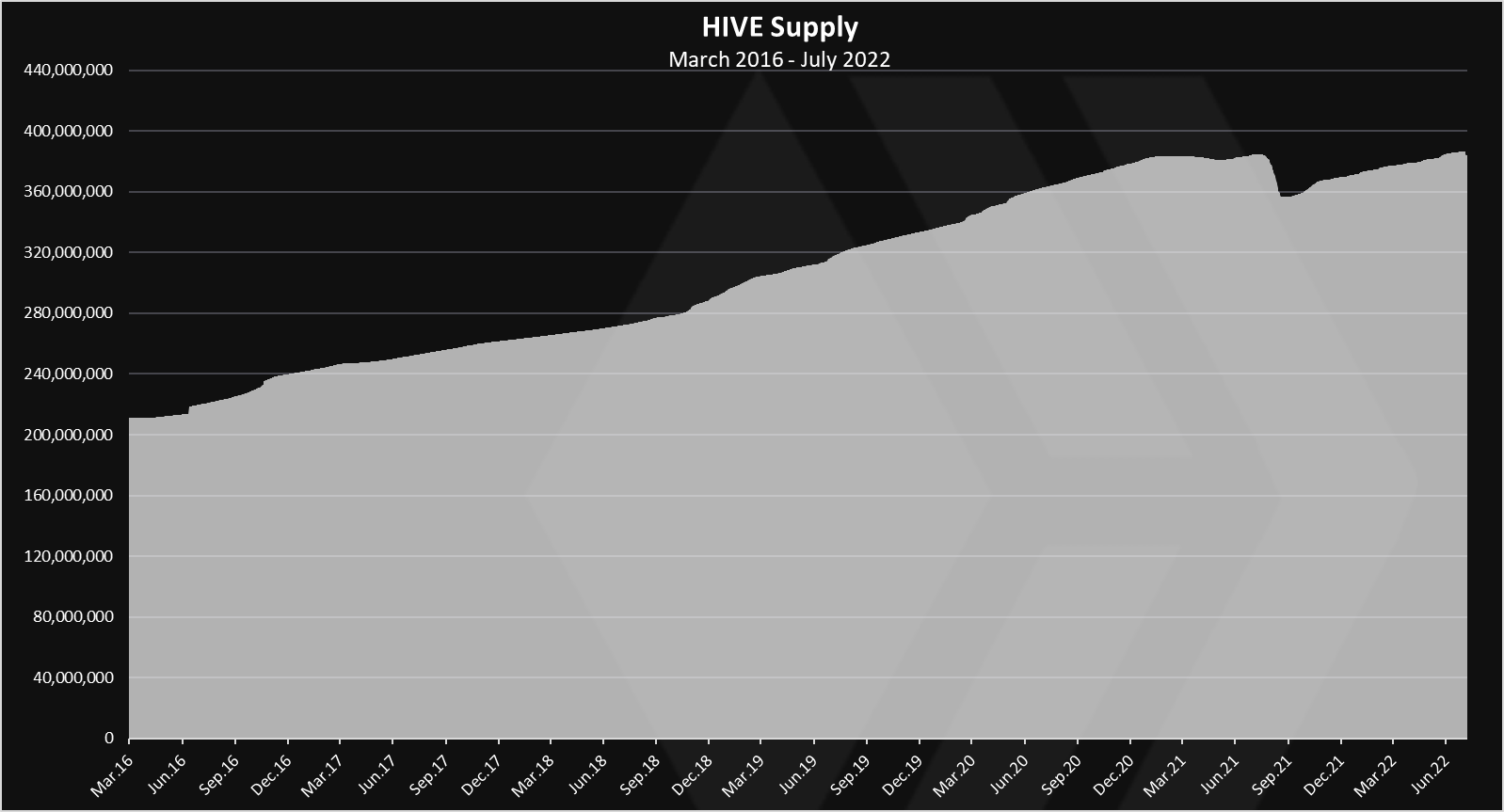 Up until August 2021, the supply was almost steadily increasing with a small fluctuation. Then a huge drop in the supply in August and September 2021. An increase since then up until recently when we can notice the drop at the end.

Here is the chart for the HBD supply. 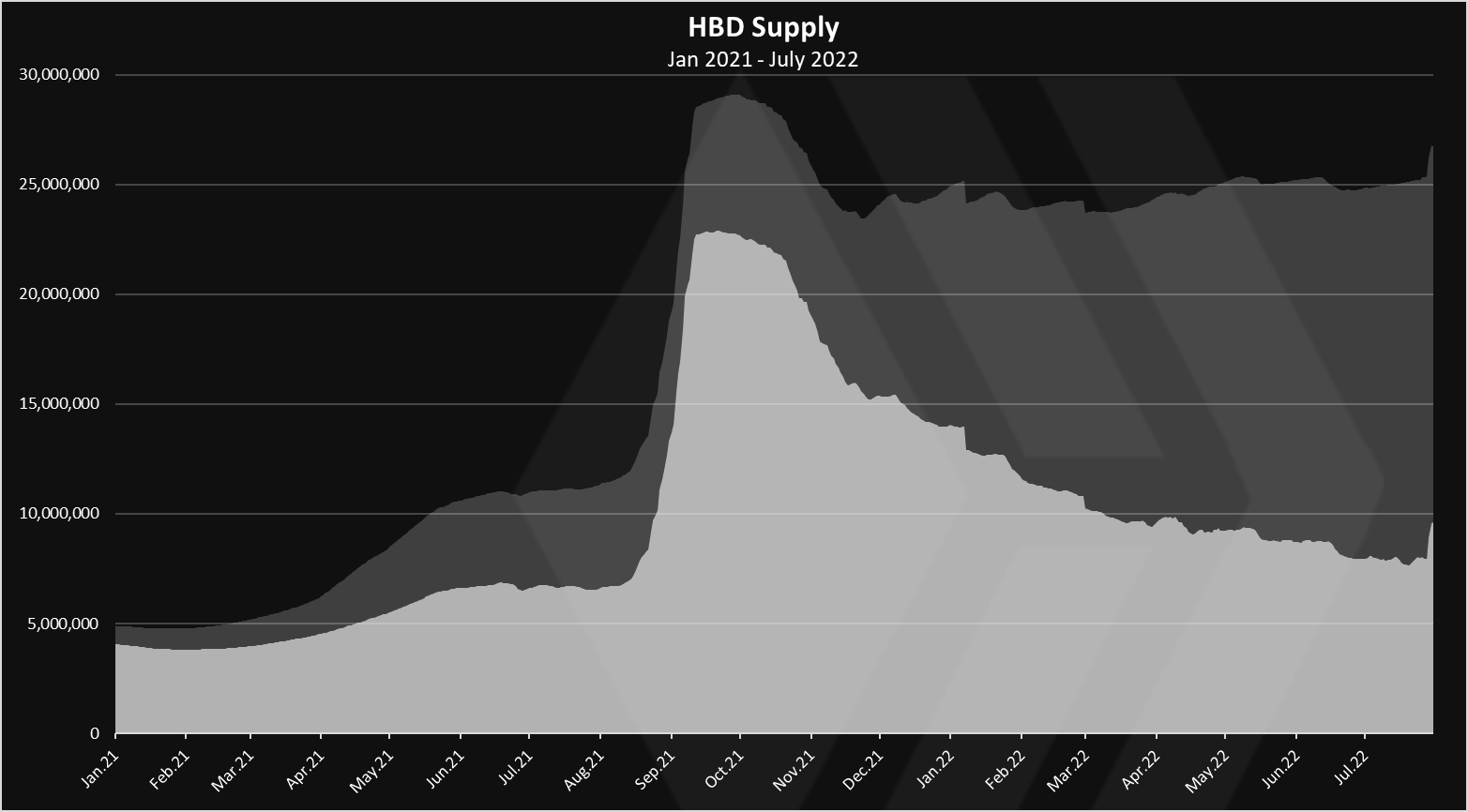 The light color is HBD in the DHF.
As we can see the HBD supply has expanded a lot in 2021, but it has been in the downtrend in the last months.
While the HBD supply in the DHF is growing and it is maintaining the cumulative supply, the HBD supply excluding the DHF has been going down up until now.
In the last month the supply of HBD (excluding the DHF), increased for around 1.6M and the HDB in the DHF also increased for 160k. As mentioned, it was because of the conversions from HIVE to HBD. With this amount of HBD and the HIVE price the debt is now at 4.1%, but will decrease in the following days having in mind the price action for HIVE.

When we add the HIVE equivalent supply from the HBD in circulation to the HIVE supply we get the chart bellow. 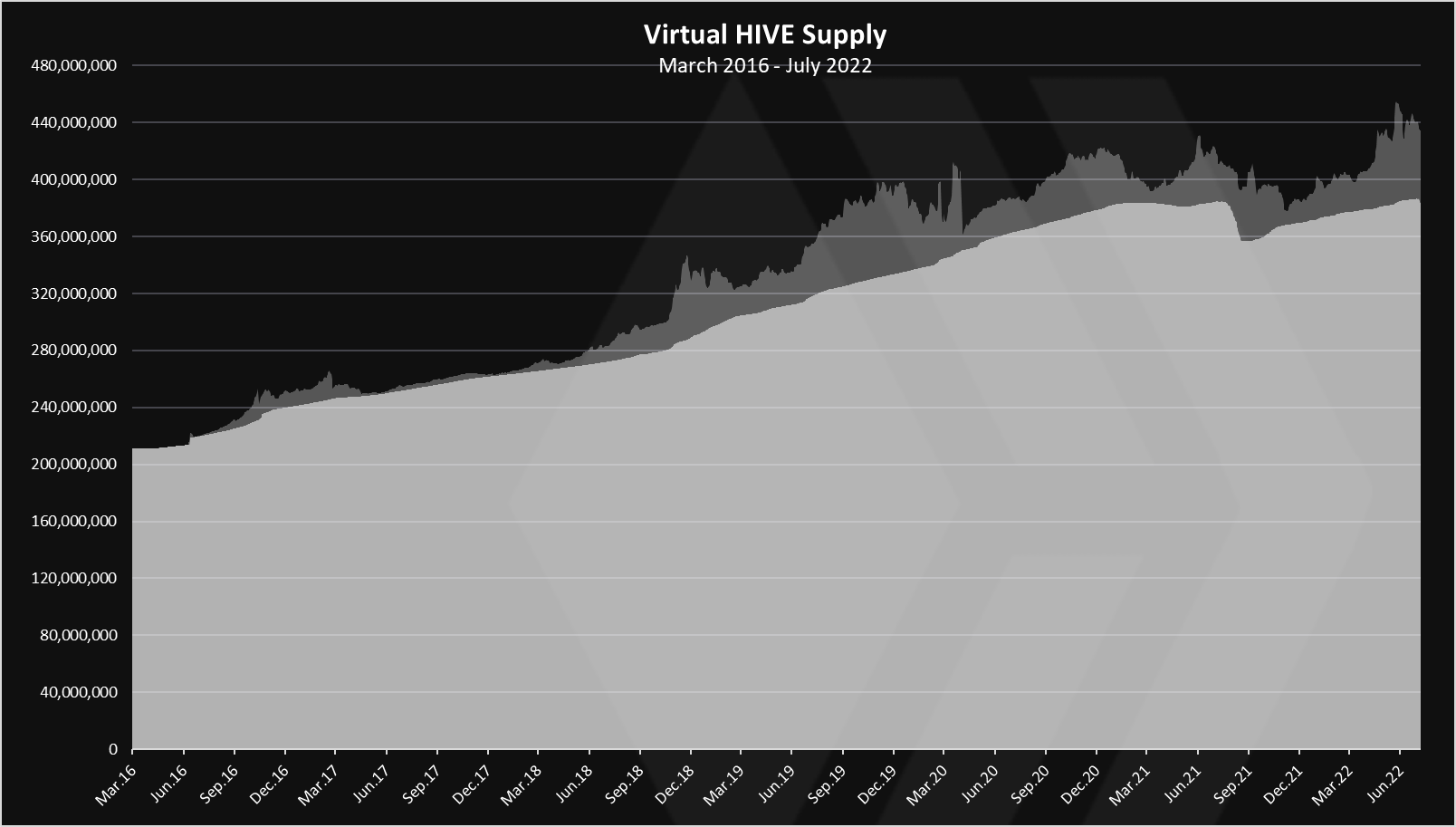 When we zoom in we get this. 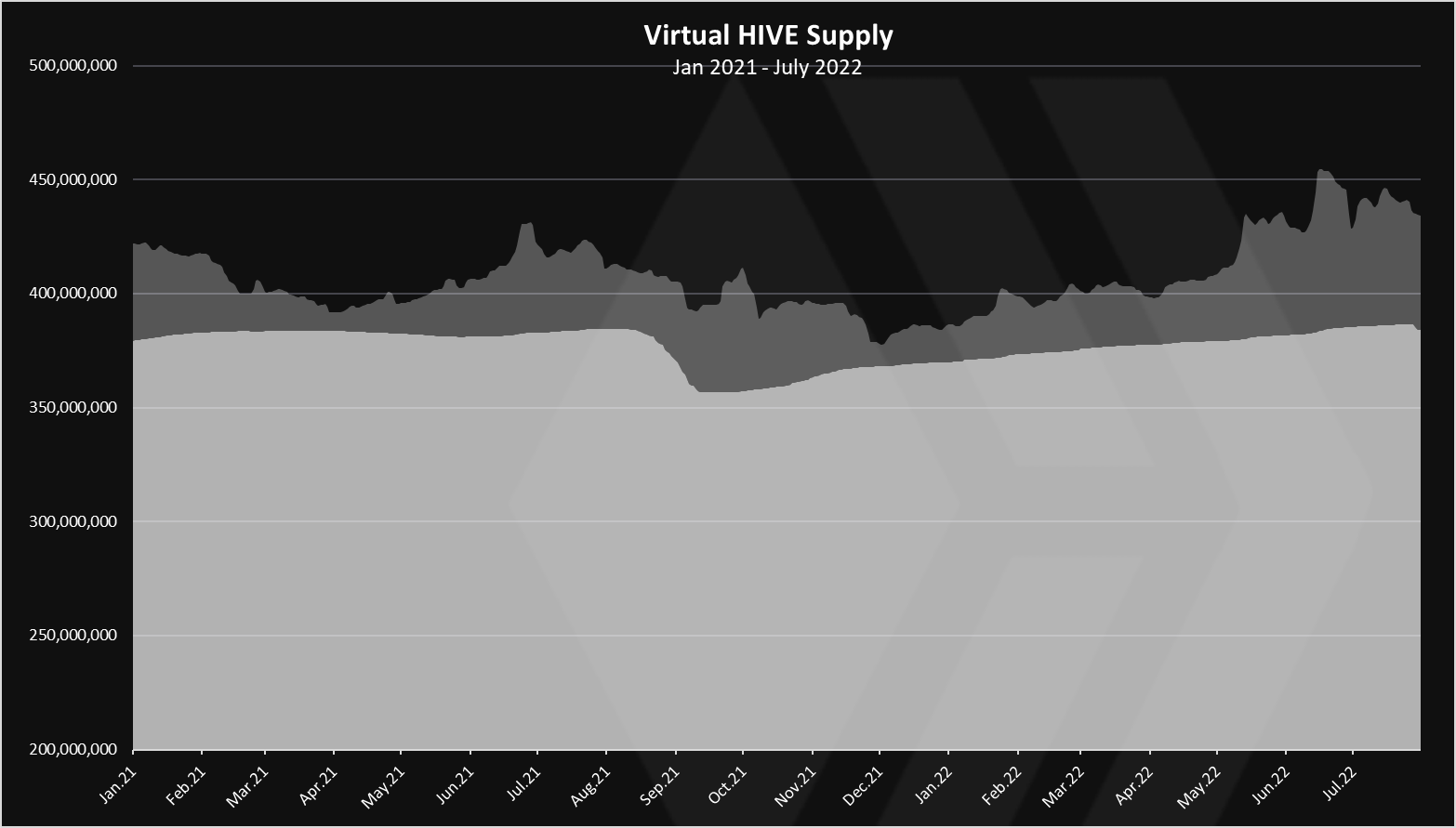 The virtual supply was quite constant in the month, with a drop at the end as the HIVE price started increasing.

If we plot the monthly inflation, we get this. 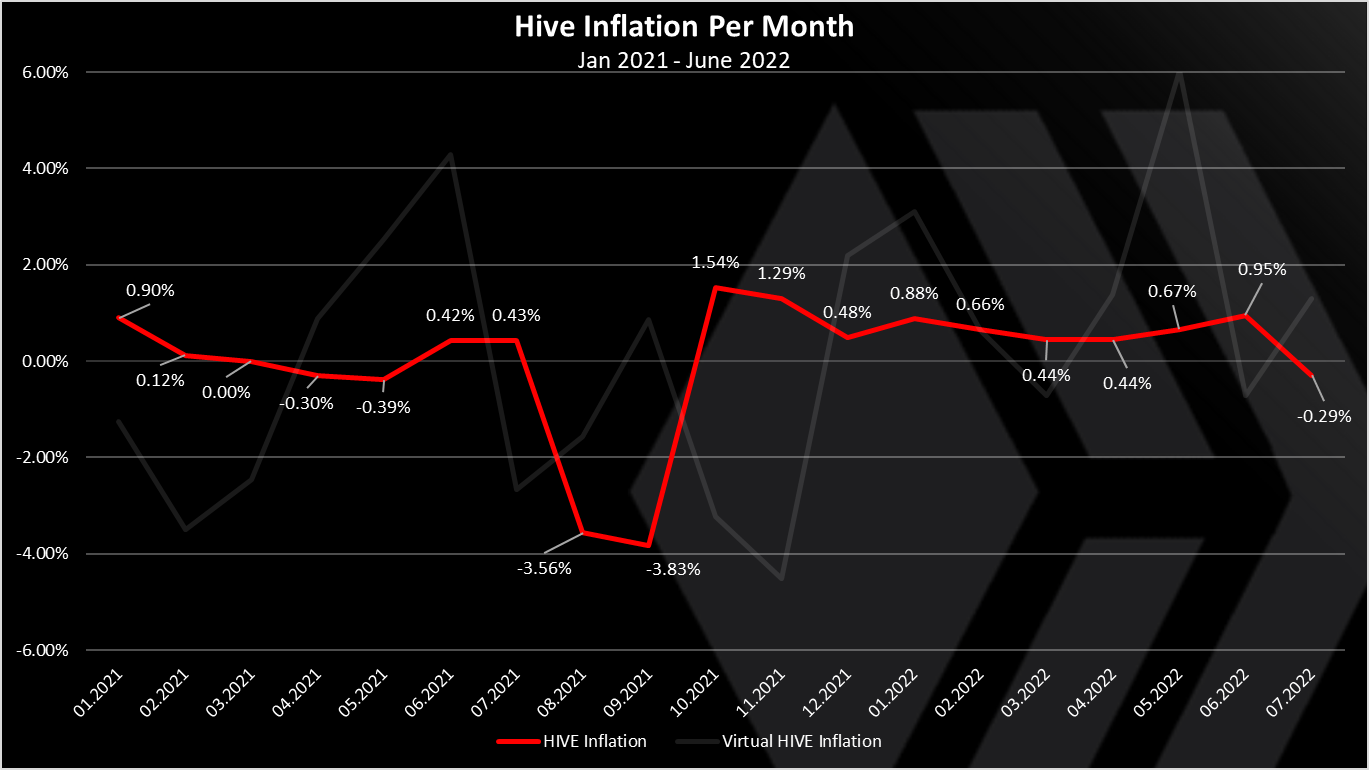 The red is the HIVE only inflation, the light white VIRTUAL HIVE inflation.
The monthly inflation in July is -0.29%! A negative one. In terms of absolute numbers the HIVE supply has contracted from 385.4M at the beginning of the month to 384.2M now, or a -1.2M HIVE reduction in the supply for the month.
The projected monthly inflation for 2022 is 0.58%.
On the other hand, the virtual supply has expanded in July because of the increase in the HBD in circulation, but with the current price action for HIVE it will go down in the next few days as the 3.5 days average price kicks in.

The highest the monthly inflation has been is 1.54%, and on the low side it has reached negative -3.83% in September 2021. A reminder that these are monthly numbers, to get the yearly equivalent just multiply *12.

The yearly inflation, projected and realized looks like this. 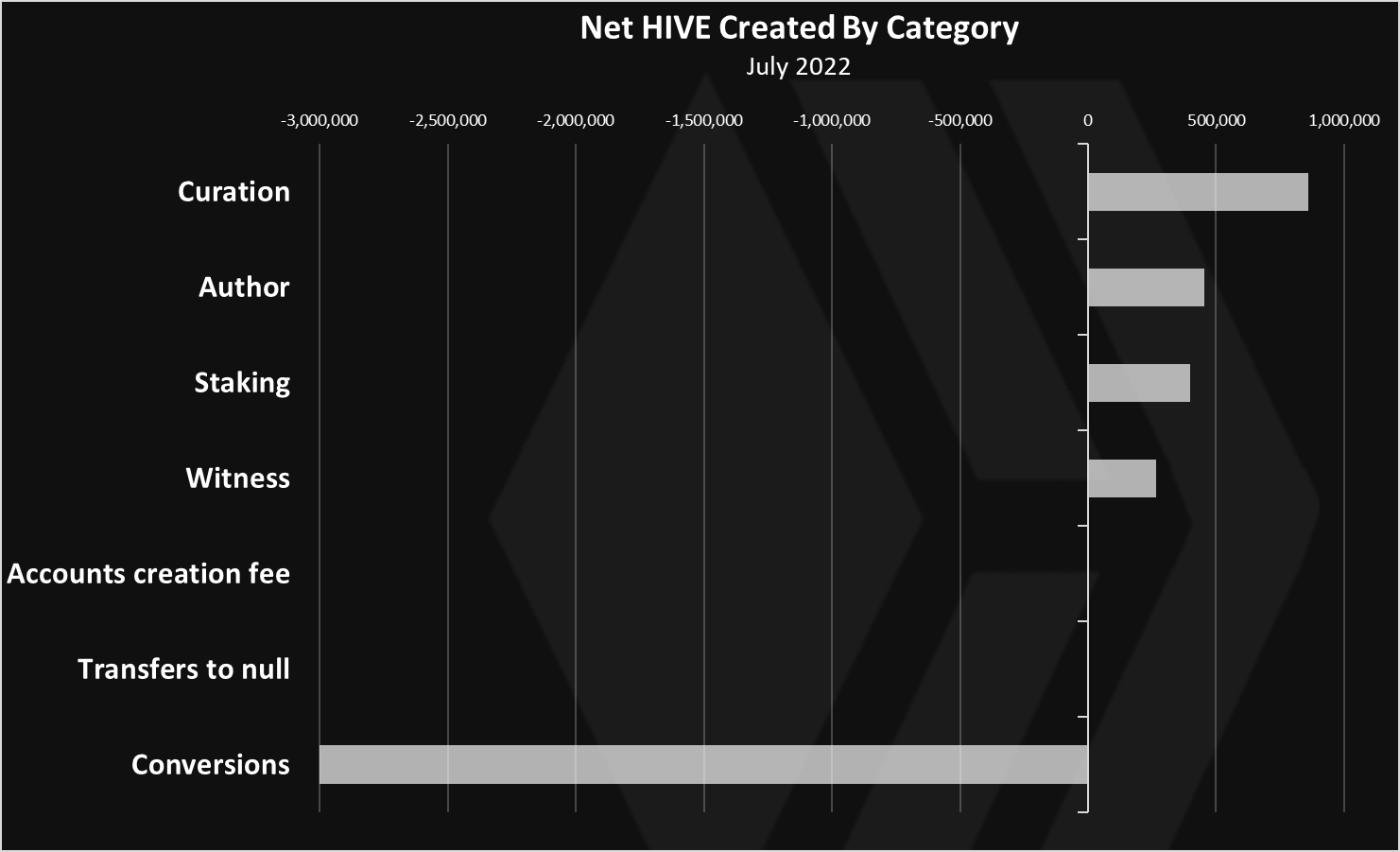 Quite the differences in the past years between projected and realized inflation. Again mainly because of the HBD conversions. In 2019 and 2020 we can see that the realized is quite above the projected, while in 2021 the inflation is negative -2.7%.

2022 is projected at around 7% (0.58% monthly). For the first seven months of the year the inflation is at 4%, and it is set to go to projected level. It remains to be seen how this will unroll in real time.

Here is the new HIVE put in circulation by category in July 2022. 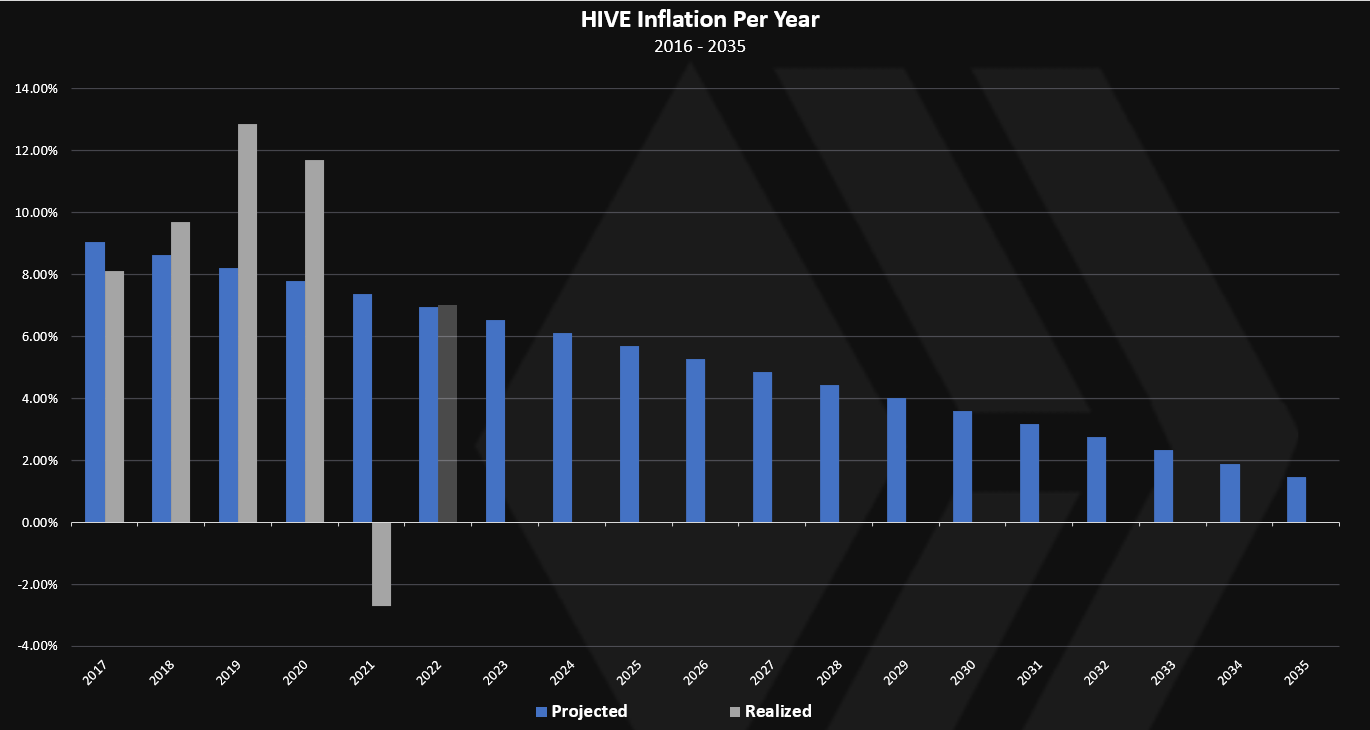 We can notice the -3M HIVE removed with conversions in July 2022.
The curation rewards come on top in terms of HIVE created with 861k HIVE. Usually the conversions are on the top for HIVE created but this months it is the opposite!

Inflation makes imo only sense to watch year over year.

Month over month is something the FED would watch :D

I mean it could be 10% 2 month before and -0,5% months after and it would be in theory deflationary :D

Yea yearly are relevant, I have included the yearly chart on the end as well.

excluding wallet creation cost would be interesting. Like natural "inflation" versus "inflation by use".

if the HIVE will be burned-it will be a great a pump always. I have no idea why it's not working until?

Great stats Dalz!! Many thanks for your work. Lets see how this deflation works out for next month if the trend continues and now we have the crazy hive pump again! never a dull moment! lol

I just bought some HBD.

Stats are interesting. I have voted for you, as you do so much work for the Blockchain !

Great! Really love the transparency of BlockChain and Hive tokenomics.

Thanks for the Report, learned lot's of new stuff today!

Waking up to a 55% pump of hive was a pleasure to be sure. Looks like the stabilization system is working fine.
Nice analysis @dalz well done mate. 😎👍🏼

I beg your pardon ser, this is a mini moon ser :)

and now what? why Hiver's are not glad with the Hive's Price?

I don't think you heard me complain. As for others, they can do whatever they want, doesn't bother me


What did the hotdog say to the bun?
Listen buddy, i'm going to be frank with you.
Credit: reddit
@cmmemes, I sent you an $LOLZ on behalf of @antisocialist
Are You Ready for some $FUN? Learn about LOLZ's new FUN tribe!
(1/1)
1

Awesome stats @dalz!
Thanks for sharing!

This is amazing and it shows how hive as been stable, you start are always amazing. Thanks for sharing this information

that's the great thing about #Hive since we can exchange our tokens from one side to another and vice versa but how do you say the most common thing is from HBD to HIVE, these are steps that we must learn to get the maximum benefit possible from all our forms of rewards

Now, I understand better…. Learnt a few things today.
Thank you for this @dalz

It's really great statistics that you have shared. People should avoid converting Hive Into HBD to control the inflation at the platform. 60k daily inflation is really much

It is very interesting.

Seems the Korean pumps have the most impact upon the distribution of Hive and HBD.

A detailed study of the movements of hive is presented here and this is a great job you have done. With the statistics shown, hive would remain in an up ward trend even in the coming months. 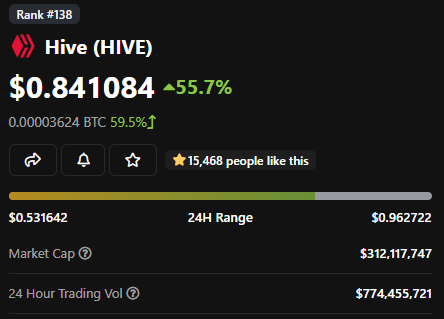 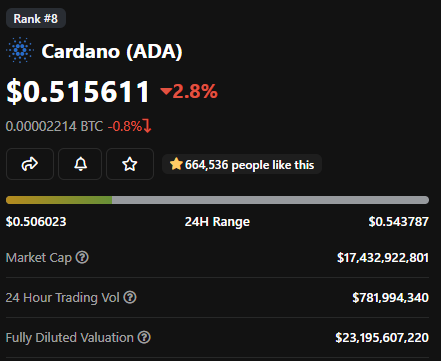 The best part is how large HIVE trading volume is compared to the marketcap. It is mostly the Koreans causing this. Imagine how things would be if HIVE was more widely available. We at least have HIVE on BNB and Polygon thanks to @leofinance We can expect increased DeFi trading volumes over time. Centralized exchanges are the more difficult ones.
!PIZZA
!LUV

these are bots) in a few days the volume will be nearly 1-3M. in november 2021 it was the same situation

That last graph really puts things into perspective about how much Hive there is left to get. Pretty wild how fast that reduction is going to happen and most likely we will continue to see it deflationary more often.

The yearly one?
Yes it does ... just needs some patiance :).
Fun fact these years are with highest inflation in terms of absolute HIVE created per year from regular inflation .. around 26M per year ... it will only go down from here