It's been awhile since we checked the data for the Hive games.

Let’s take a look at the number of active accounts by game and in general. 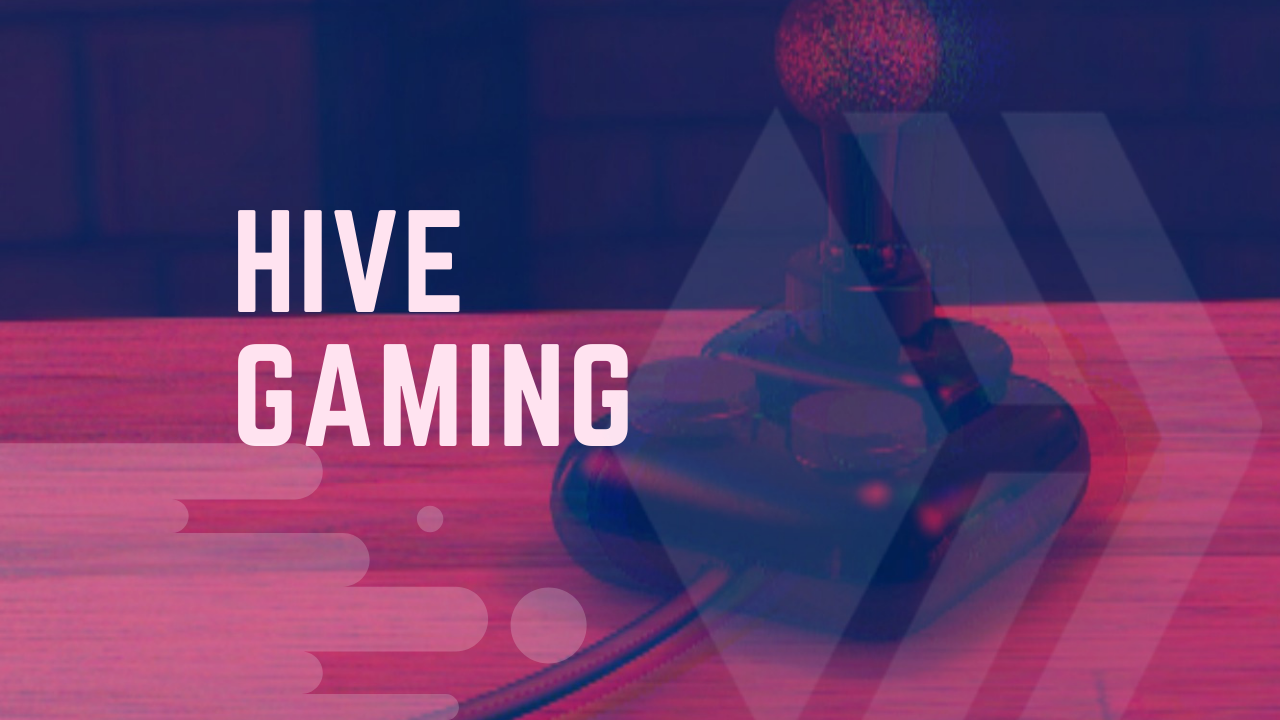 Until recently Spliterlands was the main factors behind this, but now we have more games around.

The gaming activity/transactions can vary a lot depending on the specifics of each game. Some games like Splinterlands require a lot of activity. Others like dCity don’t require activities and are quite idle. Analyzing the activities only by number of transactions might not show the real picture.

Games are using the custom json transactions. Here we will dig into them and allocate the individual gaming transactions and accounts making them.

The chart for Splinterlands active players looks like this. 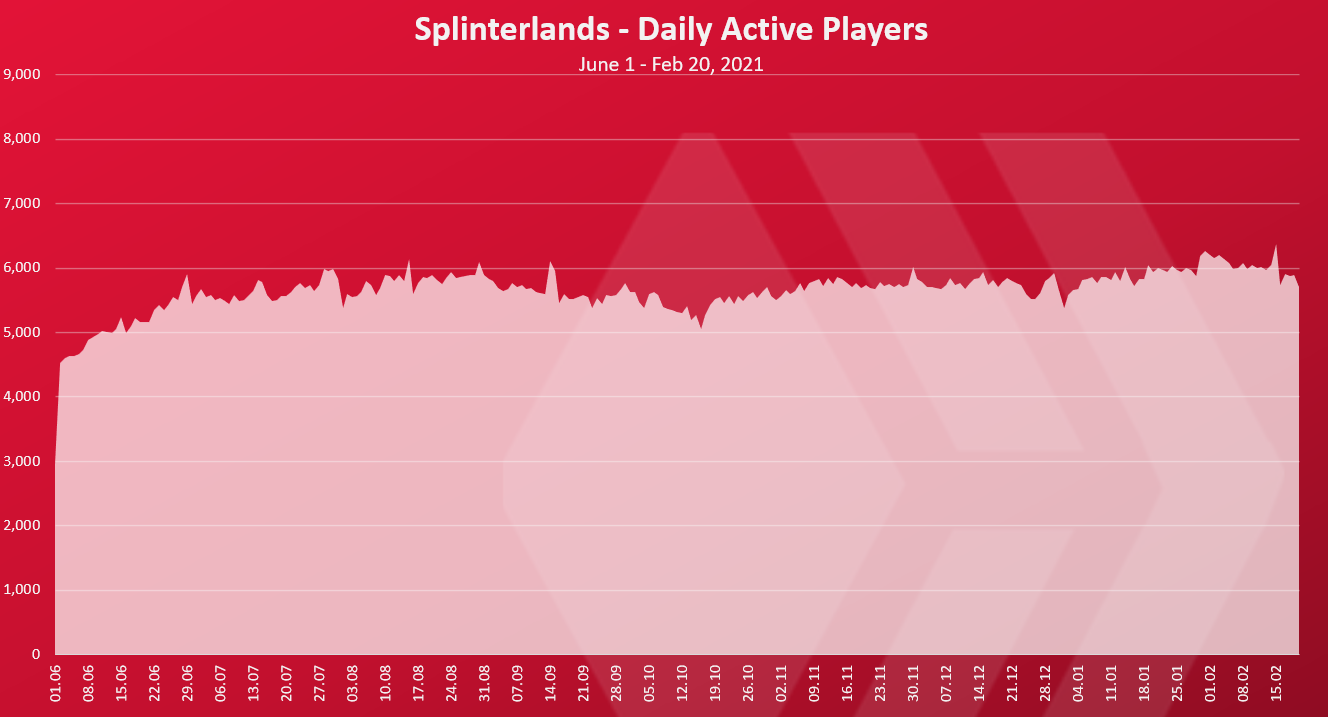 The chart for Crypto Brew Master looks like this: 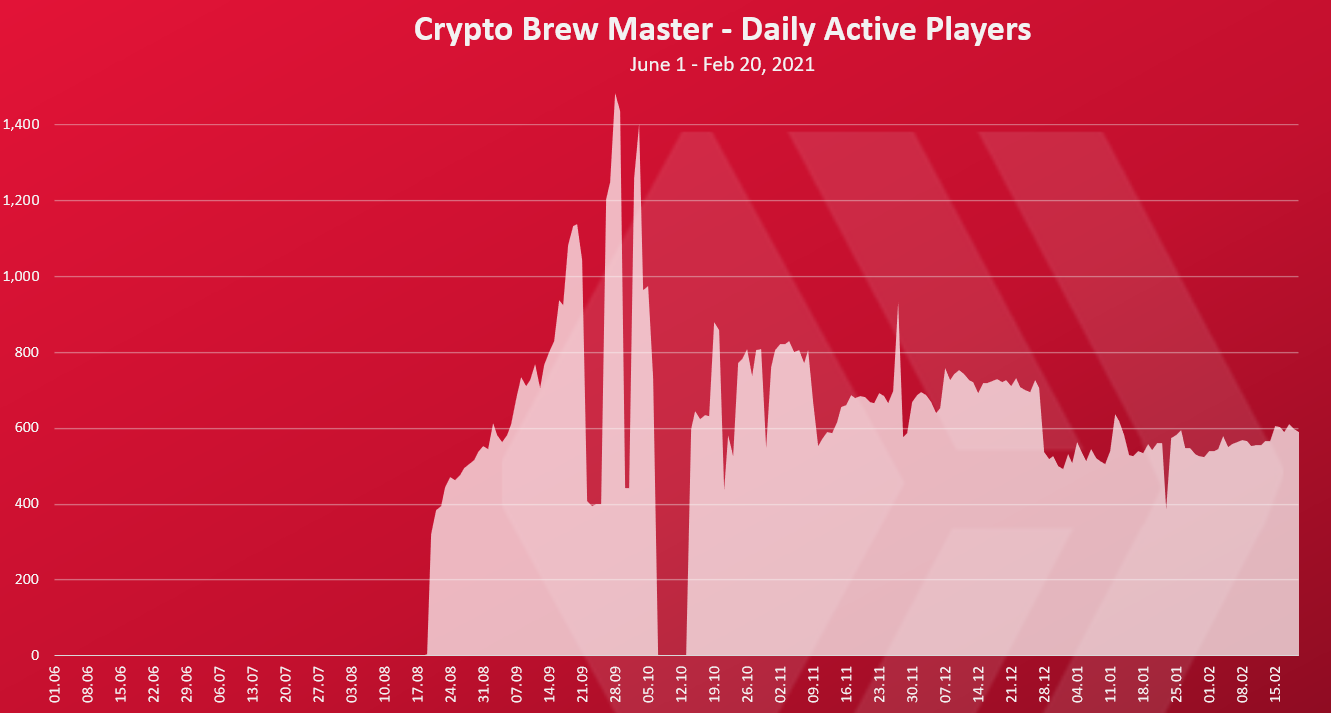 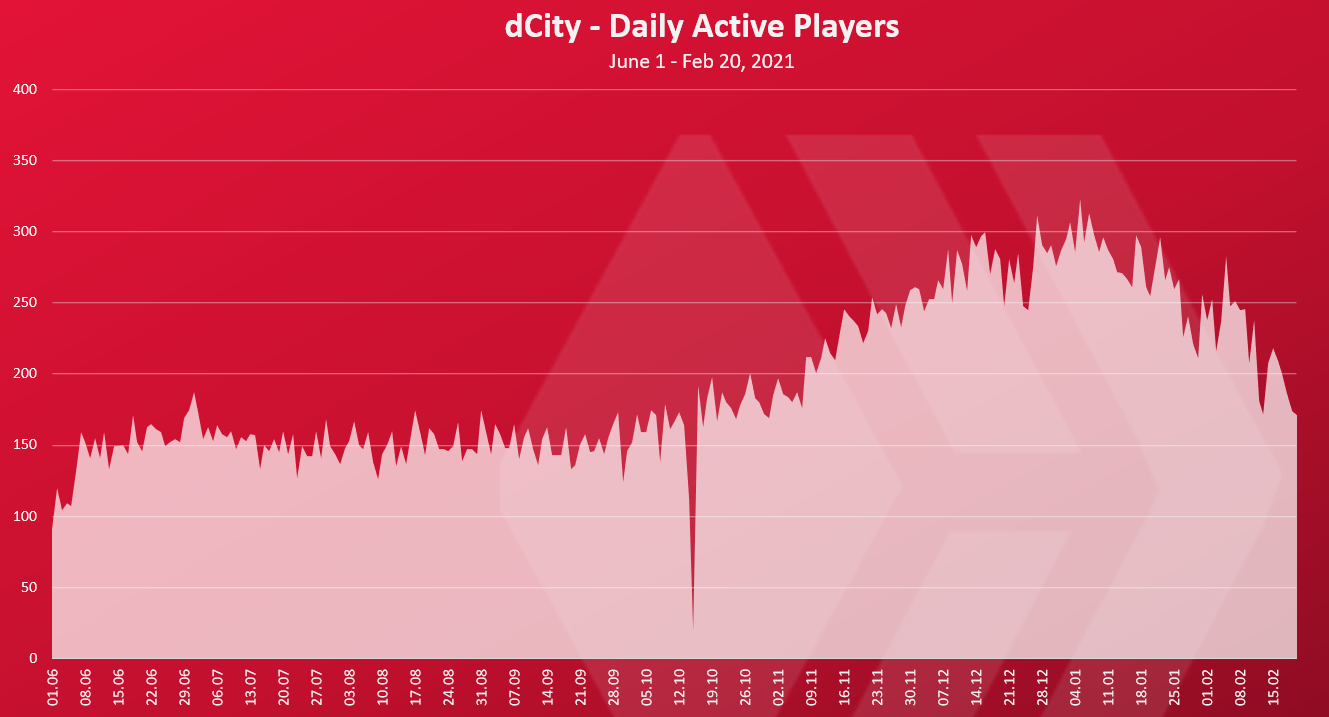 dCity is a bit special in terms of active players. The only activity dCity players do is buying/selling cards. To get the numbers for active players I have been looking in the players buying from the house and players buying on the market.
The numbers have grown in the end od 2020 reaching a 300 accounts per day, and then a drop in the last month. The 3rd edition is long awaited here, so maybe numbers will improve after this.

The numbers for active players in dCity might be more accurate if we look at the monthly active users, since not all the players are making daily transactions. The numbers for this will be presented bellow.

Another game that recently launched on the Hive blockchain. Here is the chart. 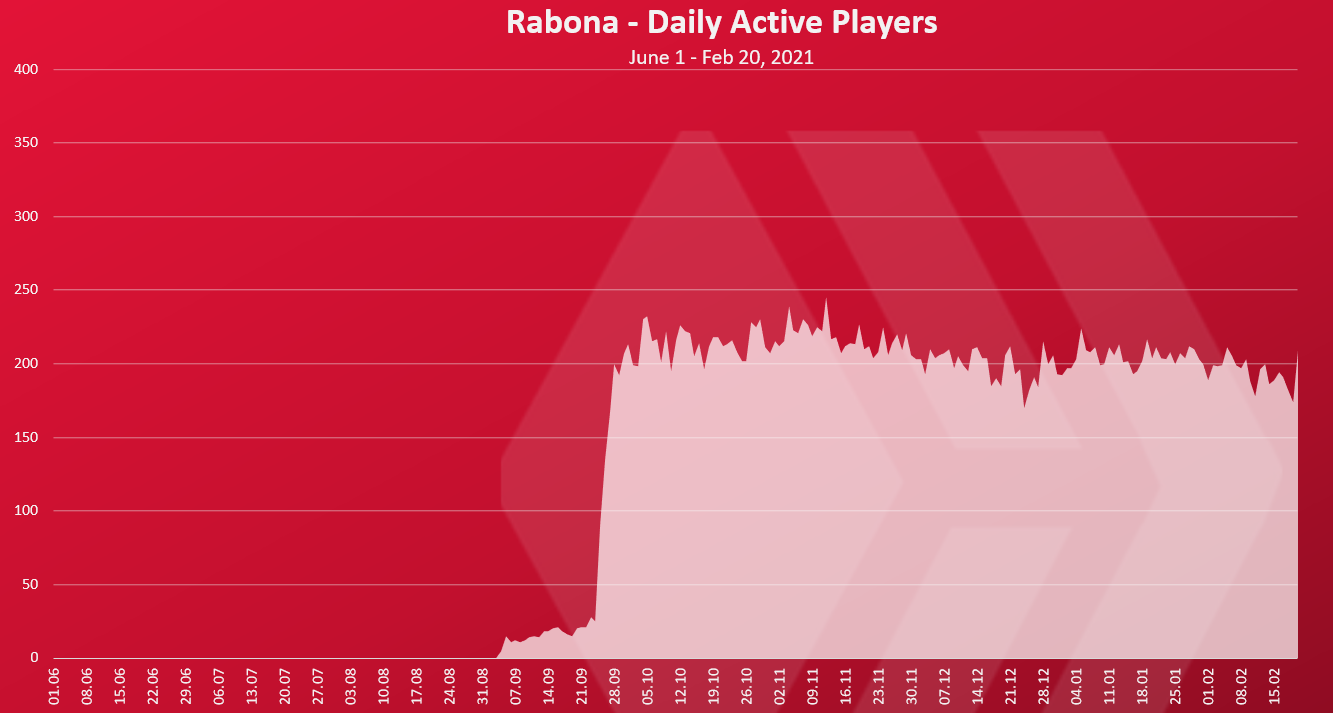 Rabona started its journey in September 2020 and has reached more than 200 active players. The numbers have been steady since then. 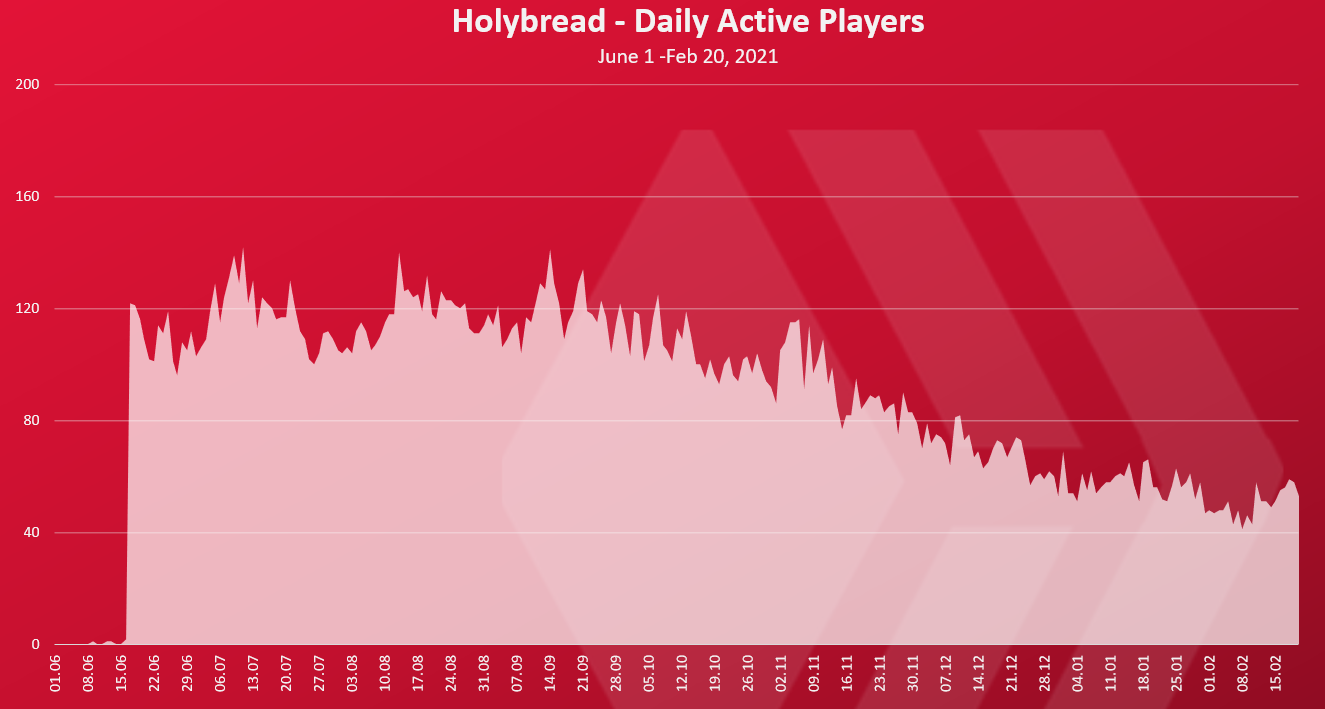 Holybread has been around for a while. The numbers of active players seem to dropped a bit in the period from to under 100 per day. 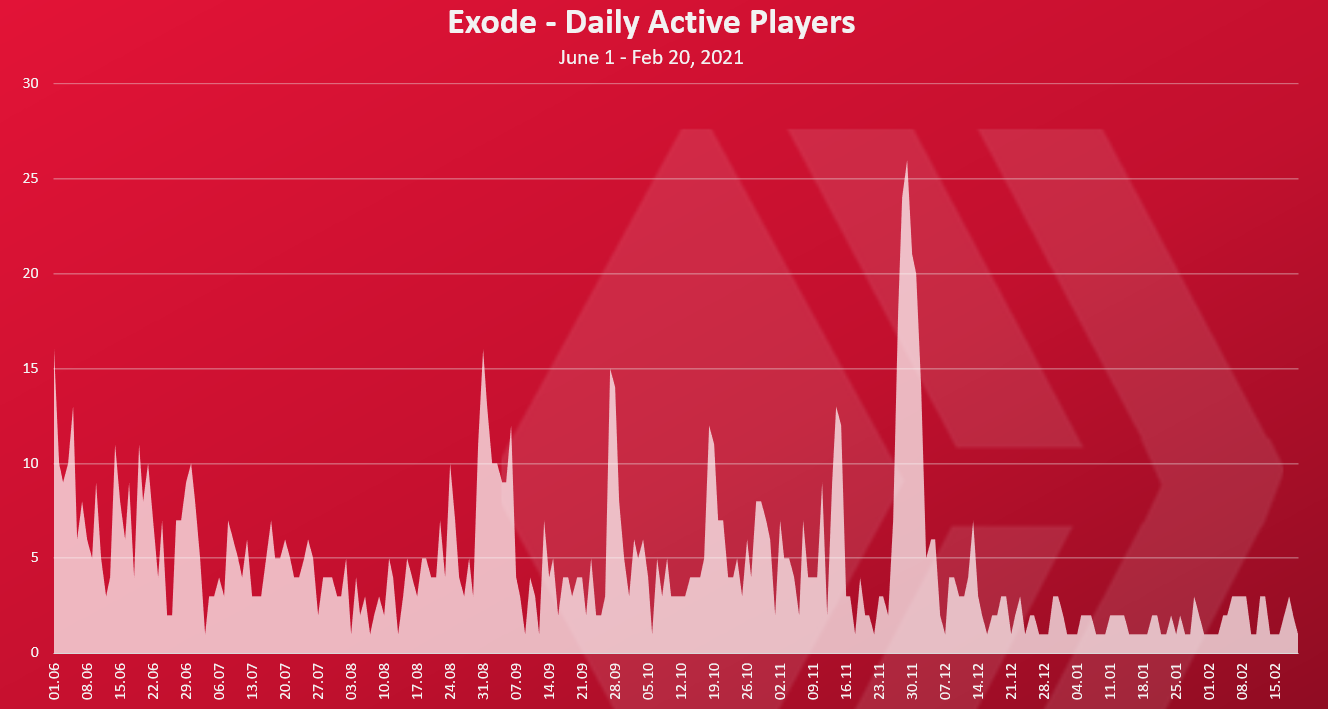 Exode has a small number of daily active players, under 10. There is a spike in the last days though.

Rising star is another Hive game, but players activity is not recorded on the blockchain so I couldn’t get data for active players. The discord server has around 600 members. From what I have seen in other games, the number of discord members can be a bit higher than the daily active ones, so Rising Star is probably somewhere around few hundreds active daily players.

When we plot all the above, we get this. 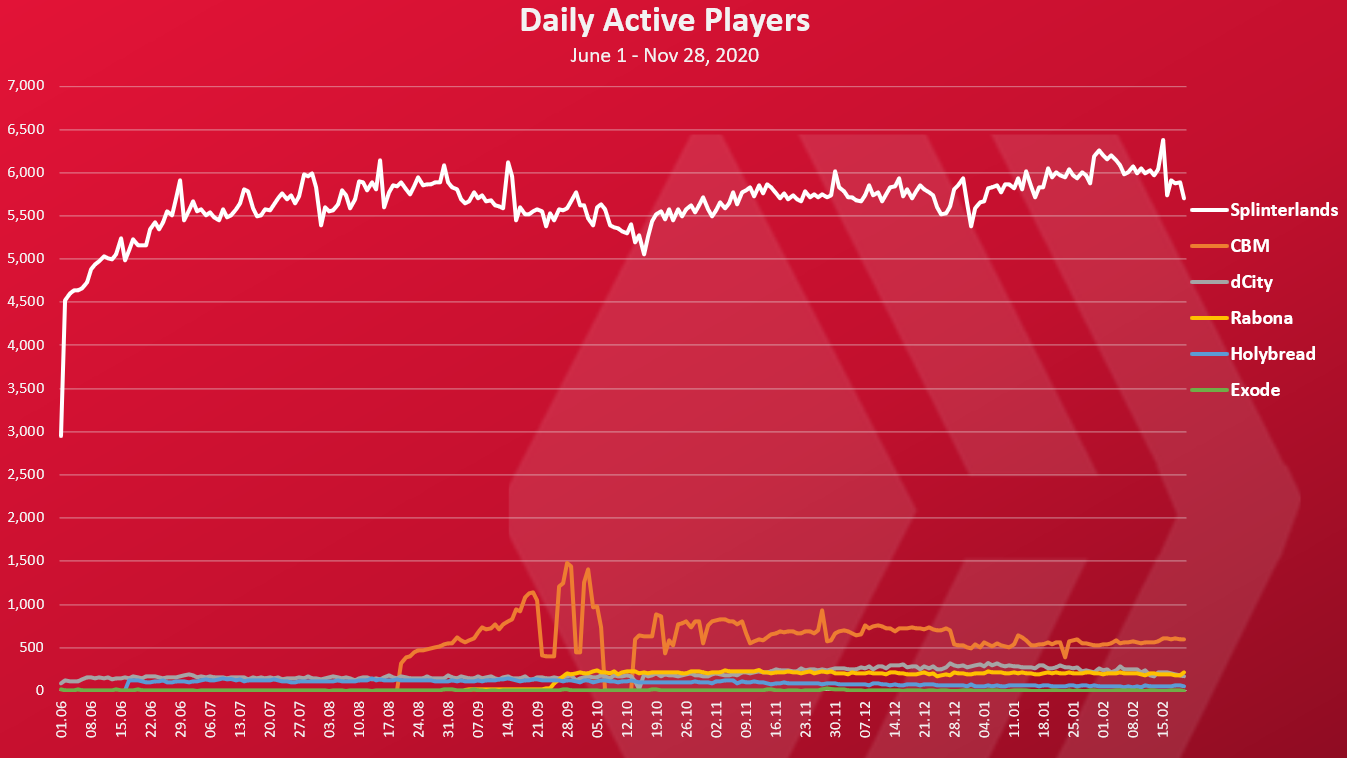 Obviously Splinterlands is leading by a lot. This is expected since they the number one game on the blockchain and in the crypto gaming industry.

Still if we look a year back all the other games were not around or just few experimenting. We now have a few that are already established and growing.

The number of monthly active players is probably a better metric to track active users. Here is the chart for the games above. 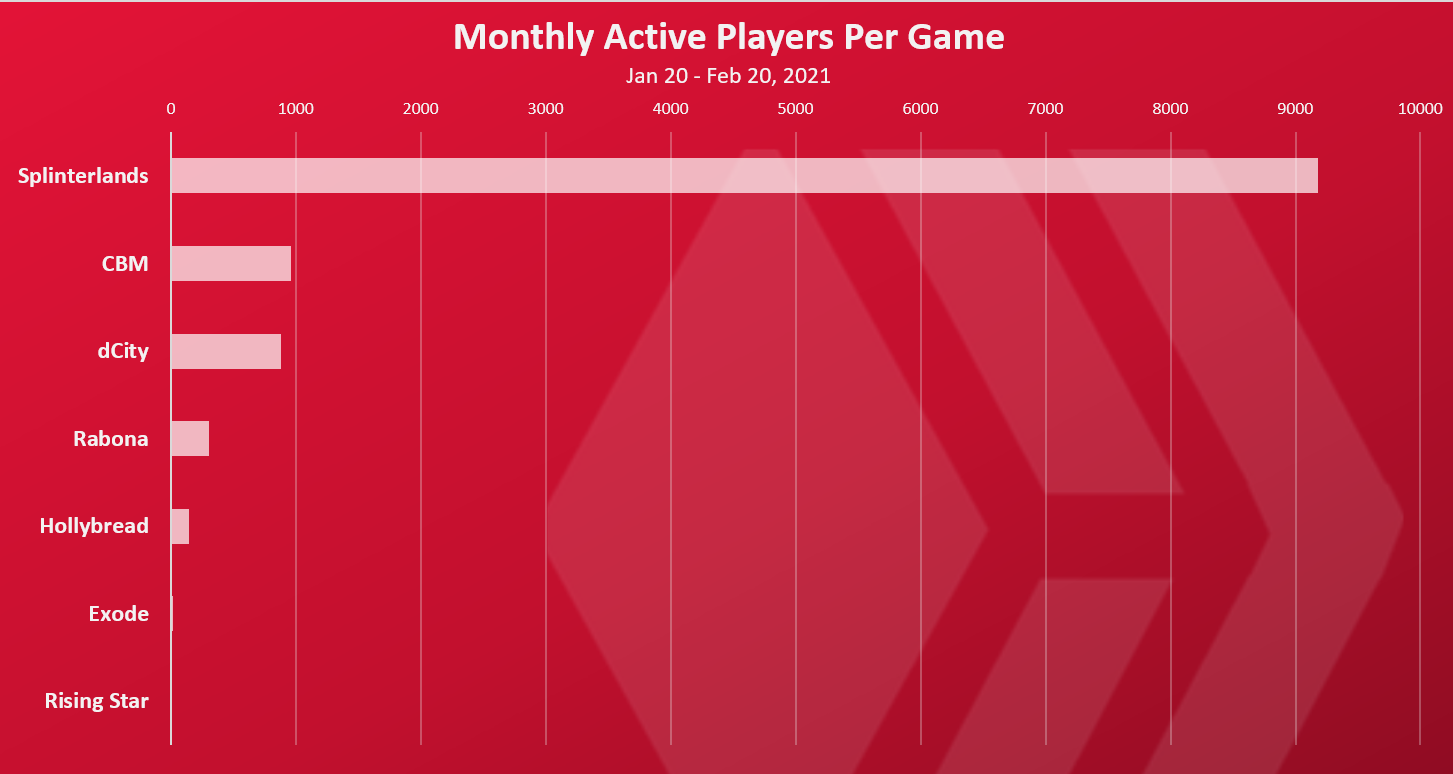 Splinterlands comes on the top again with more than 9k active players. Crypto Brew Master is on the second place with almost a 1000, followed by dCity with almost 900.

If we combine all the above, we get somewhere more than 10k monthly active gamers on the Hive blockchain.

Note: There are more games than the Hive blockchain than the ones presented here. These are just some of the most notable ones.

Overall in the last period the numbers for active players on the Hive games is quite steady with some slow growth for Splinterlands and decline in the other games. The DeFi craze is the hot thing in crypto these days, and even some of the games in the industry are going towards the model of staking items and farming. The Splinterlands expansion with lands is in this direction as well. Dcity is all about hodling cards and farming but it has some challenges before the new edition of cards is released.