Is The Mythical Altseason Finally Upon Us? | Where are we now in the market cycle?

The crypto bull is not showing signs of weakness. But where are we exactly in the market and especially when it comes to the all-season market? 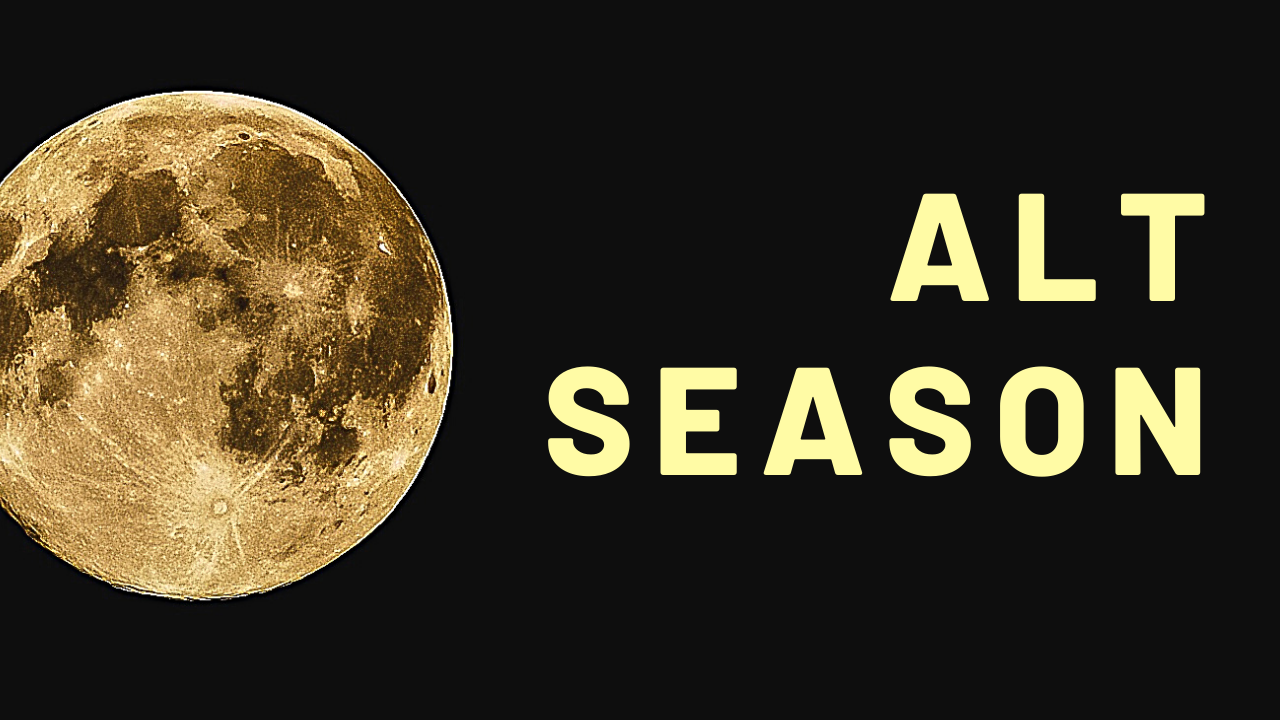 The old saying, history never repeats but it often rhymes, is something that is used when it comes to the crypto industry and its four years cycles that are happening around the bitcoin halvings.

We have seen this in terms of price, and it have shown a remarkable similar pattern as the last two halvings in 2017 and 2013 before.

Bitcoin has been acting in a very predictive pattern in terms of it cycles around the halvings. The only difference this time might have been the drop in March 2020 due to covid, but that was a massive chance for everyone looking to buy in. If everything goes according to plan BTC might have some fuel left until the second half of the year reaching 100k and beyond.

What about alts? Where are we in the market cycle in terms of alt-season?

We will try to answer this question using the following indicators:

Unlike the price chart of BTC and the halving events the Bitcoin dominance indicator BTC.D seems to have a bit shorter history. Most of the tokens were not around before 2015 or even 2017. Most of the historical data for them is from the 2017 halving and afterwards. Before 2017 BTC is just to dominant with more than 90% share of the market. 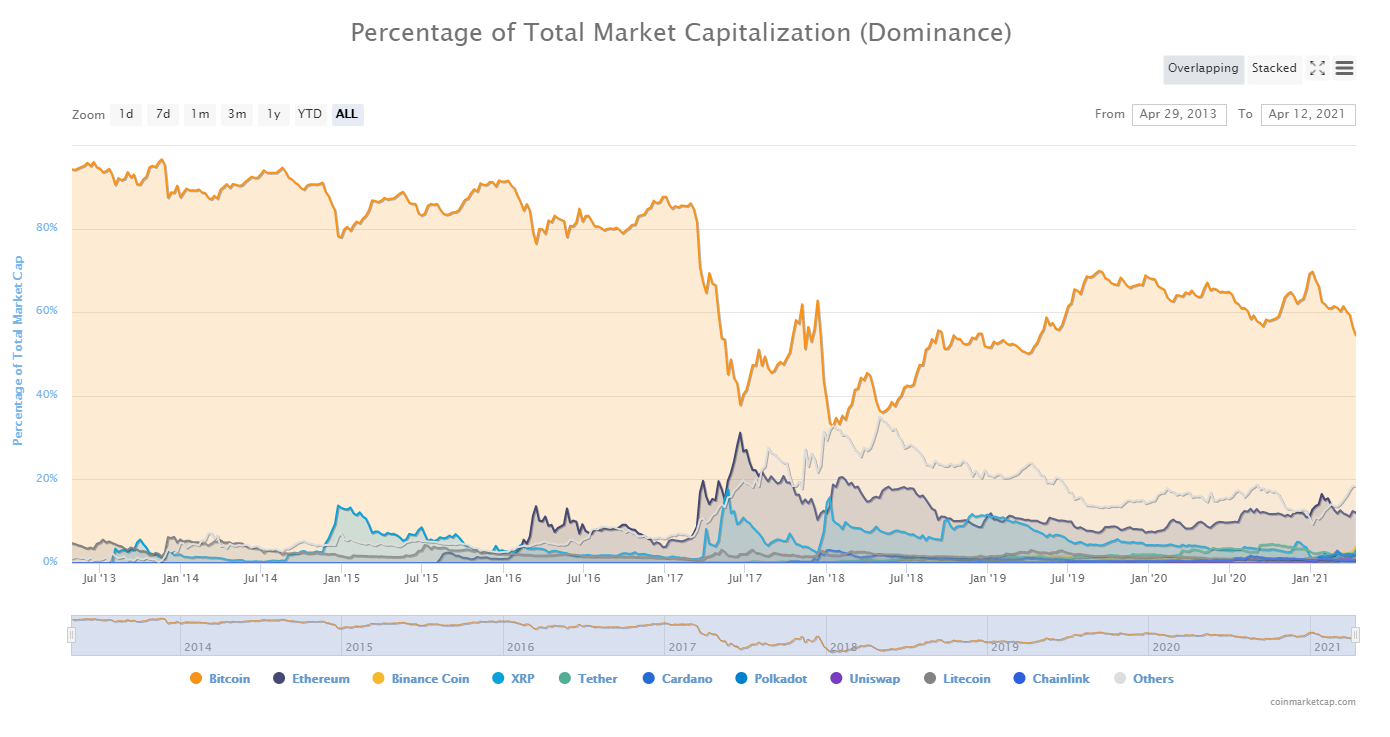 The above one is from coinmarketcap and it includes the other tokens as well, like Ethereum etc.
The clean BTC Dominance chart looks like this.

We can notice that before 2017 the BTC dominance is extremely high at 90% plus and this period is just not an indicator.

In the bear market the BTC.D peaked in September 2019 at 72%. It has been dropping slowly since then until September 2020, when it stated to increase. Since January 2021 BTC.D is going down again and now it is at 55%.

For a altseason usually we want this:

Where do we go from here?

Looking at the 2017 BTC.D might increase at least one more time before we really enter an altseason.
BTC might have another run, when it will break 100k, and it this run it will increase its dominance, then it will go sideways and then alts will pump. There is a chance this process to repeat twice. Once it the summer, another time in the autumn.

As noted, the BTC.D chart is quite young with not a lot of past data so things can go very differently then the above possible options presented.

Ethereum has a special role in the crypto markets and has been acting as the flagship of the alts. When the bitcoin dominance is going down, the biggest reason is Ethereum. In the past bull run Ethereum was very close to the BTC market capitalization on two occasions.

At the moment of writing this BTC has 1.1T in market cap, and ETH 247B, or ¼ of the bitcoin market cap. This is a low ETH to BTC capitalization. When ETH is at least half of the BTC market cap we can say that is an altseason territory.

In terms of price, BTC is now at 60k, x3 its previous high, while ETH is just slightly above of its previous ATH of 1.8k. For ETH to match BTC performance it needs to be somewhere around 5k.

But this time around we might include some other tokens under the Ethereum category for example BSC, ADA, DOT. BSC and ADA especially had quite a run, going x10 in the last few months. If we include them in this category, we will get somewhere around 400B in market cap at the moment. Close to the ½ of BTC market cap, but not there yet.

How about the other top coins? Here is a chart. 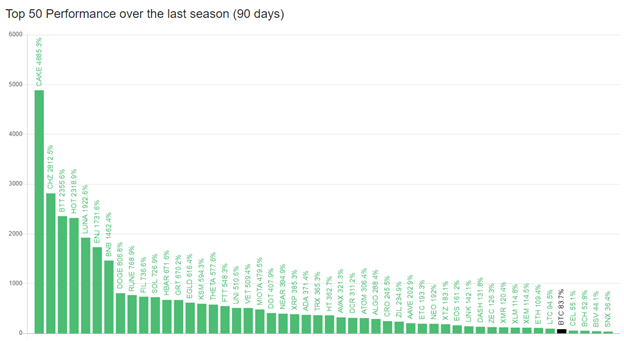 If we look at this metric most of the top coins have outperformed Bitcoin in the last 90 days. Only four coins have not done that yet. Usually when more than half of the coins outperform BTC we can say we are in alt-season. By this metric we are already in altseason.

Overall, what can be said from the above is that with a bitcoin dominance at 55%, we still have some more room for alts.

Ethereum as the alts flagship, has been lagging behind Bitcoin and its only just above its previous all time high, while bitcoin is x3. The other tokens that are competing with Ethereum like BSC and ADA have done a nice job and have went x10 in the previous months. Even if we add their market cap on top of Ethereum the ETH to BTC capitalization is still low.

Most of the other top 50 tokens have already outperformed Bitcoin in the last 90 days.

My personal opinion is that we still have some room to go in this market, at least till end of the summer, or in the positive scenario till the end of the year. Bitcoin should hit 100k in the year and we will see alts go higher. This of course can be totally wrong, and the market can do its thing. Everyone should act to his believes and comfort zone, and don’t invest more than you can afford to lose 😊. One thing is sure, playing the long game is always a winning bet, so if you have at least five years patience and hodl you tokens you will most likely be in green 😊.

P.S. When I look at the Bitcoin monthly chart, I’m scared, but then I look the yearly one and feel better 😊. 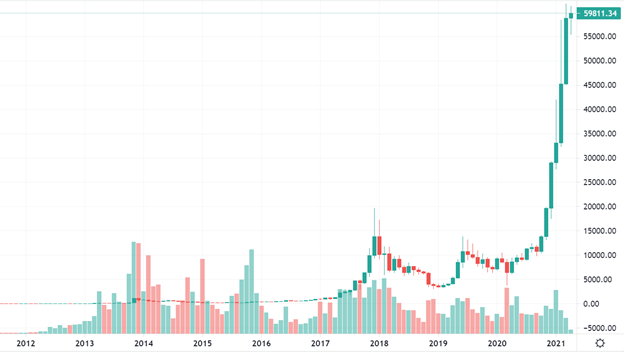 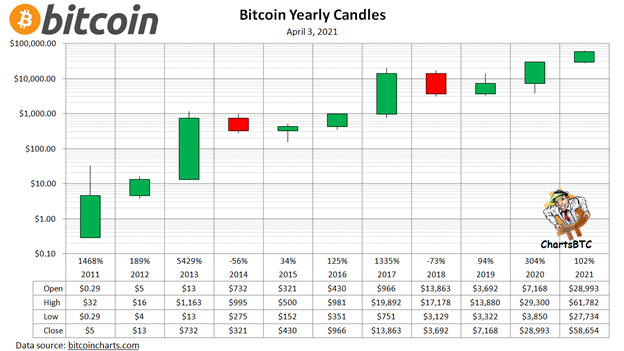 That las yearly candle needs to go up a bit more to match the previous cycles in 2013 and 2017.