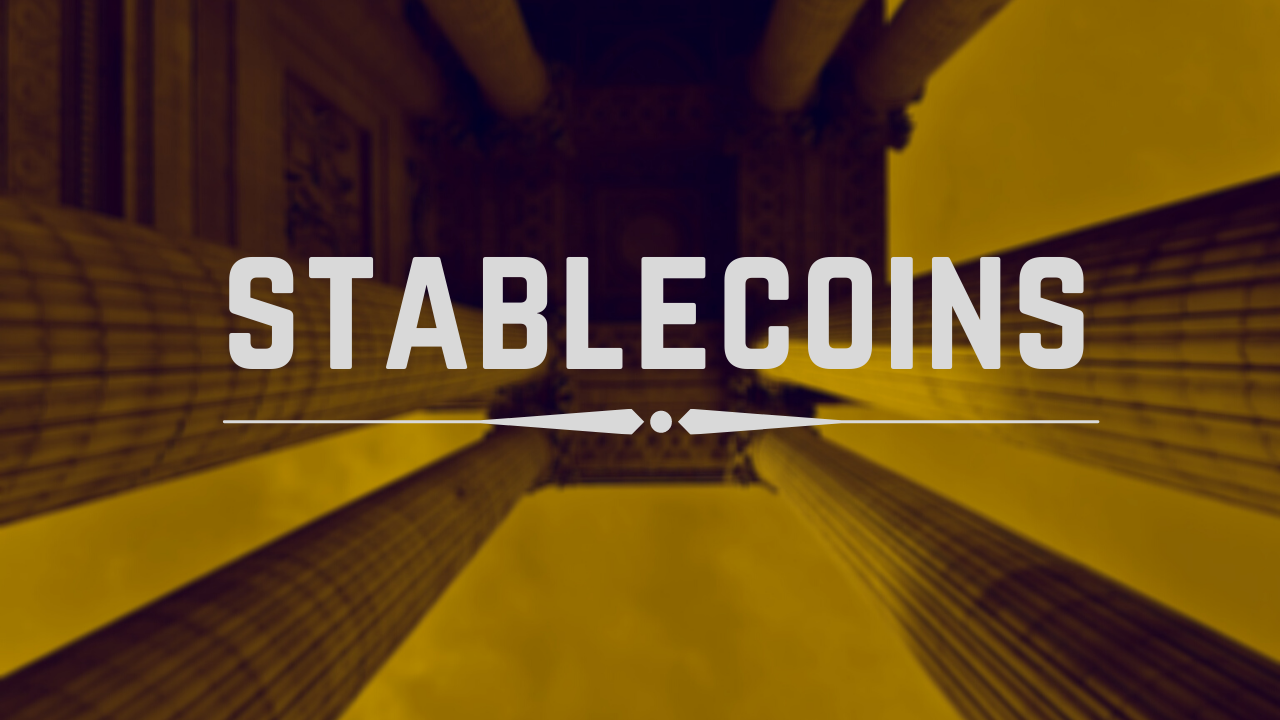 Here is the chart for the stablecoins market cap. 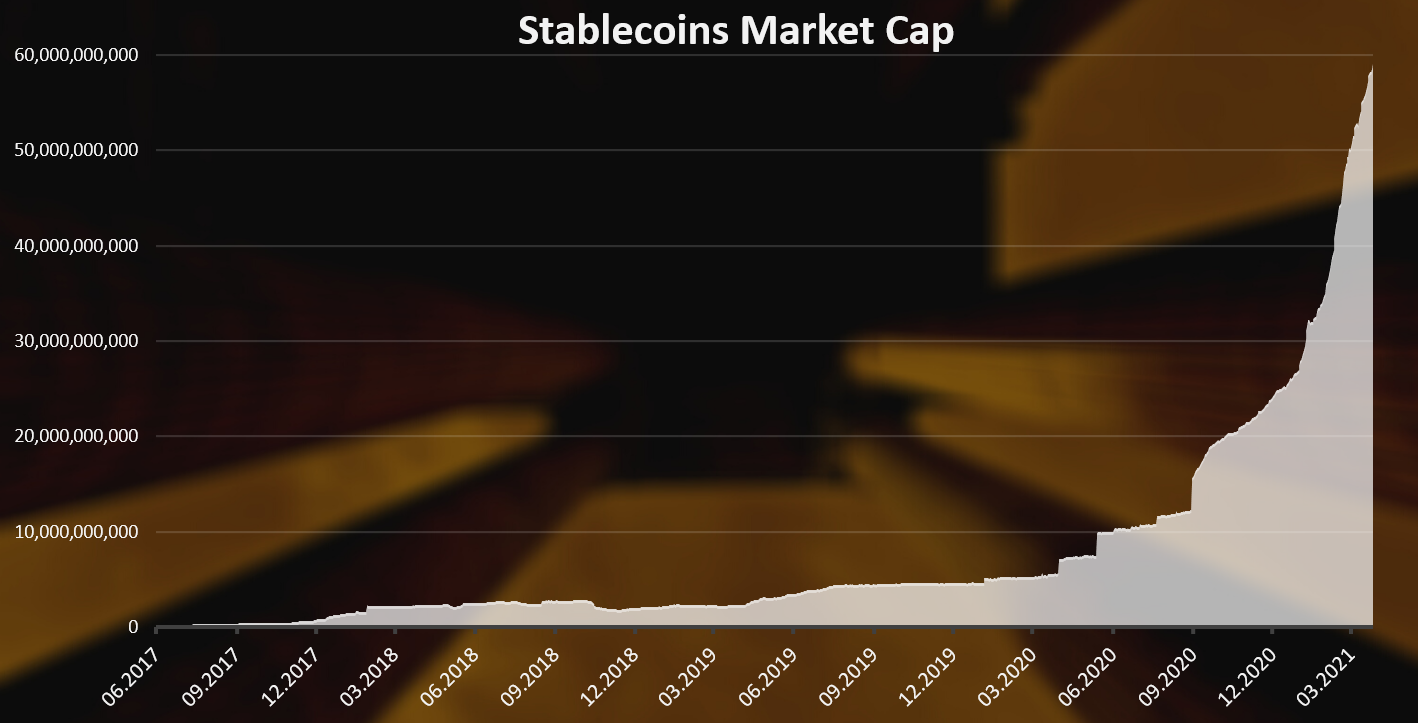 The chat above includes the stablecoins from the previous list. There are some others but these consist 99% of the market cap.

This is quite the chart. The market cap of stablecoins has literally went vertical reaching 60 billions at the moment of writing this. There is huge growth in the last six months.

When we put the chart above on a yearly basis we got this. 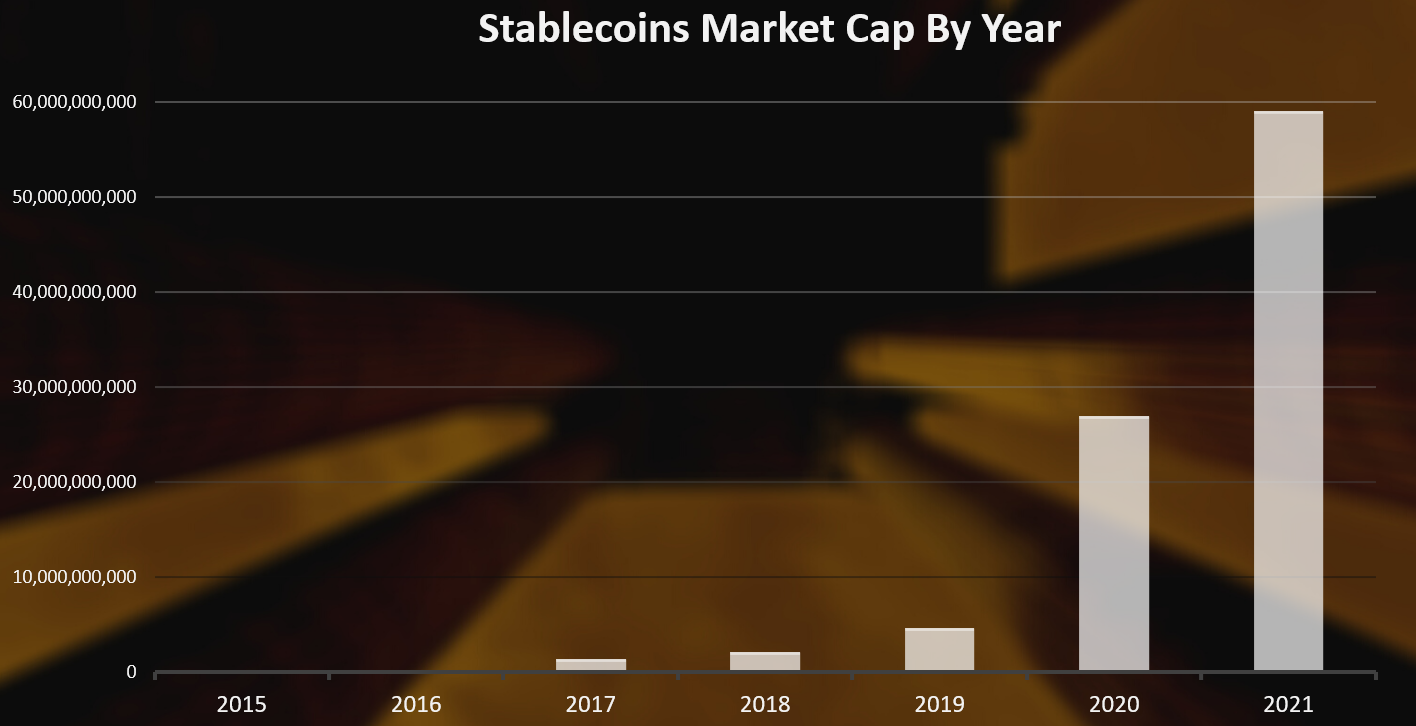 The market cap is for the end of the year.

Here is the historical marketcap for Tether 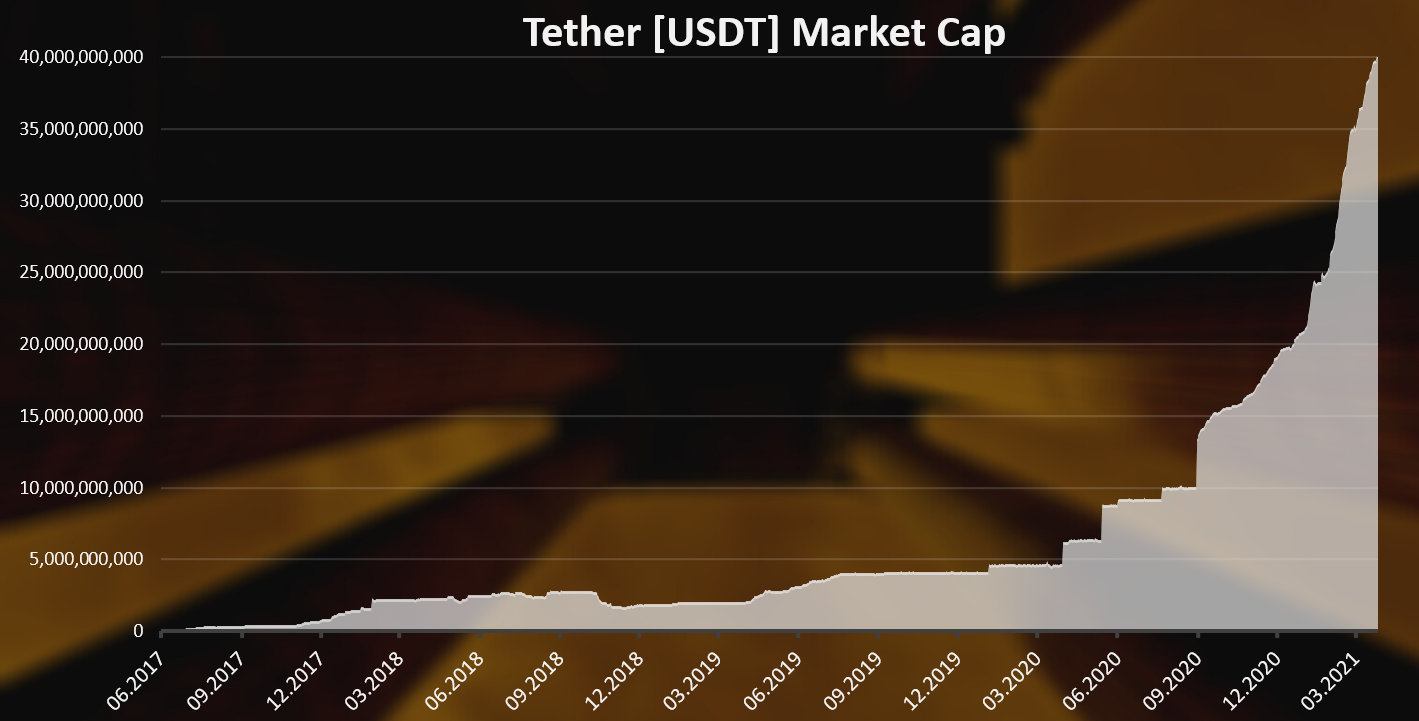 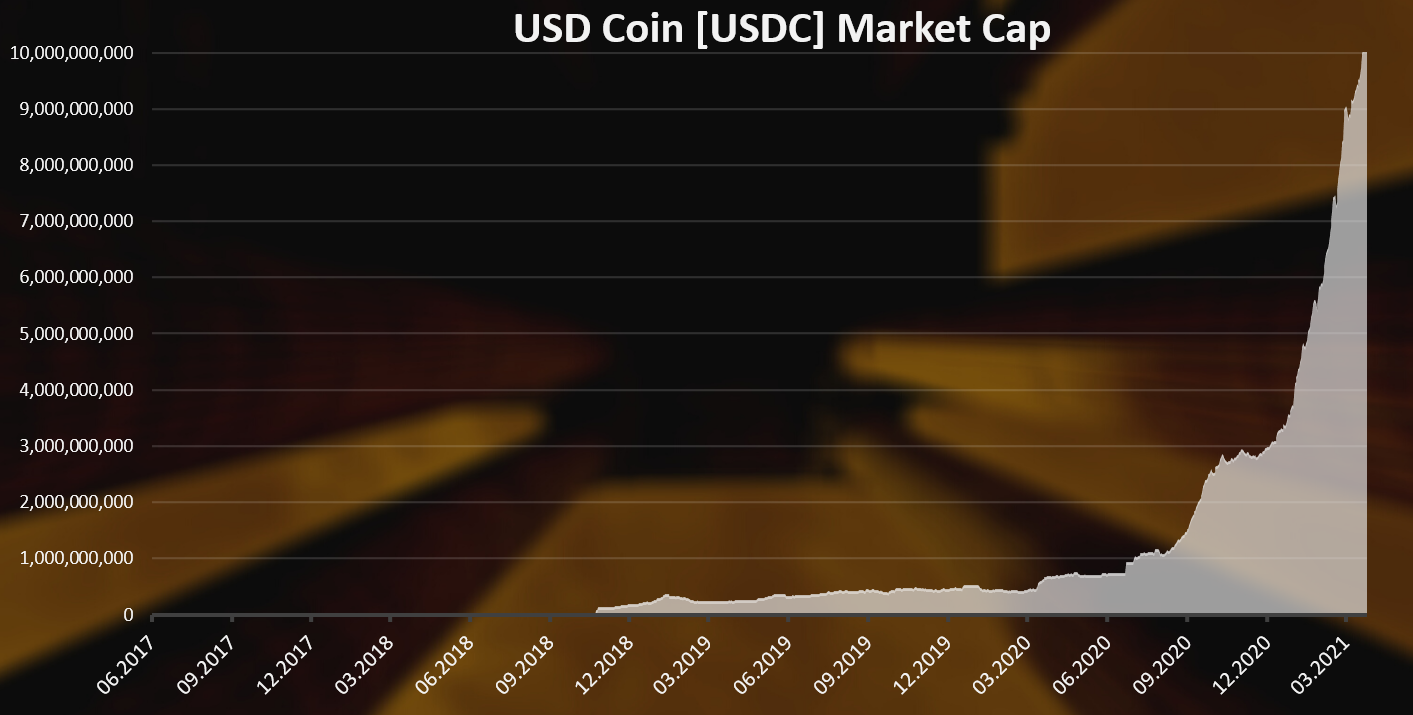 USDC started its journey at the end of 2018. Same as USDT, a lot of USDC has been printed in 2020 and in the first months of 2021.
The marketcap for USDC at the moment stands at 10B, quarter from the one of Tether.

USDC has enjoyed a better reputation in the crypto industry for now.

DAI is the decentralized version for stablecoin. Its run as a smart contract on Ethereum. Everyone can use the MakerDAO protocol, deposit collateral and generate DAI as a loan. 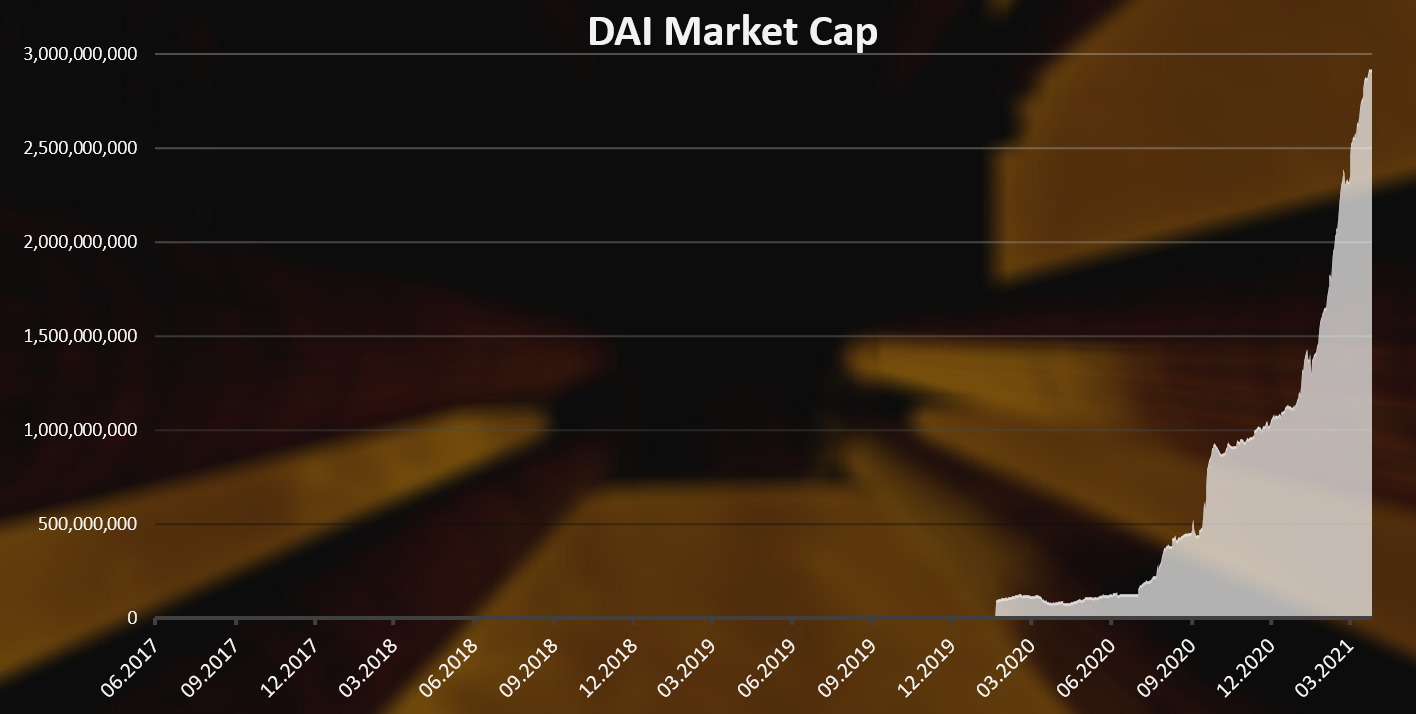 We can see that the DAI marketcap has grow a lot as well. At the moment DAI has around 3B in marketcap.

Unlike the USDT and USDC, all DAI is generated in a decentralized manner with collateral locked in a smart contract. The average ratio of the collateral is somewhere 3:1. So for 1B DAI there is an approximate 3B collateral. No fractional reserve policy here 😊.

The Binance exchange stablecoin. Its mostly used on Binance and BSC as well as a trading pair against other cryptos. 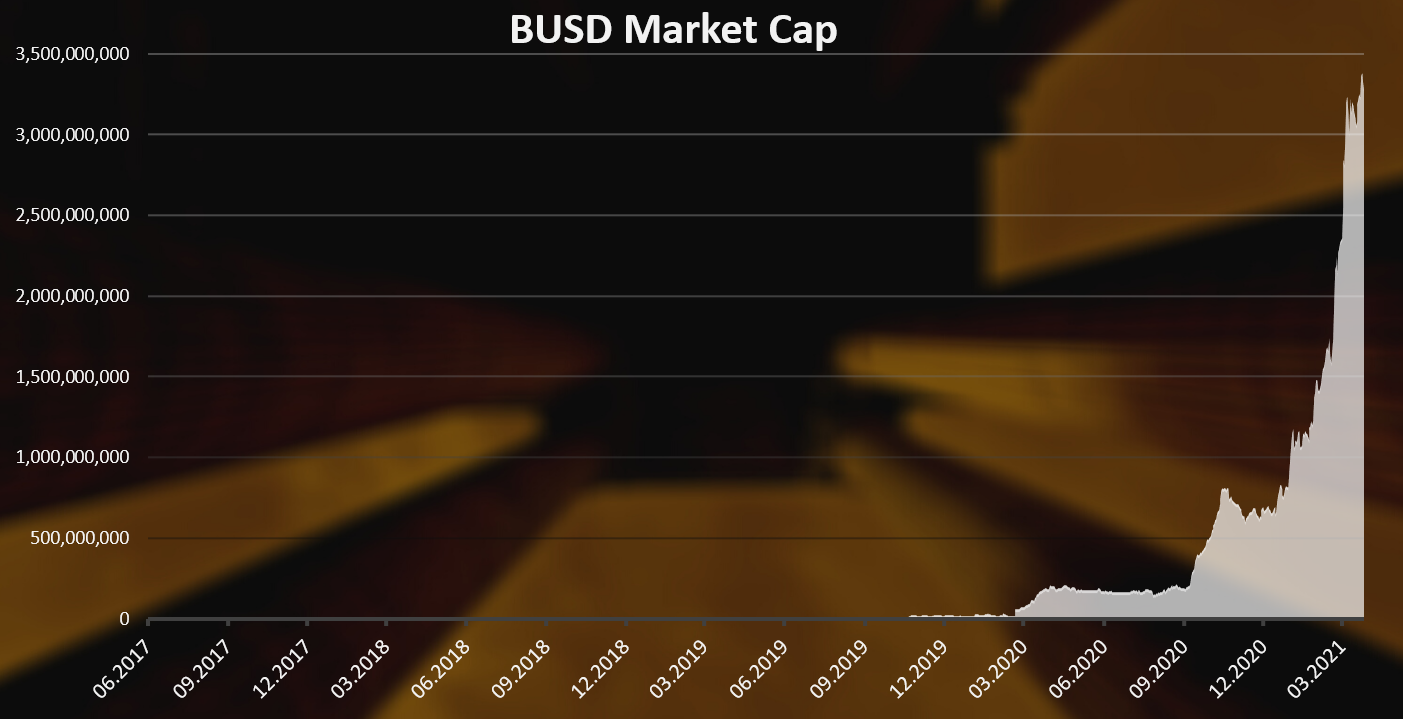 Again, here we are seeing a sharp increase in supply for BUSD in the last period. BUSD has overtaken DAI in terms of market cap just by a fraction. It also has around 3B MC at the moment.

As far as for security goes this is a quote from the official web.

 Binance USD (BUSD) is a 1:1 USD-backed stable coin issued by Binance (in partnership with Paxos), Approved and regulated by the New York State Department of Financial Services (NYDFS), The BUSD Monthly Audit Report can be viewed from the official website.

Here is the chart for the latest market cap of the top stablecoins. 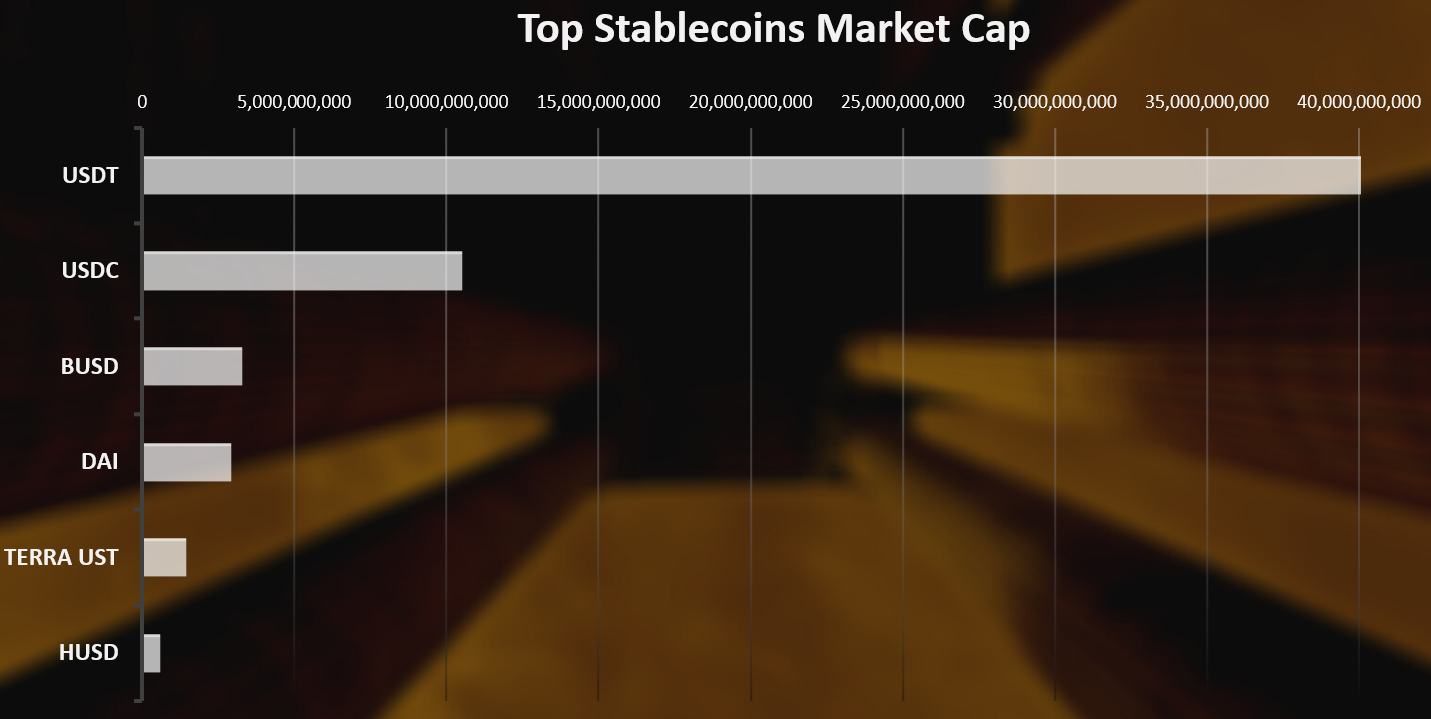 As we can see Tether USDT is still dominating the stablecoins arena, with 40B marketcap out of the total 60B. A 66% dominance. USDC is on the second spot with 10B, then come BUSD and DAI with a very similar market cap of 3B.
Terra UST has around 1.4B, but it should be noted that it has grown very fast in the last few months, and then the Huobi stablecoin HUSD with 600M.

What stablecoin are you using?