The Haircut Rule, The Biggest Risk For The HBD Price | Historical Data On Hive Debt and HBD Price

The native Hive stablecoin HBD has been on a move in 2021 with some significant improvements that lead to better economics. First the @hbdstablizer started operating in February 2021, a full year now, and it has been on the front row in maintaining the HBD peg. The DHF budget also significantly increased in the last year, going from 1M to more than 12M HBD now. This bigger budget allowed for bigger daily payments, ergo more liquidity for HBD on the internal market. Furthermore, with the HardFork in the summer of 2021 a HIVE to HBD conversions was enabled, meaning that HBD <-> HIVE conversions are now possible in both ways. Another great thing is that HBD now has a 12% APR for HBD kept in the savings wallet.

With all this improvements and push for HBD stabilization, adoption and expansions it’s time to take a look at probably the biggest risk for HBD and that is the haircut rule. 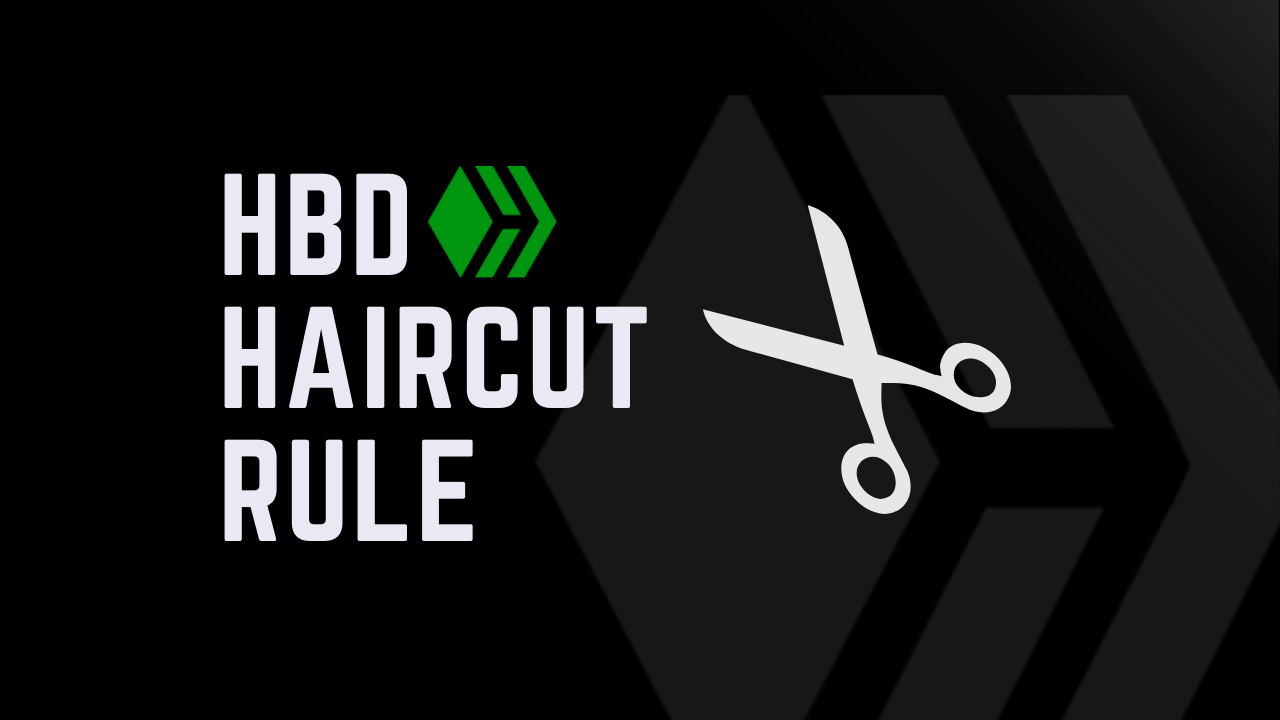 What Is The Haircut Rule?

Hive Backed Dollars, as the name suggest are backed by HIVE. What this means is that each HBD can be converted for one dollar worth of HIVE through on chain conversions where HBD is destroyed and HIVE is created. The blockchain guaranties a HBD at one-dollar thorough HIVE. No matter what the price of HBD on the external markets is, when a conversion is made on the blockchain from HBD to HIVE, the returned HIVE will be valued at $1 per HBD. This conversion lasts for 3.5 days and an average price of HIVE is taken for the period.
Since HBD is backed by HIVE, HBD acts as debt of the blockchain.

The debt is calculated in the following manner:

The haircut happens when the debt of the blockchain is higher than the predetermined limit by the blockchain. At the moment this limit is set at 10%.

Just for clarity, we have two set of prices for HBD. The first is the usual market price that is determine on crypto exchanges and aggregated by some of the aggregators like Coinmakretcap or Coingecko. The second one, the one we are interest in here is the HBD price that is guarantied by the blockchain through HIVE conversions. Usually, this price is always at $1, but when the Haircut happens this price drops.

The period that we will be looking at is from March 2016 till January 2022. I have added the period for the previous version of Hive, called Steem (before March 21, 2020), in order to get a longer data frame.

To be able to get the market cap for the purpose for the debt calculation we need the virtual supply. The virtual supply is the sum of the regular tokens plus the HBD converted to HIVE at the current feed price. The aggregators provide data for the market cap, but usually it is not calculated in the manner described above. 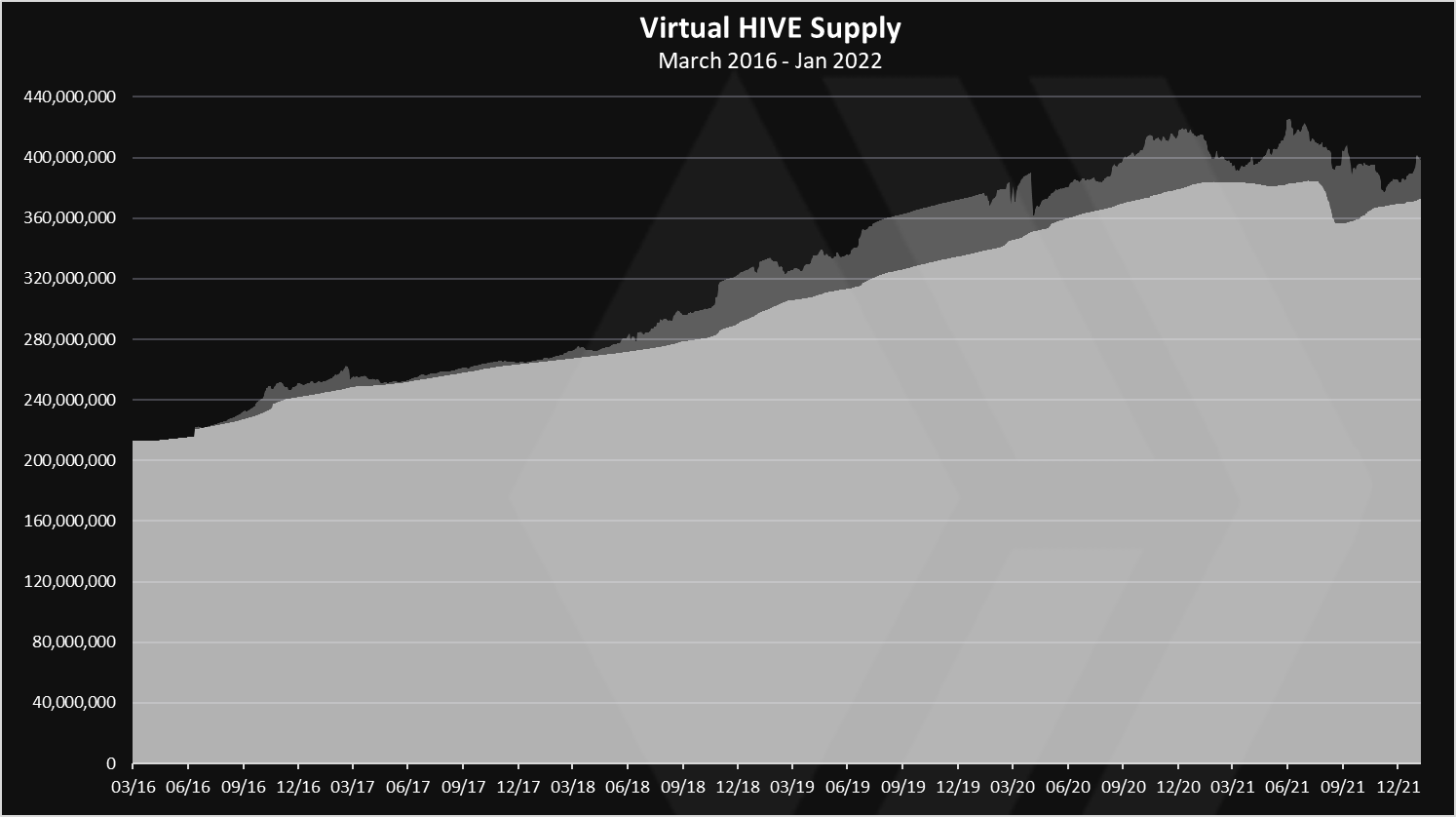 The light color on the top is the added supply from HBD converted to HIVE. We can see that the supply has grown slowly since the inception. In the last year there has been a drop in the supply.

After we get the supply in a form that we need for the purpose of debt calculation, we need the price.
Here is the chart. 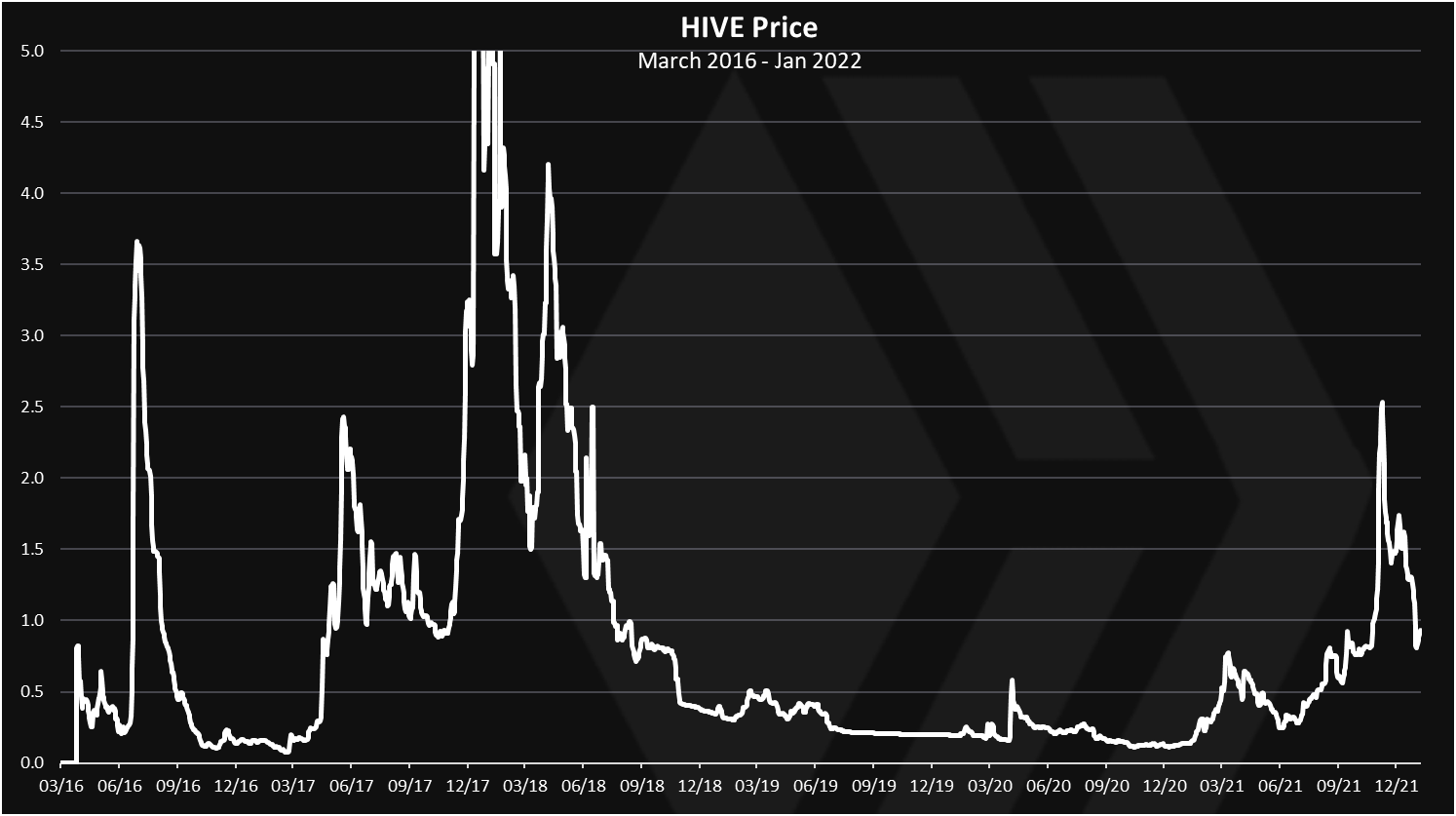 Quite the ride for the HIVE price.

The next step is to calculate the market cap for the purpose of the debt by multiplying the virtual HIVE supply and the price. Here is the chart. 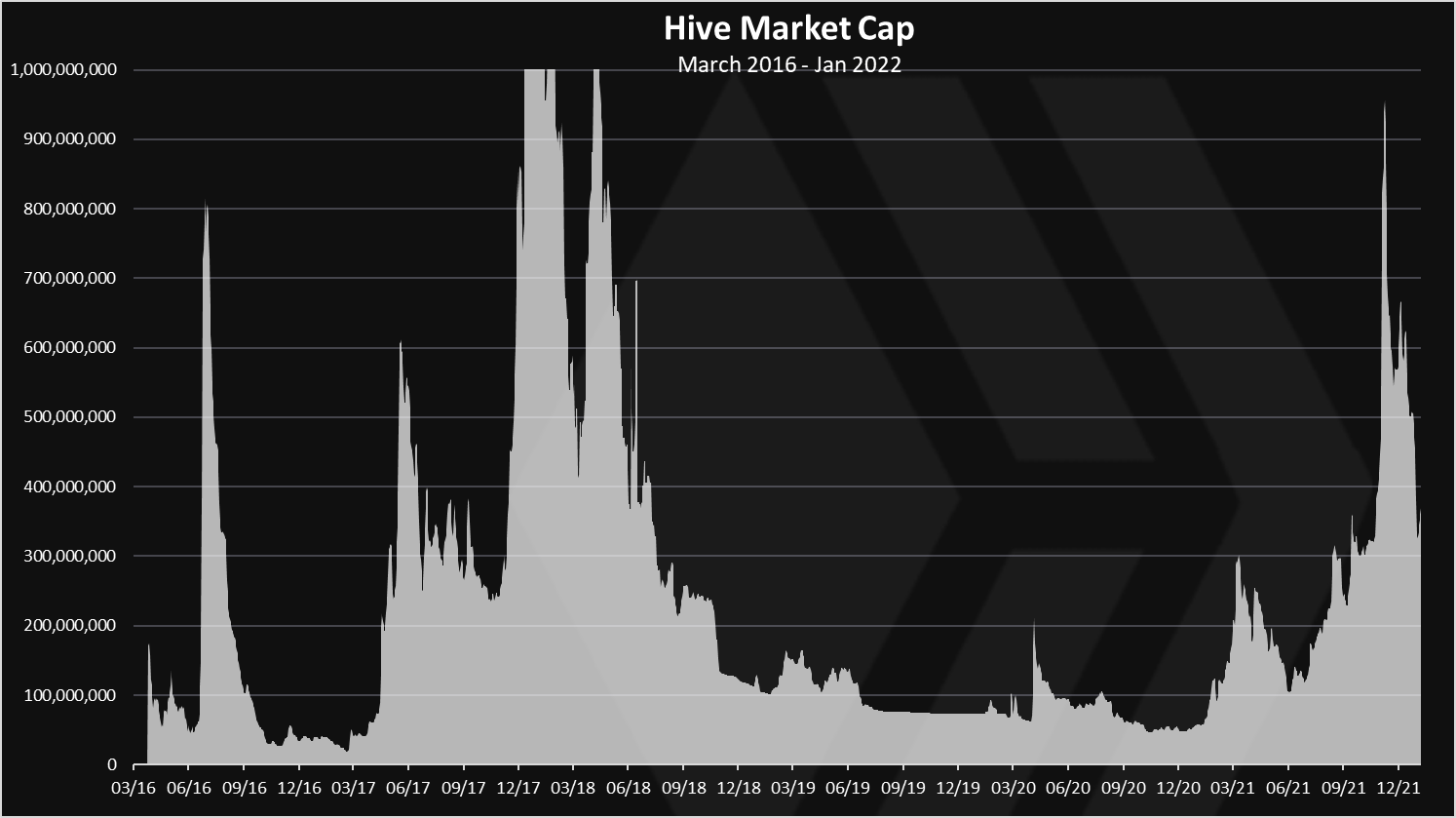 A very similar chart as the price chart.

One more thing for the debt calculation and that is the HBD supply. 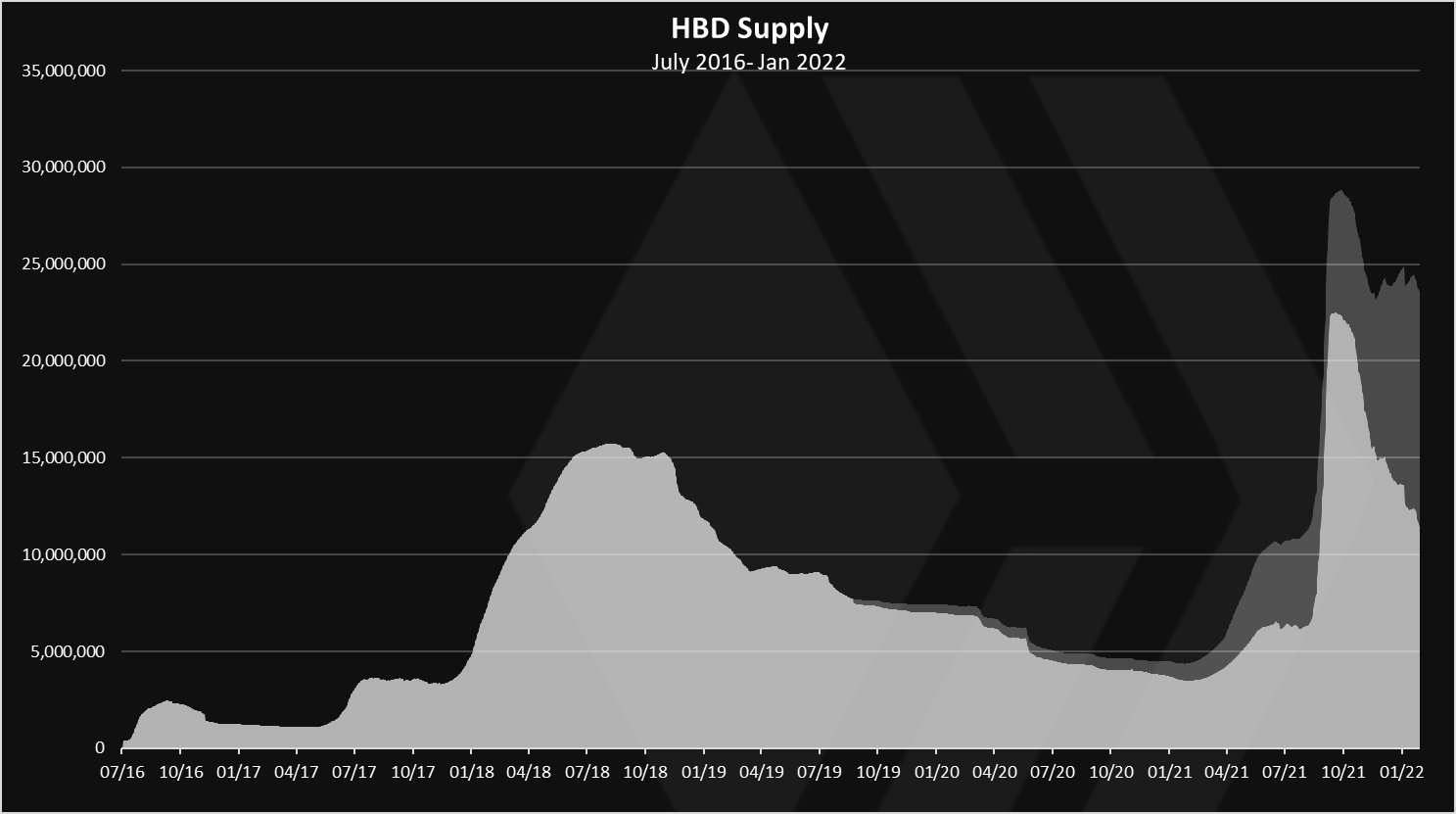 The HBD that is taken for the debt calculation doesn’t include the HBD in the DHF. The HBD in the DHF is shown above in the light color.
We can notice the increase in the HBD supply in 2018, when at the peak in August 2018, the supply was around 16M HBD. Then a slow decline in the supply, a conversions to HIVE up until March 2021 when the HBD supply started growing again. A massive increase happened at the end of August 2021 to a new record high of 23M HBD, and a slow decline since then to around 11M HBD now.

Finally, the debt calculated as: DEBT = HBD in circulation / HIVE Market Cap.
Here is the chart. 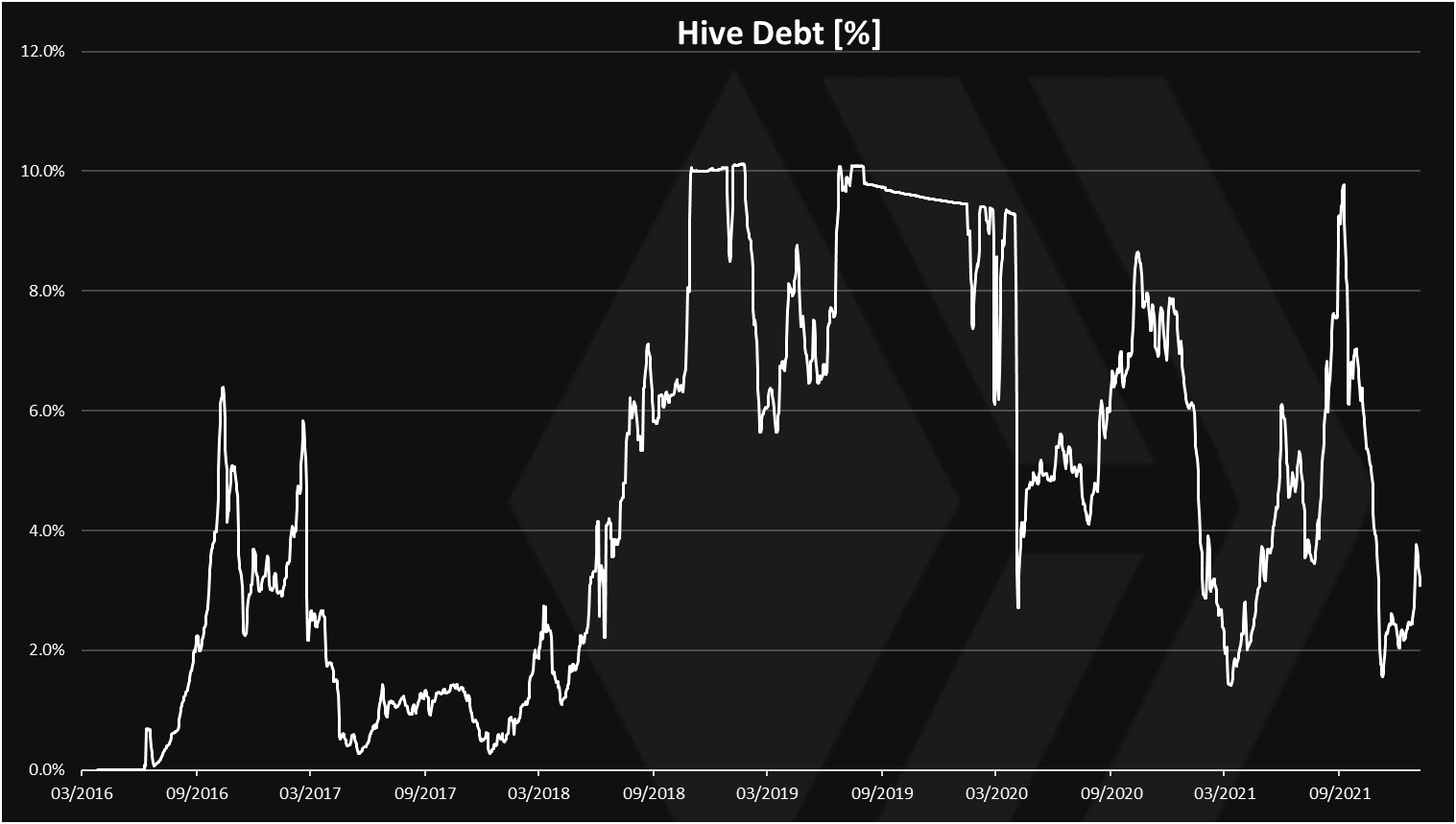 Quite the ride for the Hive debt! In short it has been small but volatile.

In the first two years of operation, 2016 and 2017, the debt was low and never reached the 10% limit. The maximum that it has reached was around 6%.
Then in 2018 the debt reached the limit of 10%, after the massive increase in price at the end of 2017 and the begging of 2018. The increase in debt happened especially in the second half of 2018 when the prices dropped a lot, and there was a lot of HBD (SBD) printed around. This high debt lasted from October 2018 up until March 2020, or around year and a half.
In the last year there was a short period when the debt closed in to the 10% level, but for a very short time.

When we plot the debt against the HBD supply we get this. 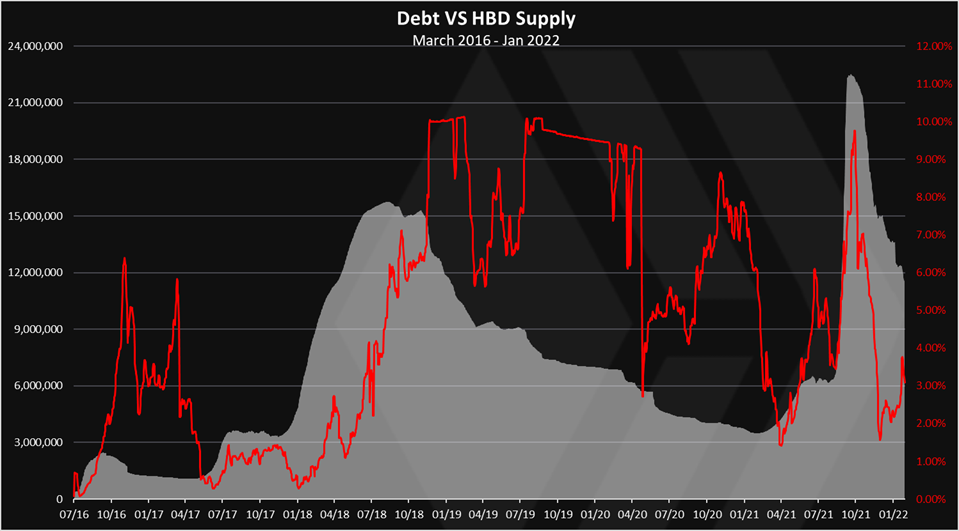 At the end the important things. The HBD price that the blockchain offers.
When we plot the HBD blockchain price VS the debt we get this. 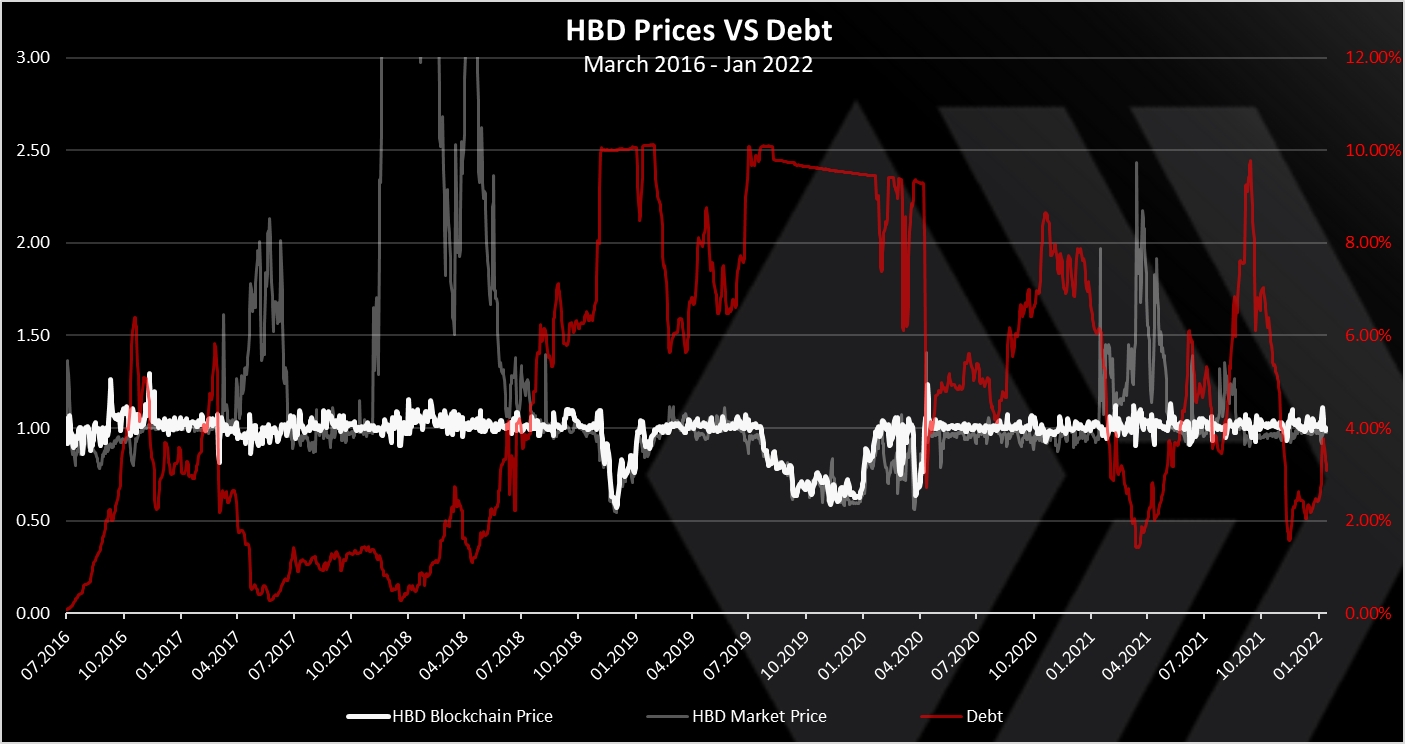 We have the HBD price guarantied from the blockchain (bold white) and the HBD price on the open market (grey) in the chart. The debt in red is also represented on a different axis.

We can see that the HBD price drops has happened in the periods when the debt was on the upper limit.

If we zoom in the period when the HBD price was bellow the peg we get this. 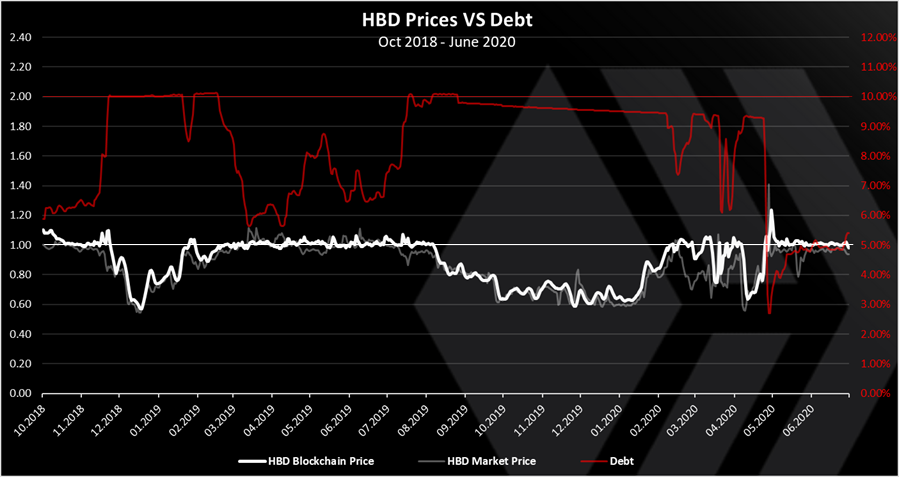 Here we can see a better representation how things went.

For the first time the debt increased by a lot in November 2018, when the price of HBD dropped to around $0.6. The drop of the HBD price has been corelated both on the blockchain and on the external markets. This situation lasted for about four months and in March 2019 the HBD price was back at its peg.

Later in 2019 the debt increased again and the HBD price stared losing its peg again. This time the peg dropped more gradually and reached a low of around $0.6 again in January 2020, when a sharp recovery happened. Another short drop in the HBD price happened in May 2020, that lasted for a week. Since then, HBD has been on the peg, at least from the blockchain perspective, for an almost two years.

Disclaimer: I had some issues collecting and scraping data especially about the HIVE feed price and the HBD price from the blockchain. There is simple no easy way to get this data. Hivesql from @arcange doesn’t record this type of data. Would be great if it happens in the future 😊. Because of this, please take the data like indicative and not a 100% accurate.

I also found some illogical things, like the HBD price from the blockchain at $0.6 under conditions when the debt is just above the 10%. For a HBD price at $0.6 the blockchain debt should be around 16.6%. Probably I’m missing something.

From the presented we can conclude that HBD (former SBD) had dropped below its peg in the past when the debt was high. The drop happened on both, HBD market price and the HBD blockchain price when making conversions. The drops in price was at the lowest at $0.6. The periods when this happened lasted from one week to a max of six months.

In the last two years the HBD price offered by the blockchain didn’t went under the peg. On short intervals there was drops in the market price but those were arbitraged, and the price went back again. Remember if the price of HBD on the open market is lower than $1, its better to use the conversion option and convert HBD to HIVE for a $1.

Debt limit increase
10% is a very small debt level. It means that the collateral is a 1 to 10 ratio. This type of low debt levels are ok for a new projects that haven’t matured and are very experimental. But this blockchain and tech has been around for more then six years now and it has been tested in the period. Some things didn’t worked and were improved, and there is a room for more improvement. If the market cap of HIVE was in the top 50, I would say a 50% debt is perfectly fine. But since we are still in the middle sized projects with a market cap around 0.5B and position somewhere between 150 to 200, a 30% debt is probably a more careful approach.

In the next Hardfork the debt limit will be increased to a range between 20% to 30%. This should give HBD holders more security in the HBD value and should probably increase the overall HBD supply. For example, at the current market cap, a 30% debt will be a HBD supply more then 100M HBD, while at the moment it is around 11M. A 10x opportunity for growth without increasing the market cap of HIVE. The thing is HBD can come only from HIVE and more HBD created will push the price of HIVE.