The stablecoins keeps growing and with that attract attention of regulators. There was a recent proposal for a bill that should sort of “ban” some type of stablecoins.
Regulators and central banks don’t want to have competition in the issuing new dollars 😊.

A lot of things are up to debate when it comes to stablecoins and how some of the most popular are acting but will left that one here. What we will be looking at is how the top stablecoins has been growing and is there any significant changes. 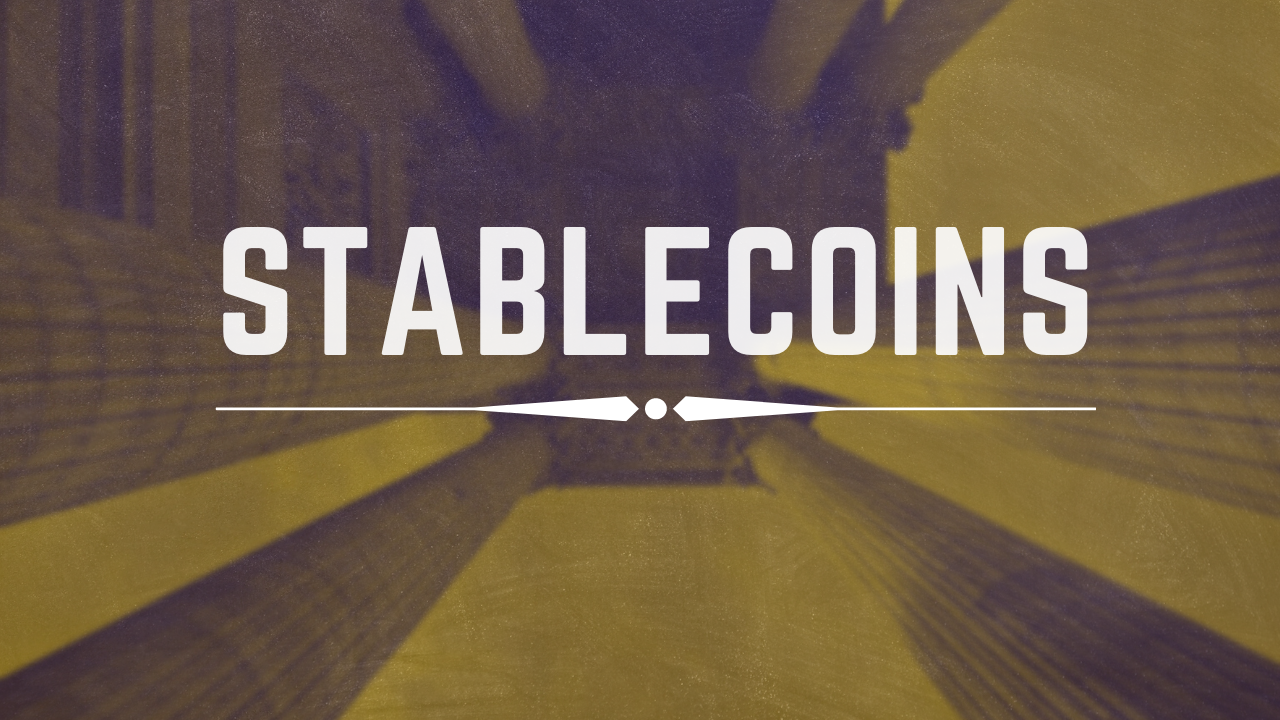 The basic function of these tokens is to keep a peg to a fiat currency, in most cases USD. To do this usually an equal amount of money deposited in a bank is need for each token minted as a fiat collateral. Tokens like DAI are backed by crypto collateral usually overcollateralized. Tokens like UST and HBD are convertible to their main crypto pair, LUNA and HIVE for a one dollar value.

There is a few more out there but we will focus on these as the biggest ones in market cap. Tether has been growing more aggressively in the first half of 2021 and reached 60B in the June. After that it stopped for a while and even decreased around August. This is basically in the period of the correction and the China ban on miners. After August the Tether market cap slowly increased and now is at around 75B. 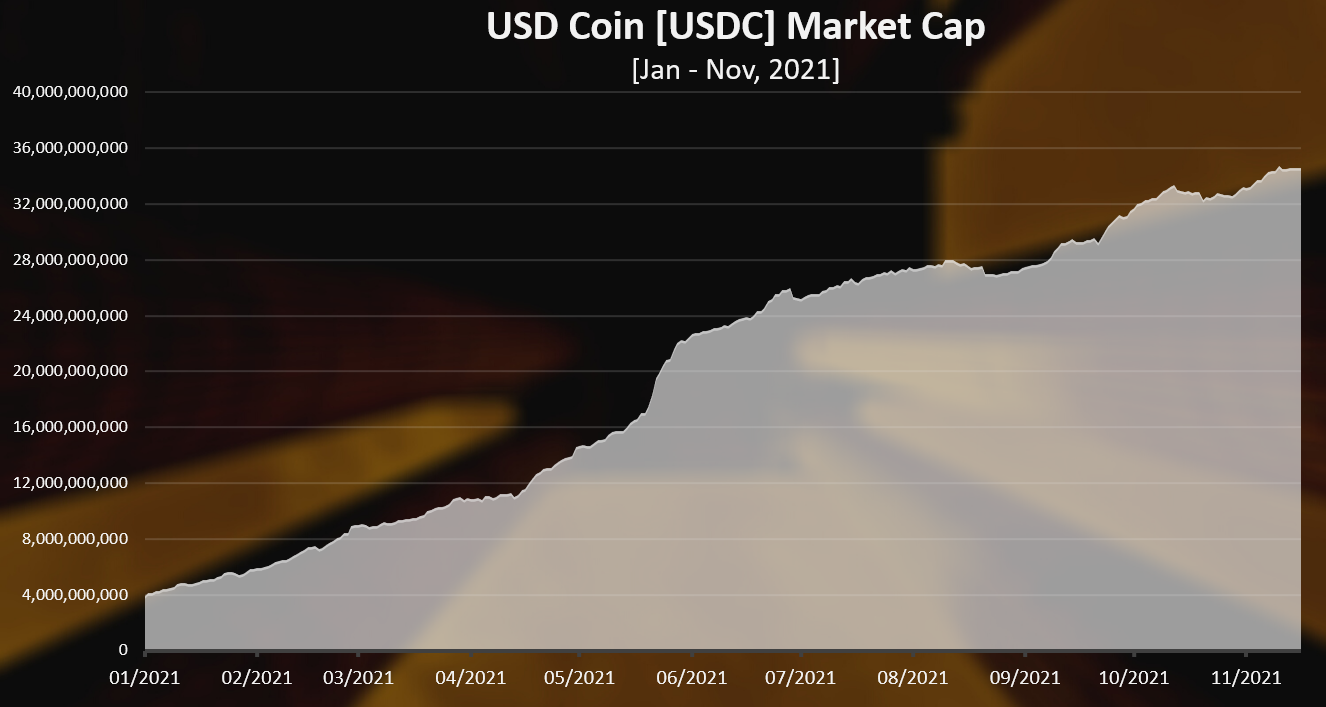 USDC has seen a massive growth in 2021 as well. At the begging of the year the market cap of USDC was around 4B and now it is around 34B. It is a more than eight times increase in market cap size.
We can notice a similar trend as for Tether, a fast growth in the first half, slow down in the summer during the market correction and an increase in the last few months.

The Binance exchange stablecoin. It’s mostly used on Binance and BSC as well as a trading pair against other cryptos. 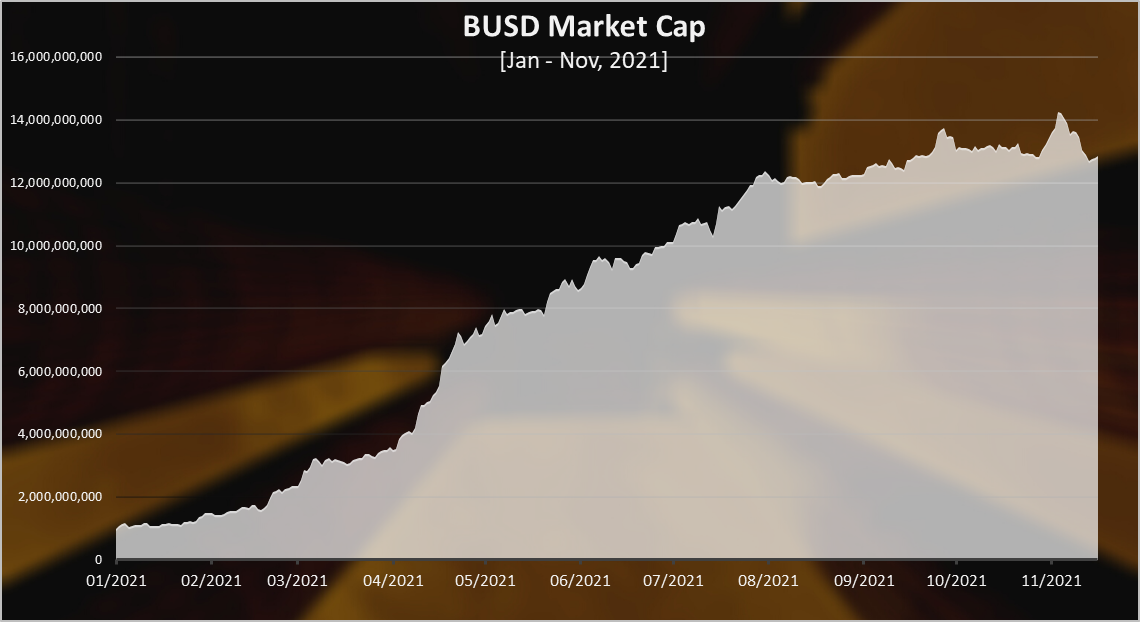 BUSD has been growing very fast in the first half of the year, and then a slower trend in the last period. At the beginning of the year, BUSD had just over one billion market cap and now it stands at around 13B in market cap.

DAI is the decentralized version for stablecoin. It runs as a smart contract on Ethereum. Everyone can use the MakerDAO protocol, deposit collateral and generate DAI as a loan. DAI started later than USDT or USDC. The current version of DAI (multilateral) stared in January 2020. From what we know there was a previous version of DAI, a single collateral one, that started at the end of 2017.

DAI has seen a continues growth during the whole 2021, with even higher growth in the second half of the year, unlike the previous dollar collateralized stable coins. DAI started the year with around 1B and now is almost 8B in market cap.

Unlike the USDT, USDC, BUSD, all DAI is generated in a decentralized manner with collateral locked in a smart contract. The average ratio of the collateral is somewhere 3:1. So for 1B DAI there is an approximate 3B collateral. No fractional reserve policy here 😊.

The holders of the governance token Maker, are deciding on the cap of the DAI issued.

The Terra stablecoin UST has seen some interesting development in the last year. It is another crypto backed stablecoin, the closest competitor to DAI. Unlike DAI it works in a different manner, without collateral, but with UST convertible to LUNA, the main token of the platform. Similar to HIVE and HBD. This method for stablecoins in theory is much more capital efficient then the overcollateralization that DAI uses. 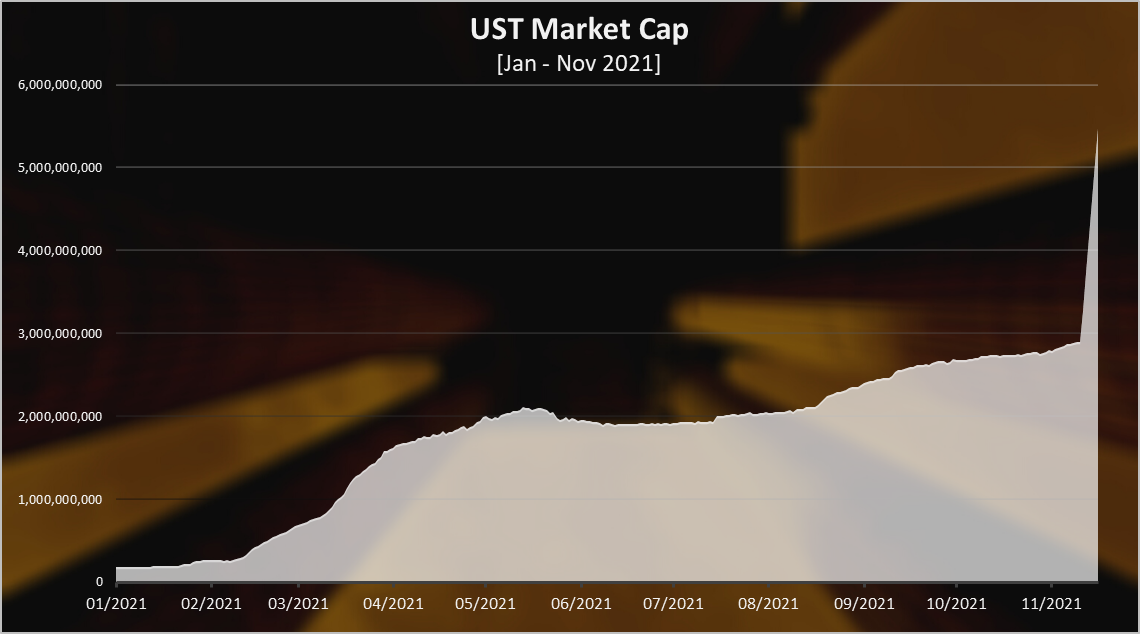 2021 was year in which UST established itself as a reliable stablecoin. It is the new boy in the stablecoins arena. The year started with a few hundred in market cap and now it is more than 5 billion.

What is interesting there has been a massive increase in the market cap in the last few days with billions of UST added to the market. Not sure what is happening here.

Here is the chart for the total stablecoins market cap in 2021. 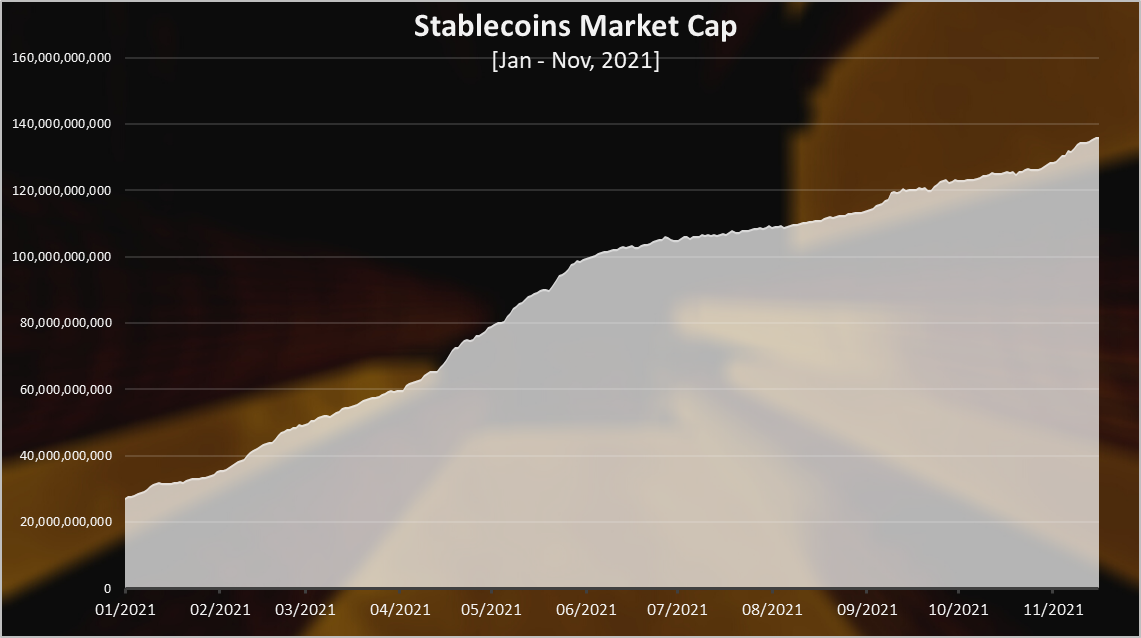 The chat above includes the stablecoins from the previous list. There are some others but these consist 99% of the market cap.

The overall market cap for stablecoins has gowned from 27 billions at the begging of the year to 136 billions at the moment. More than 100 billion added in a less then a year.

No wonder stablecoins are no.1 on the regulatory list. The issuance of a stablecoin can cause a lot of regulatory problems, since the fed doesn’t want competition around 😊. Also in the long run corporation can overdue it, if left unchecked.

Here is the chart for the latest market cap of the top stablecoins. 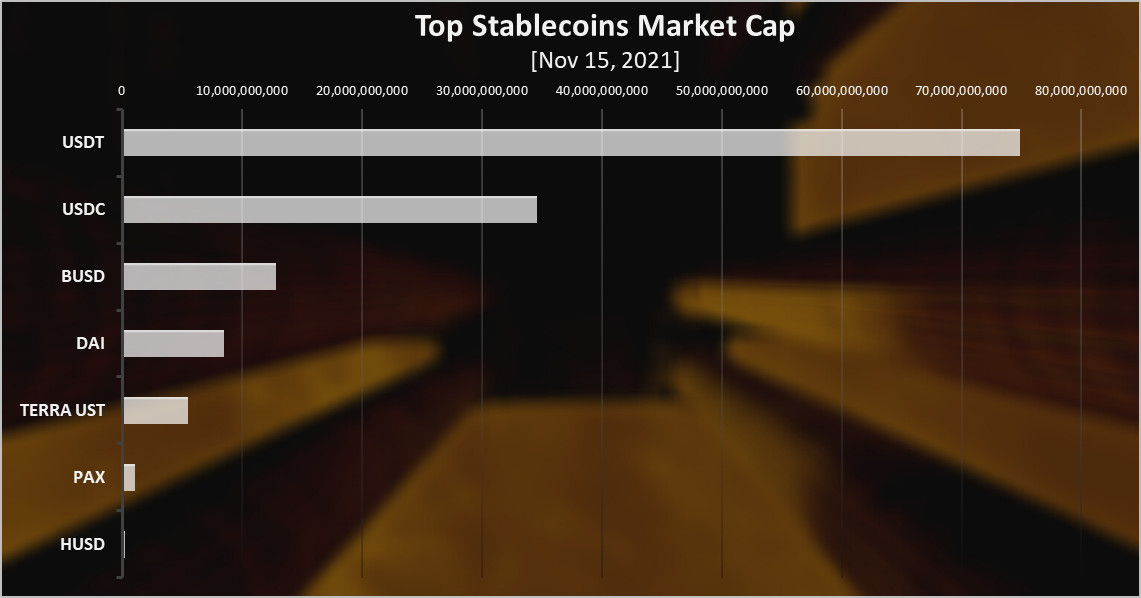 As we can see Tether USDT is still dominating the stablecoins arena, with 75B marketcap out of the total 136B. A 55% dominance. USDC is on the second spot with 34B (25%), then come BUSD, DAI and UST.

Overall, in 2021 stablecoins have grown massively. More than 100 billions rise in market cap. The general trend is a fast growth in the first half, a slow down in the summer during the correction and a slower increase in the last months. The crypto backed stablecoins DAI and UST are showing slightly different trend then the fiat backed, USDT, USDC and BUSD.

UST is the new contender in the stablecoins arena and it is challenging DAI for the no.1 crypto backed stablecoin.

Just for context the market cap of HBD at the moment is around 15 million, excluding the DHF supply. If we compare this to the billions for the top stablecoins, we can see the potential. UST works amazingly similar to HBD.

What stablecoin are you using?

100 billion in less then a year, next to FED i think some hackers are very interested😬

Yea that to .... especialy in the defi yeild farma

I'm forced to use DAI as it is all that is available in Texas from Celsius for loans. Otherwise, I don't use stablecoins beyond HBD because of the ETH gas fees. As I cash out my HIVE rewards and interest earnings, I convert to HBD to avoid putting out more HIVE on the market.

If I do use another stablecoin, it is because I can load my Crypto.com Visa card directly with it. Currently, it is limited to PAX.

Interesting, so you can't load you card with HBD, is it easy to convert from HBD to PAX?

In my case, I would need to use Blocktrades to convert HBD to BTC, LTC, ETH, DOGE, or BCH to transfer to Crypto.com to top up my card directly.

Converting to PAX would be another conversion if I want to use a stablecoin. I may do this in a bear market to preserve value. Generally, I load my card with only what I need. My typical balance is between $20 and $30.

For me to cash out HBD, I prefer to use Dash or LTC. I can send Dash to Coinbase. I can send LTC to Crypto.com for topping up my debit card. I could use Doge or BCH. But, I don't care to use those cryptos for anything. I don't use ETH or BTC because of the transaction fees.

But, I generally convert HBD to Dash and cash out to my business checking account through Coinbase.

Very interesting the growth that the stable coins have had this year, but I am surprised by the aggressive growth of TerraUSD knowing that it uses a similar technology to Hive and HBD.

Do you think that someday HBD could be in this important list?

This post has been manually curated by @bala41288 from Indiaunited community. Join us on our Discord Server.

Just for context the market cap of HBD at the moment is around 15 million, excluding the DHF supply. If we compare this to the billions for the top stablecoins, we can see the potential.

Hive Backed Dollars is honestly the most underrated part of the Hive ecosystem.

We need to be doing all we can to put HBD into a position to compete with the stablecoins on your list.

FUD from governments going after collateralised stablecoins is stupid when we already have algorithmic solutions like UST and HBD.

Who says Hive can't take some of that market share with HBD?

Stable coins are fascinating and I am using BUSD, DAI and USDC, mostly BUSD on Cubfinance and using Dai to take profits.

And to think that it has an impact upon the price of HIVE.