This is a report for the top Hive earners by category for October 2020. 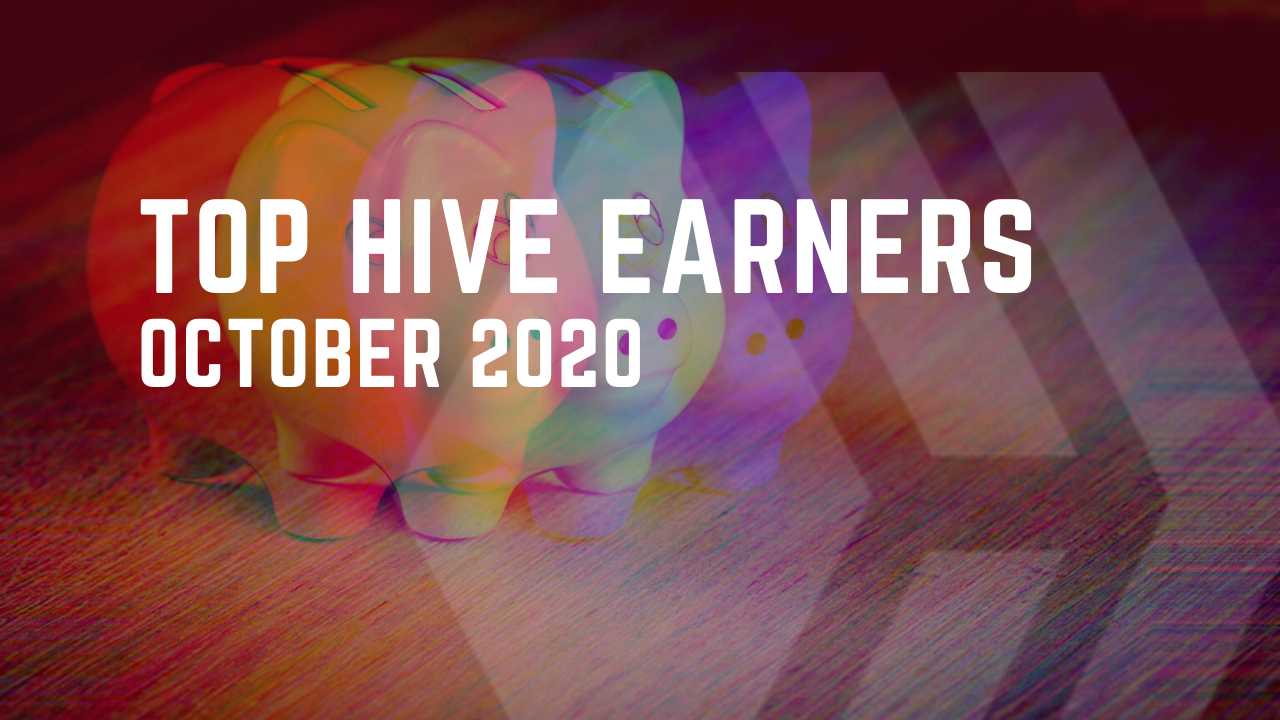 First let’s see the total amount of HIVE rewarded by date in the month.
Here is a chart. 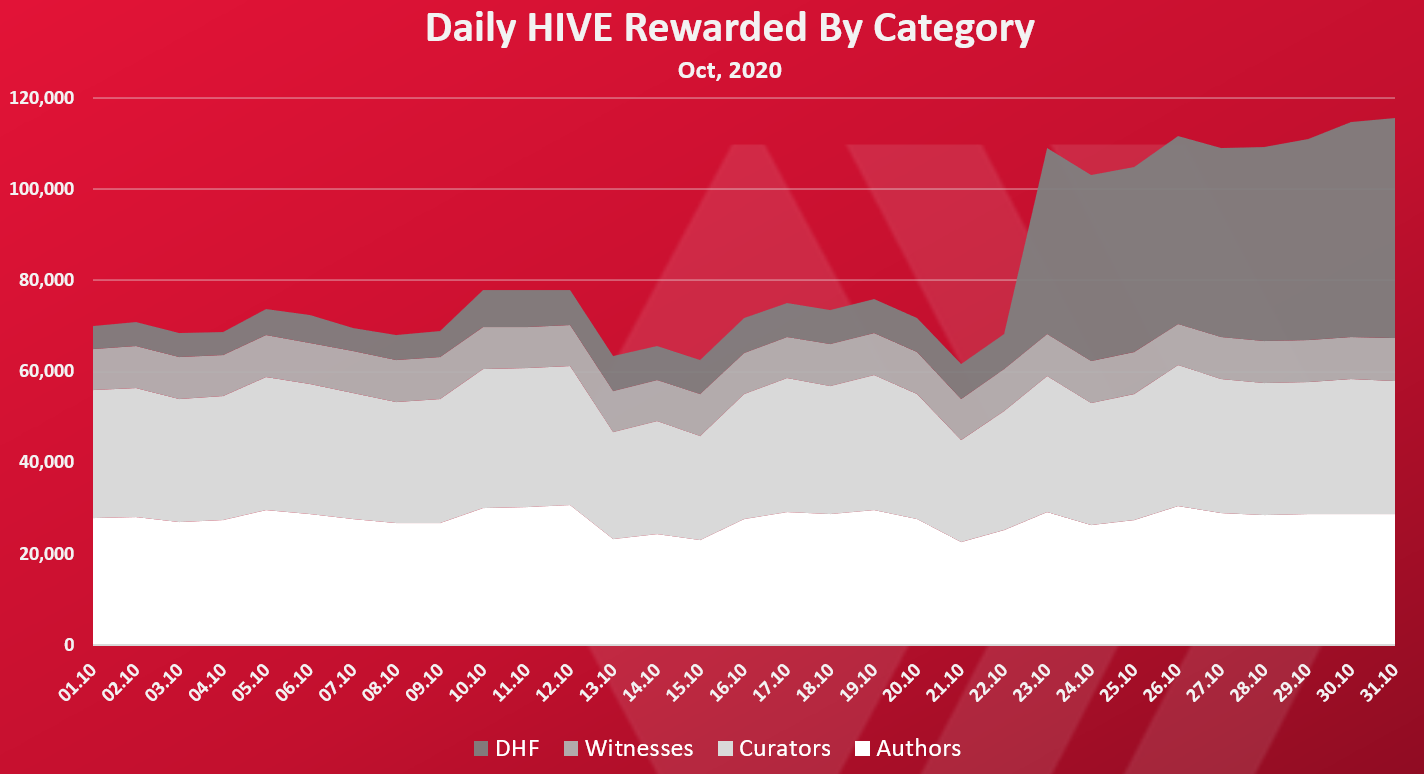 For comparison, all rewards have been converted to HIVE.

We can see a big spike in the rewards from DHF after October 23rd. This is because of the airdrop to accounts that were excluded by mistake when the HF first happened.

On a regular day, Hiver regards are around 70k per day, or more than 2M per month.

Next let’s take a look at the top earners for each category.

Here is the chart for the top 20 Hive authors that earned the most in October 2020. 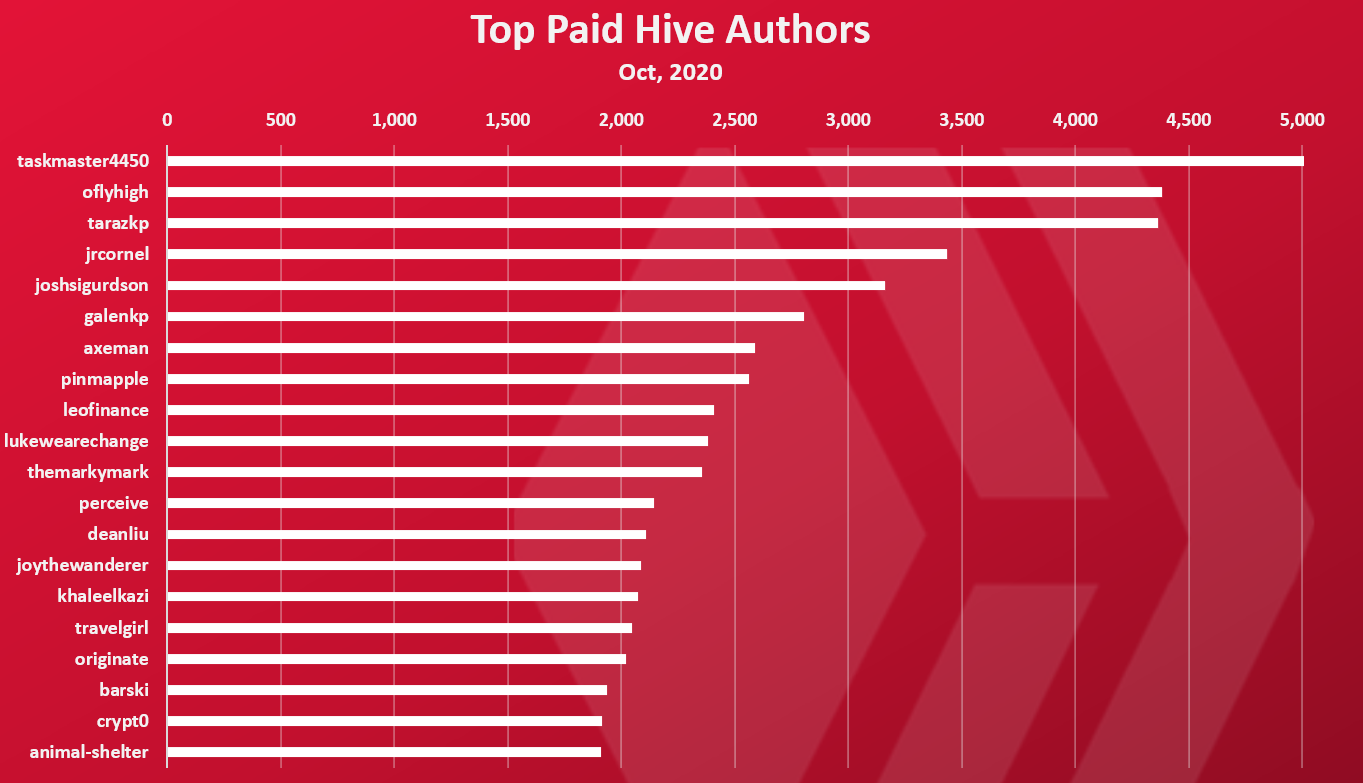 Author rewards are one of the most know in the blockchain as a lot of users are attract for them.

@taskmaster4450 on the top, followed by @oflyhigh and @tarazkp.

Here is the chart for the top 20 Hive curators that earned the most in October 2020. 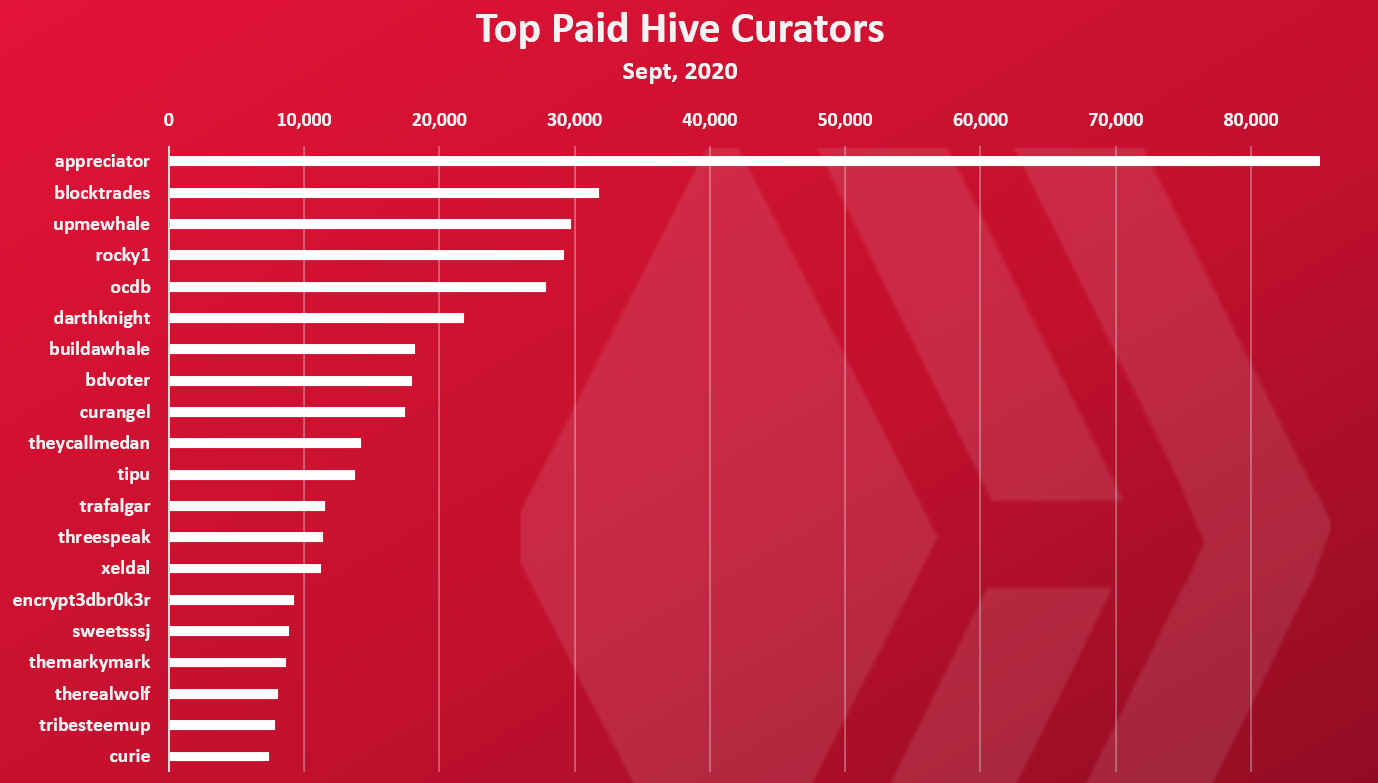 The @appreciator account has more than 8M HP with significant delegation from @freedom and it’s the largest account that is curating, ergo the curations rewards. It has more than 80k HP earnings.
Next are @blocktrades and the @upmewhale account with around 31k and 29k HP earnings. 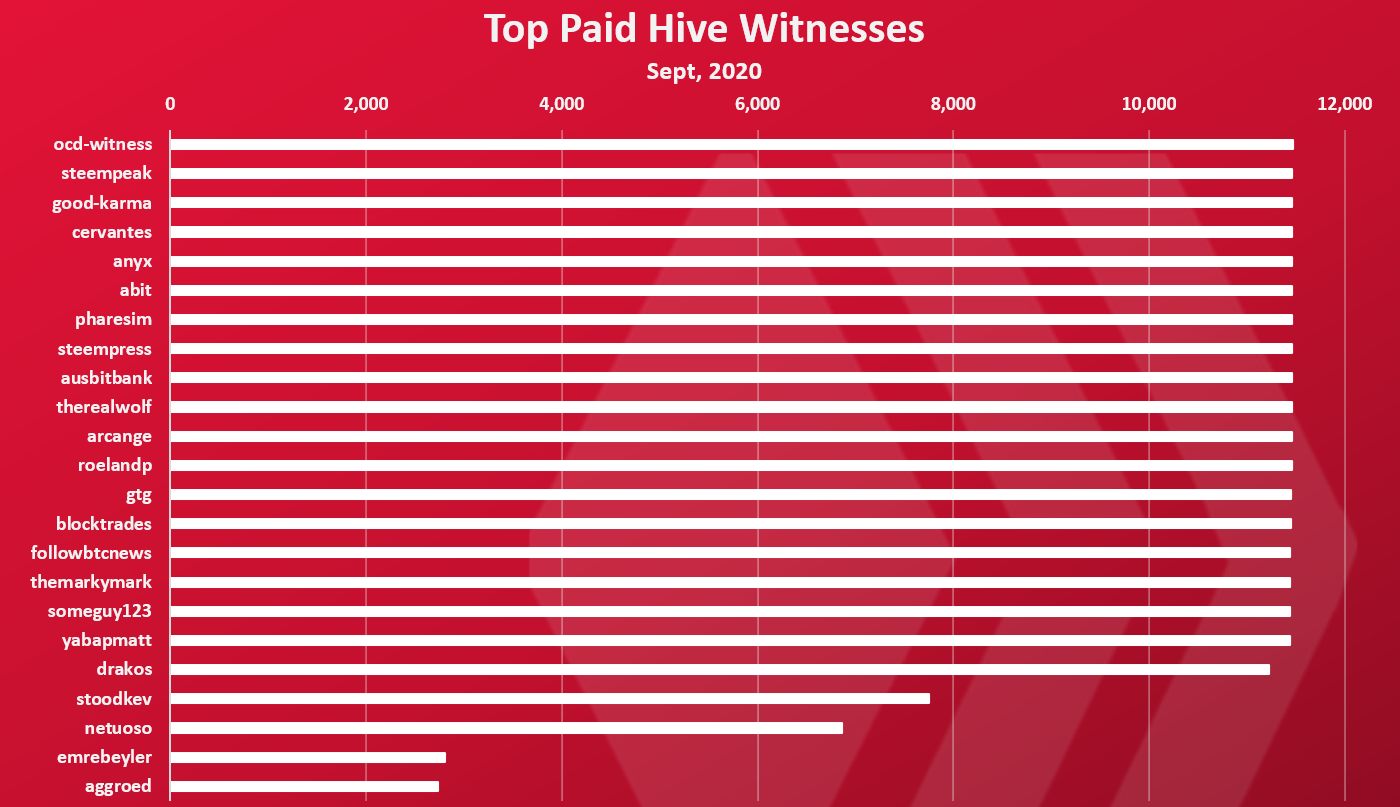 I have included more than 20 accounts in this chart to show the drop in earnings after the 20th spot. The top 20 are earning around the same amount of HIVE (HP), around 11k per month. 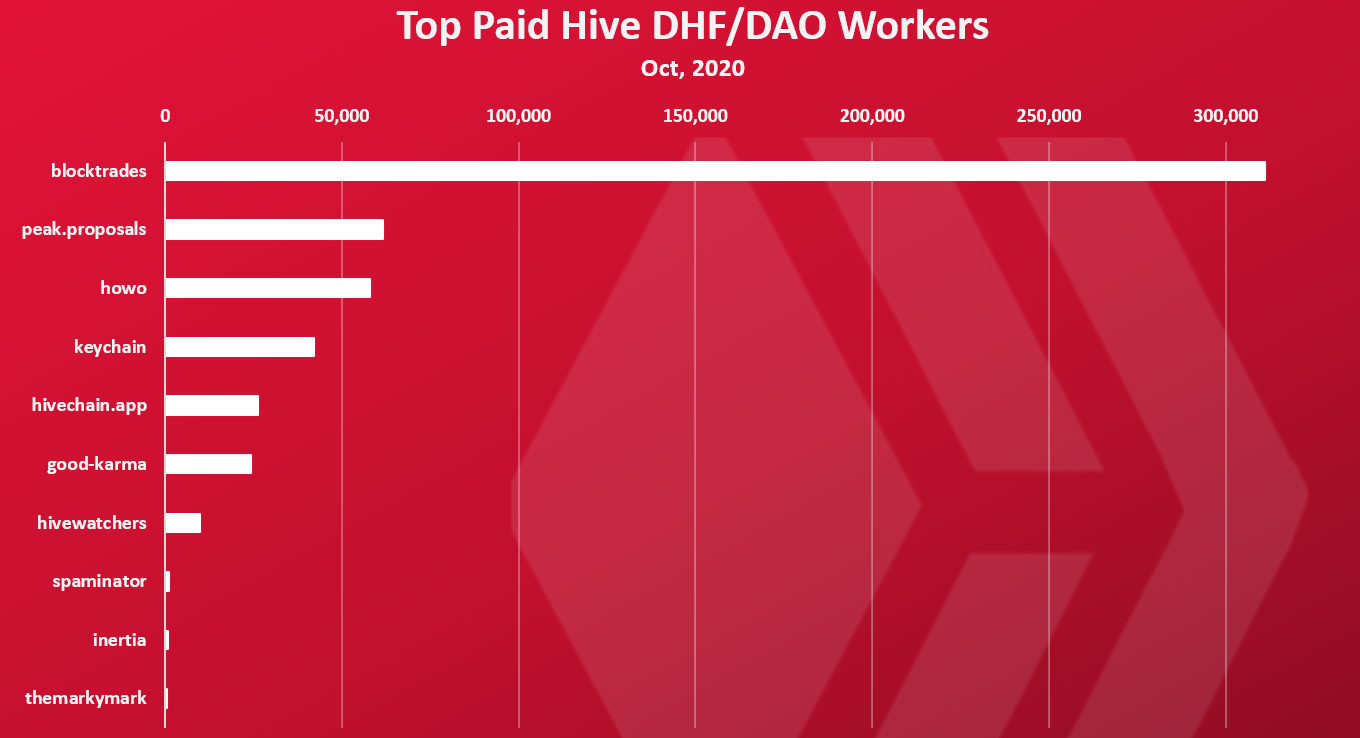 Note here that @blocktrades is acting as a middleman for the accounts that were excluded from the initial Hive airdrop. Funds are transferred to blocktrades and then they will be distributed to the accounts that were excluded by mistake.
@peak.proposals are second on the list, with more than 50k HIVE equivalent earnings. @howo and the @keychain proposals also on top.

From the data above we can compile the payout for a single ranking on overall top earners on the Hive blockchain in October 2020. 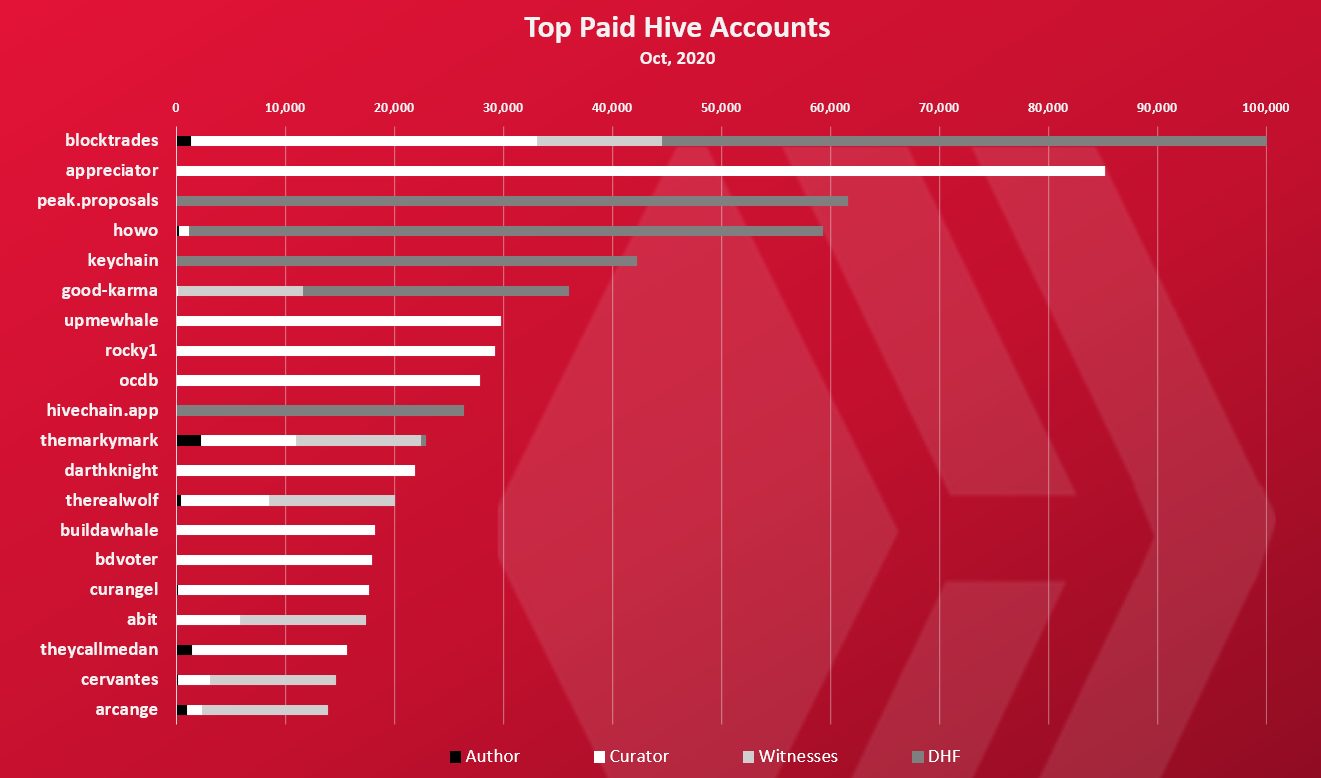 I have separated the different earnings for the top accounts accordingly.
@blocktrades is on the top, but with a note about the DHF funds for second hive airdrop. Next is @appreciator account with around 85k HIVE equivalent earnings, all of it from curation rewards. Peakd, howo and keychain next, all with the majority of the earnings from the DHF.

The author rewards are colored in black, and we can see that in the top earners there is not much from the author rewards. The top authors were around 4k to 5k per month, and the last on the list above, is just above 10k with earnings.

The curation and DHF rewards category are dominating the top 20 HIVE earners list.