The brand new LEO project Cub Finance has been on a great start in the last few weeks. The project started as a simple farming app with a roadmap for adding new features, some of which are already live. The most anticipated, The Bridge between ETH and BSC is yet to come in the next days. 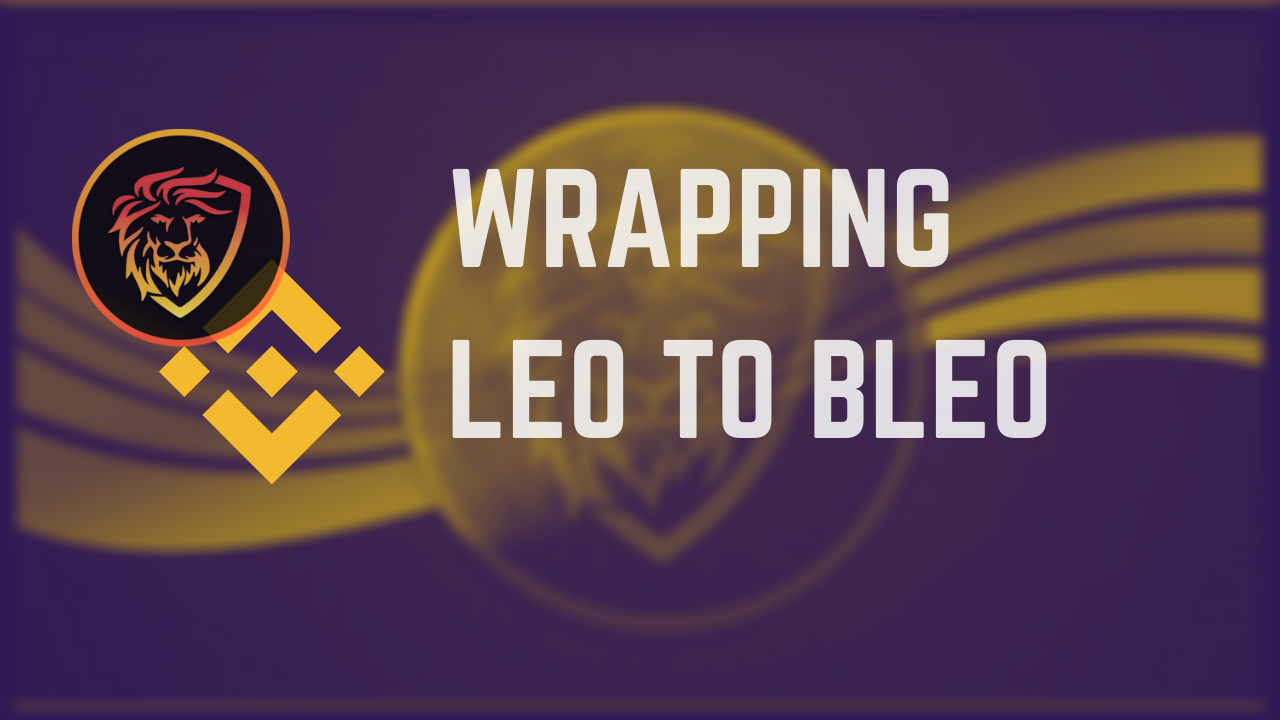 Cub Finance offers a variety of farms where users can pool and earn CUB. One of them is the bLEO - BNB pool that offers quite nice APR on pooling bLEO.

Since Cub Finance leaves on the BSC network, for users to be able to pool LEO they need to wrapped it first. The LEO team has made a nice tool for that https://wleo.io/bsc where users can go and wrap their LEO to bLEO and transfer it on BSC.

What is happening in the background is that LEO is transferred to the bLEO account, this info is then used to transfer the same amount on the BSC network. By tracking the transfer to the @b-leo account we can see how the wrapping is doing.

Here is the chart for the daily wrapped bLEO. 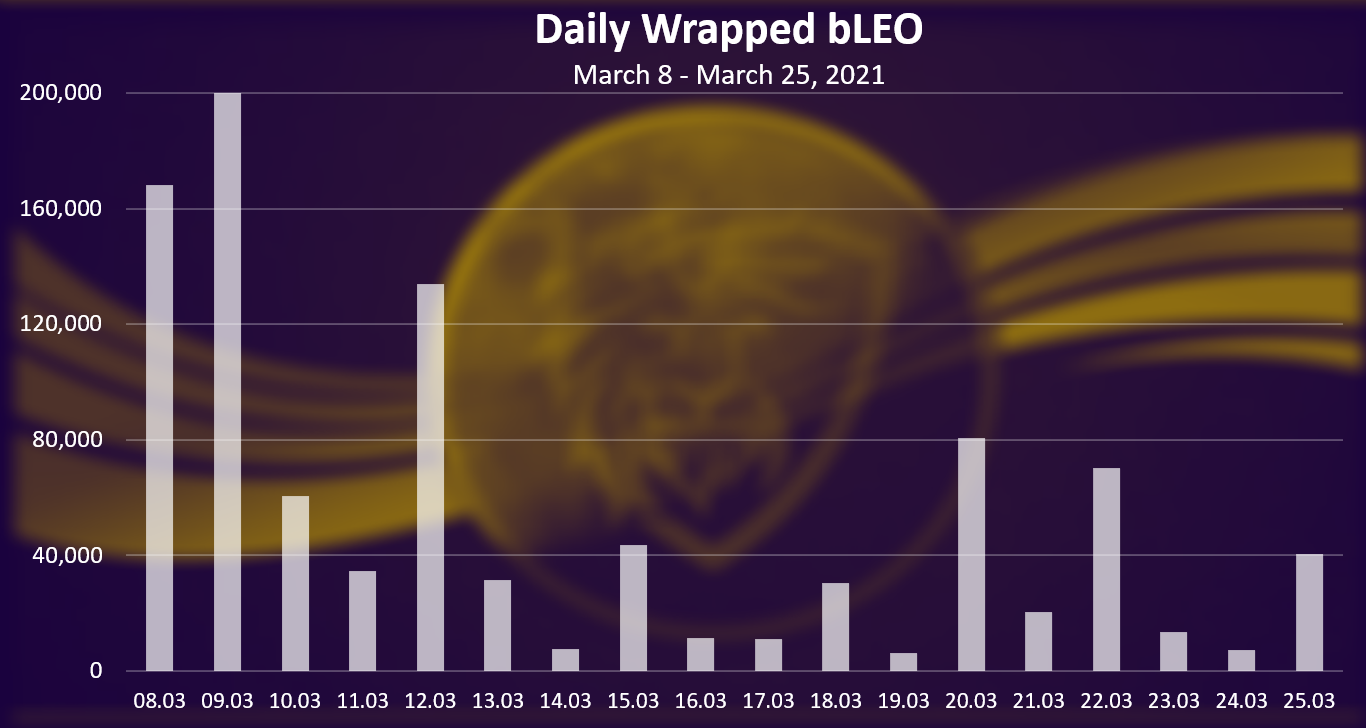 Note: Sometimes transactions are failing, and the tokens move around more then once. Because of this the data might not be 100% accurate.

In the first two days there was a lot of bLEO wrapped. A 160k on the first day and 300k on the second day. In the last few days the amount has dropped but we can still see a 40k wrapped on March 25.

With the launch of Cub Finance, LEO holders have yet another way to earn with their LEO tokens. We can see that at first there is a lot of tokens moving around until some equilibrium is found. A total of 1M LEO was wrapped in the period. But there was unwrapping as well. Lets take a look at those numbers.

Here is the chart for the LEO unwrapped, meaning transferring it from BSC to HIVE. 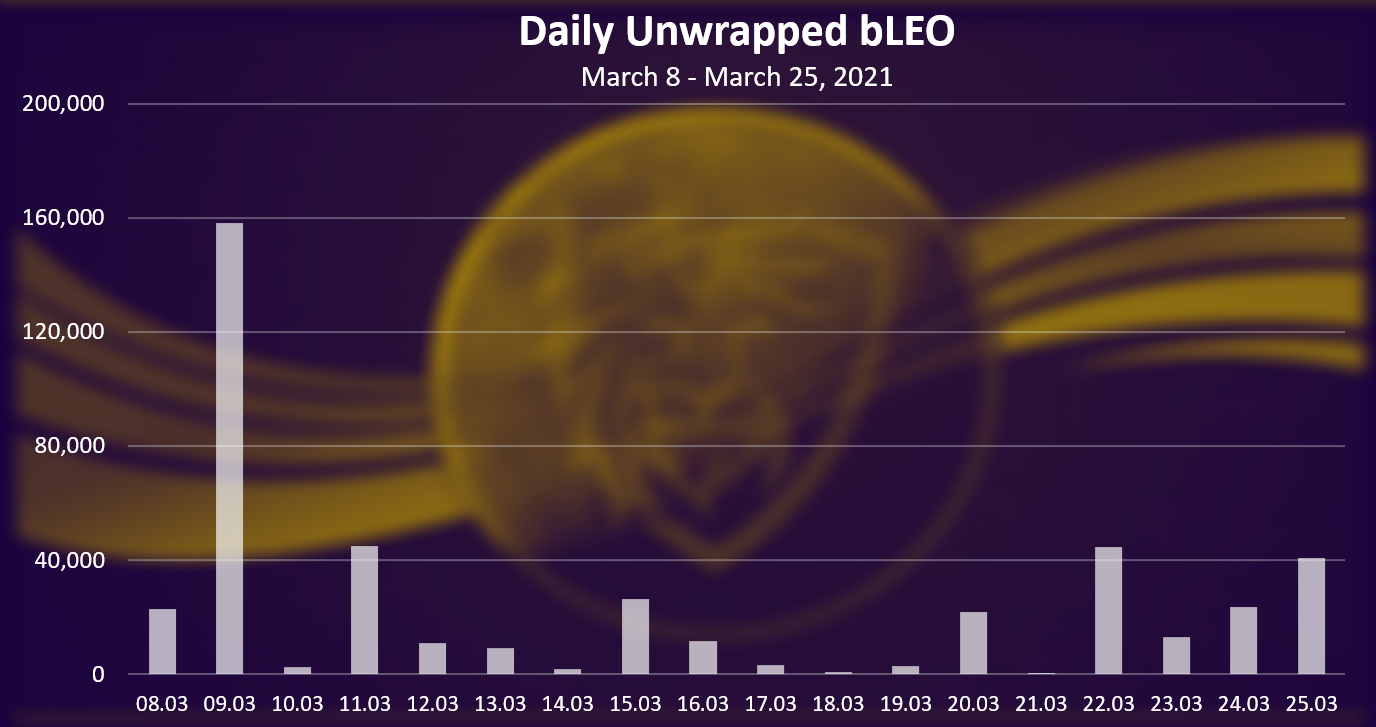 A lot smaller amount here but still there is some. The note for failed transactions and duplicate transfers stands here as well.

There was a large amounts unwrapping on the second day, but I think this is because of the failed transactions. Then some low amounts and interesting in the last few days we are seeing some larger amounts unwrapping. These transfers are most likely used for arbitraging opportunities, since LEO lives on ETH as well. A total of 440k bLEO was unwrapped in the period.

When put together the numbers above we get the cumulative chart. 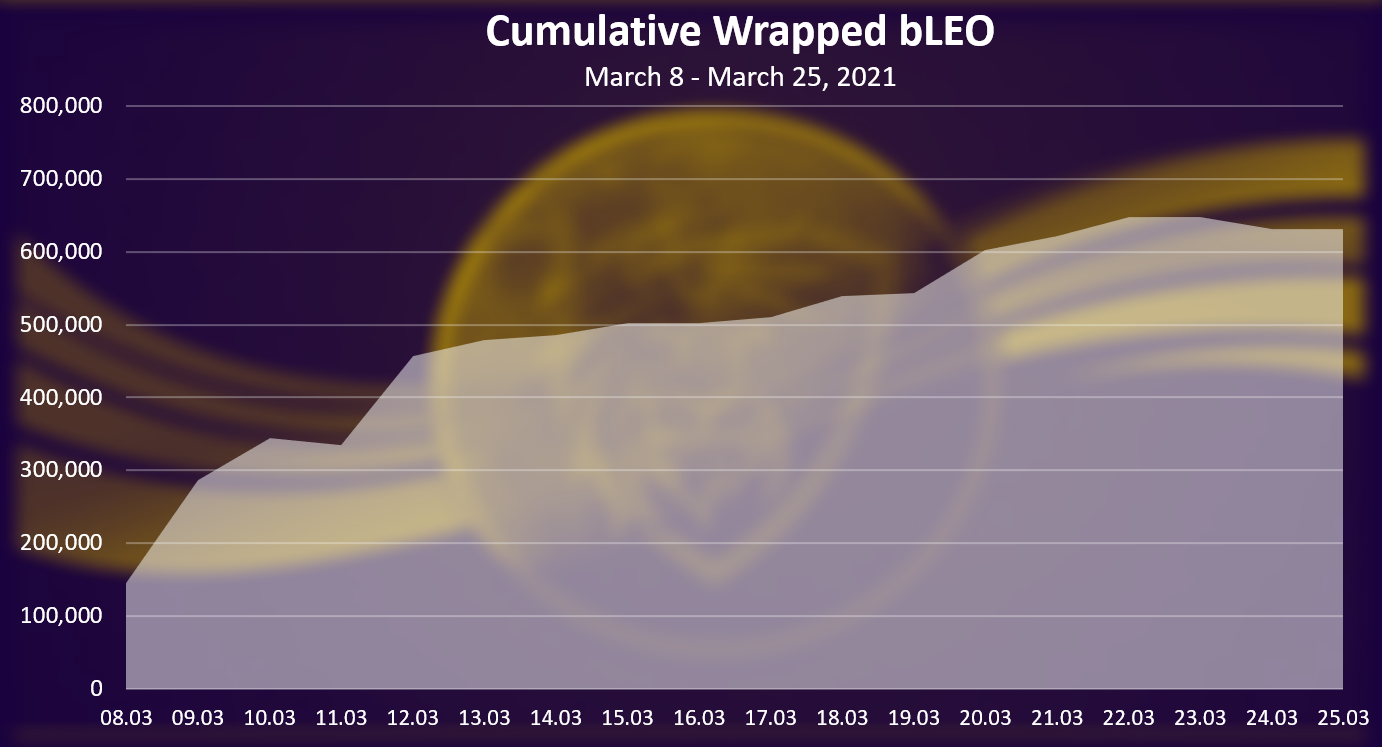 Overall we can see a constant increase in the amount of bLEO in the period, except for the last few days, where it seems that we have reached some top. As mentioned with LEO on ETH as WLEO and on BSC as bLEO, there is a lot of arbitrage opportunities now and those moves can influence the LEO allocations. 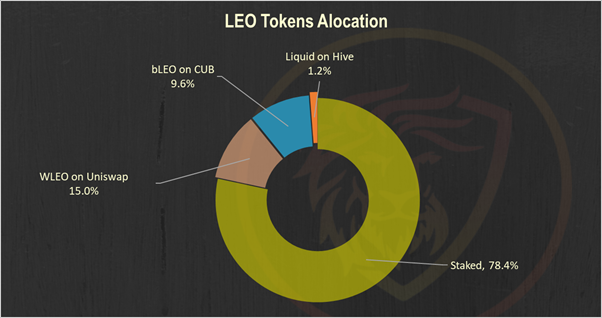 This is the allocation of the LEO tokens as of Monday, March 22.
Not sure how will things go moving forward, but I expect more LEO to move to the BSC network in the next week or two, and then we might see some equilibrium reached.

Who transferred the most of LEO to the BSC network? Here it is . 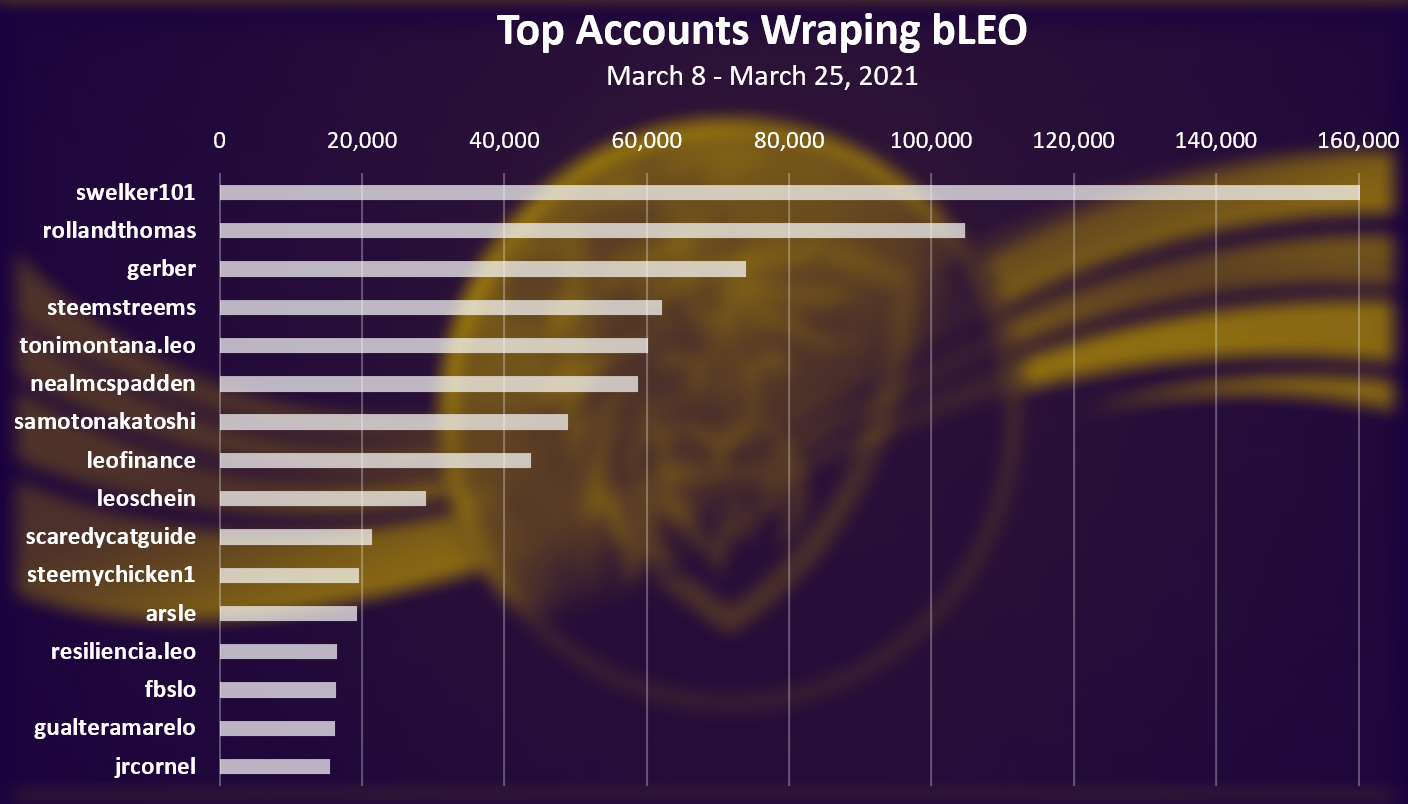 The @swelker101 account is on the top with around 160k LEO wrapped. Although this account is in the top accounts that unwrapped, so there were most likely failed transactions and the overall number is lower.

@rollandthomas is on the second place, with around 100k LEO wrapped. @gerber on the third place (arbitrage? 😊)

Here is the chart for the accounts that unwrapped bLEO the most. 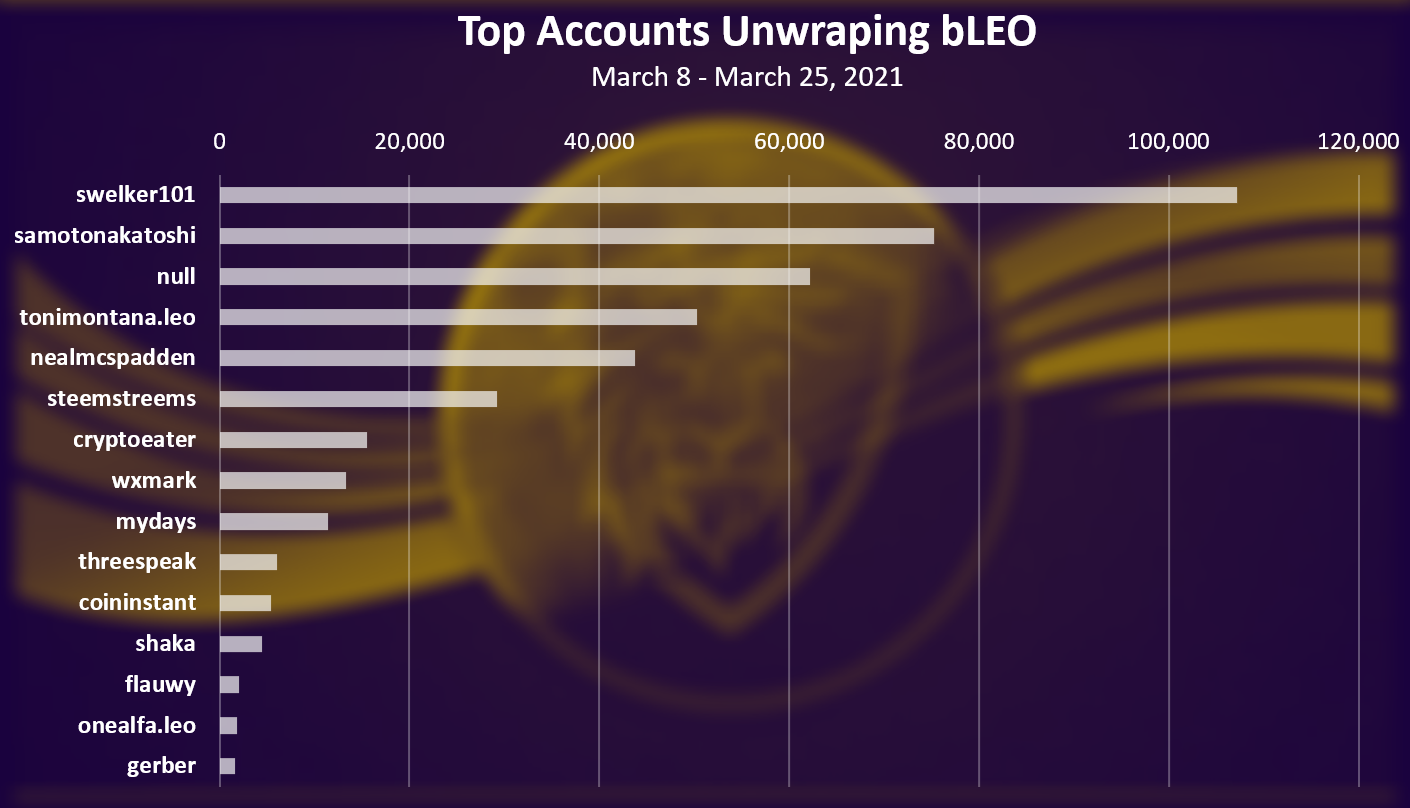 Interesting the @null account is third, this is basically the burns that are made from the fees earned. Just above 60k LEO were burned in the period. Some other names on the list, but there is doubts these transfers are also because of failed transactions and not real unwrapping.

Overall a lot of tokens were moved to the BSC network in a short period of time (around 600k), and it is expected a bit more to move there, because of the higher APR at the moment. The CUB price has been volatile as it has been expected for a new project.
The good thing is that this option will push the APR for LEO all over the place. The smaller the amounts of WLEO on the Uniswap pool, the higher the earnings for the remaining LPs there. Also, as more accounts are unstaking LEO on the native chain, the higher the APR for the ones who still have staked LEO and are using it for curation.