"Nothing is happening on Hive..." This is why you are wrong!

I spend an unhealthy amount of time on the internet and social media and sometimes you come across one or two people moaning just how nothing seems to be happening on Hive and I get it.

You jump on Twitter for a few minutes and everybody and their mother is shilling some shitcoin, Bitcoin, or Ethereum. You rarely hear or see the small crypto projects that have actual use cases dominating the news feed.

It is not exciting. That is why.

Nobody cares that your project is solving world hunger. Nobody cares if it is solving global warming. Hell, Elon Musk is promoting a meme coin as a payment system. Everybody is just trying to board the next 100X shitcoin train.

We are in crazy times people.

I recall feverishly when I was still new on campus and trying my hand at making money online. At that time, the in-thing was HYIPs or High-Yield Investment Programs. You would throw in a couple of dollars and earn an APR paid out daily or weekly. It was a scam, obviously, but it did not stop people like me from trying to make a dollar more than I put in.

Yeah! Those are your random modern-day farming DeFi projects like PussCoin rug pulling even the most seasoned yield farmers left, right, and center.

Now let's bring it back to the Hive blockchain.

Ideally, you won't immediately jump into Hive and become a millionaire in a few weeks or months. It takes time to buidl a reputation and eventually a financial stake which EARNS authority on the chain. 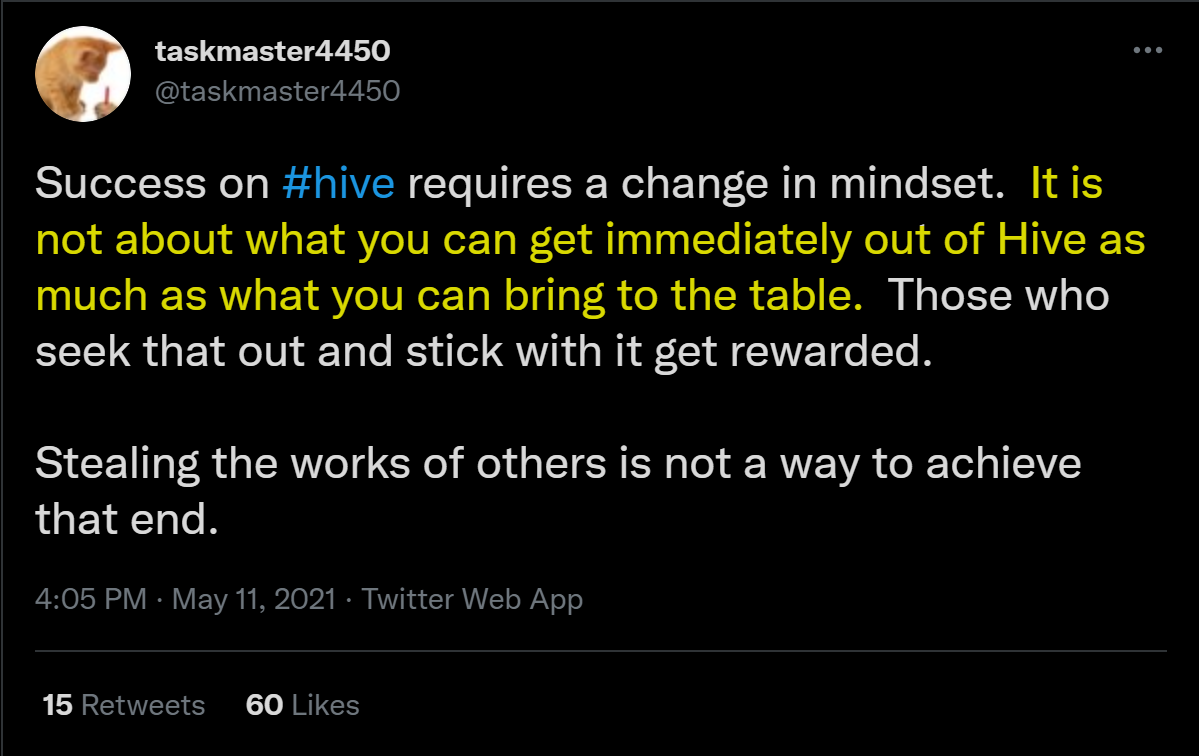 That is because you are interacting with real people who have their ideas whether good or bad. If you think about it we are like a small country trying to build a healthy democracy and we are slowly getting there.

However, that is not everything that Hive is all about.

Hive is an ecosystem of different applications exploring different emerging technologies and trends in the crypto-sphere and here is where the crux of the problem is.

Hive, being primarily a content-based blockchain, there is too much information flying around whose accuracy is sometimes questionable. Call it information overload.

We don't have a central figure like a Vitalik Buterin on Ethereum from whom we can source information. Therefore, updates and new developments often go under the radar until someone you follow reblogs it or posts about it themselves.

So, this my 'How To' guide on how to hack the Hive game.

It is brain-dead simple.

Simply follow a couple of individuals building projects and those sharing breakdowns and analysis regarding these same projects. I already mentioned one of them in this section.

While this small list is in no way, shape, or form exhaustive - I am sure I have left out some incredibly valuable contributors - these individuals have enabled me to be at the front of the line when it comes to investing in valuable crypto projects while they are cheap, like $RUNE.

Break down specialist. He always does a good job simplifying the robust technical details of various ongoing projects. Watch his 3Speak videos as well for visual learners like myself.

Twitter Marketing guru. Nathan will always retweet official Hive news and keep you in the loop about new developments on the entire blockchain ecosystem.

3Speak Co-founder and an ardent believer in decentralization. Dan holds some of the largest Hive bags and will rarely sell. If you need a kick-up the arse and a reminder about why Hive is more than a cash grab, definitely follow him. Get updates on the Speak Network as well while you are at it. You won't regret it.

Co-founder of one of the most successful Hive Dapps, Splinterlands, Aggroed has also helped birth second-layer tokens that brought about tokens such as LEO, POB, and SPORTS. He also helped develop Hive Engine where these tokens are traded. Have you also heard about the Diesel Pools where you can stake Hive-based tokens and farm yield?

Bloctrades is what Steemit.Inc should have been. He is more or less the person/team behind the development and maintenance of the Hive blockchain code. If you want to know about the critical code changes taking place behind the scenes, read a post or two. They may be a bit technical but at least you will know something is taking place. Are you aware that there will be a hard fork coming soon? You should.

Founder of the Leofinance Community. Khal and his team are some of the most brilliant minds on the Hive blockchain. Cubdefi.com which brought Yield Farming to Hive is one of his Leo babies. #Projectblank, or 'Twitter for Hive', will Soon™ be launching. There are the Leo Round Tables to look out for too. Don't miss out.

Self-appointed Leo Chief shill, Trumpman clues you into some of the most random coins you probably haven't heard of but somehow always pump a week or months after he mentions them. He scrapes the bottom of the barrel so you don't have to and with a curious sense of humor as well. Follow him and you too will surely appreciate his mad genius.

As I said, this is not an exhaustive list. If there is someone you follow and would like to recommend, the comment section is open for you. Just make sure you do not tag spam them.

Nobody, and I mean NOBODY appreciates a tag spammer.

You can use my template above and avoid angering some very cool and busy people.

Lastly, joining the Hive Discord and Telegram groups is a fantastic idea. Once you kill the non-priority notifications it becomes a perfect place where you can pop in and out at the end of a busy day and catch something new being shared there.